This is probably a bit of a self-indulgent post, but one of those small things that change your life happened to me back at the end of 1998 ... I picked up a copy of a now defunct Magazine called "Outdoor" and was captivated by an article titled "100 Things You Should Do Before You Die". 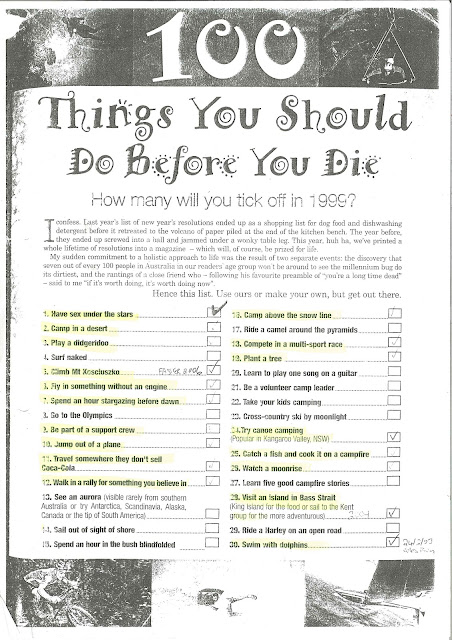 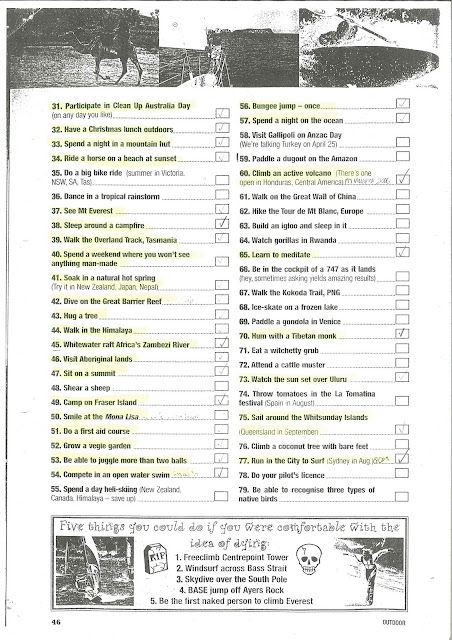 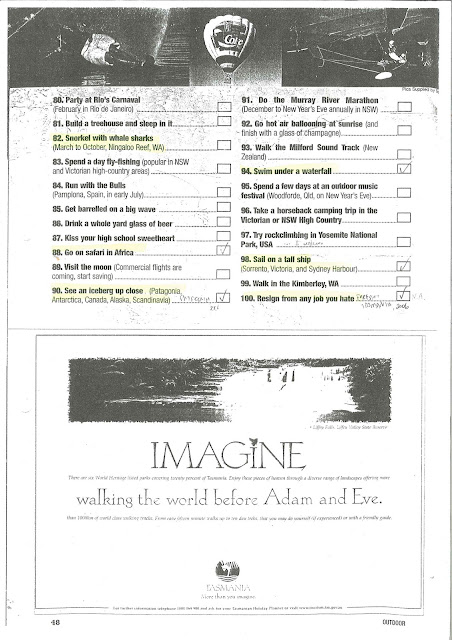 This was well before such lists were made popular by the movie "The Bucket List" starring Morgan Freeman and Jack Nicholson.

At the time it struck me as a cool thing to try and do most of the items on this list.  Over the intervening years not much in my life has stuck with me, but this list has followed me around from house to house, job to job, trip to trip, and although I'm not a slave to it, I've used it as a motivator to try new things, and I've slowly made my way through the list.

I'm over half way there (54 items by my count - those highlighted in yellow) and had intended on crossing off two more items in 2011 - #58 Visit Gallipoli on Anzac Day and #69 Paddle a Gondola in Venice. However, my broken knee put an end to that trip.

For anyone bored enough to have actually checked my count of 54 completed items, then you may have noticed that the ticked off items only total 53.  The reason for this is simple:  I only crossed off the 54th item right on the death nell of 2011, namely Bucket List item #91 Do the Murray River Marathon. 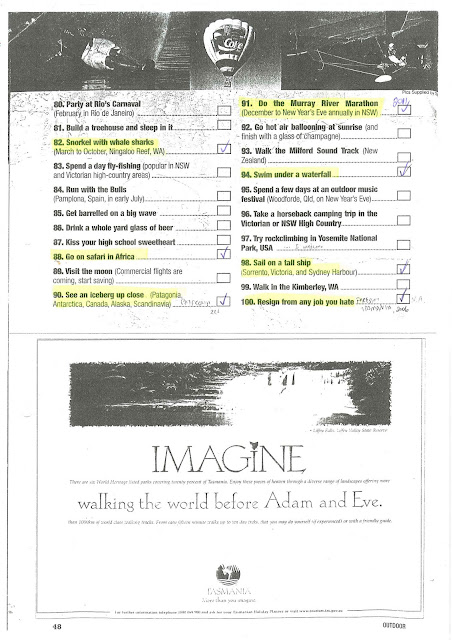 It's such a simple act, crossing off another bucket list item, but it is also so satisfying.  Truth be told, I take some of these a bit loosely, #91 being a good example as I have in fact only done the Murray Half Marathon, but in this case it was the experience which I feel I've had so I' m happy to claim it, and hey "my game, my rules".

In other cases I've been pretty harsh on myself - I've actually been to Yosemite National Park (#97) and spent three days hiking around inclduing climbing half-dome, but I didn't actually go rockclimbing so haven't crossed that one off, and I'm pretty sure I could claim #79 Be able to identify three native birds, but I bought a Tasmanian Birds book and want to be able to really be able to identify lots of native birds before claiming this one.

For 2012, I have my eyes on a few more items.  I think it's time to knock off #15 Spend an hour in the bush blindfolded, and I'm hoping to knock off #71 Eat a witchetty grub when I go to the Northern Territory this year.  I'm also hoping to get to Europe and knock off #62 Hike the Tour De Mt Blanc and #69 Paddle a Gondola in Venice, who knows I might even be able to get #3 Go to the Olympics if I go at the right time and take a detour to London.

I've also got #67 Walk the Kokoda Trail pencilled in for 2013, and maybe take a crack at #93 Walk the Milford Sound Track.

If you haven't tried it, I can highly recommend starting a bucket list, be it your own or by adopting someone elses as I have done.
Posted by Tassierambler at 10:58