Tonight, prompted by Kim, who was keen to get back on the bike after the Otway Shorty, we decided that rather than go home and veg out in front of the TV, we'd set off for a bit of a micro-adventure - an after-work ride around the river.


We basically just headed out along the intercity cycleway as far as Albert Road, then cut off down here, along Gormanston Road and then through Benjafield Park to Central Avenue.  We followed Central Avenue all the way to the end allowing us to then cross the busy brooker highway over the old railway overpass.

This dropped us off onto Gepp Parade (turning right carefully) which I much prefer to the cycleway as you follow it around the domestic / industrial coast onto Howards and then Goodwood Road.  Crossing Goodwood road at the lights, we cut right onto the barely used cycletrack up over the hill (most cyclists choose to just follow the smoother, gentler road shoulder) and onto the pedestrian / cycle path over the Bowen Bridge.

One final sprint along the East Derwent Highway to the turn off to Saundersons Road on the right, and that was pretty much our flat, fast warm up out of the way .. we were already over half way there.  How cool!

This is where my memory of the route got a bit foggy, not having been this way for probably 15 years, but it was simple enough to follow Saundersons Road around until just past Risdon Street, where we jumped off onto an obvious, but unsigned, coastal track behind a metal gate and found ourselves on some narrow single track skirting our way into Porters Bay and the East Risdon Nature Reserve.

I was very glad to see a sign at Porters Bay which banned dogs, cats, cars, motorbikes doing wheelies,  horses (but only fast ones) and fires ... pretty much everything except bikes ...  I approved. 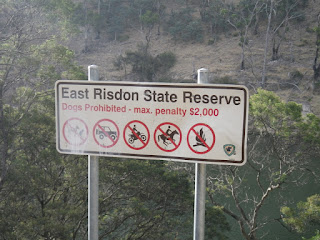 Just coming out of the bay, the track heads up the hill but a bit of single track continues to wend its way around the coastline.  We tried our luck with the coastal singletrack, and although nice riding, we quickly realised it was taking us to a dead end and so turned back and resigned ourselves to a bit of a push up the hill.

The track quickly branched, and having no idea which to go we randomly chose the right (straight ahead) fork and rode and pushed our way up the spur.  It was a good choice (thought the left fork may have been a better one), and we quickly found ourselves up on top of the ridge riding up through beautiful open bushland.


Ignoring a few indistinct tracks coming in from the left (one of which was the other end of the left fork) we came out at a T junction, turned left and hurtled back down another spur which ends next to a huge pylon.  There are some great views over the EZ Zinc Works and unusual views of Mt Wellington from here so we stopped for a look around and to snap a few pics. 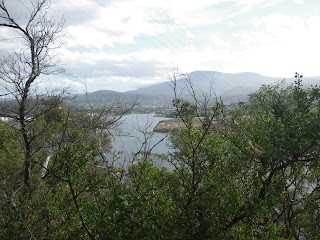 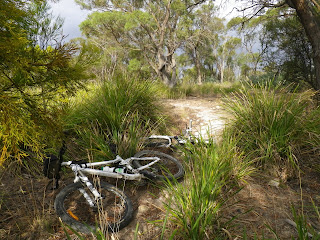 Backtracking 50 metres up the track, we took a right hand turn (left if you were coming down the hill) onto some obvious single track which we followed down into Shag Bay.  It was a beautiful track down, though not to be ridden with attitude ... coast and enjoy and be aware of walkers.  There was at least one big drop going down this way which needs to be looked out for. 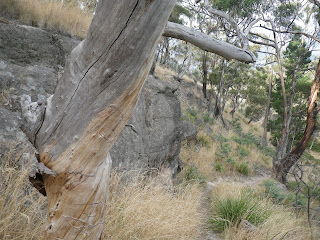 Crossing Shag Bay we found ourselves riding along a rocky ledge right on the coast.  I remember lifting my tyre up over one particularly nasty little bit, when I heard a terrified squawk behind me and turned just in time to see Kim slip off the ledge and crash down into the water below.
'Twasn't a pretty sight, but nothing broken and fortunately she was able to continue.

From Shag Bay it is a small push up a hill before you get onto the newly gravelled Shag Bay Historical Trail and from here it is a lovely ride back along the Clarence Foreshore Trail all the way back to the Bridge ... OK, so there are a few twists and turns, but basically all the way to the bridge.  Be careful not to miss the turn off the main concreate cycleway onto a small gravel track when leaving the Geilston Bay Recreation area - this track takes you right around the coast and is much more pleasant riding. 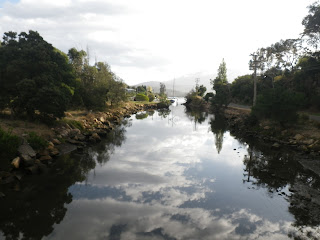 All up we covered about 28kms and climbed 350 metres in around 2 hours, and it was a simple ride straight from the CBD.

What really jumped out at me, not having done this circuit for 15 years, is just how much cycling infrastructure is improving in Hobart.  It's happening very slowly, perhaps so slowly that if you don't give it 15 years, then it doesn't seem like it is changing at all, but we are getting some pretty decent cycling paths and trails, and that's a good thing.