Over a year ago now, I bought myself an Electric Bike conversion kit from solarbikes.

It has been brilliant for that time, and I would rave about it as the perfect commuter bike, but then a couple of weeks ago I plugged it in to recharge ... and nothing happened.  After a nummber of phone calls to Matt, and trialing a number of other chargers and even another battery the verdict was that my old lithium battery was dead.

To his credit, Matt sold me a new battery below cost, and after a bit of fiddling today, I present to you, Electric Bike 2.0 ... 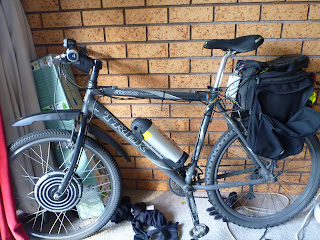 I haven't taken it out for a spin yet, but the electrics are a lot neater than in the earlier version (though still messy given it still uses the original controller), with less fuses to blow up, and even a nifty little button on top which shows you how much charge the battery has.  Apparently it is a much higher quality battery as well ... here's hoping.

The biggest upside I see with it is that whereas the old battery took up the whole rear pannier, I now have all this pannier space for carrying work gear and my shopping.  The big downside is that I can no longer get away with zipping past road cyclists on the way home leaving them thinking wtf?  I'm afraid the big battery gives me away too much ... the sacrifices we make.
Posted by Tassierambler at 20:21