When something goes wrong ... for example a person collapses on the street in a crowd, what is the first thing you'd do?

If you answered something like "rush over and see if they're ok."  then either give yourself a pat on the back (but only if something like that has happened to you and that is what you did) or get real.

I'd argue that the first thing most of us would do is either jsut try and ignore it, or look at everyone else and hope that somebody else does something about it.  It's only when that first brave person has stepped into the breach, that maybe we'll also jump in, but often even then we'll wait until 'the group' starts to act.  You see there aren't too many of us who are shirtless dancing guys or first followers ...

... though I kind of wish we were.  I believe that most of us hesitate on that cusp between doing what we know is right (jumping in and helping) and our fear of doing or getting it wrong.  Certainly I know I do.

I recognise that one of my personality characteristics is that whilst I am deeply conservative and restrained in most things, I also have this need to be the shirtless dancing man - to stand out and be different, to take risks.  It's largely self-destructive, but it's a need, almost a craving, deep inside of me.

Apple's 'think different' advert captures and explains this need to me at a very deep level.  It's a rejection of the ordinary:

I think it is why authors like Nassim Nicholas Taleb and Malcolm Gladwell also appeal to me so much ... they resonate with me at a very basic level when they write about the way we use 'hindsight' to incorrectly order and explain completely random events, and in Gladwell's case explains what happens in the tail of the probability distribution, not what happens around the mean. It explains the extraordinary.

The key thing I'm getting to is this: that shirtless dacning guy is a freak, most of us would laugh at him, and normally he'd dance alone until he jsut stopped; Steve Jobs wasn't a good 'leader' if you believe what you read about him (he was bossy, domineering and exacting), and the ideas of Taleb and Gladwell aren't the mainstream, in fact they're fairly unknown and far from accepted.

I think this is why I always struggle a bit when I attend leadership courses (and I probably should have prefaced this whole blog with the comment that I was on a leadership course for two days this week).  It seems to me that we pick traits we see in leaders who have been good, but forget that that may not be why they were good leaders.

This was all meant to be a short introductory preface into a blog about my Snake Island paddle, but I think it has now turned into a blog all by itself.  What I wanted to say about that weekend (and I will probably expand in my next blog entry) is this:  A group of seven of us were paddling down to Snake Island this weekend, and I was off to the side of the group in my own little world as I so often am, when I heard a whistle blow behind me.  I turned around, and there was Greg in the water, with all of the other paddlers continuing off into the distance. 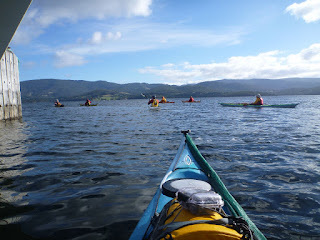 ... and no, I didn't stop to take this photo before doing anything about his predicament.  In fact any hesitation I had was momentary, even though a part of me strongly suspected this was a training exercise (there's that little voice that gives me the excuse to do nothing "it's only a training exercise, someone else will respond") .  Instead I called out to the rest of the paddlers to stop (interestingly two didn't despite my frantic pointing behind them, instead they just looked at me and where I was pointing then carried on paddling forwards) but once I had done that, I immediately turned my kayak and paddled as hard as I could to get back to Greg and assist him get back into his boat.

Sure, even as I was doing this I realised that the most likely scenario was that it was an unneccesary effort, but that was OK with me.

In fact it was more than OK, because as one or two others in the group realised what I was doing, they too eventually turned and started to follow me back to Greg, and by the time I got there, everyone was heading in his direction ... after all to not do so would have left them outside the group.

For a brief moment (under my life jacket, kag and thermals) I was the shirtless paddling guy, and I liked that.