You know how sometimes what can seem like a disaster turns out to be a real boon? 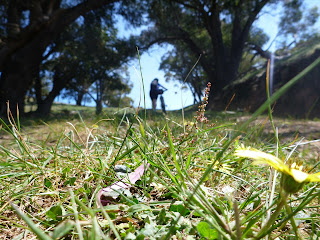 Well this is what happened to us at the end of Day 3.

You see Kim's rack breaking suddenly created a problem that we had to solve: how could we ride to Bendigo with all our gear and a broken rack?

First option considered was that we wouldn't, we'd just catch the train back from Castlemaine and say "well we tried, but luck was against us".  Whilst secretly thinking "Thank God, one more day would have killed us".

However, this line of thought made us realise "Hang on, there's a train station here at Castlemaine ...", and sure enough it was the same train line that continued onto Bendigo.

I'm guessing you've either figured out where this line of thought is going, or you are sitting there thinking "God you're dumb, you really needed the five minutes it took to figure this out?".

Yep, we arranged with our hotel (the Campbell Street Lodge) to store all our gear for the day, and we rode to Bendigo with just us and our bikes (Super Yay!). 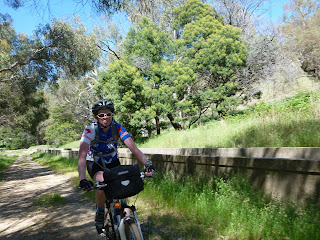 Our plan was to catch the train back from Bendigo to Castlemaine, race up and grab our gear, and then catch the next train down to Melbourne.  Easy.

In hindsight we realised we could have done this on the first day as well and is something I'd consider doing for the whole route (you could use bus services to do the other gear shuffles I think) just because it would make the riding more fun.

The other advantage about this is that when I convinced Kim to wander down to the train station just to double check the route, we then discovered (from a giant poster outside the station) that the trains weren't actually running into Melbourne on Sunday due to track work.

Now whilst this wasn't a great problem for foot passengers as they just took a connecting bus,  it was a problem for us as the replacement buses didn't take bikes.  Not so good.

This was obviously something that would have been very useful to know several weeks ago, as we had a flight out of Melbourne on Sunday night.

To the great credit of Vline, when we went inside to plead our case, the young lady attendant didn't just say "well, it was on our website if you'd checked".  Ok, so she did say that, but then when we explained we were dumb Tasmanian's on holiday (I did this explaining as Kim doesn't really have a very convincing dumb Tasmanian accent) and hadn't thought to do this, she then took pity on us and undertook to try and get us on the buses with our bikes.

We agreed the specific train we wanted to go on, and when I went back there the next morning she had phoned and faxed through our request to the bus companies so they were expecting us, and all we could do from there was cross our fingers, ride to Bendigo and hope it would all end well. 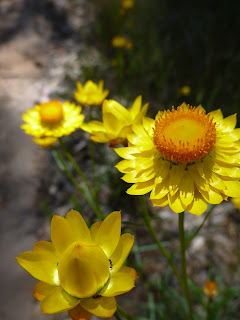 I don't know about your universe, but it does in mine.

Today's ride on the Leanganook Track was meant to have a few steep climbs in the first 15 kilometres, but (as the riding route bypasses the Mt Alexander climb) after that the profile looked to be mainly downhill and pretty flat, and to be fair to the guide this time they were pretty well spot on.

The first section to Speciman Gully Road has two decent climbs, and when we rode it, it also had quite a few unsigned junctions (thank God for the GPS track) but although I may have huffed and puffed a bit lot (and cursed the ease with which Kim now scooted up the hills in front of me having lost the pannier disadvantage)  I still really enjoyed this section because in my head it was the last "rough" section before we hit the water race and cruised the last 40km into Bendigo, and to be honest it was pretty fun riding. 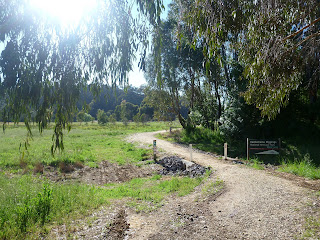 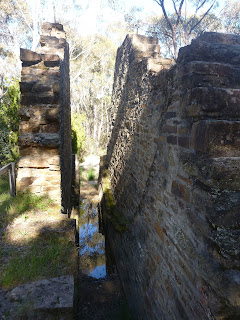 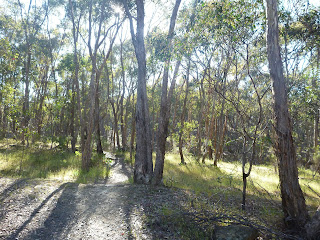 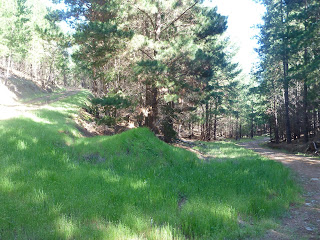 Turning left onto Speciman road led to a wonderfully fast downhill run for several kilometres before a bit of bitumen riding over Calder Highway and into the town of  Harcourt which was the first place we came to in between the main towns which actually had services -  a small general store/cafe and a BP service station.

Two large milkshakes later we were loving this day.

The road continued around the base of Mt Anderson, with one last little climb over the foothill, and then down to the start of the water-race. 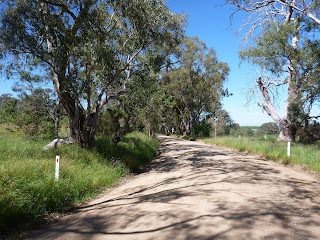 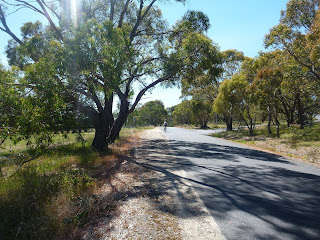 The next 20+ kilometres predominantly followed a water race down into Bendigo, and other than two little climbs (OK, biggish climbs) where the water race went through the hills and we had to go over, and one other little section which diverted off onto some single track to go past a campsite, the riding was pretty darn cruisy.  With blue skies, lots of wildflowers and Bendigo not far away life was just good. 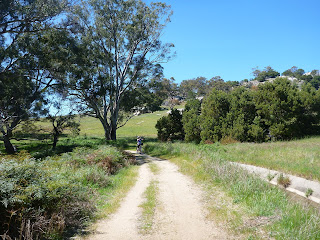 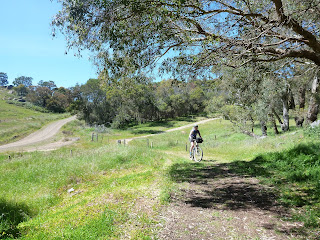 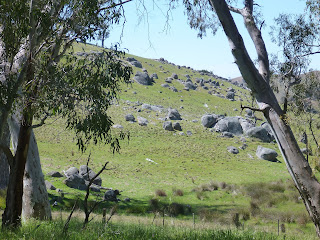 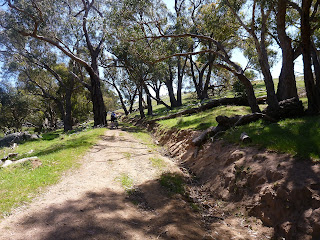 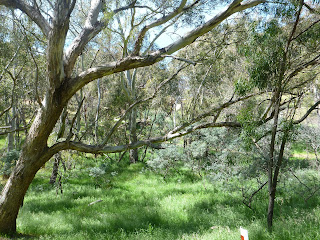 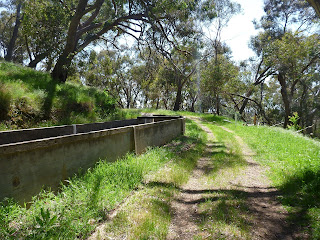 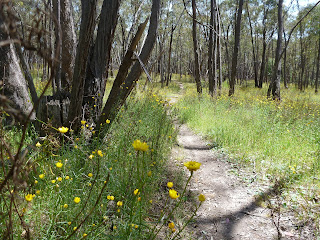 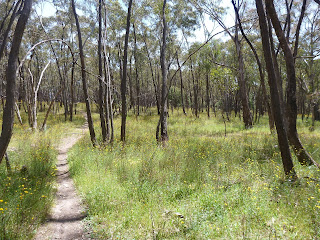 It was just after we came back off the single track that we came across a checkpoint for a mountain bike race that was being held on the trails we were riding and we stopped and had a chat to the rather bored guy that was sitting there.

Not long after this we left the water race and started our final bit of riding into Bendigo itself.

The final kilometres have a few undulations, there's no denying it, but nothing major and so we decided to skip the subway lunch we'd packed in favour of an early arrival at Bendigo and a fresh lunch and ice cold drinks.


We arrived in Bendigo well ahead of when we expected to arrive and had plenty of time to catch the 2.30pm train back to Castlemaine (I was pleased to find we could jump off one train and onto another for the same fare as going straight through)

We decided to pack our bikes into our bike bags in Castlemaine station as this would guarantee us getting them onto the buses, and we managed to do all of this with plenty of time to spare in the 50 minutes between trains. 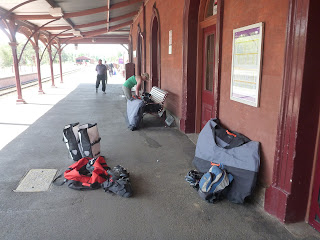 It was however here that I discovered my squashed can of tuna and beans, and let me tell you it was hard to get it out from where it had wedged itself (and one week later I still haven't got the smell out of my gear). 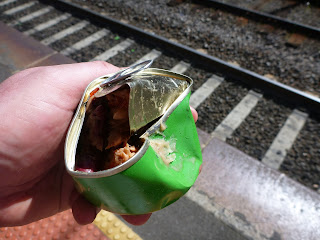 By 6.30pm we had made it back to Melbourne and out to the airport, checked in our bags and were sat down in the Irish Pub there having dinner with a couple of friends waiting for our flight home.

By midnight we were showered and in our own bed ready for to head to work in 6 hours time ...