You know how you sometimes wake up sharply with a random thought, like ... "Oh, sh*t, I forgot to pay that hydro bill last night.  Well that exact thing (except I don't think it was a hydro bill) happened to me just the other week.

Anyway, I decided that I had better pay whatever bill it was before I forgot it again (as you can probably pick up again here, a few days later I have completely forgotten what it was), so I stumbled downstairs, logged onto my computer ... and paid it.

Then, somewhat inexplicably, I went on and ordered nearly $400 worth of bikepacking gear. 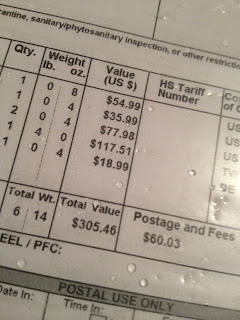 I have to admit that this was rather random, even for me.

Oh, and if you're looking at that picture above and thinking "that's only $US305.46", the four hundred dollars comes from the postage ... they charged me $US80.50 for the postage and handling.

But all that randomness and cost pales fades away when one of these beautiful things arrives ... 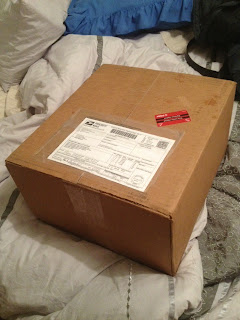 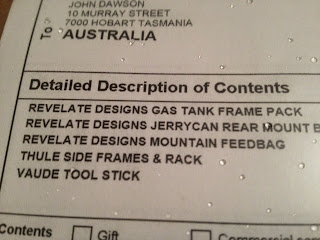 Now there is actually a reason for these purchases.

I'm still dreaming of a bike-packing holiday in Europe this year (and yes, if you're wondering, the plunge in the Australian Exchange Rate did occur immediately after my deciding that yes, I am going overseas this year, so you have me to thank for that).

So I've been thinking a lot about which bike to take and how to set it up, and I'm now moving into the "OK, need to start acquiring things" stage.

One of the things I learnt on my west coast trip, was that because I have a full suspension mountain bike, and can therefore only fit a small frame-bag onto my bike, I have to carry quite a heavy backpack to take all the gear I need, and this won't work for me on a longer trip.

I also learnt from the trip that Kim and I did along the Goldfields track that some of my bulkier stuff, like my airline bike bag, won't fit into my bike bags.

So, I've been thinking two things:  (1) I needed every bag I could possibly fit onto my bike to get stuff off my back and (2) I need a way of carrying my bulkier stuff.

I have however been balking at the prices for these bags (eg. $60 for a bag that is only large enough to carry a camera)  ... until my little spending splurge the other morning that lead to my ordering Revelate Design's  Jerrycan, Gastank and Mountain Feedbag (x2) so that I can put as much weight as possible on the bike, not on my back ...


However, this still doesn't fix the 'bulky gear' like my iPad or Netbook (haven't decided which one to take yet) and my Ground Effect Body Bag.  That's why I also bought one of the new 'Thule' tour racks to see if this could solve this problem.


These racks are designed to fit on virtually any bike (except maybe mine - as I've now discovered) and I'm hoping to fit these to the front or back of my bike with some small panniers so that I can put my airline bag, tent and a few other bulkier items in or on it so I don't have to carry anything on my back.  Essentially I hope to get to something like this ...

Sorry it's such a small image (visit http://www.revelatedesigns.com/index.cfm?fuseaction=gallery.gallery&Categoryid=6 to see proper image) but the idea would be to have a rack to put my bulkier gear on for most of the riding, but with the option of moving it onto my backpack if needed when doing rougher single track trails.

I've also just ordered a Topeak MTX BeamRack as another option in case the Thule Rack doesn't work out (though I have concerns that this will not be compatible with the Revelate Designs Viscacha Seat bag I will use) , and as I've decided to use ViewRanger for much of my navigation (alongside hardcopy maps and guides I'll pick up along the way), I've also ordered a LifeProof case and mountain bike holder for my iPhone as these get pretty good reviews for keeping out water and dust. To be honest, I'm not really sure how this will all work out, and that's kind of the fun of it (though I may need reminding of this when my phone is broken and I arrive at my camp one night to find half of my gear has fallen off my bike).

So this is the discovery I've made: I just have to get into the habit of getting up early and buying these things before I have time to think about it.  Speaking of which, I really do think I might need to order myself one of those internal hub generators so I can keep my ipod and GPS charged ... don't you think?

I might just sleep on it and see how I go in the morning.