I spent last night tossing and turning in my tent trying to remember how this ever seemed like a good idea. 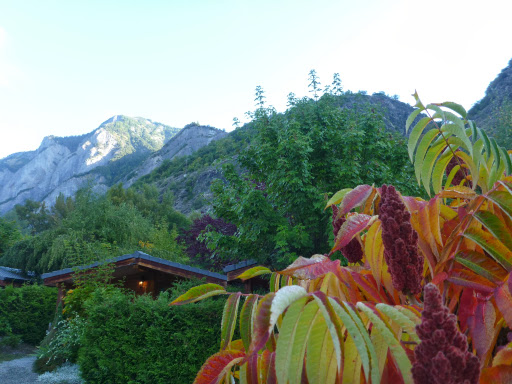 I mean I know it seemed like a brilliant idea back in Tasmania when I thought I'd just tootle around the alps for a few weeks, build up some fitness, then I'd go ride up Alp D'Huez.

Yea, that seemed like a really cool idea from the other side of the world.

But in the last week, as I've got closer and closer to this famous climb, the idea has seemed less and less brilliant.

With just twelve hours to go it has seemed idiotic, if not impossible.

Confessedly my doubts reached a crescendo when I arrived at Bourg l'Oisans to find myself surrounded by riders all wearing team colours and all riding the latest and greatest road bikes with their support vehicles in tow, whilst I dragged my battered bike out from underneath the public bus and squeaked my way down the road looking for a campground, with my gears randomly jumping up and down whenever they felt like it.

But, despite all the doubts, I was here, it was only 14kms, and I figured that even if it took all day, I could at least make the effort to ride up there.

So just after 9am this morning, having had a small tub of yoghurt and half a mouthful of orange and banana juice for breakfast (a mistake purchase that was awful), I turned my wheels towards the start of the climb and set off. 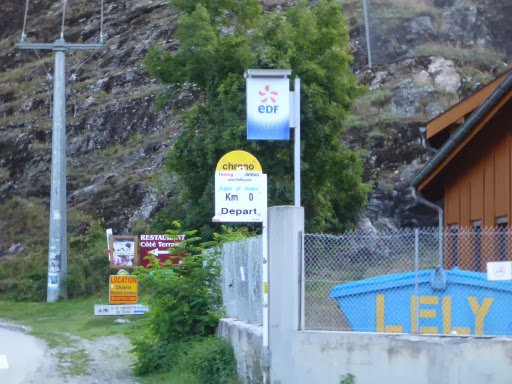 Now I had set myself three progressively harder targets during the night.

That third goal lasted all of about three minutes. This was a steep climb.

At about the same time that I changed into granny gear, in fact I think it was as I was looking down at my drive chain thinking "No, there must be more gears than this, there must." I got overtaken for the first time ... 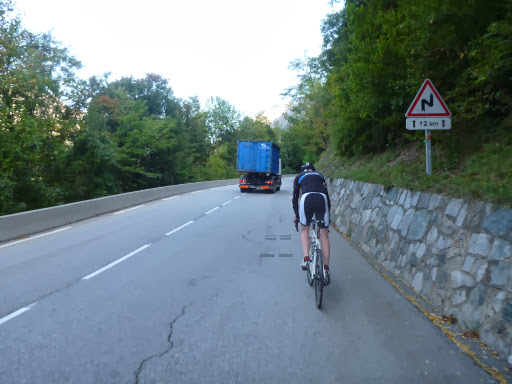 I will confess that the thought of slinking back to my tent site did occur at this juncture, but then I also saw the first corner coming up and I could picture in my mind the many times I'd seen it on TV and I have to admit, I got a little bit excited about being here. 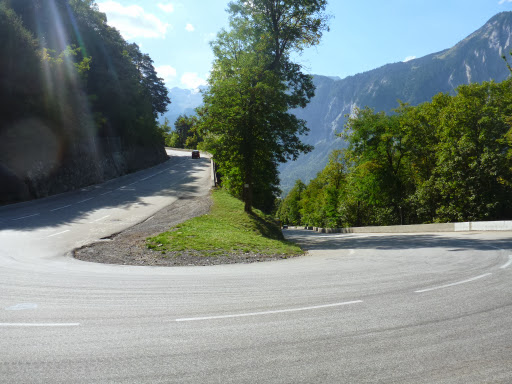 And no I didn't stop and take any of these photos, so I still had a chance at target two.

By bend two or three, I was starting to suspect that I wasn't just in a steep part of the climb, but that in fact the whole climb was going to be this steep, but on the flipside, my legs and lungs had warmed up and I was starting to feel good.

In true John fashion I had however gone from wondering if I'd make it to the finish line, to trying to decide on my victory salute as I crossed the finish line ...

As I was pondering my possible salutes my Garmin GPS beeped indicating that I'd clicked off another kilometre, so I glanced down ...

I had done 2 kilometres..

With 12 kilometres still to go, even I knew that I was getting a bit ahead of myself, so just tuned back into the here and now setting my sights on the next corner. 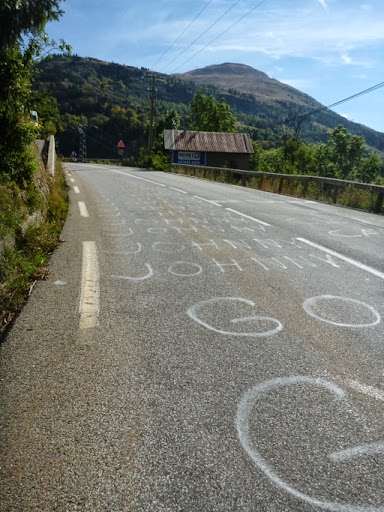 Now in some ways it's a nice climb in that at any one time you can only see so far ahead, and therefore someone like me can constantly ignore all evidence to the contrary and delude themselves that maybe the top is just around the next corner, or over that next rise.

For instance, about 3 or 4kms into the climb, I came around a corner and saw this wonderful set of switchbacks heading up the mountain and I thoroughly convinced myself that when I watched the riders going up here on the tour, that the finish line was just there at the top ... I was almost there! 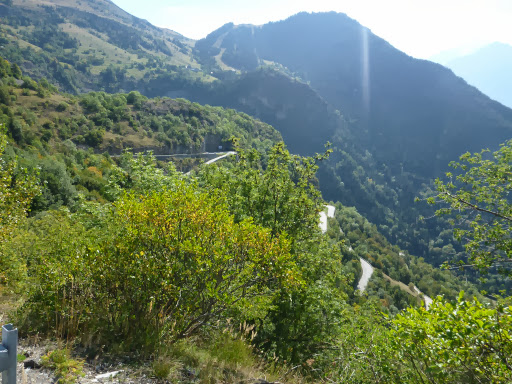 I was of course widely wrong, but it did give me hope.

Well over an hour into the ride at this point, and having already pulled out the first of my secret weapons ... A chupa chup, I came around the final switchback on the second set only to find a small church (probably for people like me who gave up and died at this point) and there aways away in the distance still I could finally see the Alp D'Huez village.

It still seemed an awful long way away.

So I carried on climbing. 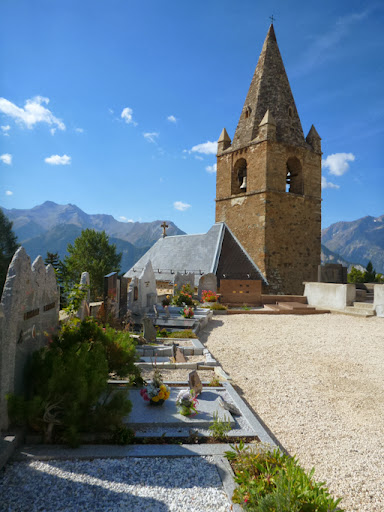 At about 8kms I started to be convinced that I would make this ride without stopping ... just so long as nothing went wrong.

I then started obsessing about getting a flat tyre or my gears jumping forcing me to stop.

At about kilometre 9, just as I was calming down again and enjoying the ride I heard what sounded like the unmistakable twang of a breaking spoke.

I couldn't believe it.

I kept pedalling but looked furiously down at my front and back wheels trying to see or hear a moving spoke ... But I couldn't see anything and both wheels looked to be true. Trying to imagine myself lighter, I continued upwards and a few minutes later convinced myself that what I had heard was just one of my many gear jumps and my over active mind.

I really wanted this ride to be continuous at this point.

Finally I passed through the lower village and based on the switchback count which was down to four (the switchbacks are numbered from 21 to 1 in reverse order so you know how close you are to the village) I could look up and see how far I had to go.

At the second last switchback, there was a guy taking photos, and after taking a half dozen photos of me, he still had time to put his card in my rear pocket and give me a push.

Which was kind of embarrassing.

Around about this point as well I encountered an unexpected problem ... I started coming to junctions and not knowing which way to go. 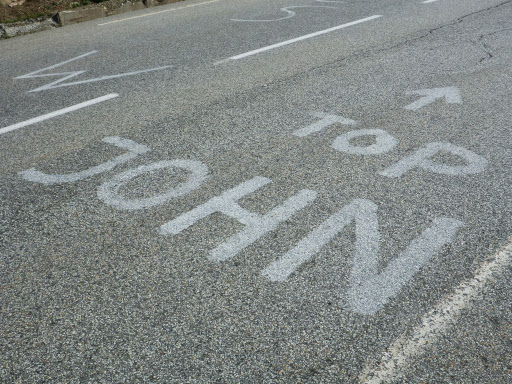 I can tell you I was very keen not to ride up any unnecessary detours, but fortunately most junctions either had a "itineraire de tour de france" sign on them, or failing that I just followed the road which had the writing plastered all over it. 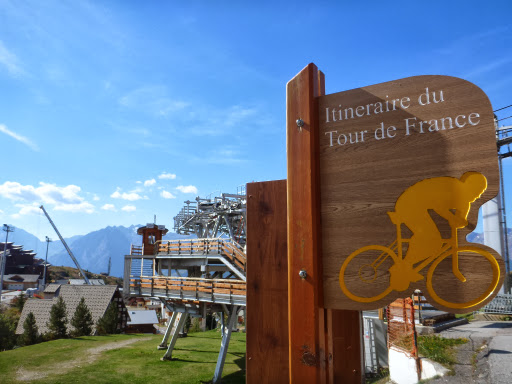 Finally I rounded switchback one and set off up the final haul to the finish line ... 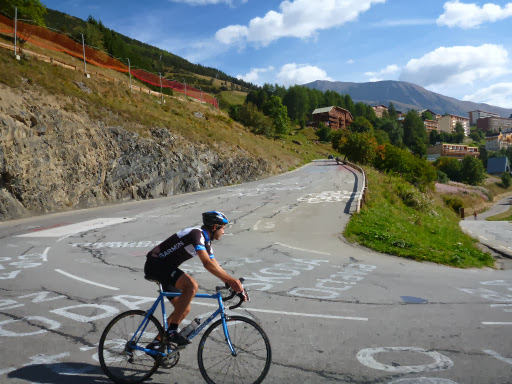 It was a long haul this one, but then I came into the buildings, the road started to flatten out, I started to see flags ahead, then a Trek sign, the cafes ... God darn it, I saw everything except something that looked like a finish line.

Which left me in a quandary ... Had I finished or hadn't I?

Dare I put my foot on the ground?

I decided that it was too much of a risk, and without any better options ... I just kept on riding up the hill.

The road headed around another switchback, then under an underpass thing (that seemed to ring a bell) and then continued onwards through what now seemed to be some obscure little backroad. But there was a bit of graffiti on the road still and I couldn't risk stopping early so I went around yet another switchback and finally saw a sign ahead of me announcing that I was still on the Tour de France course.

300 metres up the road though, I hit a roundabout, and the route markings seemed to indicate I go straight through it into a car park ... This didn't seem right, but I decided to try it (heavily swayed by the fact that the car park was flat and the other options were to either head straight uphill or straight downhill) and sure enough at the other end there was another sign indicating just 300 metres to the finish line.

I have to confess, I did change up a gear and make one last effort to the line, so that the crowds could appreciate my efforts ... 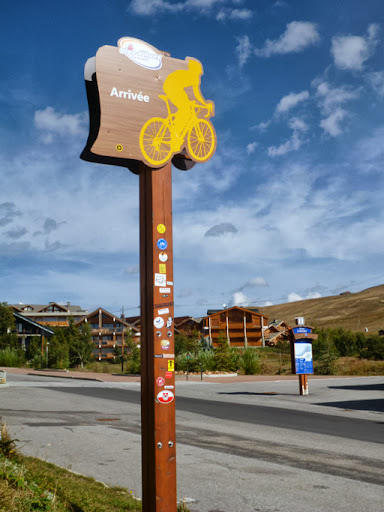 ... Except there were no crowds.

In fact there were only two mountain bikers going past, one of whom had the decency to say "Bravo" as he went past me down the hill.

And so not knowing what to do, I just kept on cycling up the hill.

I mean was it OK to stop now? Surely there had to be more to this moment than a small sign next to a bin and an empty car park?

I continued up the hill and out the top of the resort with the only people nearby being renovators working on lodges.

For six weeks I'd worked towards this moment ... and this was feeling like a bit of a let down.

I finally stopped and took a photo, then rode back down to the finish and took a few more there, and again I just sort of stood there wondering what I should do next.

It had taken me two hours to do the ride (they do it in about 40 minutes in the tour) and I'd only seen four other riders ... two who had overtaken me, and two who had constantly stayed about 500 metres in front of me. 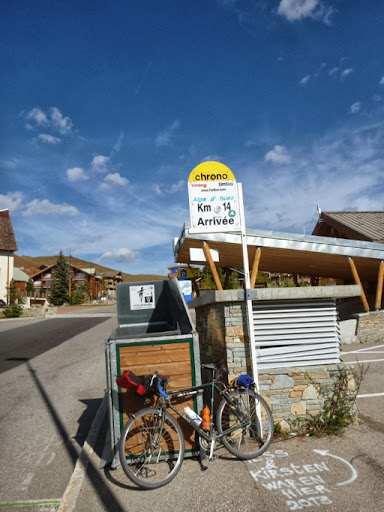 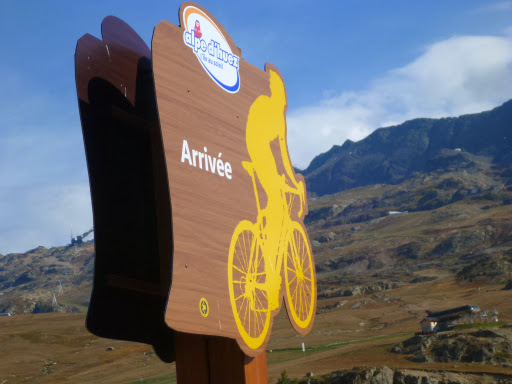 Not really having any reason to stay there, I left and started riding back down the hill.

Like on the way up, I didn't really see anyone until I passed through the village and then as I was heading towards the first bend I saw a couple of cyclists heading towards me so, excited, I stopped and took another photo. 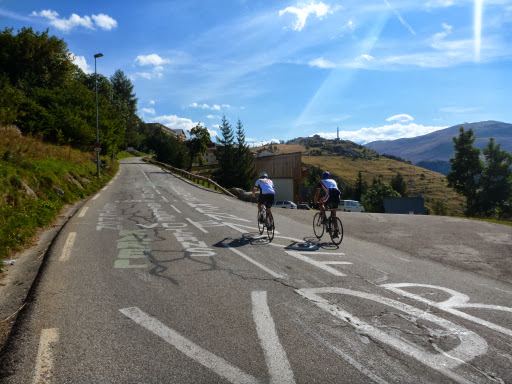 I continued down towards bend two and saw some more cyclists, and then when I stopped and looked down at the bends below me, I suddenly saw this near constant stream of cyclists wending their way towards me. 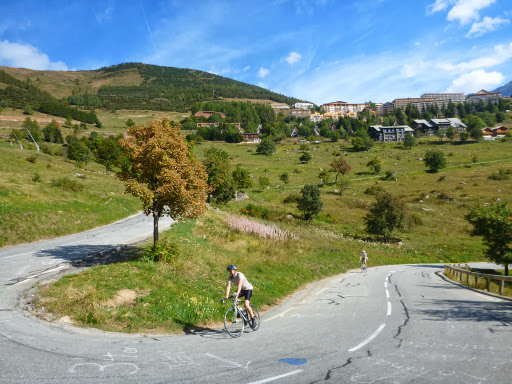 I also wasn't going to ride back up to the top again to be part of the masses.

Instead, I slowly continued my way back down the mountain, stopping and taking photos and enjoying watching all those other riders fight, battle or cruise their way towards the top.

I also noticed that they were riding everything from mountain bikes to touring bikes.

Somewhere on the way down, the thought finally came to me that I'd done it. 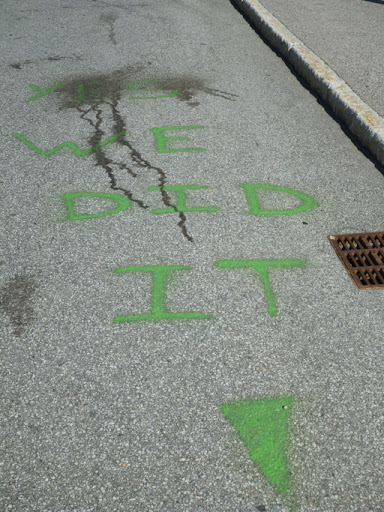 I know that riding to the top of the Alp D'Huez in just under two hours is slow, but six weeks ago when I'd left Australia I couldn't walk up a flight of stairs without breaking out in a sweat and having to take a break.

Now I'd just ridden up Alp D'Huez without stopping. Not once.

And I still felt really good.

Now, that's something to celebrate. 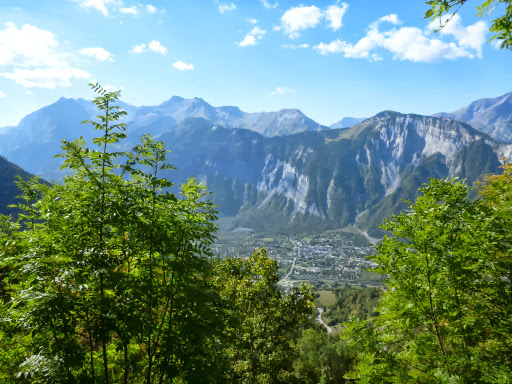 The fact that when I got back down I found that I had indeed broken another spoke, well that was just a bonus. 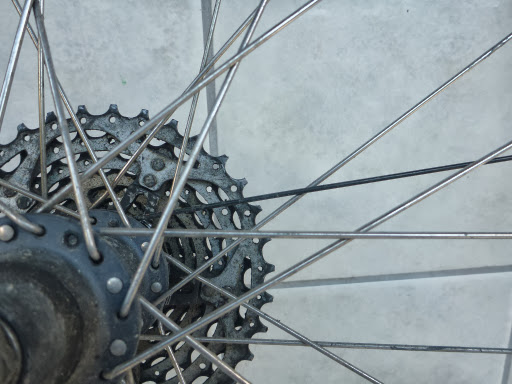