It's about 50km from the Grenoble Train station to the base if Alp D'Huez, and it's mostly uphill, so if you just want to get there without riding up (which by the way many do), you can jump on the Transisère bus 3000 or 3020 which runs to either Bourge l'Oisans or Alp D'Huez and they were quite happy for me to just throw my bike and gear under the bus. 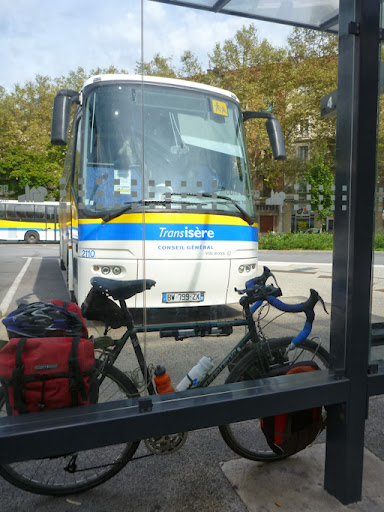 I rode back down to Grenoble, and would recommend this option (despite getting two punctures myself). It's a fast, easy ride on either flat or descending roads and there's lots of cyclists who ride the route.

It took me about two and a half hours to get back to the train station, but that was at a very cruised pace.  There aren't many places you can go wrong (especially if you note the route out on the bus).
Posted by Tassierambler at 15:10