I have not been on a mountain bike since Wildside.

What concerns me more though is that I haven't wanted to be on a bike since Wildside. 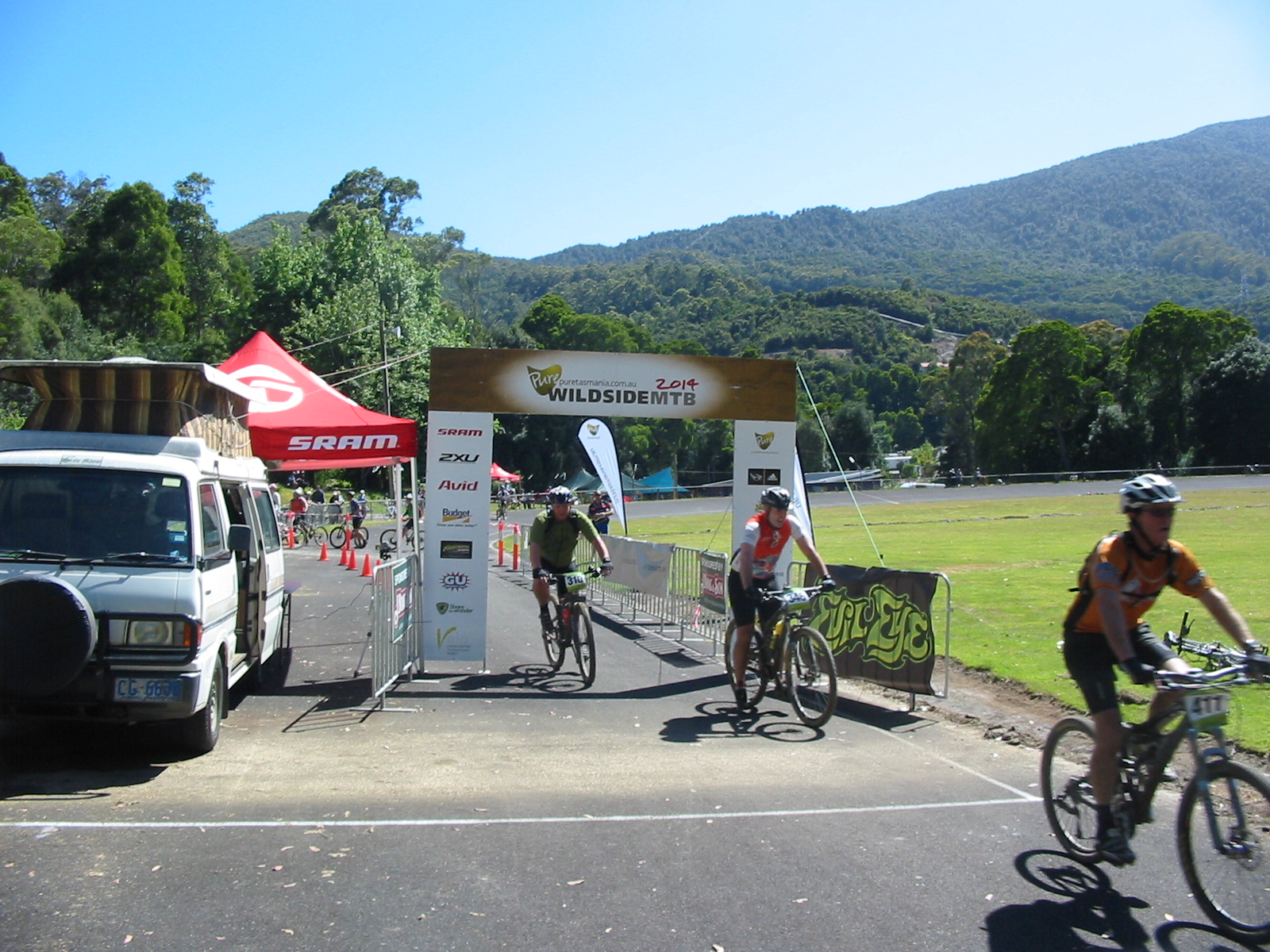 Other than a few commutes into work on my electric bike, I've basically been sitting around waiting for the desire to ride to return, but it just hasn't, and so I figured if the mountain won't come to Mohammed, then it is time to for Mohammed to go back to the mountain ...

And, I further figured, what better option for getting back on the bike than heading out to ride the Day 2 Hellfire Cup Trail which I didn't get to ride due to that stage being cancelled during the event.

This worked really nicely as not only did I have the GPS of these trails (they were given to all competitors in the event) but Kim and I had decided to take the monsters up to Gumleaves for the night (after she'd taken them to surf club in the morning) so I had a morning all to myself to go riding and these trails were (almost) on the way ...

That's what I call serendipity.

And it was ... well, after I managed to find all my gear which had just been shoved in various places after Wildside finished and then navigated my way to a start point about half way around the course on Weilangta Road ready to ride ...

Yep, once on the bike it all came back to me, and for all of about 1km everything went swimmingly.

Then I came to the spot where the GPS trail headed off the gravel road and down onto a rough, but rideable, trail and off I set with a cry of returning joy ...

Ten minutes later I was back at the same spot with a slighter smaller smile on my face because after plummeting down the track following what looked like blue tape markers, I finally spared a glance at my GPS and noticed I had ridden completely off the GPS track.

So, I returned to ground zero, cycled a hundred metres down the road to make sure I hadn't taken a turn too early and then set off down the trail a second time, slightly more slowly but confident that a junction I had passed on the way down the first time must now be where I wanted to go ...

Twenty minutes later I was again back at the same spot having explored some wonderful trails, but none of them going where I needed to go, and meanwhile I was now completely flummoxed as to what the heck was going on with this GPS track as it wasn't following any trail I could see.

In fact, as I was to discover over the next hour, either I missed a whole lot of good track (very possible) or the GPS track that was provided was more 'conceptual' than 'actual'.  Here, take a  look yourself and see what I mean ...

I started on the left hand side of the map and was trying to follow the blue GPS line provided.  The red line was my actual route (and the dead ends it entailed) and to give that some context, each one of those black squares is a kilometre, so sometimes I was more than 500 metres off the GPS track.

Normally this type of exploration would just be part of the process of finding new trails, but I had a girlfriend and two monsters who were expecting to rock up at Gumleaves around 3pm to find the tent up, the air beds inflated, the fire wood cut and the camp chairs out ready for some serious marshmallow toasting and at my current pace, they were going to get there before I did.

Fortunately, after these early misadventures, the GPS and actual track seemed to move into a much closer alignment, so the only challenges were getting over or around the trees that have blown down over the track, the many climbs and a constant worry about snakes (strangely I didn't see one the whole way round on the bike, but then saw three as I drove back over the Weilangta Road section that I'd just ridden on my way to Orford).

Maybe that's the Serendipity I was searching for? 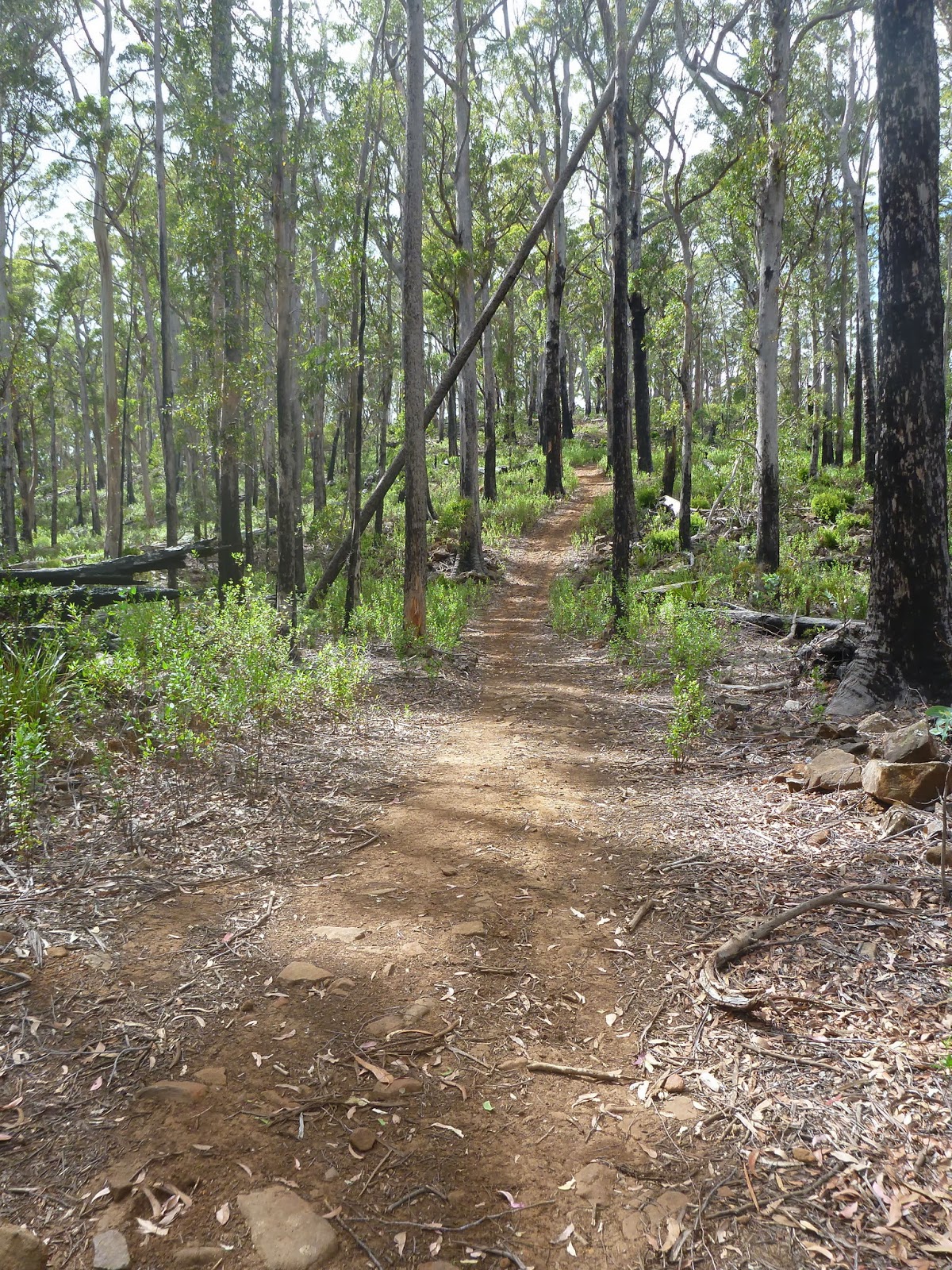 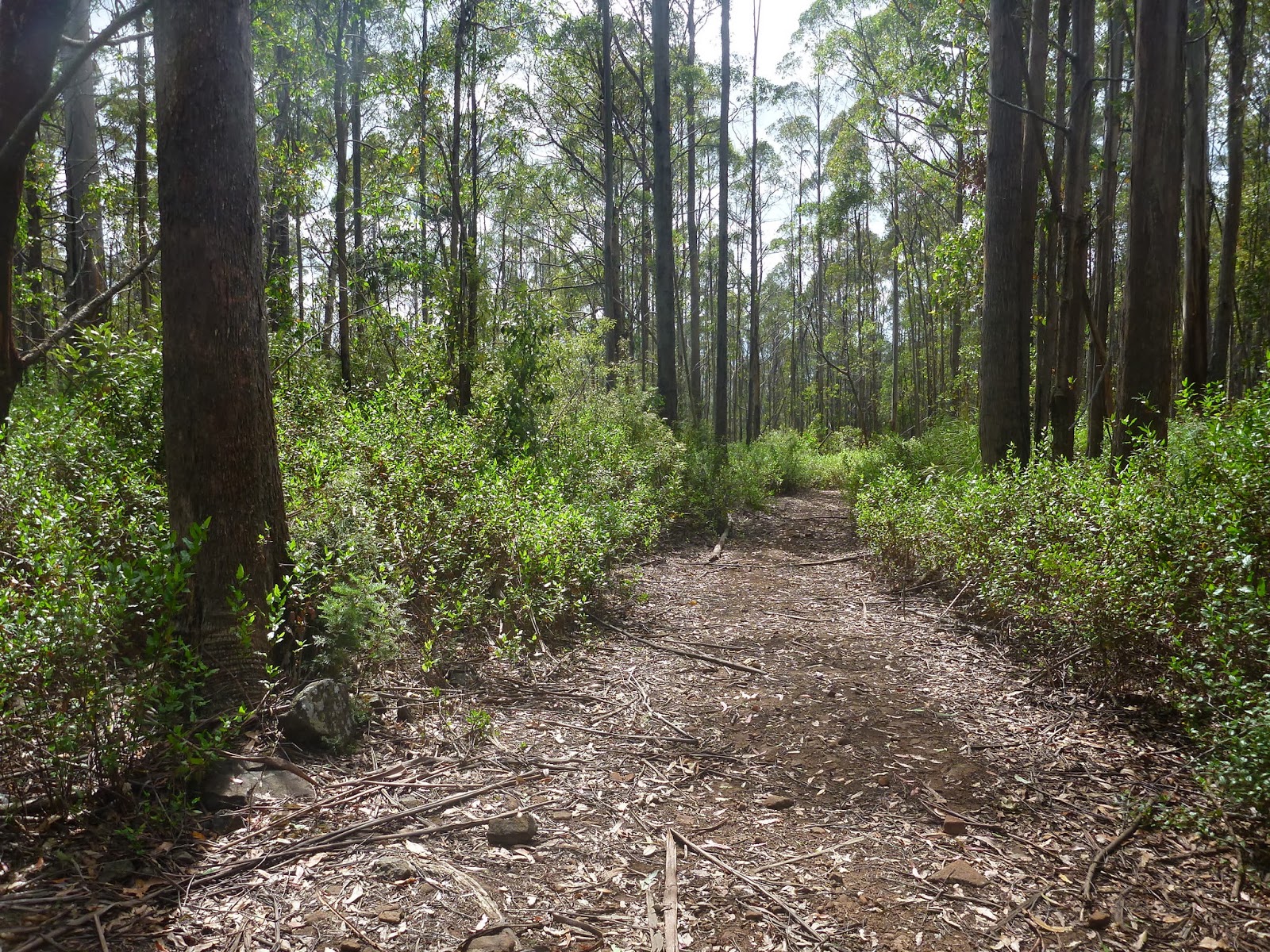 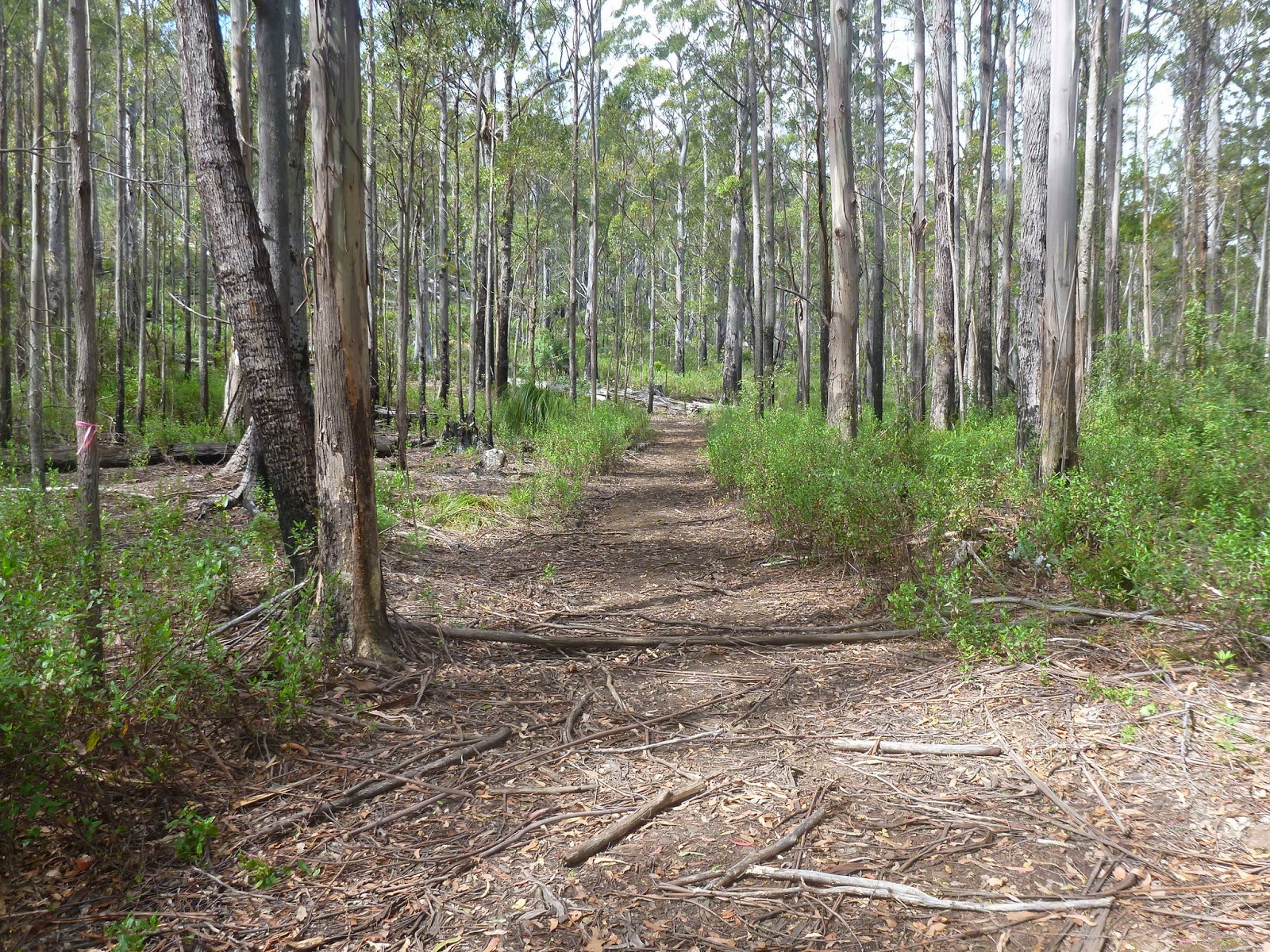 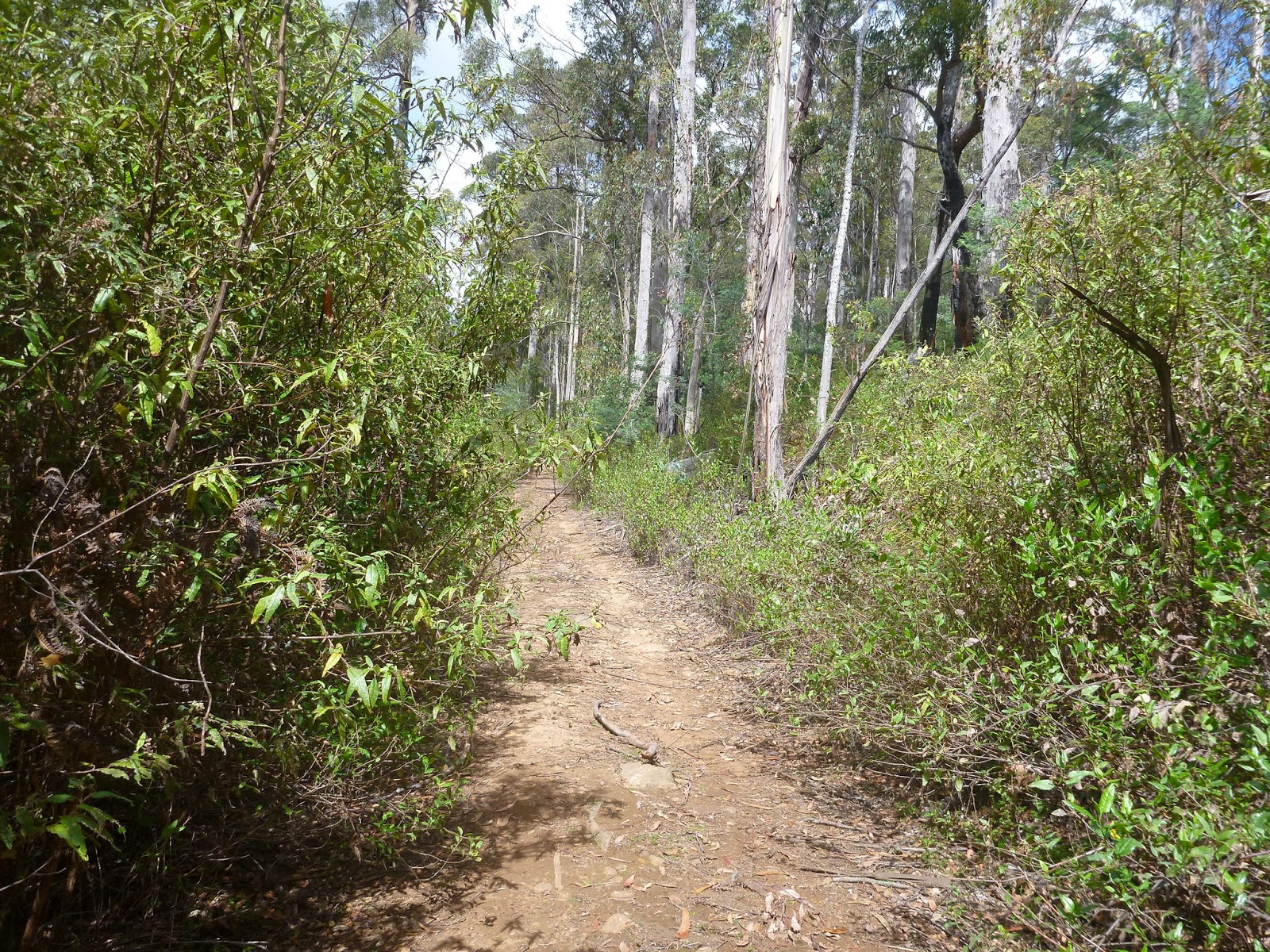 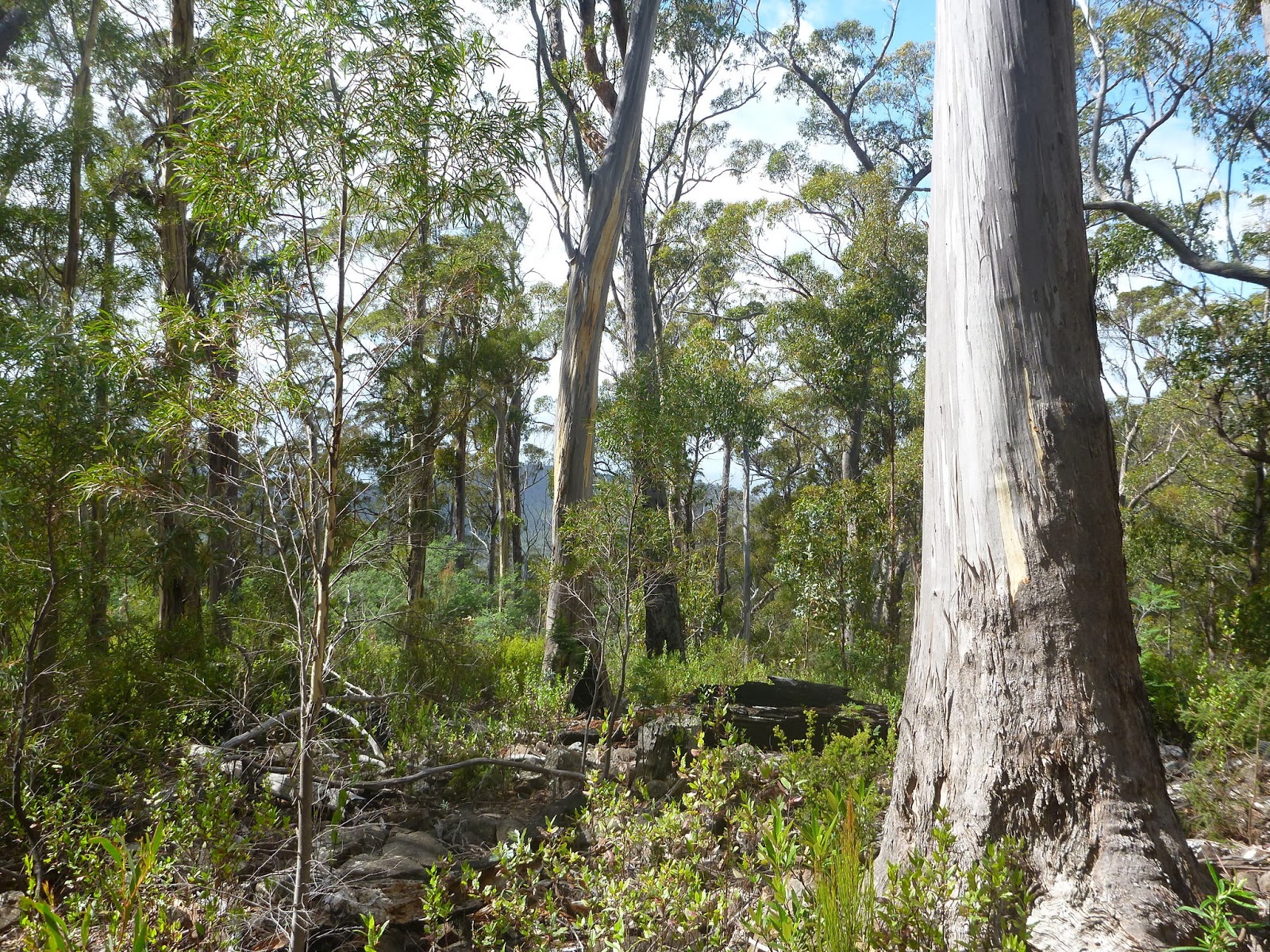 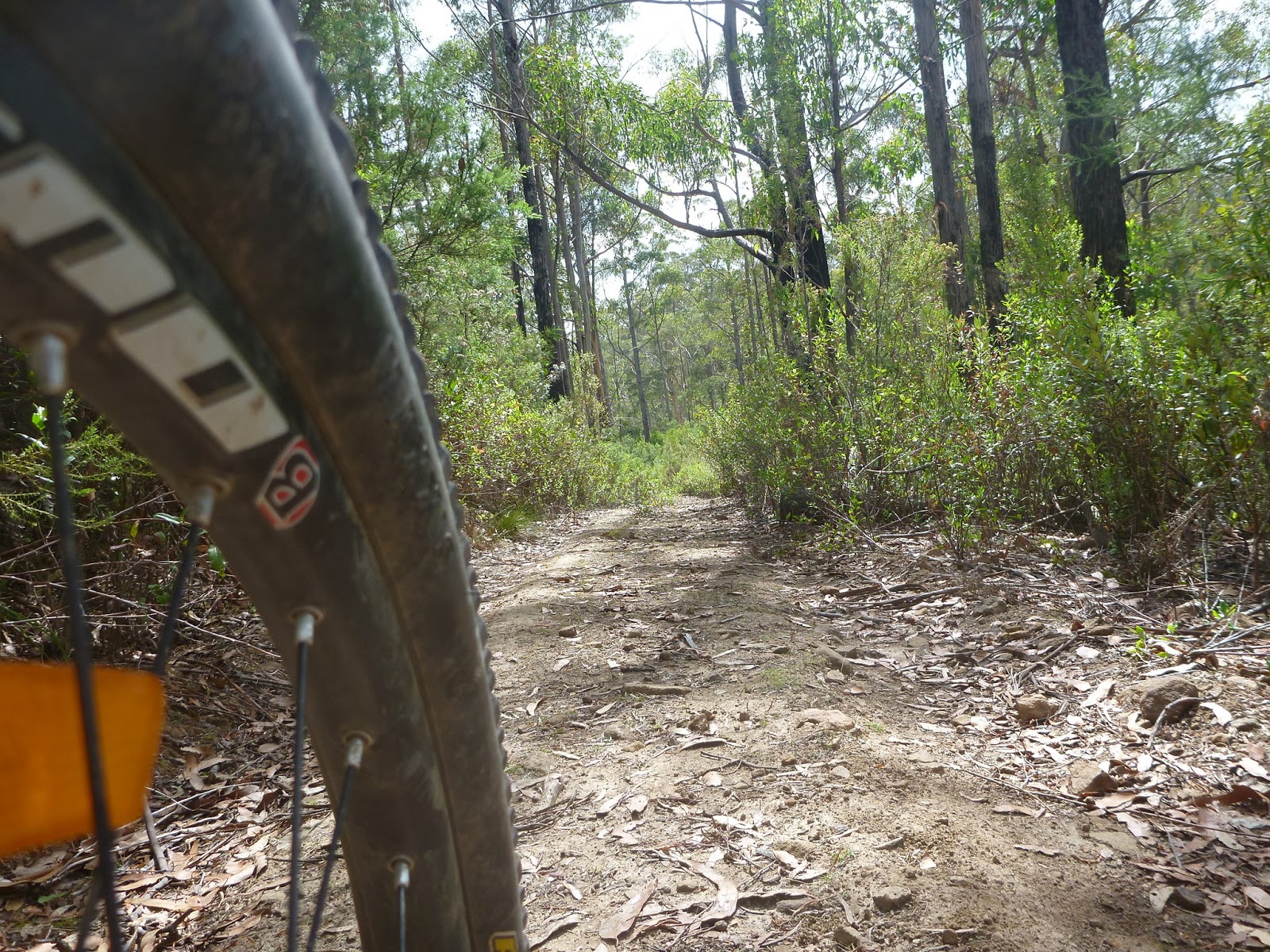 I don't know if I missed some great sections of track in that early section, and I did skip over half of the days stage choosing to just ride the northern most loop (starting at the road that heads off at Emergency meeting point 181) but I'll be honest and say the best I can say about this loop is that it was good to have ridden it.

Cutting out the dead ends and backtracking, the first few kilometres are all about working your way uphill on a pretty well maintained gravel road, which is fine and sensible for getting you up to the top, and then it does get fun, with some pretty nice riding along older bush tracks, but they weren't blow you away amazing tracks, and they certainly weren't worth the long grind back along Weilangta Road to where I had (stupidly) parked my car on what was probably close to the highest point on the route (next time if just doing this loop I'd park either at Sandspit Forest Reserve or more likely the Northern End of the Weilangta Walk and get the uphill riding out of the way first). 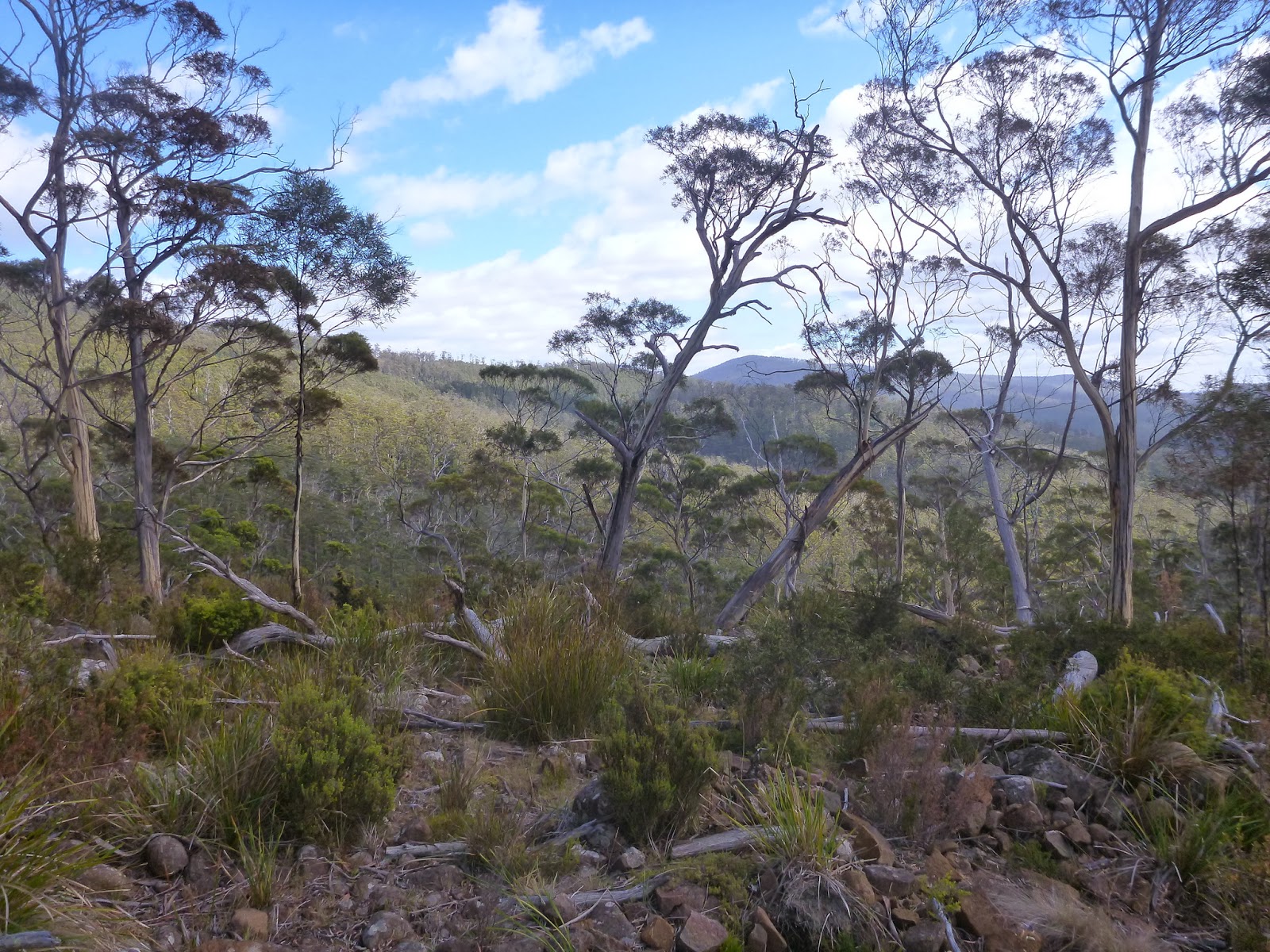 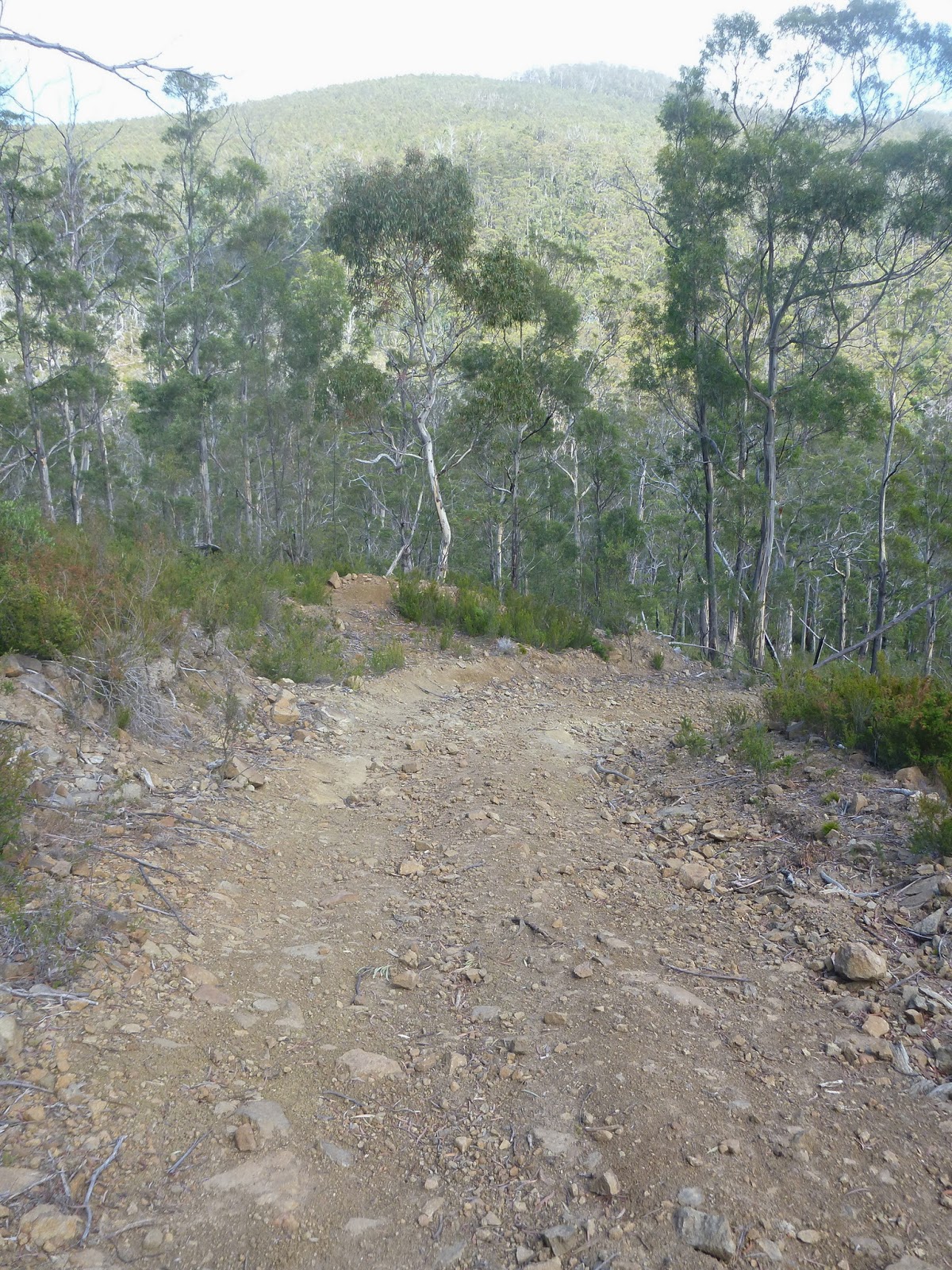 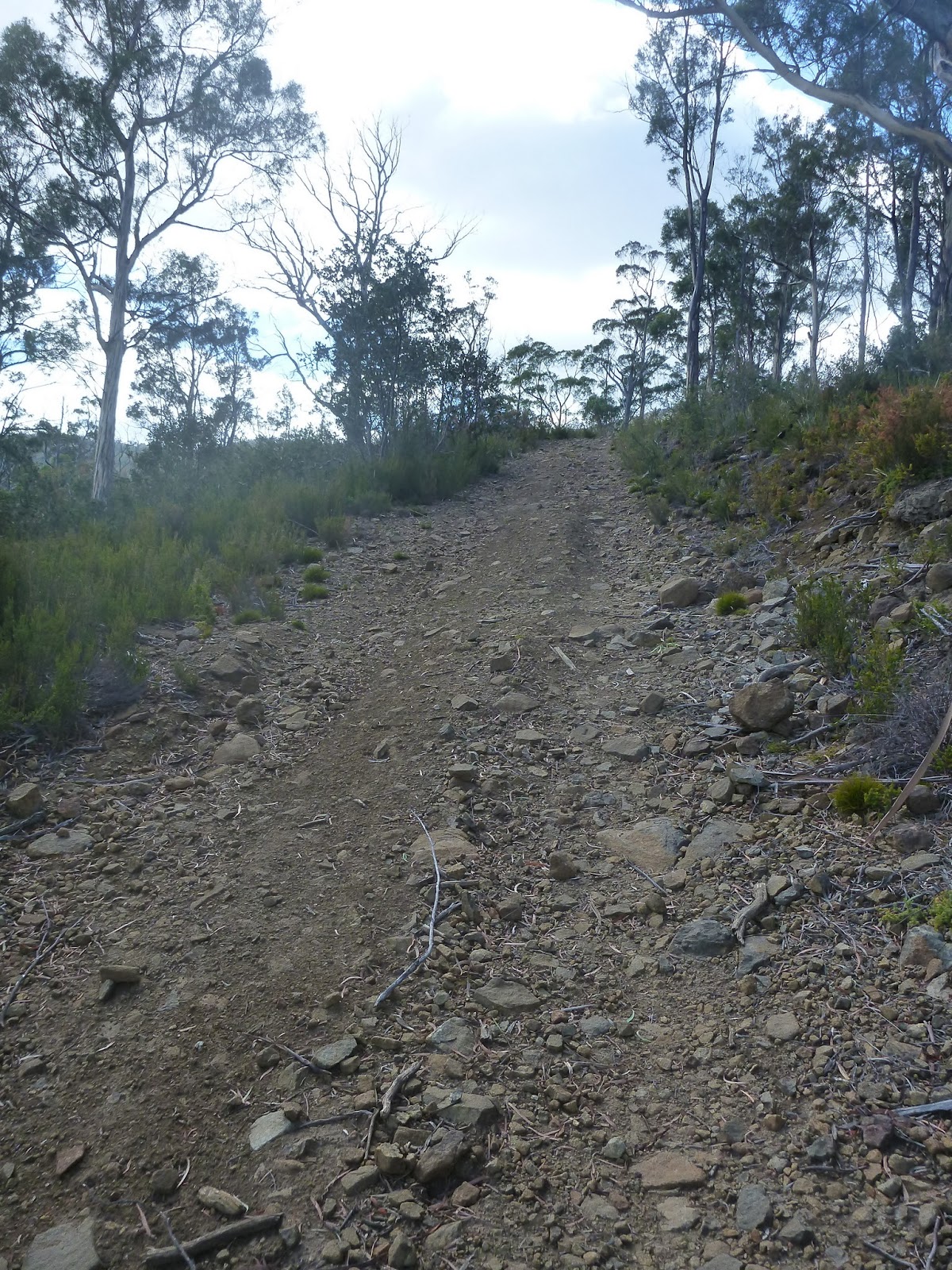 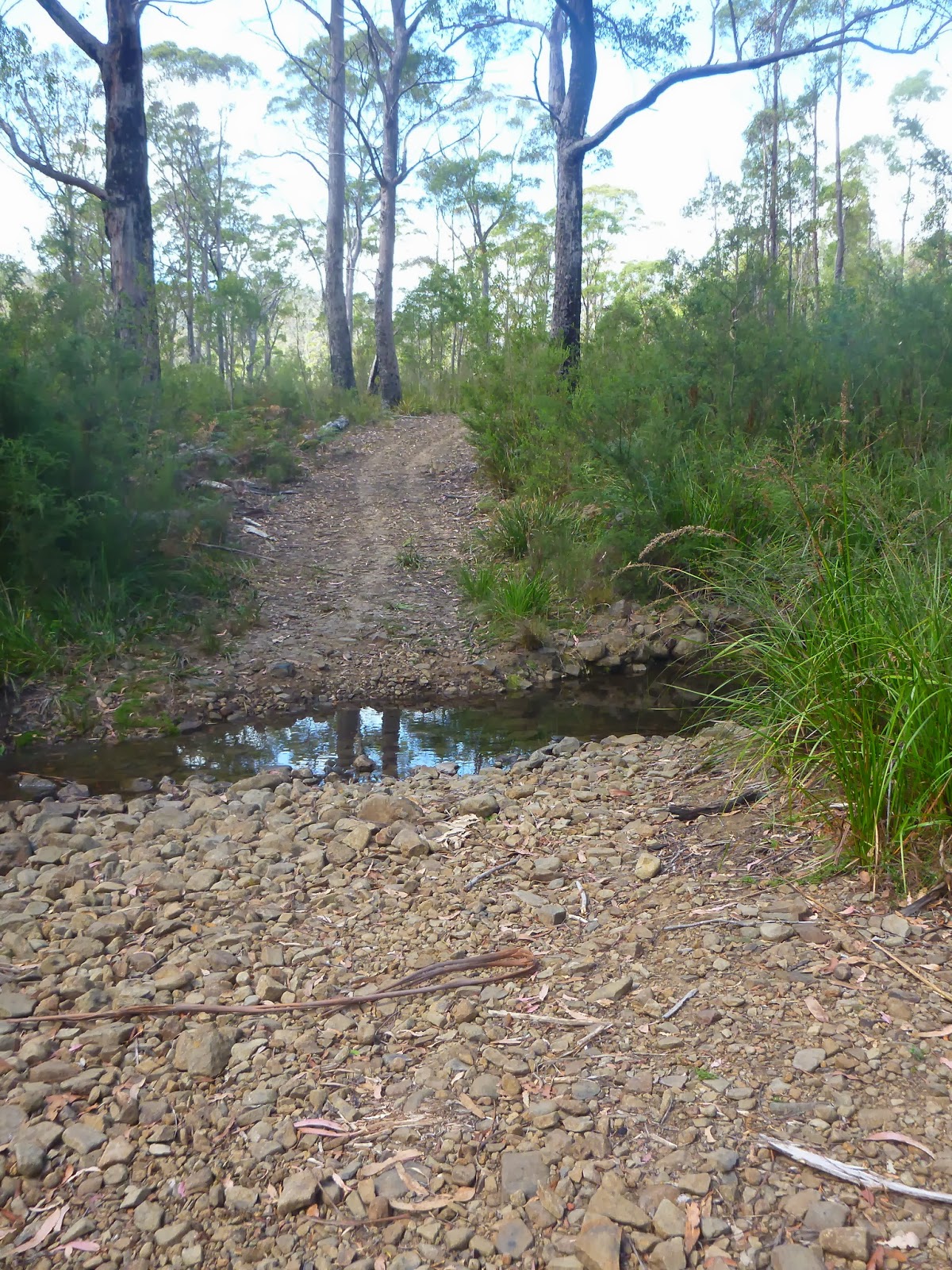 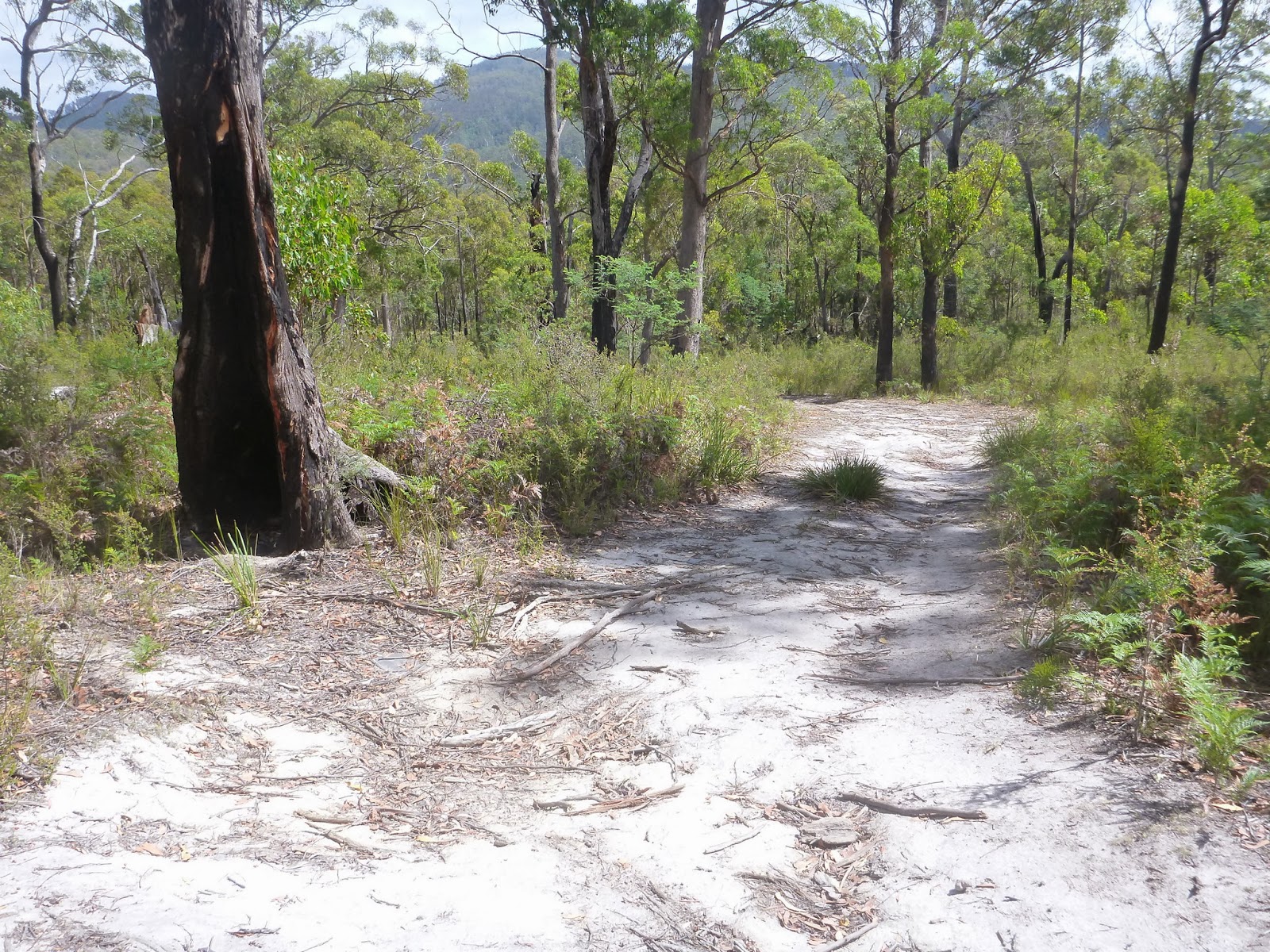 There was a nice, but short, section of single trail just before coming out onto Weilangta Road, and I've read that the 1.5 hour one way Weilangta Walk to the Sandspit  Forest Forest reserve (which the Hellfire Cup doesn't use) follows an old tram line which has me thinking that maybe if that was cleared it might make an awesome alternative to the current grind up and over the hill to the reserve (I did poke my nose down here about 300 metres, and it did look promising, if somewhat overgrown, but time was against me and I didn't really want to rock up at Gumleaves at 7pm that night having to explain how my need to explore is as important as Kim's need to have a tent and campfire, so I turned around and rode over the hill instead).

I still want to get back out and ride the rest of the route, and I have no doubt I will, but today it was just good to get out and blow away the cobwebs and enjoy some solo time on the bike.

What ended this serendipitous day was that I still managed to get to the Triabunna Fish Punt for a late lunch and get back out to the highway in time to meet Kim and the monsters just as they drove past to join me for our next adventure at Gumleaves ...
Posted by Tassierambler at 13:00