My mantra at the moment is to get things done 'just in time' ... or more honestly (because that sounds like I'm being efficient and effective) in my working life it's something like: 'just before they fire me' and in my personal life: 'just before everything becomes a disaster'.

Which is why Friday night after work, when most people were scurrying home to avoid the rain showers, I was out vetting the southern section of the Rogaine map for today's MTBNav event before heading back to Hobart and printing off the control cards, shopping for extra plastic bags, getting the gear ready for the event and packing for the weekend away afterwards ...


By way of background (if you've not done an MTBNav or Rogaine), As the organiser, I was given a great big blank map area for the event, and I got to sit down and place a whole series of 'control points' on that map that participants have to navigate to.

My goal is to make it a fun course with lots of route options and navigational challenges.

The teams can visit controls in any order with each control being given a value between 10 and 90 points (usually reflecting some factor of difficulty or time in getting to it).  On a perfect map, the winning teams should be able to visit most but not all of the controls in the time available, leaving most teams the challenge of trying to decide which controls to visit in order to get the highest score possible in the time available.

As a picture is worth a thousand words, here is a draft of the northern map for today's event and you can see the red circled 'control points' with a value next to them. 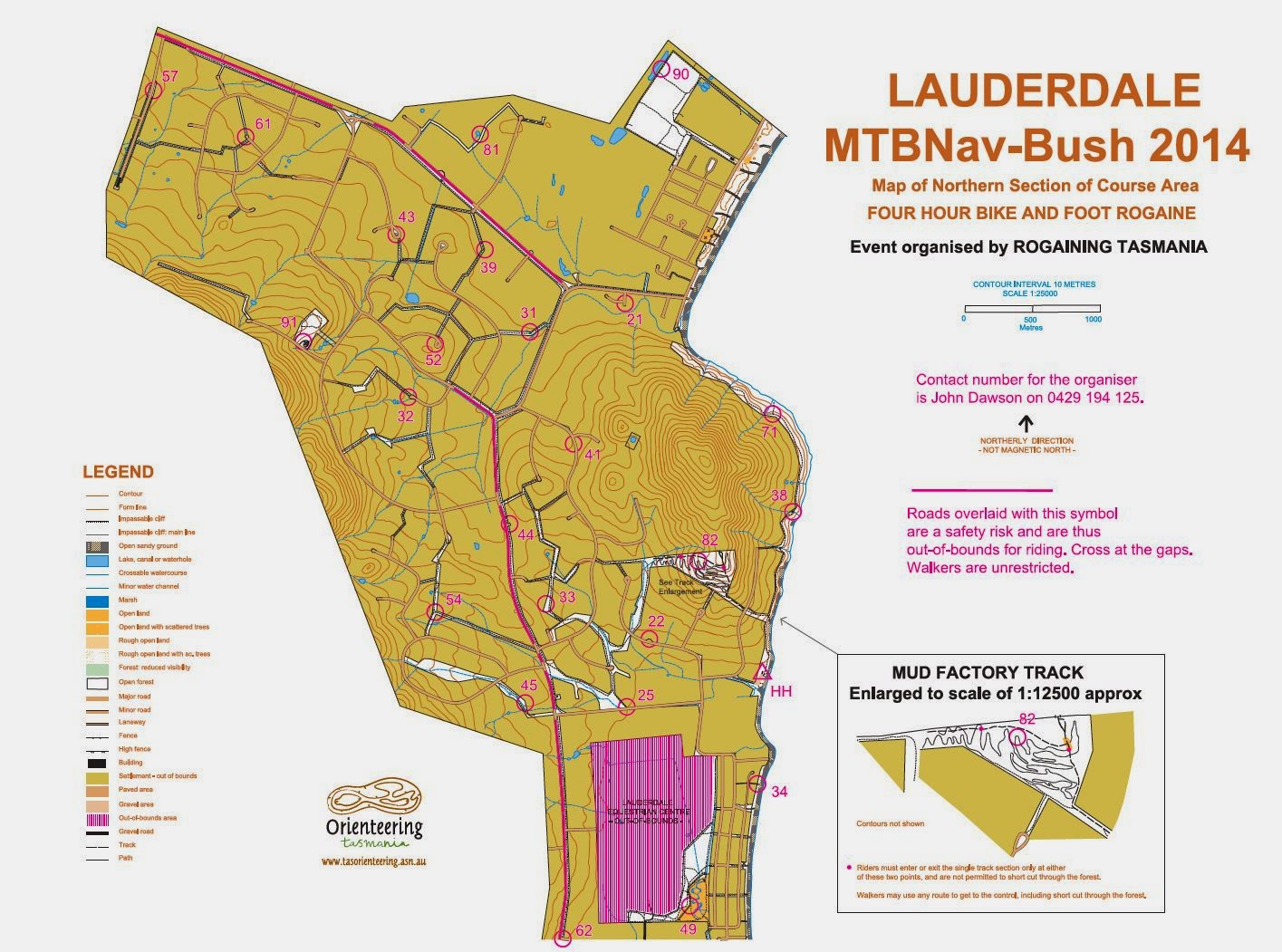 As this was a "clue" rogaine, the way it worked was that each participant was given an A4 clue sheet with a question and three possible answers for each control and they had to navigate to the 'feature' using the map and figure out the answer to that controls question (which should be easy to do), so for example the clue to control 33 was "how many tyres make up the horse jump?" with answers of 8, 12 or 16 ... see if you can figure it out ... 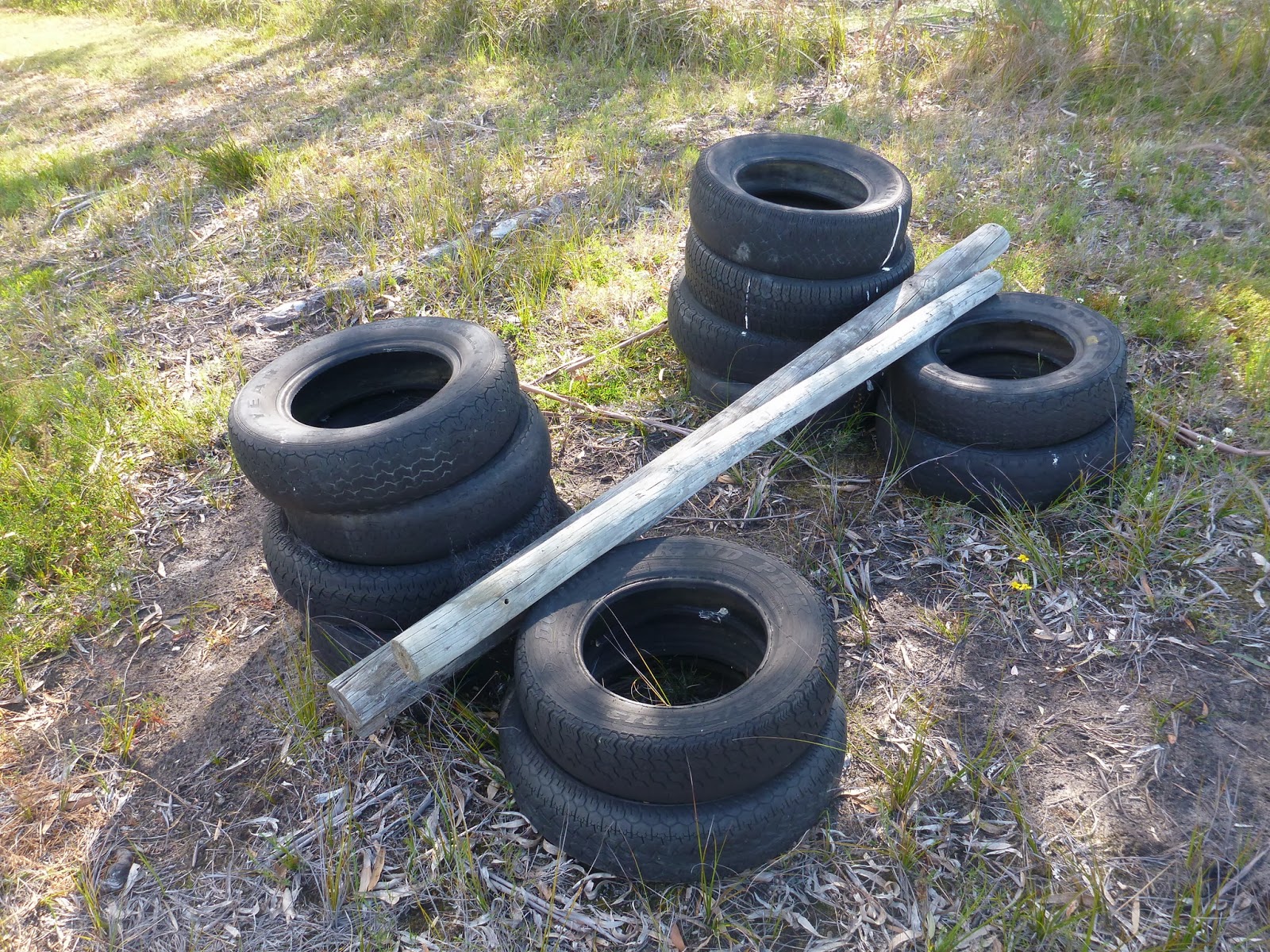 Finally, an "MTBNav" event is just a Rogaine (which is usually a foot event) where you ride your mountain bike and navigate to the controls.

Phew - that's the problem with doing obscure recreational pursuits, you have to explain everything just in case.

So this should have been a fairly easy course to set, and I thought I was on top of things until I went out on Wednesday night to check a couple of last minute controls, only to drive past another feature I'd used as a control (a business sign) to find that it was now ... a for sale sign! 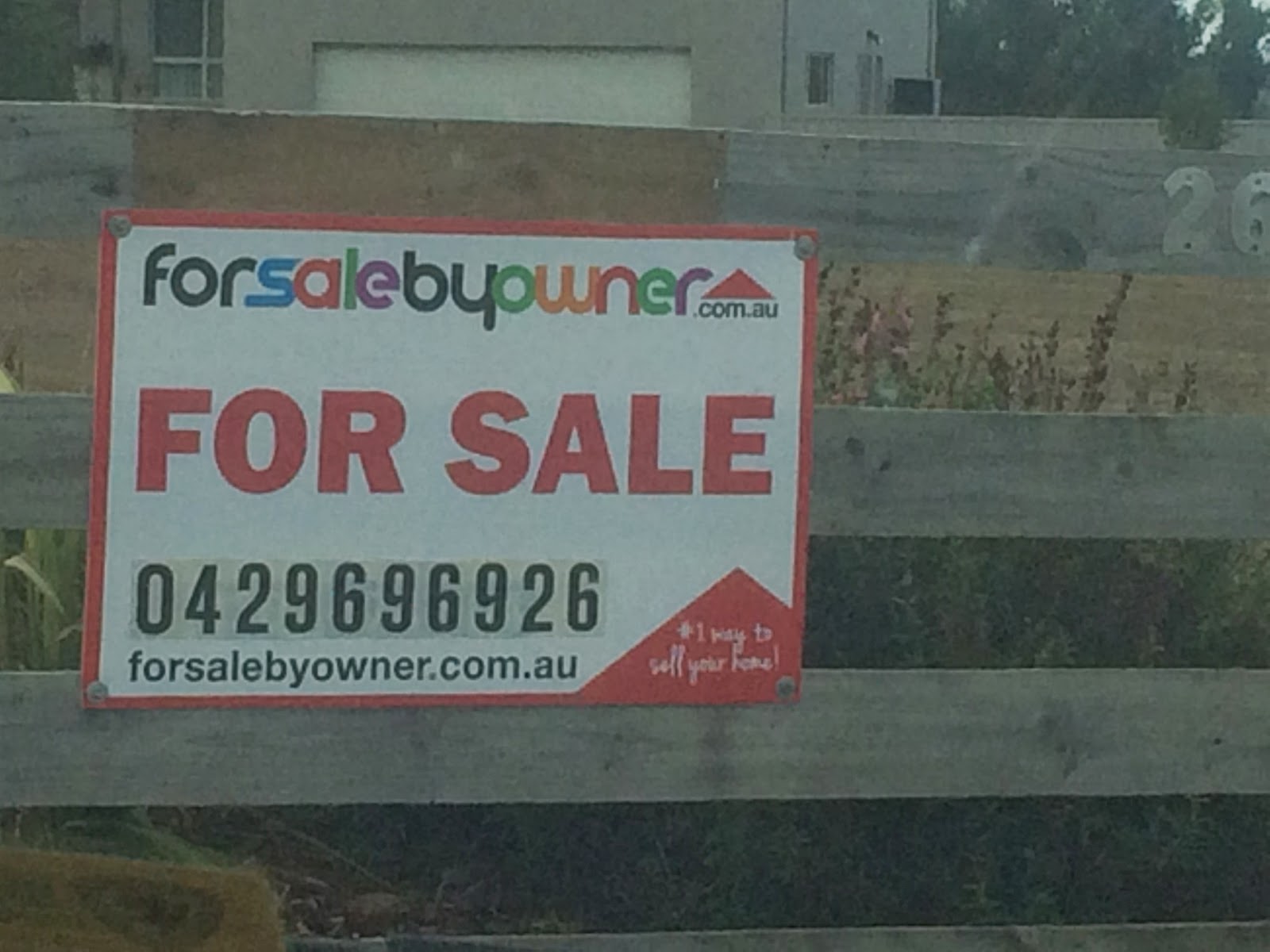 This got me a bit worried, and so I scrambled around as many other controls as I could before dark to check if they also may have changed.

And they had ... I'd put one control on a horse jump which had been there for years ... it had been dismantled in the weeks before the rogaine forcing me to find another control description that would fit in that circle on the already printed maps (yes, that's why there was a pink sticker on a woodpile).

I'd also planned on using a large semi-permanent looking net in a dam as a clue ... 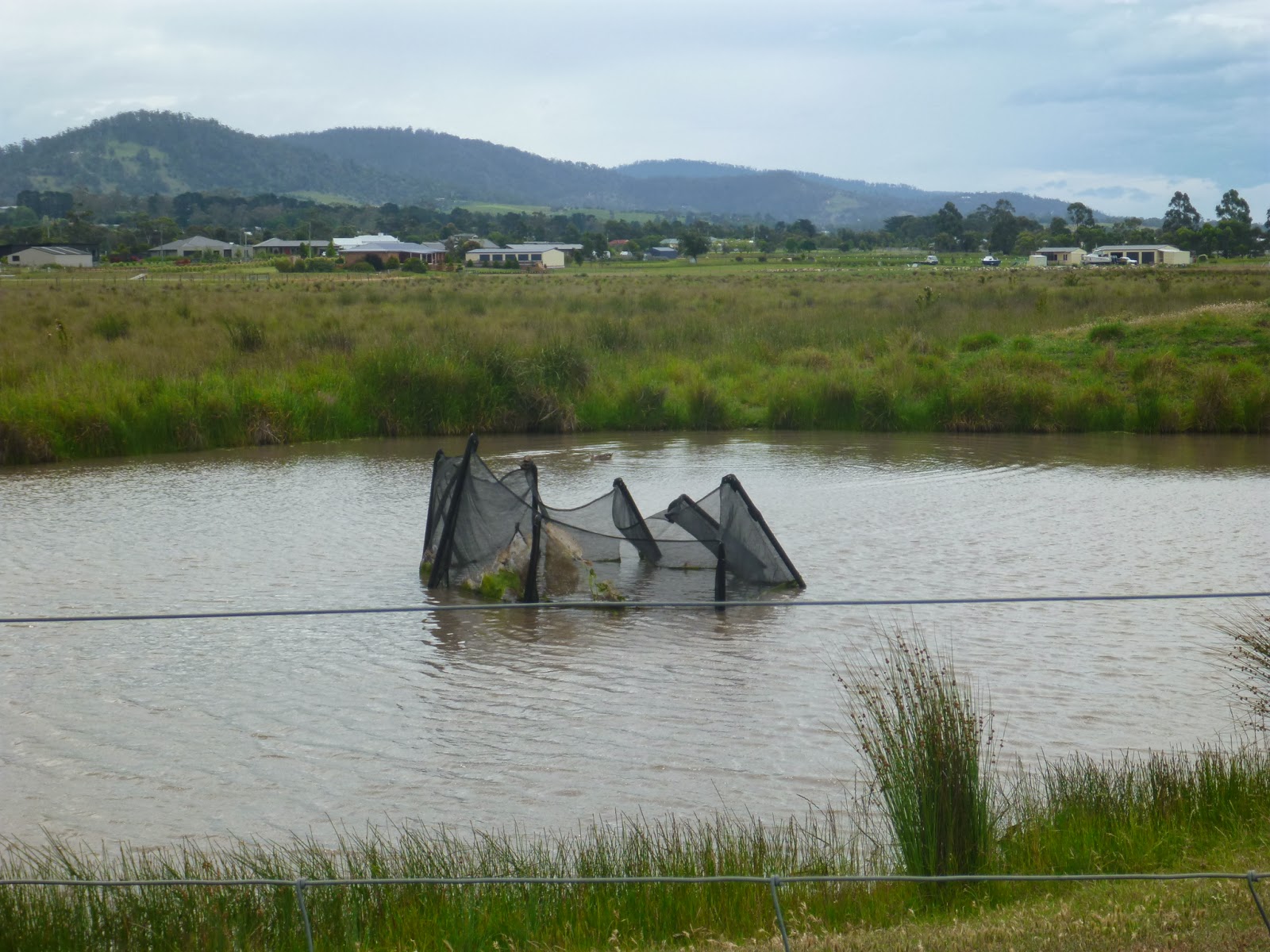 But it was also ripped out before the event, so more stickers were put out to cover that one.

But, as everyone who competed in the event knows, I missed one control change because when I looked at it on the map, I thought "nah, there's no way that one will change". 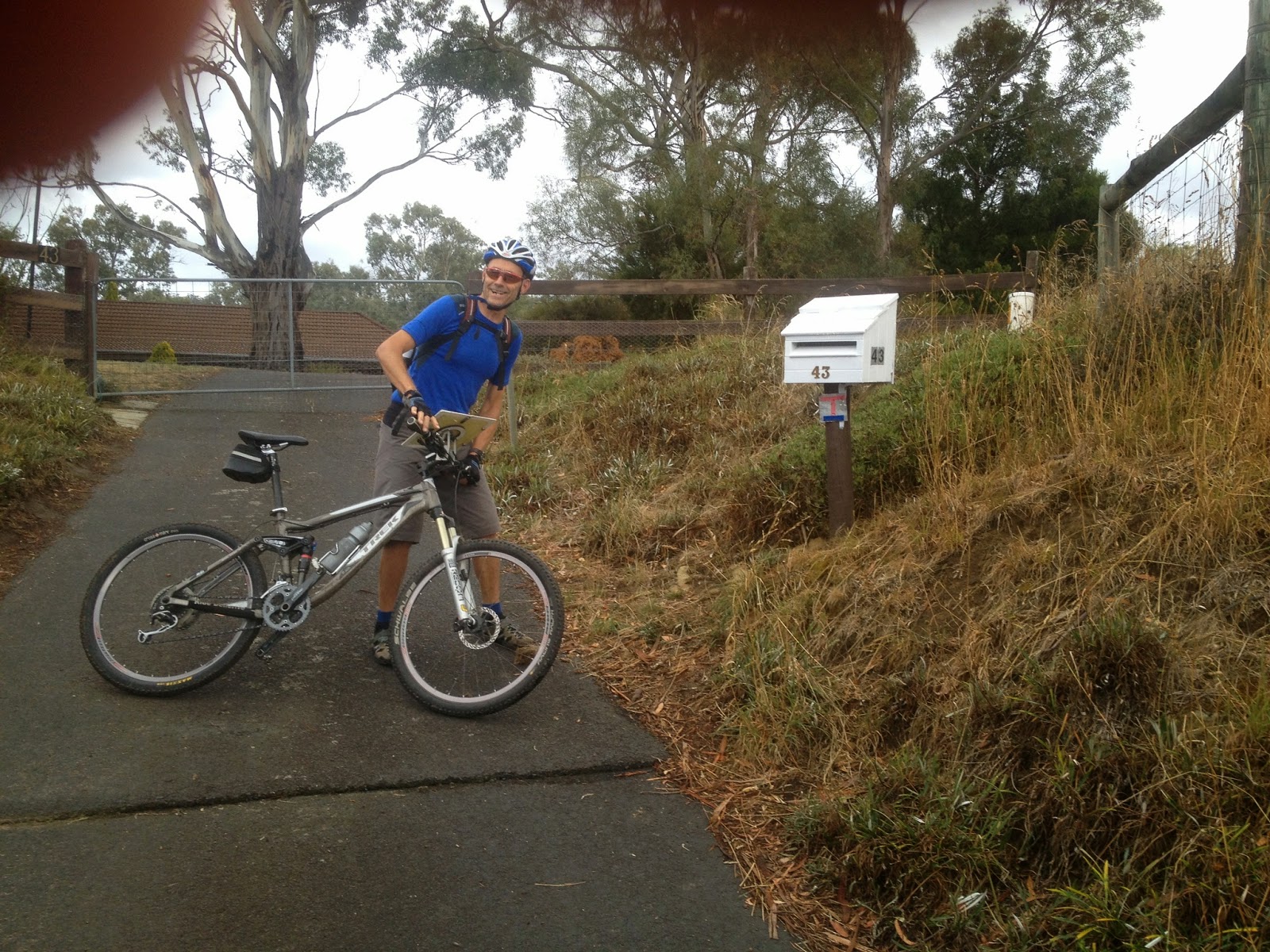 ... and not it wasn't "what colour jersey is the cyclist next to the mailbox wearing?"

The control clue was however "what colour was the post office box at number 43?" with the answer options of green, brown or black.  I'm sure you can see the problem.  I mean how unlucky do I have to be to have had a mailbox painted just before a rogaine???

For the record, this was what it looked like when I vetted it ... 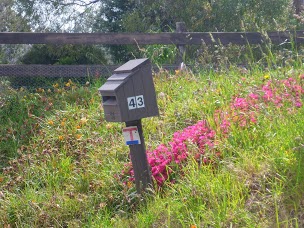 But fortunately (except for the white mailbox) I was the only one who knew about the little dramas that went on behind the scenes in getting this event together, and overall the feedback from the day was very positive.

Two teams just managed to clear the map (ie. get all controls) and they both finished with less than 15 minutes to go, which for a four hour rogaine is pretty good.  They each covered just under 70kms in the four hours and I was pleased to see that they chose quite different routes for some sections meaning that the 'optimal' route wasn't obvious ...

I personally think they missed out big time though because they spent an awful lot of time riding roads when there were much more scenic options to ride, but I guess that's the price of racing for sheep stations.

As for me, well I discovered that after the initial hectic rush of getting teams registered, maps out, the briefing done and everyone off and away ... running a Rogaining event is pretty darn boring ...

After helping me get everything sorted at the start, Kim headed over to meet Ben Maynard of Next Level Kayaking for a paddling session whilst I sat around twiddling my thumbs ...

... actually that's not quite true, in the spirit of 'just before everything becomes a disaster' I actually spent the time setting up a scoring spreadsheet in excel which would automatically rank everyone based on their category, I prepared some marking master sheets (see photo below to see my great skills) and I wrote my Commodore's report for the Tasmanian Sea Canoeing Club which was due that night ...

I also got entertained by young Noah (6 years old) who after an hour came back having collected one control.  On his arrival, he pulled off his boots, dumped a load of sand on the floor, ate all his dad's chocolate, and then decided he did in fact want to go and get another control .... which took him another hour.

I also had one injury during the event ... and of course it was a work colleague who works in the same small unit as me (there's only four of us) and who I'd sort of talked into competing in the event.

Tori walked back into the hash house about thirty minutes before the end of the event with a nasty bump on her head, a bit of a limp and a sore arm following a nasty crash into the back of one of her cycling team at 33kms/hr on the bitumen (yea that sort of hurts).

She seemed OK though, still laughing and smiling when she left to go get checked out in hospital ... just to be safe.

Apparently that didn't last much longer as she was soon feeling a bit nauseous and ended up spending eight hours in hospital where she found out she had a fractured arm and rib as well as concussion.

Worst of all though, poor girl was heading up to Fraser Island this coming weekend ... now she'll be watching re-runs of The Walking Dead and probably dreaming of setting a horde of ravenous zombies onto me ...

We managed to get through the scoring and results fairly efficiently (apologies to anyone I may have been a bit short with as I tried to focus on getting the results together) and then that was it ... months and months of planning and worrying and riding and vetting all over ...  event done and I'll call it a success.

But no time to reflect on that as "just in time" needs had kicked in again and Kim and I had to throw everything in the car and drive straight from the event up to Beauty Point (at the other end of the State) so she could be ready for a run in the Convicts and Wenches 25km race the next morning ...

=============
PS. we have about 25 copies of the maps left, so if you missed out and want to have a go at the course in your own time (or get a great copy of the trails in the area) feel free to contact me and 'd be happy to provide a copy of map (2 x A3 high quality sheets) plus the clue sheet for the rogaine for just $5 which will go back to Rogaine Tasmania  and helps covers the printing costs of the map and will help us fund the next event ...
Posted by Tassierambler at 14:00