One of the least attractive things I have on my bucket list is number #95 ..."Spend a few days at an outdoor music festival"

I'm wondering if my attendance at the NSW Sea Kayaking Club's Rock n Roll weekend might let me tick it off  ... 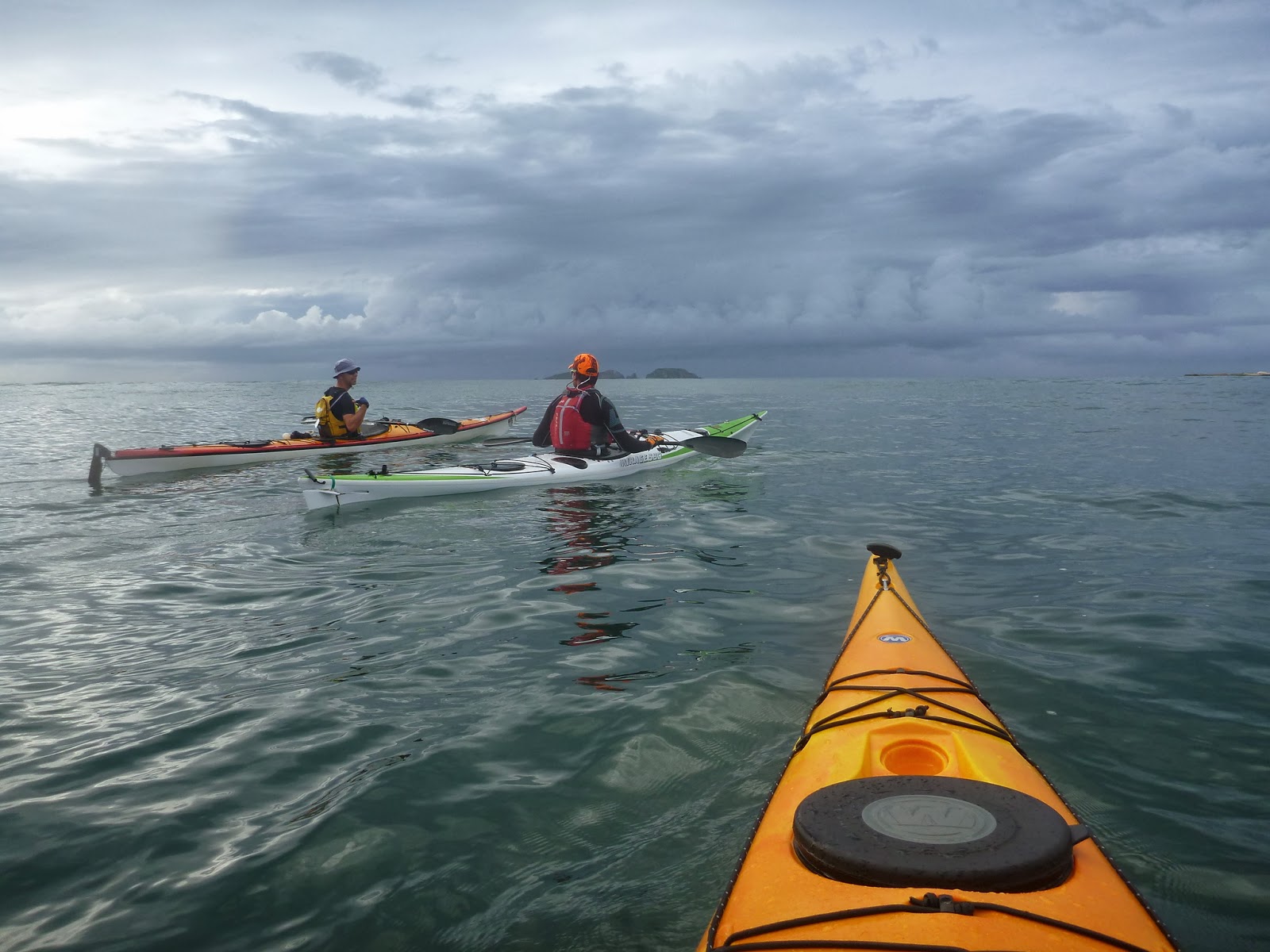 The NSW Sea Kayak Club's "Rock n Roll" weekend is the club's annual weekend of paddling, socialising and training.  In simple speak, it's a chance for their members to all get together, go paddling on a beautiful piece of coastline (this year it was at Bateman's Bay), go to interesting talks, buy stuff, show off their skills ... and their boats ...


... and for many it's a chance to gain their all important paddler grade sign offs so they can go on longer and more adventurous trips.

I got to attend because the NSW Sea Kayaking Club was hosting this years National Sea Kayak Summit and, well, someone had to go up and represent Tasmania, and we all know that I'm one to make sacrifices for the greater cause ...

The hell part was because Rock n Roll does not reward the meek and mild (ie. introverted me). 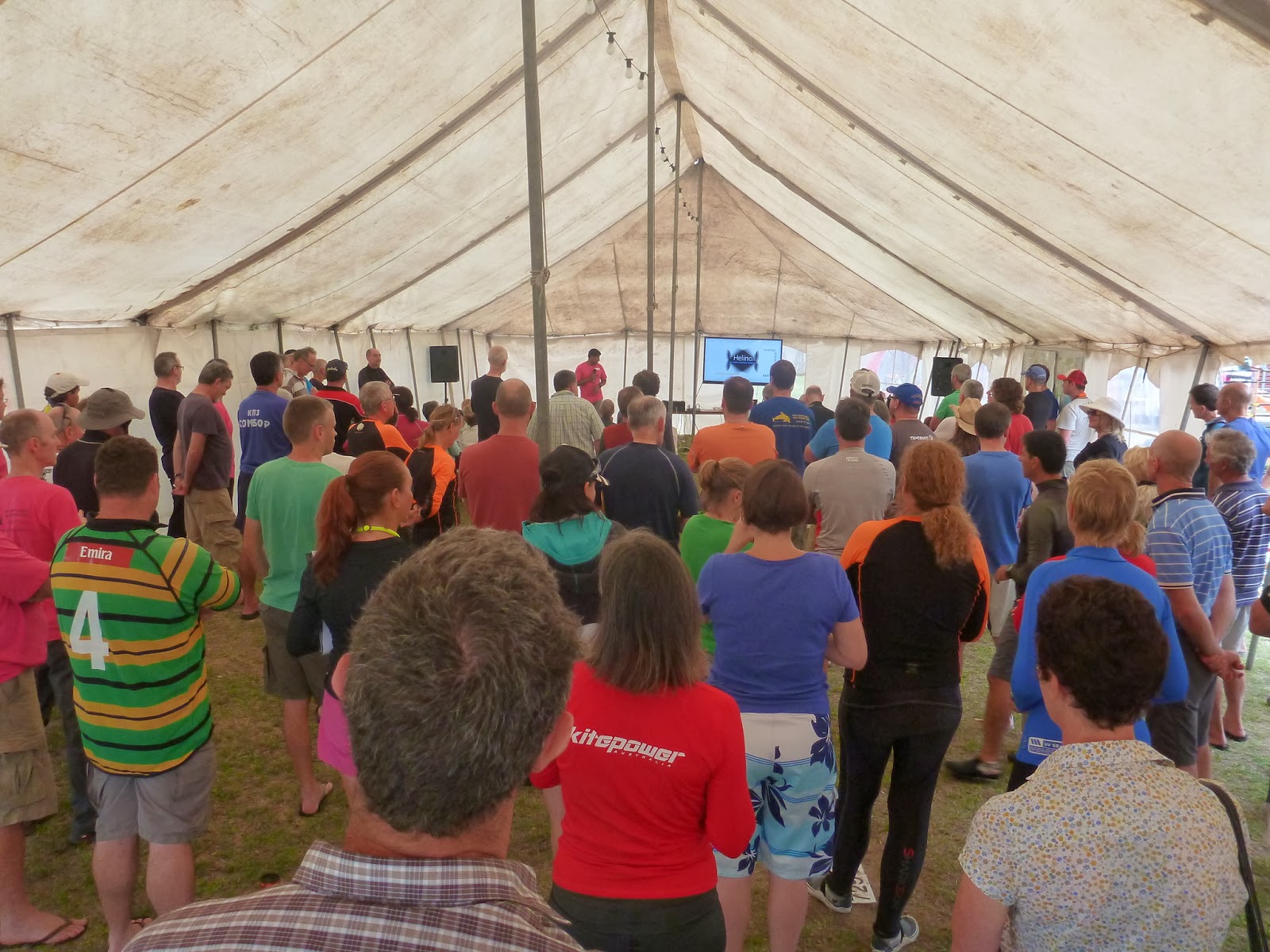 On day one, I dutifully went to the morning briefing of available trips for the day, stood right at the back and listened to the trip options and then walked over to the table where the coordinator for the day had said I should go to sign on for the Tollgate Islands trips.

Problem was ... no one else was there.

It took me just a minute to realise that the trip leaders had all been swamped before they'd even got near the table and all the trips I wanted to go on were therefore booked out.  I then walked around trying to find some other trips I could get onto, but it soon became apparent that chaos ruled and every leader I approached was either booked out or too busy to talk to me (Being from Tasmania, I was a bit of an anomaly because I wanted to go on Grade 2 /3 trips but I was wearing a big tag saying I was "Ungraded" and so the whole explaining business to get onto trips was a bit hard).

Anyway after a few unsuccessful attempts at getting on a trip, I did what any good introvert would do ... I ran away and hid in the toilet wishing I was anywhere but here.

After a moment calming myself with the reassurance that the world wasn't going to end because I didn't get on a trip, I emerged from my sanctuary with a Plan B - I had a boat, I had a paddle ... and I had a nearby coastline that I could just head off and explore by myself.

However as things transpired, on inquiring on who I should register with for a private paddle, Neil (the guy who had given me a lift down) took pity on me and invited me along on his 'easy' grade 1 to 3 trip around the bay.  I figured that as that was where I was going anyway, that it was a good option and so took up his offer to let me tag along. 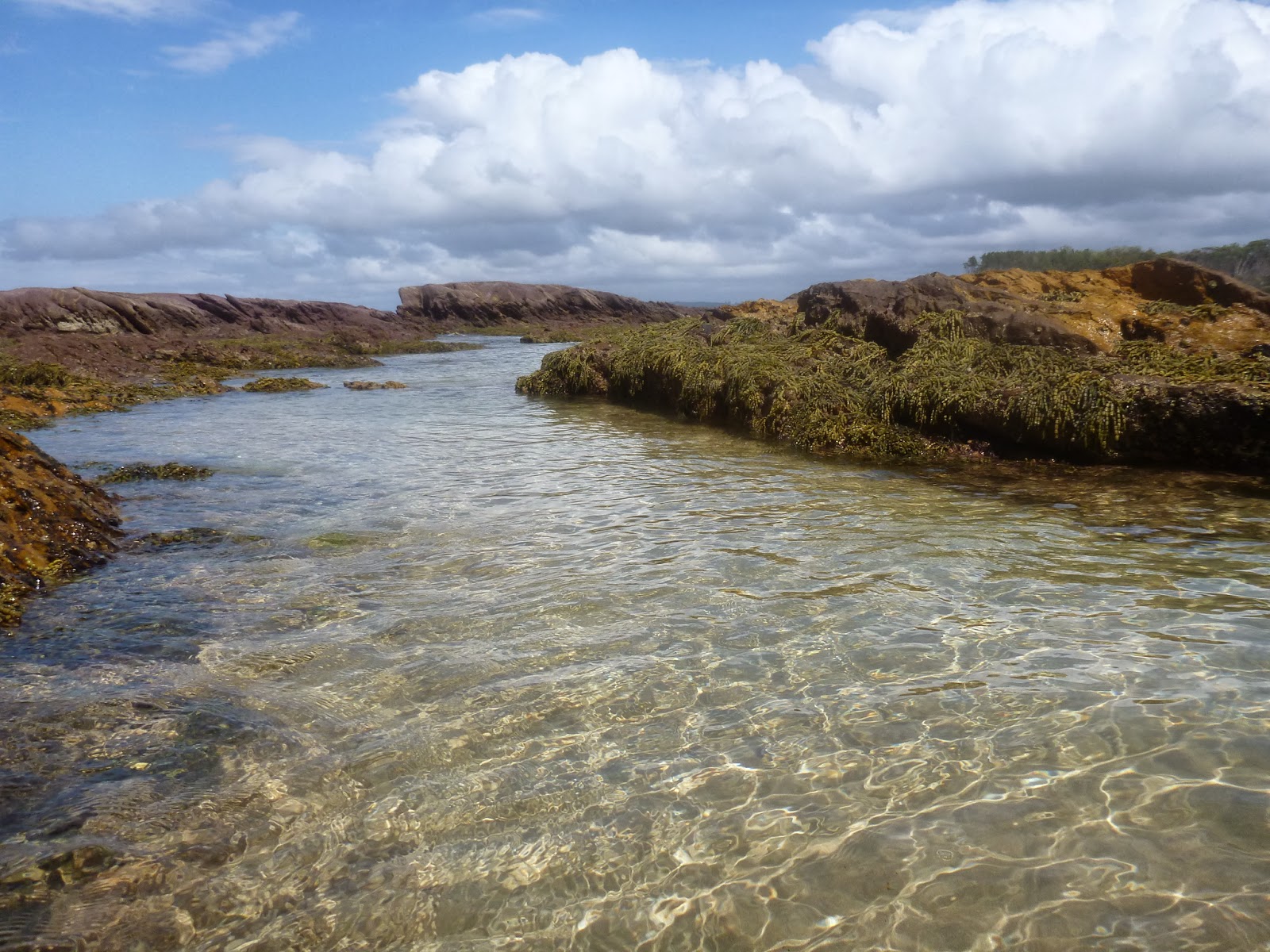 After our morning paddle and a quick lunch I found myself torn between attending Mick MacRobb's session on installing a flat earth sail ... 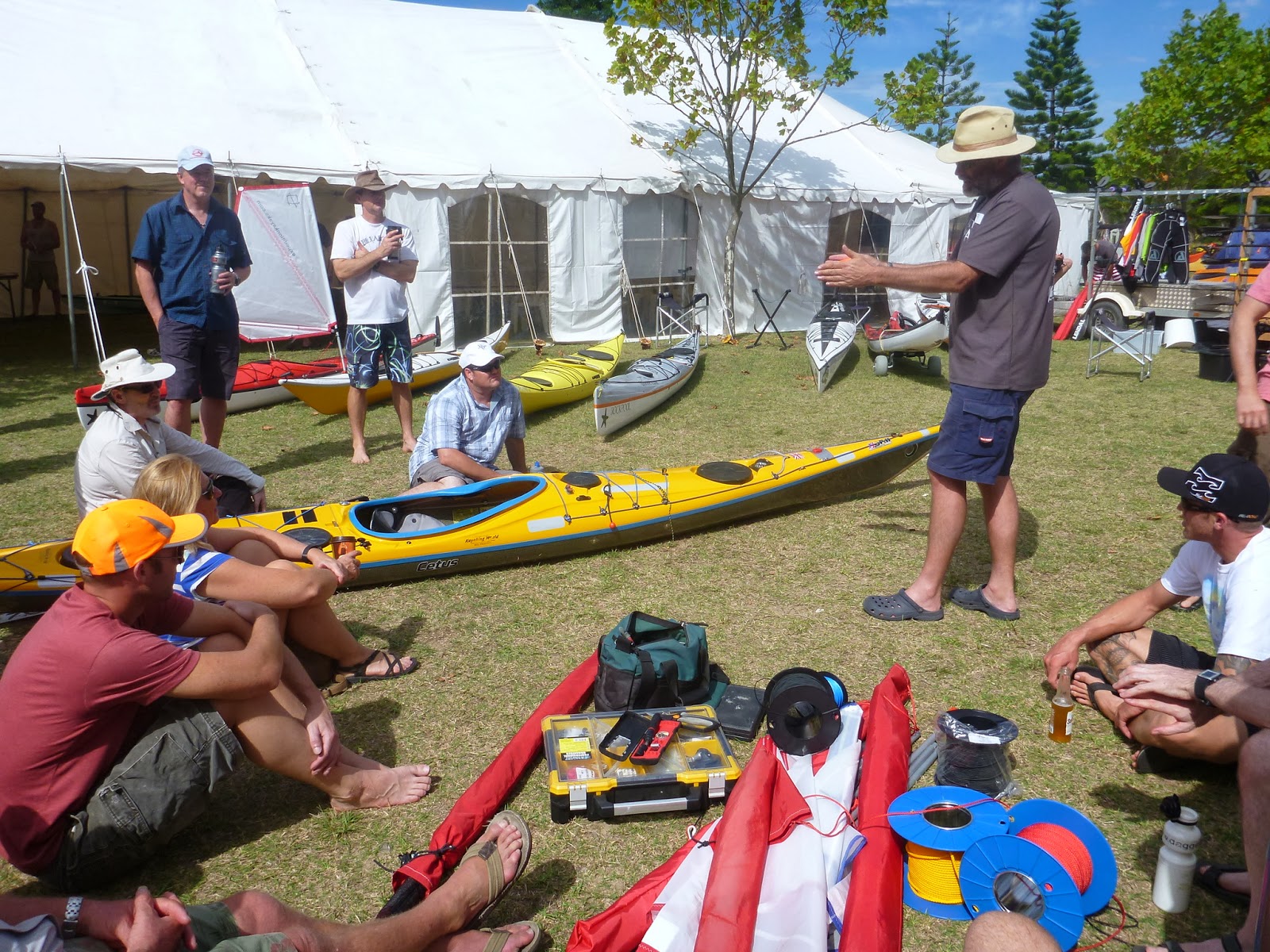 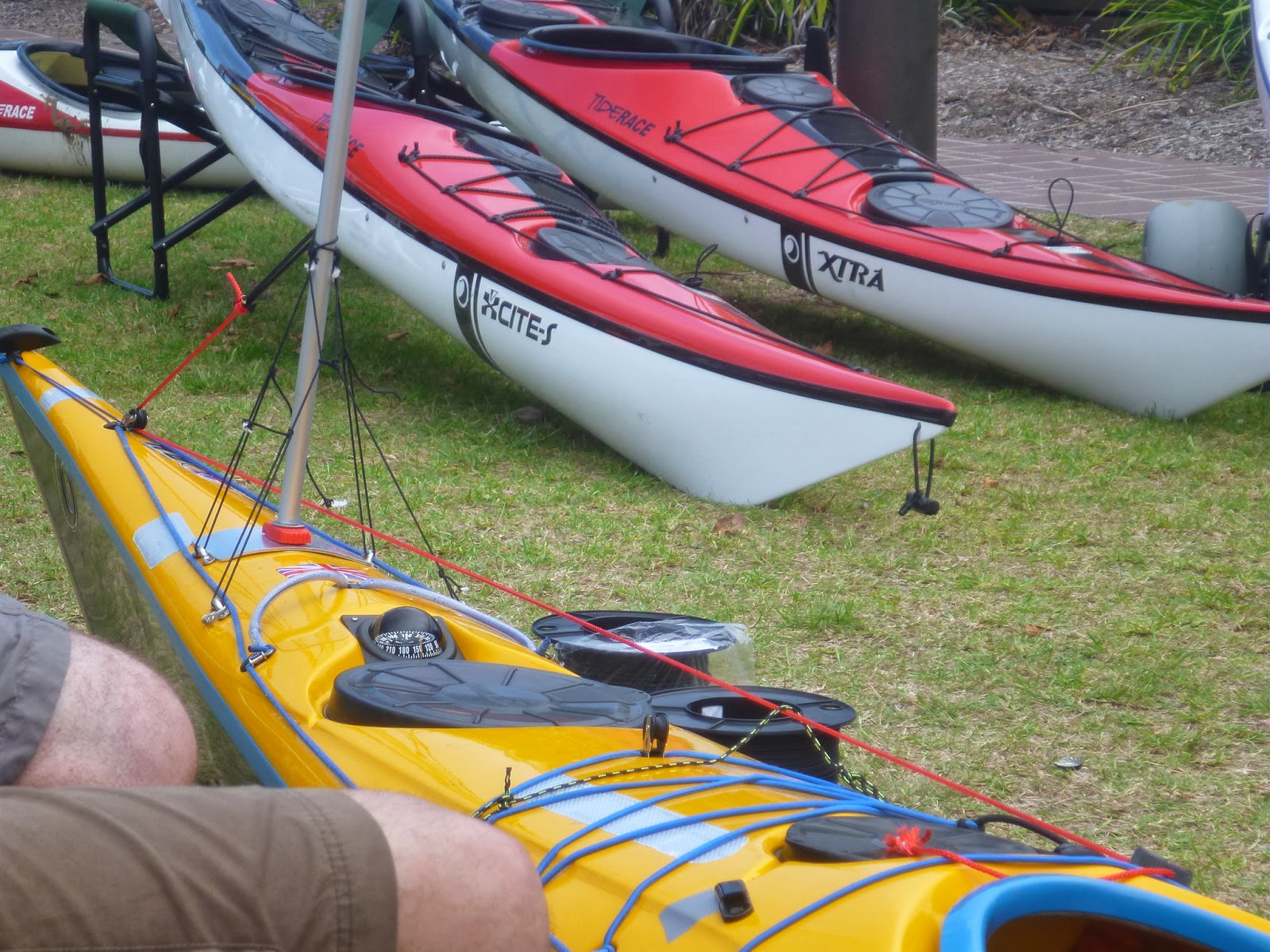 .. and Stuart Trueman's engaging presentation on what to take (and not take) on a kayak expedition ... 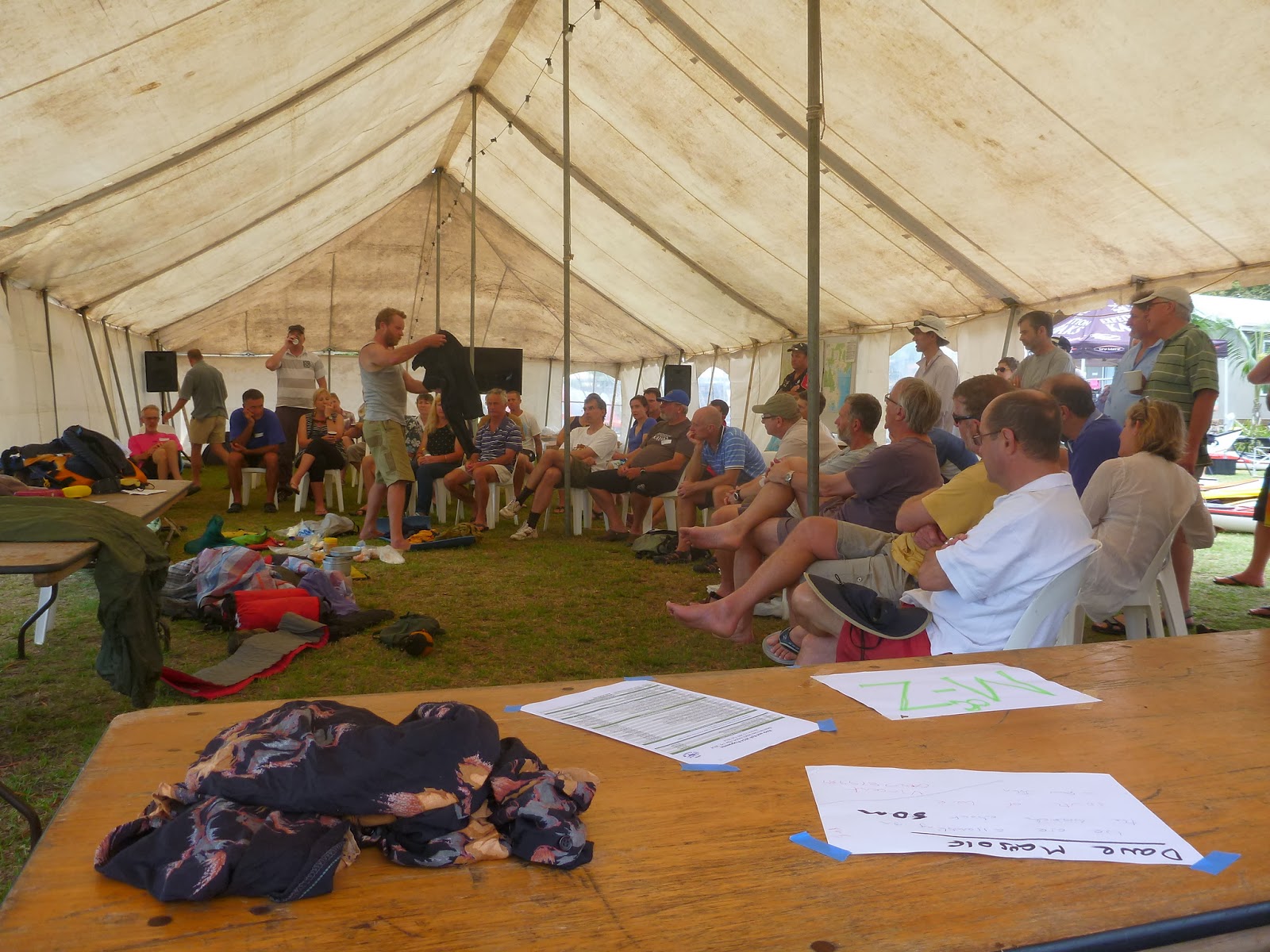 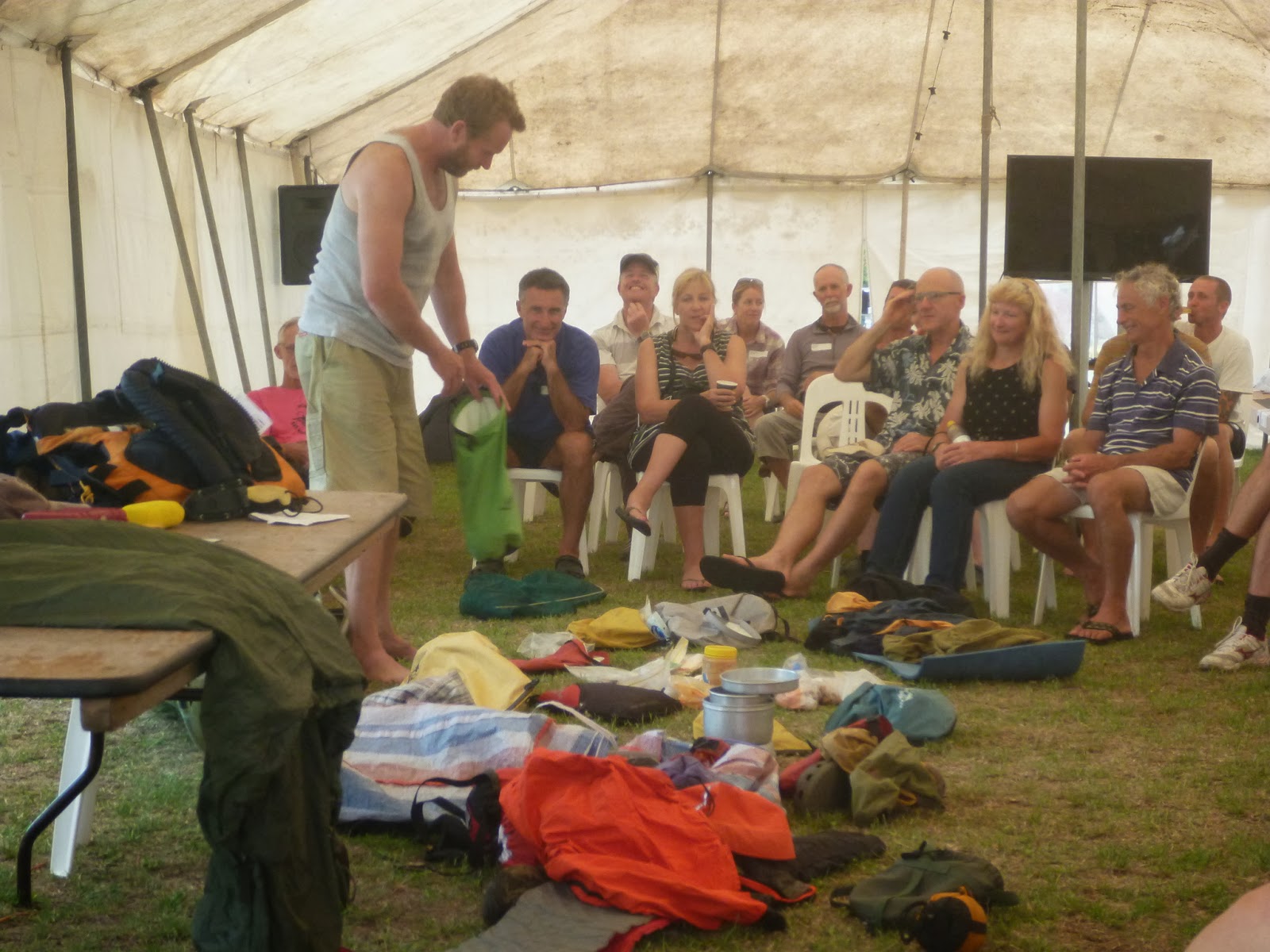 That evening, as luck would have it, I ended up joining Mick and his wife for drinks and dinner so I got to pick his brain on all things sailing anyway, as well as do my bit for the club by catching up with the NSW Sea Kayaking Club's website administrator (yes, I did just put that in there so that my club members would think that I did actually do some work on their dime) ...

The highlight of the day was without a doubt the talk from David Williamson and Ben Woodcock on their amazing long distance water crossings.  The trip they talked about was a crossing from Australia to East Timor in a bog standard double Mirage, the last section (and we're talking hundreds of kilometres) of this trip they paddled with a flooded day hatch with the boat virtually on or below the waterline.  Each time they changed paddlers (one slept in the front hatch while the other paddled in the back seat) they had to spend two hours pumping out the boat with hand pumps and they changed every twelve hours so that's two hours pumping for ten hours paddling.

The main rear hatch also flooded just before they got to shore and so they paddled the last ten kilometres in through the surf with the kayak virtually completely submerged.

It was just an amazing, amazing story of two incredibly confident guys and a great way to end the night.
Posted by Tassierambler at 18:01