So even before I'd reached Canberra, I'd abandoned my original ambition for the Kowalski Classic (which was to get fit and not lose too much time to Kim) and embraced the more humble goal of just getting to the finish line without dying.

Yep, my goal was just to get around the 50km course without giving up. 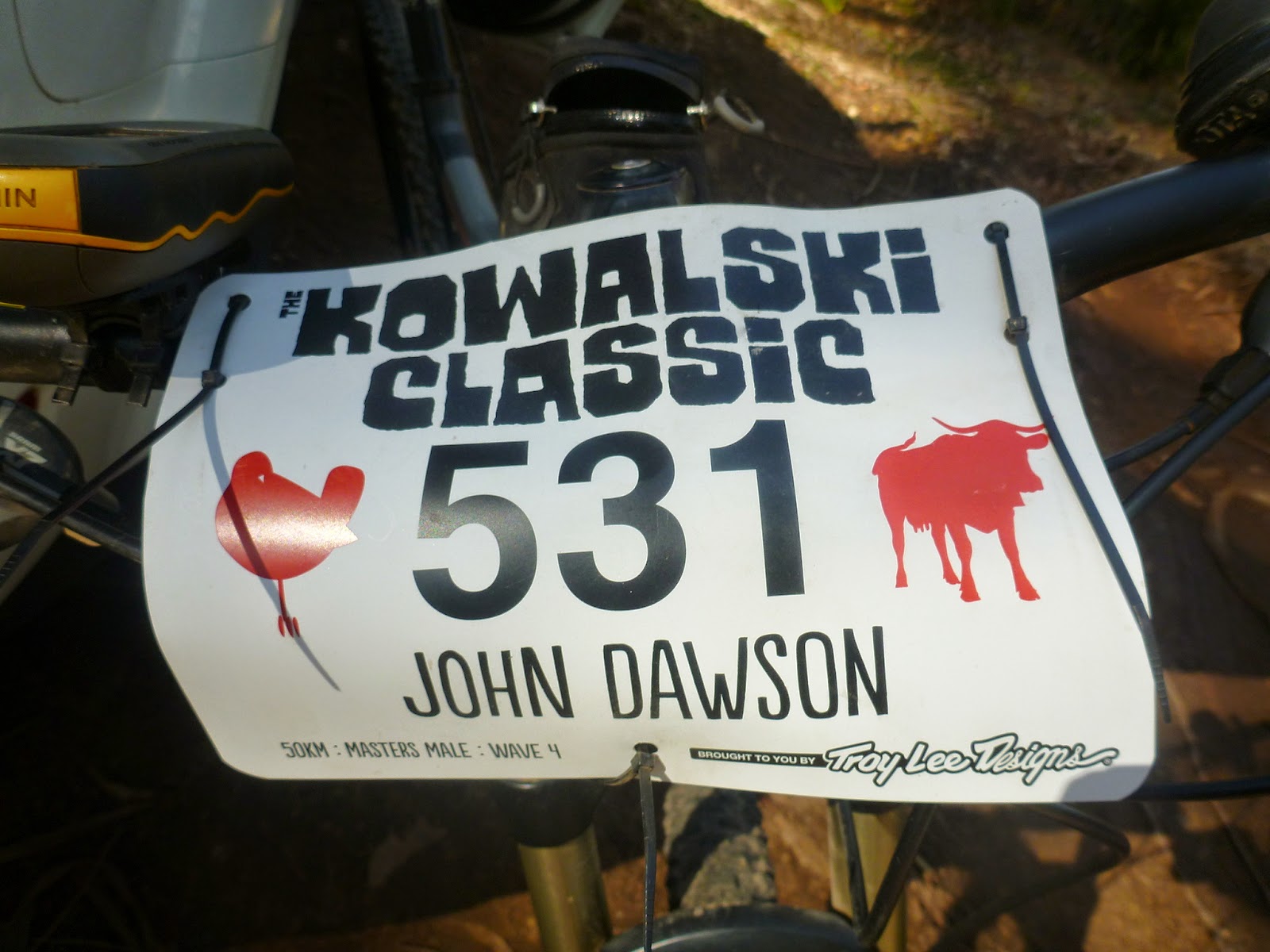 Problem was that whilst my ambitions may have been lowered significantly between the time I entered and my arrival at the start line, on the official starting list I was still supposed to set off with wave 4A (waves 1 & 2 being the elites and wave 3 being the more serious amateur riders) which would mean I'd have around two thirds of the 900 mountain bikers who were there for the race behind me ... all of whom would probably need to get past me somewhere in the day.

With over 95% of the race being on single track that would have made me the really irritating guy who holds everyone else up.

This was not the person I wanted to be, and that's why I found myself, 15 minutes before race start, sitting on my bike right next to the flag which marked the demarcation between the last wave 4 group (there were four - A through D) and wave 5/6 (who were combined into a single wave) wondering if anybody but me would notice if I set off with the wave 5/6 group ...

Then, after much fretting, I came to the realisation that it didn't really matter where I started because if my goal was to just finish the race, then who cared if I lost 12 minutes from starting in a later wave than the one I was supposed to (as it turned out I lost no time as it is all measured from when you go over the starting and finishing mat).

However, this dilemma does highlight a real problem with entering events ... not knowing what the impact of entering different waves means in terms of start times.

Despite what you're thinking, this is important stuff (it really isn't) and it is often overlooked by event organisers (probably because it's unimportant),  What they don't appreciate is that if you've got to race off (no pun intended) to somewhere else after the event, eg. if you're booked on the next nights ferry from Melbourne 700+kms away then you need to get away as early as possible and that means getting as early a start as possible.

In the Convict 100 race (which we did last year) there was something like a two hour gap between the 100km and 50km racers and even then there was a further 30 minutes (I think) gap between the first and last waves within the 50km race ...  so I left something like 2.5 hours later than I thought I would and those sort of things matter when you have to go places afterwards.

Now here's why this matters ... if you don't know which wave you're starting in then there's an incentive for slow people (like me) to overstate our abilities in order to get an earlier start ... and that's probably why you get so many irritating slow people in front of you holding up the race ... and I think we all agree that that is important and annoying.

With all that said, the Kowalski race has got it pretty sussed with just three minutes between waves, and so we only set off about 25 minutes after the elites, and I was only 12 minutes (four waves) behind Kim when I set off ...

And all of that above was really just to pass the time while I got to the starting line ...

Once the gun went off, my race plan went pretty much as expected.

I held position for the first 500 metres ... until we hit the bottom of the first little climb, and then I progressively fell further and further back in my wave as we climbed it.

About three quarters the way up that short hill, I was 99.9% convinced that there was no way, and I mean no way, I could get around a 50km ride today.  I was in fact 99.6% sure I wasn't going to make it up this first hill.  As part of my mental negotiations with myself, I made myself a pact that if I couldn't ride up this first (of what I expected to be many, many hills) then I'd turn around and DNF.  I was in a very bad headspace and was having to negotiate hard with myself to keep those wheels turning.


Secondly, by the top of the first climb, I wasn't just at the back of my group ... I was off the back and there were people closing in on me from the final group that had started three minutes behind me.
None of this was good when I was probably only 10 minutes into the race.

My little mental gremlins have been here before though, and I know that I really suffer for the first few kilometres of any race (ed - maybe that's why people warm up before a race you idiot ... hang on these blogs don't have an editor so who wrote this?).

I know this will sound cheezy, but as I was grinding my way up the climb I kept thinking back to the stories of bravery that I had read in the War Memorial the previous day and I just kept telling myself that if I can't even ride a frickin' 50km race then I am not even 10% of who I think I am (I'm very into percentages in this post aren't I).

So, with all that going on in my head, I did make it to the top of the first climb (without stopping) and then I also started to catch back up to some riders from my starting group as we start riding back down the single track.

I also, in turn, started getting caught by the faster riders from the group behind me, and being over-polite when it comes to racing,  and also being very conscious of holding up other riders, I would stop as soon as a rider got within about 10 metres of my rear-wheel to let them pass.  Then I'd wait for all of the other riders nearby to get past as well.

I did feel somewhere along this race that I was taking this to extremes when I stopped on the edge of the track for well over a minute letting people (who I later had to go pass again) get past me ... just because I didn't want to slow them down.

But that was in the future.

Back in the now, I was just trying to convince myself I could complete 50kms, and I knew this started by first completing 5kms, then 10kms and so on.

Now as you can see from my strava below, this course is extremely convuluted, and so it was quite common to be riding along in one direction whilst seeing riders all around you going in ten other directions. 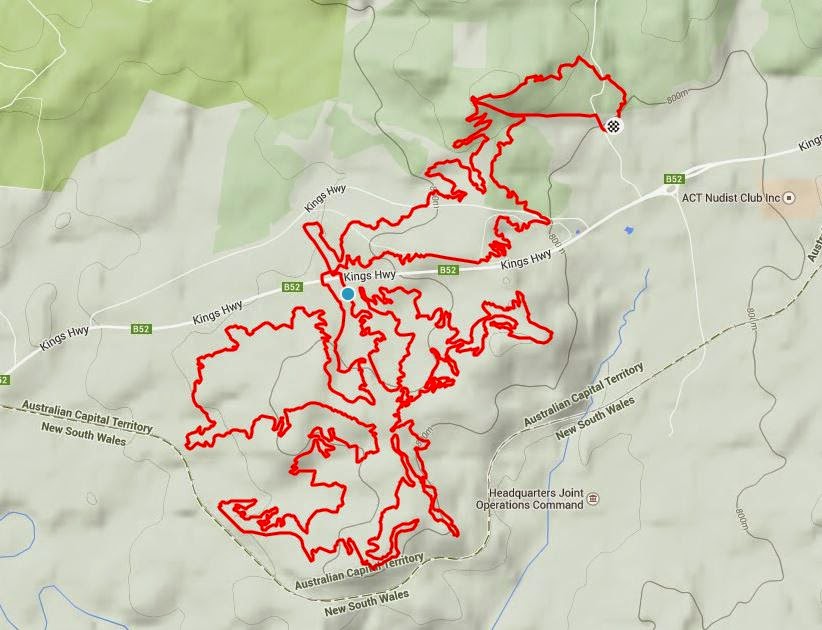 This was kind of cool, especially when I'd be riding along and I'd see huge long lines of people riding along (or stopped) in another direction and I'd think "cool, they're not that far in front of me, I'm not doing so bad after all" only to then find myself head off in another direction completely and later realise that actually they were a heck of a long way in front of me as I came back to that spot 30 minutes later.

After about 10kms, I sort of had my riding rhythm going, my breathing had settled down and although 50kms still seemed a long way away, it seemed slightly less impossible.

By 20kms, I was starting to gain a little confidence that this might be possible as I settled into a dispersed group of riders who were all passing each other as we hit our strengths (climbing / descending), but it still seemed a long way to the finish.

I was really enjoying the trails though.

At about 22kms I saw a whole lot of riders stopped at the half way point and thought "you beauty - I'm actually 3kms ahead of where I thought I was, my GPS must be missing corners". 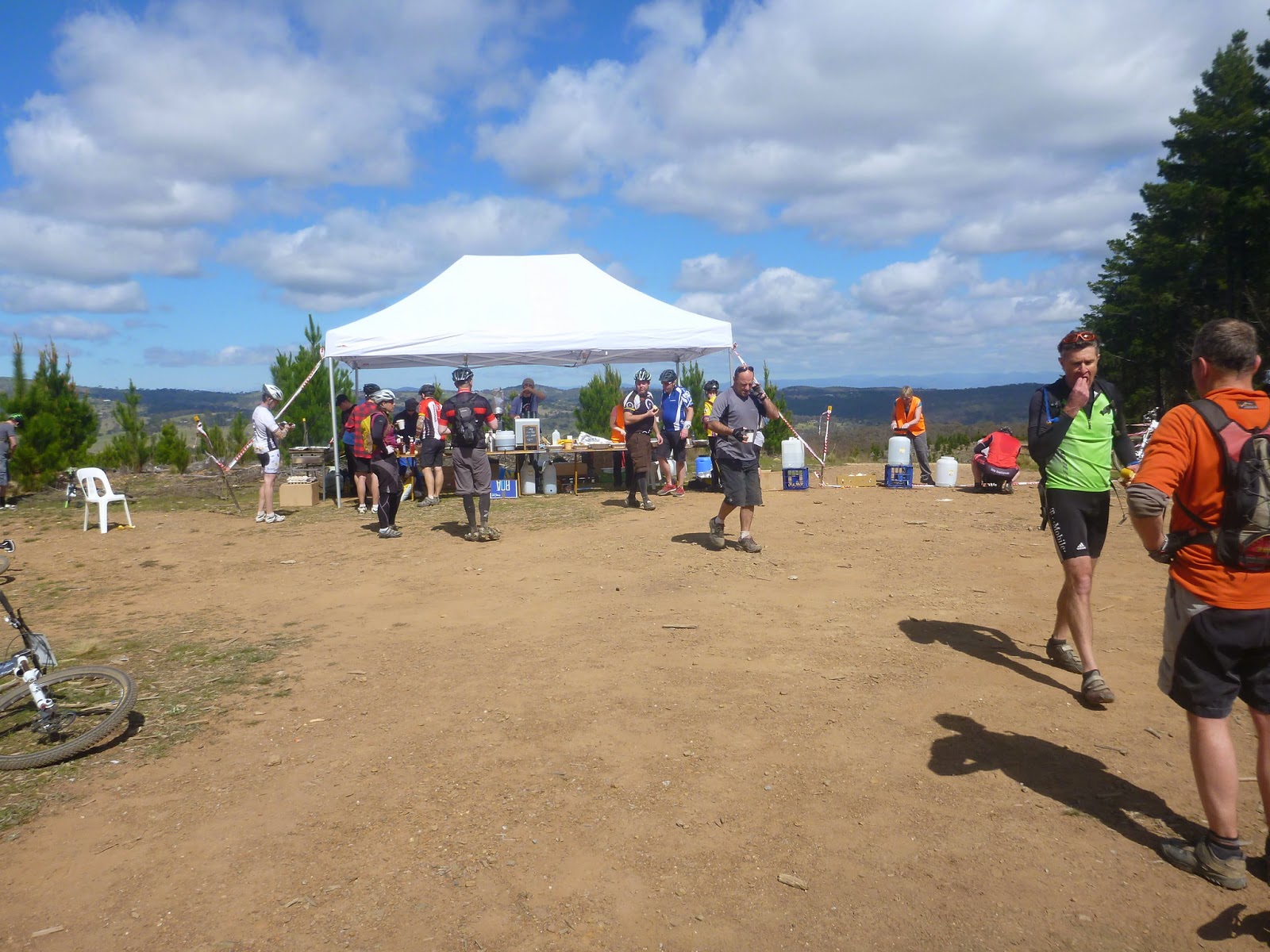 Then the track headed off to the left ... and three kilometres later, after a nice long out and back ride, the track actually delivered me to the half way point - right where it should be ... 25kms into the race. 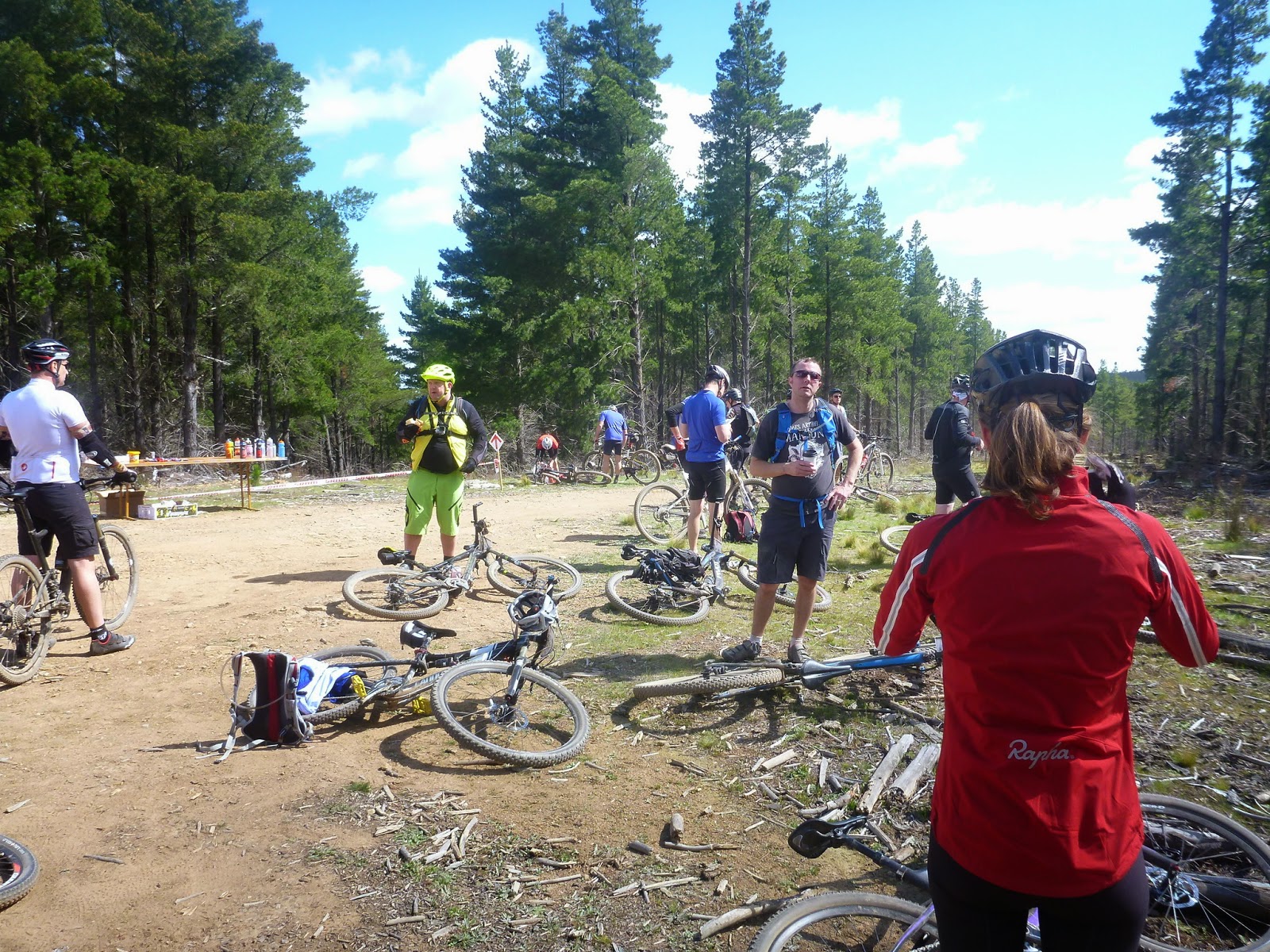 After refueling I enjoyed a nice run down a gravel road, before turning into the single track and onto what I expected to be the start of the hard part of the race.

Now at the start line, the announcer had proclaimed this as one of the hardest races in the region and I'd looked at the course profile and although it looked fairly flat for the first 50km (other than that first climb), there looked to be at least four more similar climbs in the last 25kms ... and that had me worried.

But the thing is, these climbs were all on single track that was designed to deliver riders to the top of a climb as easily as possible and so, now largely riding by myself, I enjoyed what the trail had to throw at me as I chugged my way through the 30km and then 40km mark.

There was a couple of final climbs in the last 5kms (incuding a partial repeat of that first hill - which this time I pushed), but before I knew it I was hurtling down the last descent of the day and across the finish line ... in just under four hours.

It was a definite back of the pack race-pace (Kim finished a full thirty minutes faster than me), but as we got talking about the course I realised our rides were chalk and cheese .. and I got the cheese.

Kim had set off in one of the largest race waves and as a result had found herself in a large conga line of riders for virtually the entire 50kms.  She'd enjoyed the race, but spent a lot of time riding below her natural pace, collecting a lot of dust in her face and most frustratingly, whenever she had come near something even vaguely technical, she had to walk it due to all the riders in front of her having been stopped by that one person who didn't know how to ride over a 5cm high log.

I on the other hand had pootled along at my own pace, and whilst I had lots of riders around me, very few were actually riding with me, so I'd been able to pretty much pick my own pace and enjoy the ride, dust free and alone.  Most importantly I hadn't held up a single rider all day.

Who knew that the slowest riders could be the winners!