When I heard about the Zeehan MTB Hub, I immediately tried to figure out what trails might be involved ... and that started with the question "If I were planning a bit of mountain biking in Tasmania, what areas might I be enticed to head over to the West Coast to ride?" 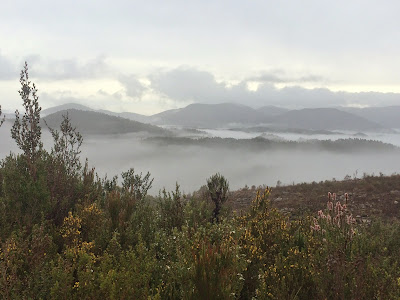 I quickly concluded that Montezuma Falls and Climies Track would have to be in the mix, and that also makes you think about the Melba Flats Tramway which would make a great connection from Montezuma's to Zeehan if that's where the hub was based.

You'd also feel pretty confident that they'd want to include the Spray Tunnel, and if you go out a bit there's the beautiful Sterling Valley Track ... but then what?

I had lots of ideas (I won't bore you with them here) but when I got to see the list of potential trails, well there were a couple of inclusions that surprised me (mainly because I hadn't heard of them), and with a weekend to spare due to the cancellation of the Tullah Challenge, and with plans to head over to the West Coast anyway, I thought I'd go and check them out.

I started with Heemskirk Falls ... 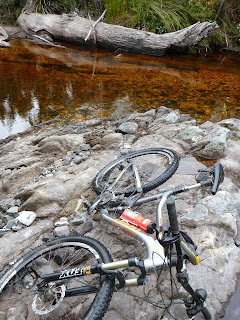 And you'll notice that the photo above is not of Heemskirk Falls, and that's for one simple reason ...

I never got there.

To be honest, I never got even close.

You see when I started looking at routes to the falls (once I'd actually found out where they are), it became obvious that no one was really sure what the "Heemskirk Falls" route might be (yes that is why I chose it first).

Even more worryingly, there seemed to be a strong line of thought amongst the locals Zeehanites that the proposed track was actually supposed to be to the Upper Heemskirk Falls (I was even sent a map to this affect) ... and so with lots of exciting potential route options, I GPS'd the trails I thought had the best chance of taking me to either of the falls and I set off to ride them ...

Ride one was the blue loop to the South of the Heemskirk Road out towards Upper Heemskirk Falls, and I'd chosen this route because it followed the route I was provided by the local business association and I figured the locals should know best.

Unfortunately, there had been a slight loss of information between what the guy who had been on the route had described and what I was told, and whereas I thought the route I was following was the old abandoned Tasman Water Race (shown roughly in red in the above map) it turned out it wasn't.

I later learned back in Zeehan that the Water Race is only still shown on the 1:100000 tasmaps, and that when I got to the first junction about 2kms into the ride, I should actually have jumped off the track onto the water race, not followed the left fork towards the river where I expected to pick up the water race.

I still had a great ride, by which I mean that just before I got to the Heemskirk River, the track disappeared and I ended up carrying my bike (sometimes above my head) for about a kilometre through thick scrub and overgrown tracks, I walked through a jack jumpers nest and got stung all over my legs, I waded through two deep creeks admiring all the tracks left by snakes entering the creek (while at the same time wondering exactly where they were now) and I crashed badly when plummeting down a track and hitting what can only be described as super glue masquerading as white gravel.

I didn't get however anywhere near the Upper Heemskirk Falls, which didn't worry me too much, this was exploring and it was fun exploring ... 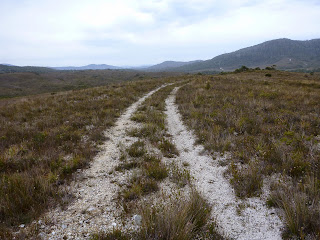 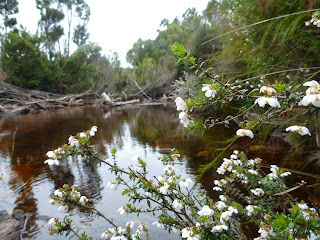 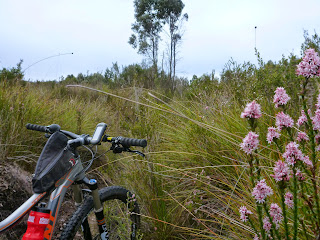 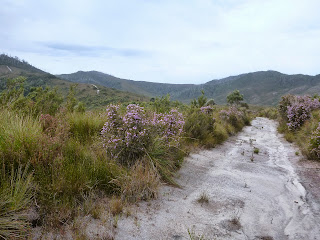 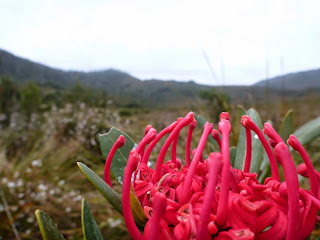 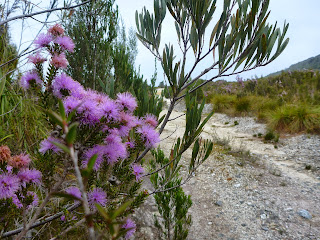 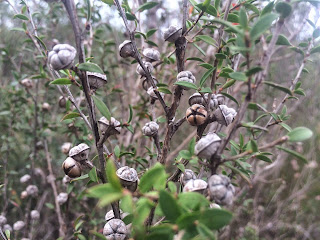 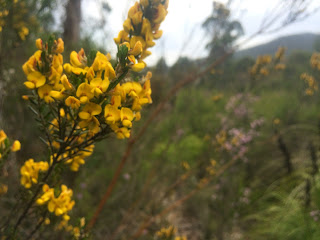 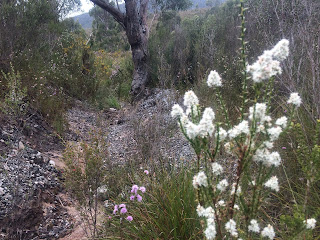 By the time I got back to the car I was smiling ear to ear ... but I was also bruised, scratched, bitten, sore and wet, so not wanting to give myself time to start thinking about those little negatives, I instead headed straight to the start of the longer (and more promising) track into Heemskirk Falls, threw on my backpack and took off.

Somewhat regretfully, I choose to take the same backpack as used on my previous ride, rather than my carefully prepared second pack which I had put my pack raft in just for this trip...  I was to seriously regret this about 4 kms later when I pulled up next to the Heemskirk River for the third time today and saw this ...

Yep, Heemskirk Falls was about 400 metres downstream that way, and with a packraft it would have been a perfectly pleasant adventure getting there, but without it, I just wasn't tempted.

The ride in (and I guess out), wasn't particularly scenic, was it was wonderful riding fun, at least after the first kilometre or so which was pretty much all an uphill grind. 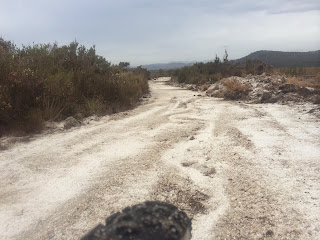 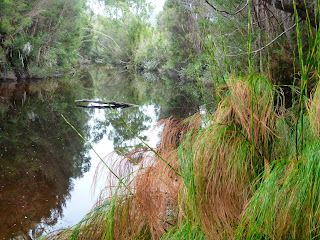 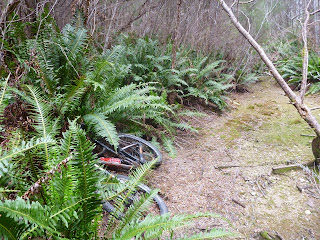 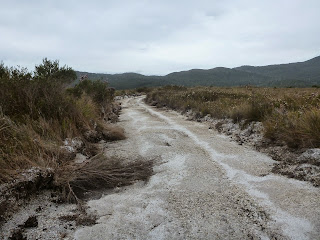 As to my third soujourn into Heemskirk Falls from the shorter eastern route, well it looked promising if you looked at the walking track layer on TheList.tas.gov.au, but the reality on the ground was that about 2kms from the highway, it became extremely overgrown and after pushing in for a bit more, then abandoning my bike and just trying to walk in, I decided I'd been scratched and cut enough for one day and headed back to Zeehan to find food and check out the Mineral Show which was on this weekend ...

As to my thoughts on this track, well it's hard to know without getting to either of the falls, but the glimpses at the river were really nice, and I think with a bit of new track building closer to the river (also creating a loop) and maybe an extension linking it to the Mt Heemskirk track it could have potential.

As for me ... now that I know where the water race is, I'm curious enough to want to go back for a wander up it (probably without the bike).  Similarly, I'd like to walk back into the top of the Heemskirk Falls with a packraft and check it out, maybe trying to follow the stream back up to the road ...  I love it when a days adventure pushes the fog of exploration out just that little further, tempting you to go on ...
Posted by Tassierambler at 14:00