Some opportunities you just can't miss ...

Yes, getting a photo at this new sign at the Zeehan Caravan Park is one of those opportunities, but a better example might be taking advantage of a work trip over to the West Coast to go check out Heemskirk Falls.

Now, you may recall that on a previous adventure, I'd got oh so close to the falls, but ultimately was defeated by a lack of track down the last four or five hundred metres.

Well having learnt my mistake, this time I was more prepared ...

It had been a long day (starting from Hobart), but we'd wrapped up our series of meetings by 3.30pm and I was back at my hotel by 4pm, so I grabbed my hotel room key, changed into my cycling gear, pulled the mountain bike out of the car (hey, I figured I was over here to talk mountain biking so it was only proper that I bring the bike for street cred) and set off to the falls.

It's about 20km by road to the Heemskirk River from Zeehan, and from there it's only a short few kilometres of riding over the button grass plains to get back to where I'd been to before ... this being as far as I could go on a bike, but with the river curving out of sight towards the top of the waterfall ... 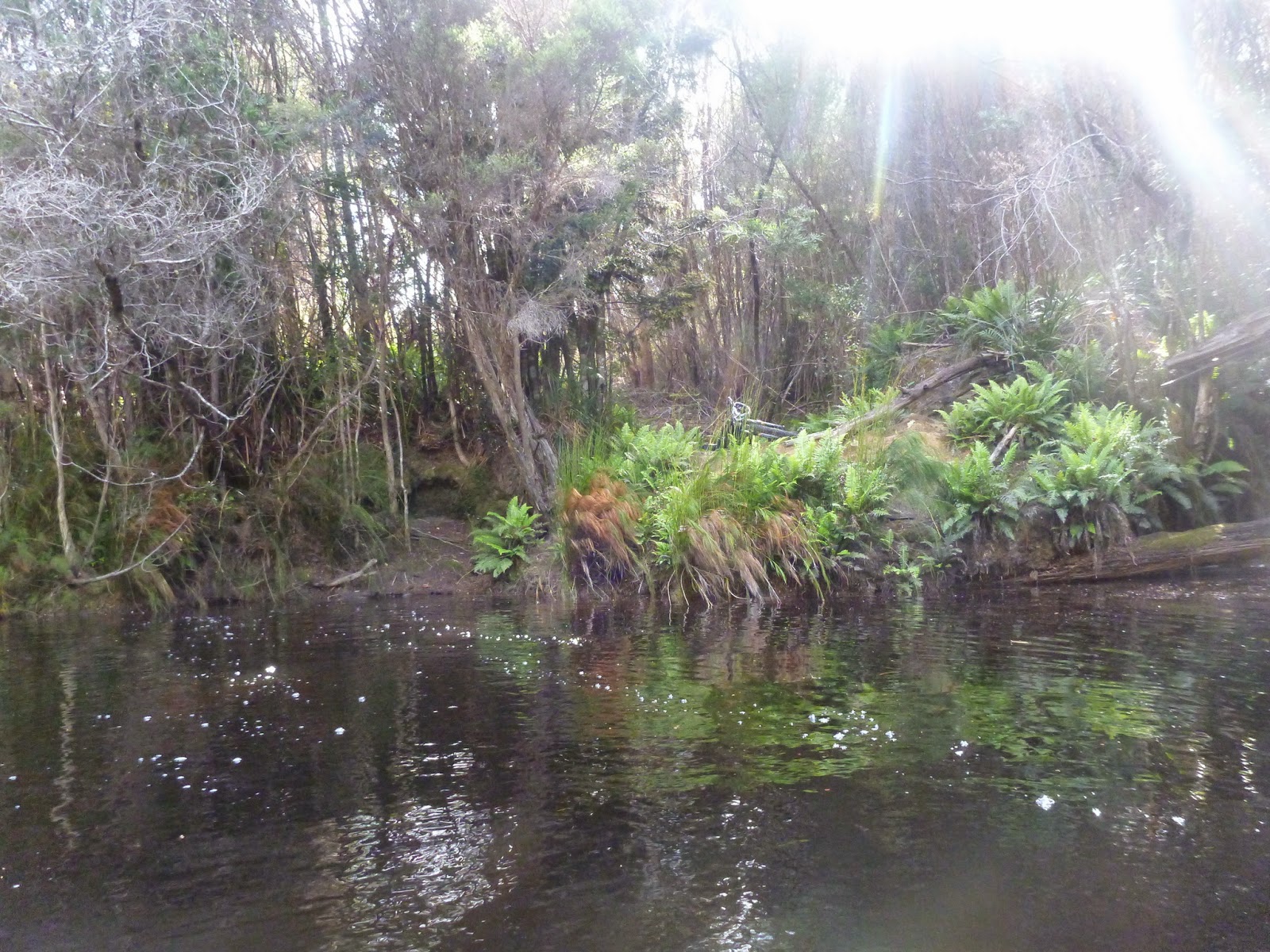 A few leaches came to visit me while I pumped up the packraft, and some very rude animal had used the area I was trying to pump the raft up on as a toilet recently (and it had a bad case of diarrhea), but fortunately I was quickly on the water (without any smelly 'additions' to the raft) and heading off ...

I felt just like Huck Finn as I headed off around the first corner and saw the river disappearing off in front of me ...  adventure awaited.

Just not as much of it as Huck had with the Mississippi ... in fact, as I've already mentioned it's only about 500 metres from the track end down to the top of the falls, and if you didn't mind a bit of wading and maybe a short swim or two, you could easily walk the river down to the falls.  Most of it would be around knee deep.

There was one short ripple (which I had to pull the raft up on the way back up the river) but otherwise it's pretty much flat with slow flowing water and just a few trees to get over on the way down to the waterfall ...

Then it's welcome to disappointment-ville.

At least it was for me.

You see if you google "Heemskirk Falls tasmania" and look at the images, you'll see lots of beautiful waterfalls ... not one of which (as far as I can see) is actually Heemskirk Falls, and you also kind of figure that if it's been nominated as a potential destination for a new mountain biking trail then it's got to be something spectacular ...

But this is Heemskirk Falls ...


But, in fairness,  now that I knew what it looked like, a bit more searching turned up this photo from the State Library which shows the falls in its glory days before the Pieman was dammed (unfortunately it's copyrighted so I can't show it here - you'll have to follow the link.

Now that I would have ridden down to see, but not what is there today, at least not now that I know what's there.

But fortunately for me, I didn't know what was there, so for me at least there was still an adventure to be had.

Yep, maybe this isn't the end - maybe I can go on for just a little bit further yet ...