A metre matters ... but doesn't location as well?

I'm going to go off half-cocked here and say that I saw this sign this morning and I was p*ssed ... 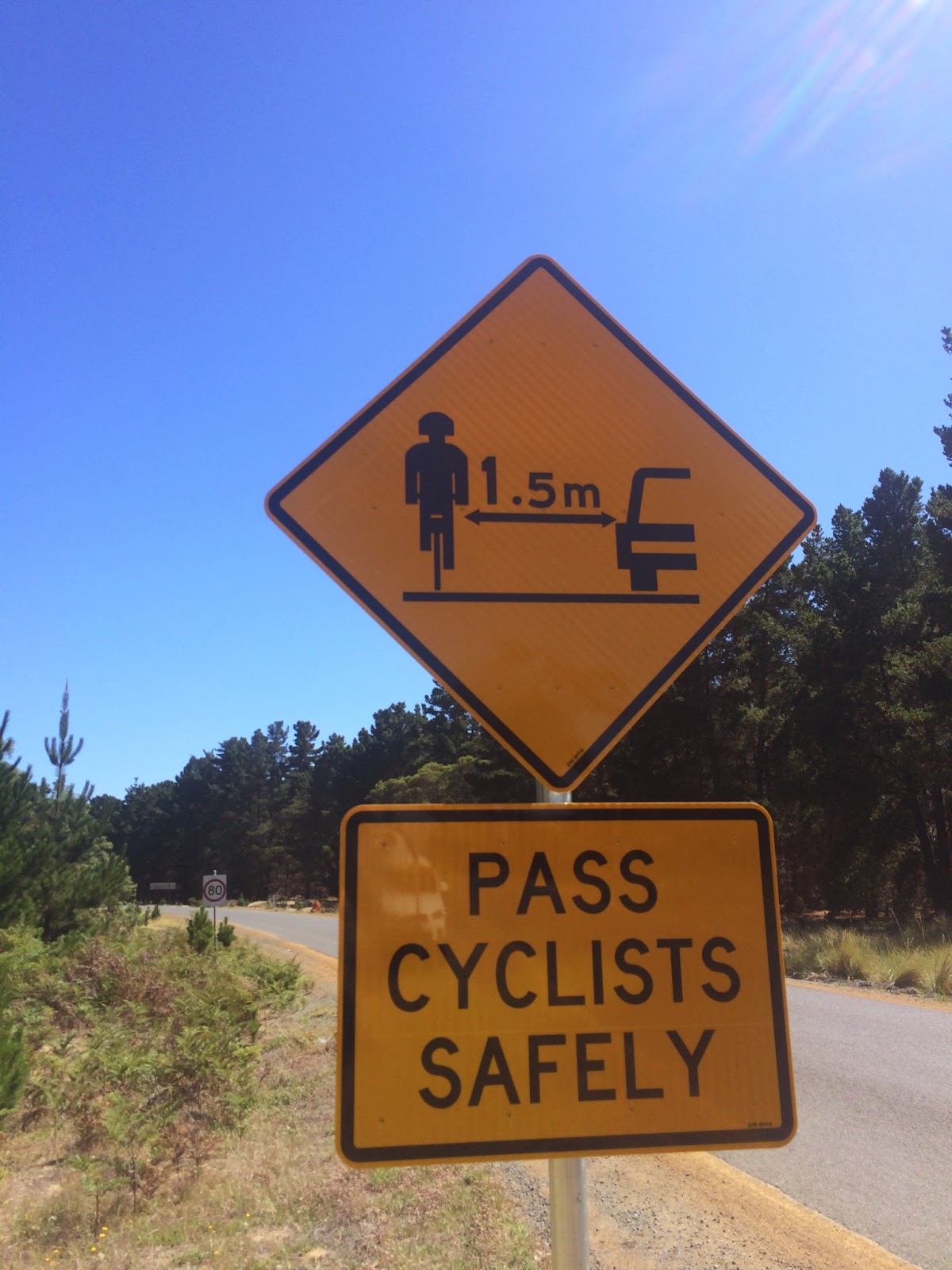 But to explain why, I probably need to go back a few steps and say that a few months ago (or it may have been weeks - I lose track) I saw that the Tasmanian Government was going to be putting up these signs as part of a road safety campaign.

And I thought this was a good thing.

So good in fact that I made the effort to contact some people and suggest a few routes where these signs could be located.

Yes, I'll admit that my suggested locations did have a strong (OK, complete) correlation with where I ride, but there was a good and logical reason for this - research has conclusively proven a 100% correlation between where I ride and where I am likely to be hit by a car, which means it makes sense to put the signs up at locations where I ride.

Now before any of you come up and join me on my high horse (perhaps espousing that you might actually like some signs where you ride as well) I will point out that I ride a lot of places, and I do actually have a pretty good feel for some of the less safe places to ride on Tassie's roads (especially around Hobart) ... and so my suggestions were probably quite reasonable.  They may even have been where you might have wanted one as well, which would be dandy, just lower on my priority scale.

But .. and this is a big but ... it didn't matter anyway because when I raised my suggestions, I was informed that discussions had already been held with 'key stakeholders' and 'peak cycling bodies' to decide where to put these signs and it was all wrapped up and my input wasn't needed.

I was shattered (mainly about not being considered a key stakeholder, but also about the decision having already being made as well).

Which brings us to today and this frickin sign ...

Did they put it on one of the many dangerous pinch point commuter routes heading into Hobart?

Did they put it on a major arterial route so it would be seen by lots of people?

Nope there as well. 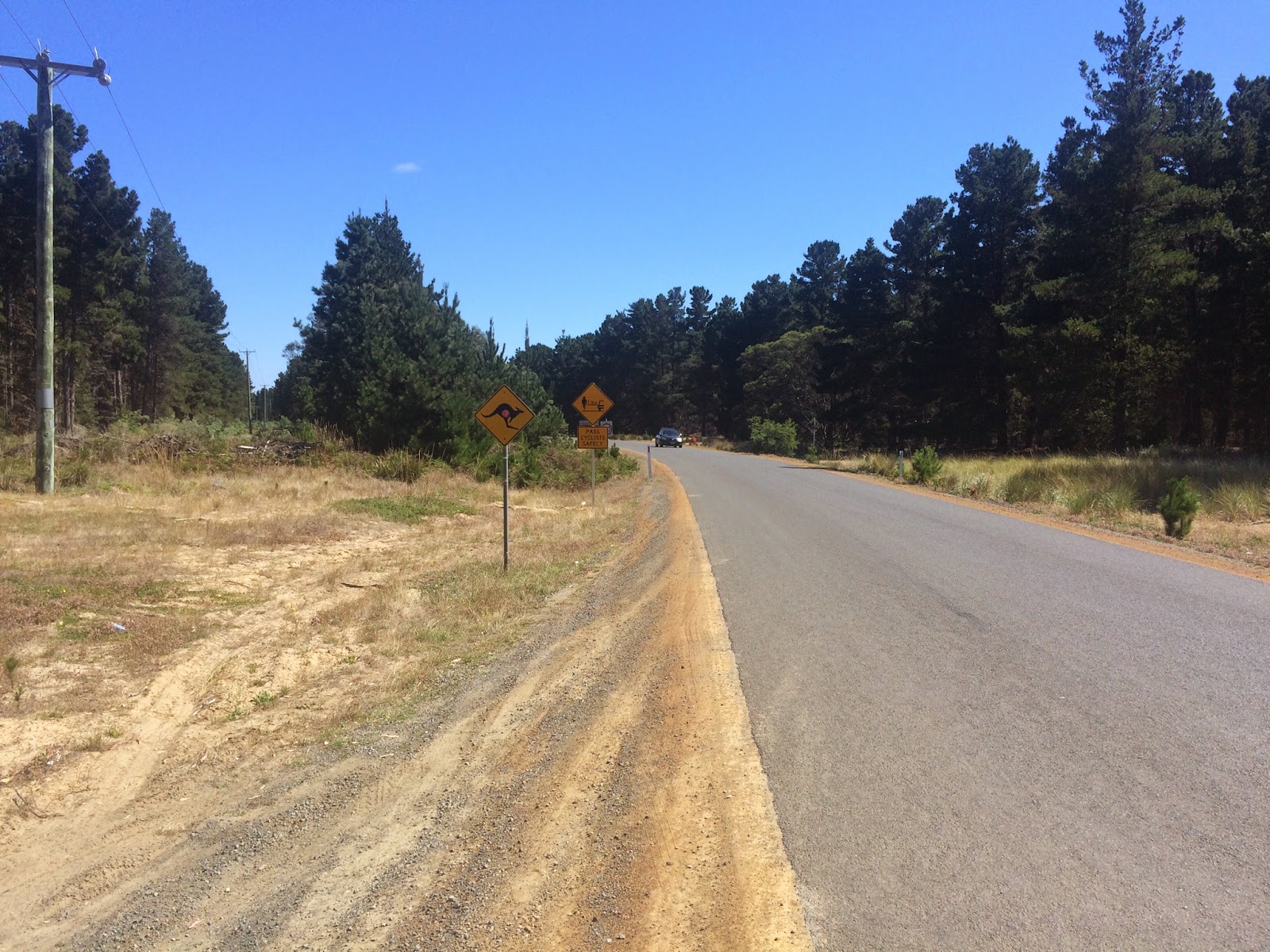 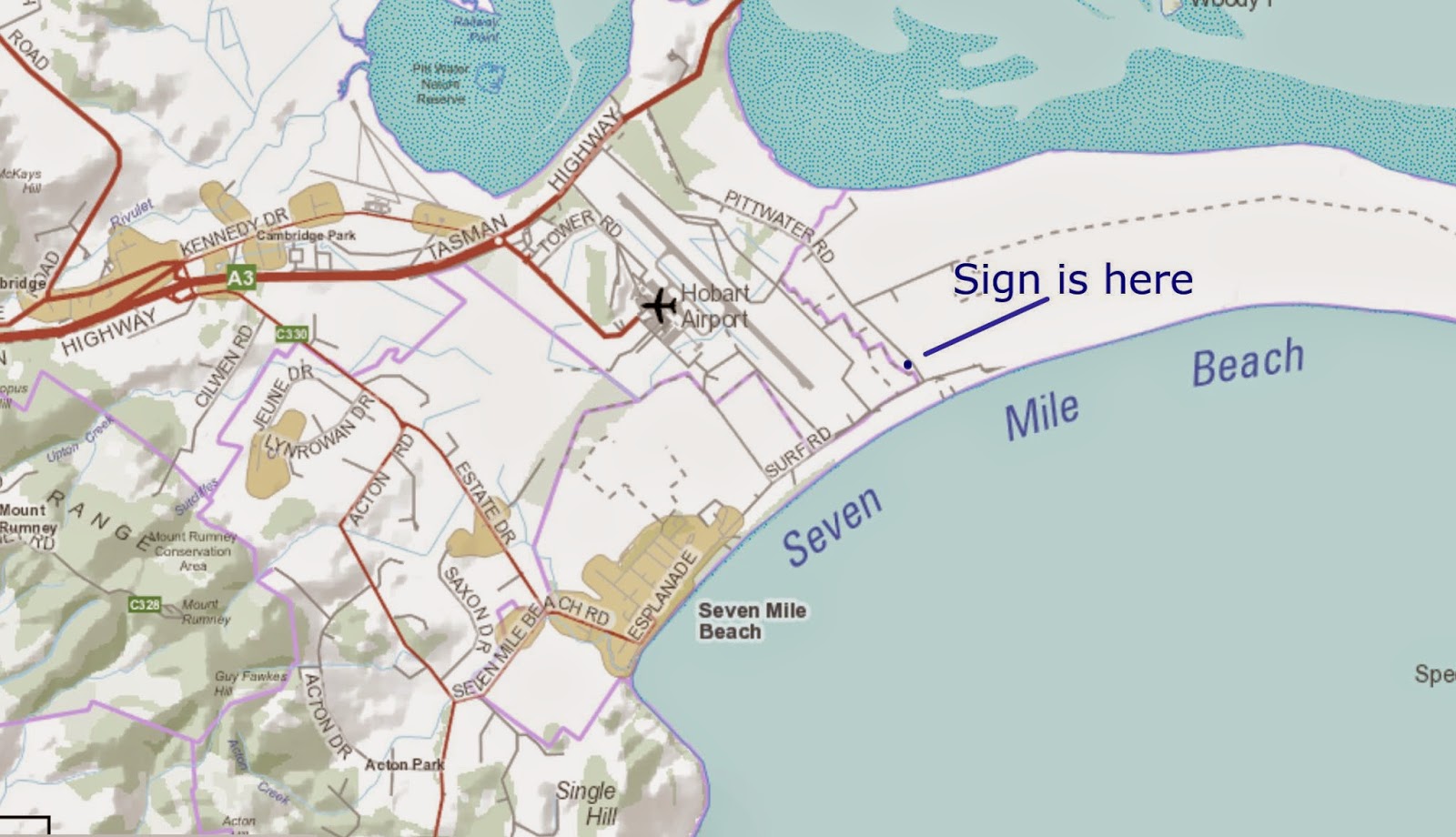 Yep, they've put it at the end of Pittwater Road near Seven Mile Beach.

I'm happy to stand corrected, but I wouldn't say so from my experience.  I've certainly never felt threatened cycling along there (except maybe by the rough surface).

Maybe there's lots of other signs elsewhere and so I'm being harsh, but I'd like to know where they are, because I compare this sign's location to the section of road between Rokeby and Lauderdale (which is where I suggested a sign should be put) and I think ... FAIL!

And that's my half-cocked opinion.
======
POSTSCRIPT ... All is saved ... I saw this posted the day after my post ...  http://www.transport.tas.gov.au/roadsafety/roads/cyclist_warning_signs , there are lots of other signs and they do look to be well placed.  There you go - who knew I'd admit to being wrong.
Posted by Tassierambler at 18:32 3 comments:

Kim trusted me with her precious monsters the other night ...

Now overall Ollie and Ella are really taking to the new house, and they particularly seem to like the lounge-room where they can perch themselves up on the couch and dog bed and stare out the window at everything that is going on in their domain ...

So I thought everything would be tickety-boo with our night without Kim, but I hadn't factored in the small child problem.

You see the problem was that like most young children, they weren't quite sure what was going on ... and whilst they were initially excited and happy when I got home from work, you could almost see the question start forming in their little heads ... 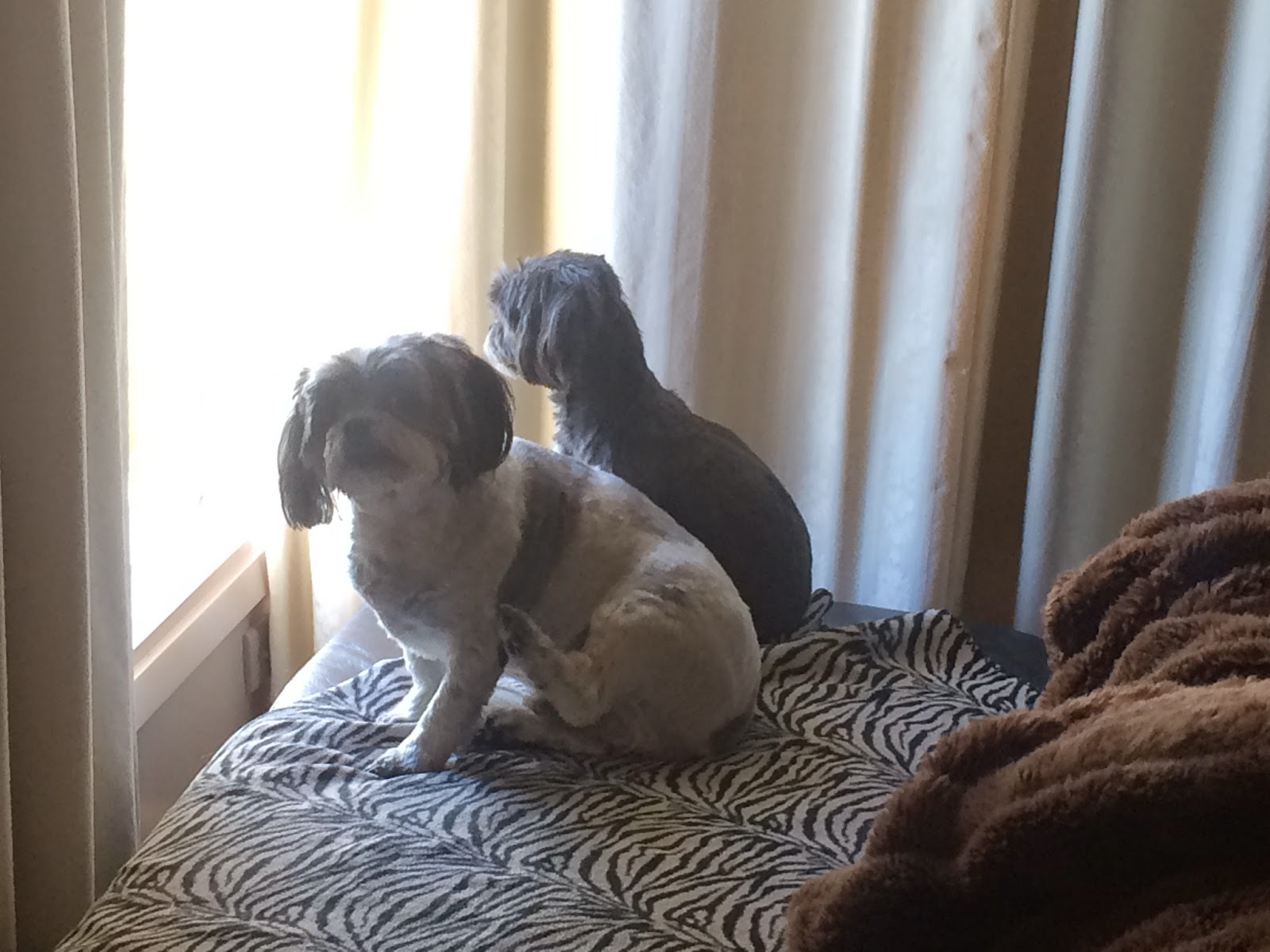 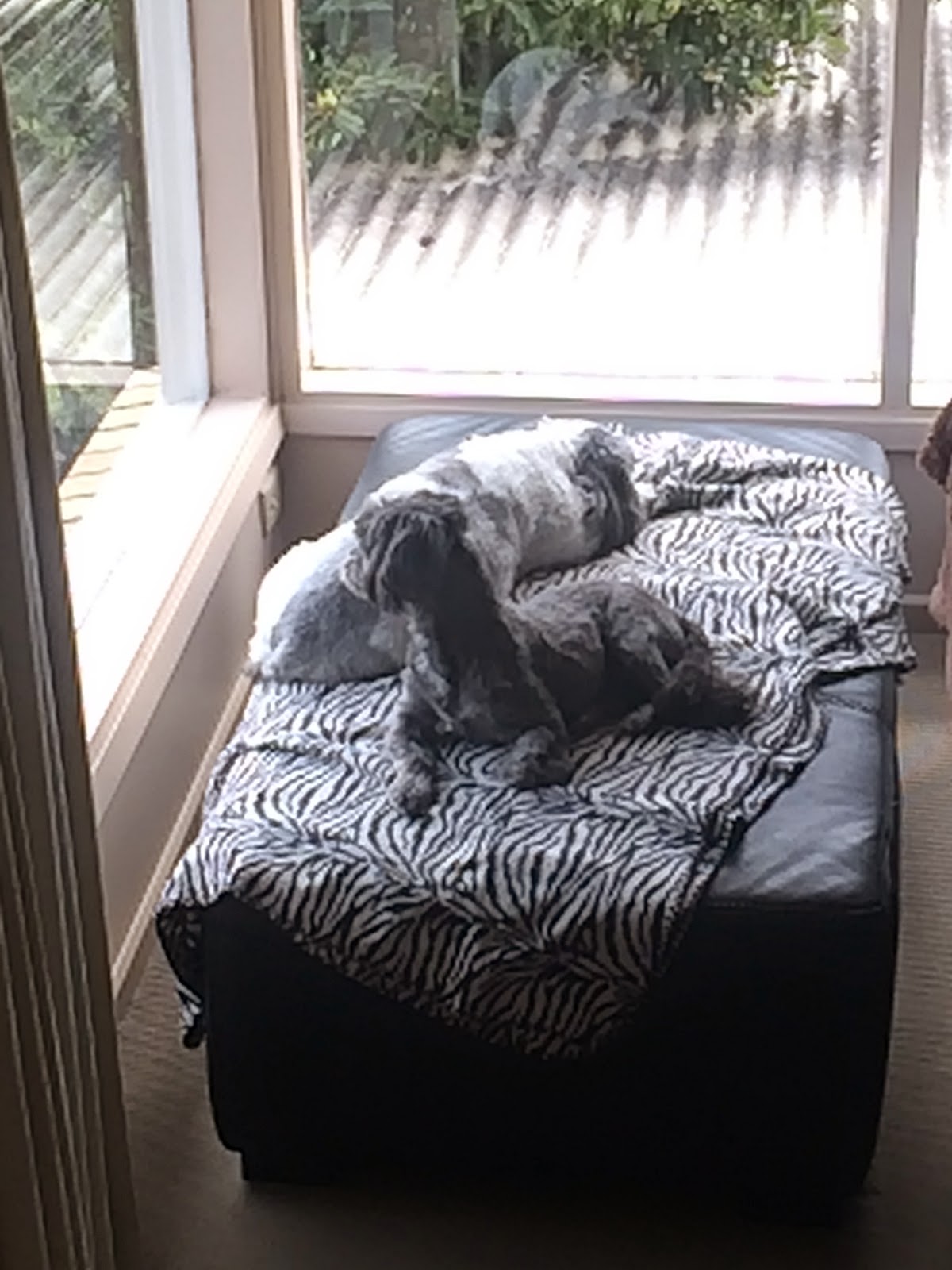 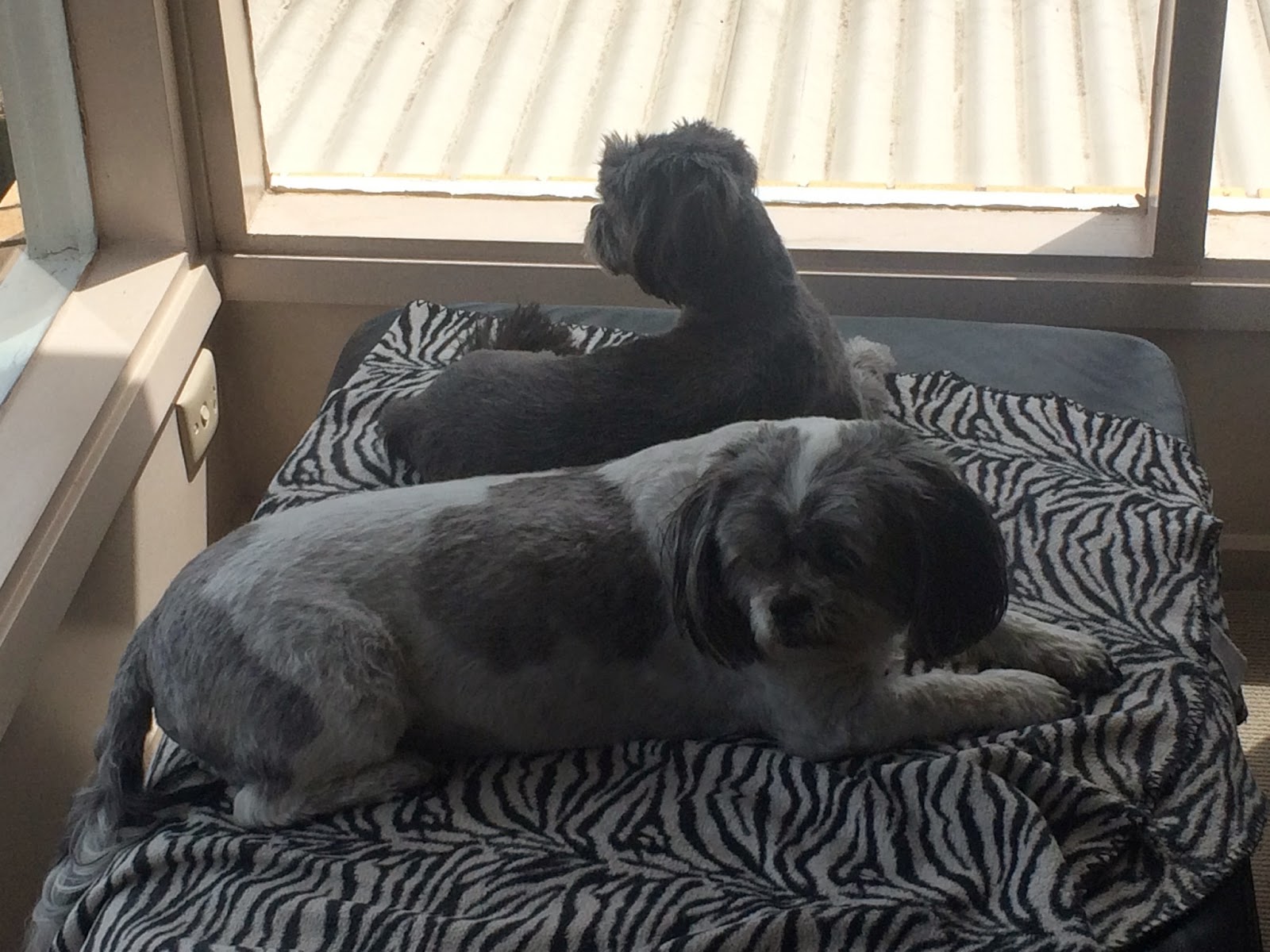 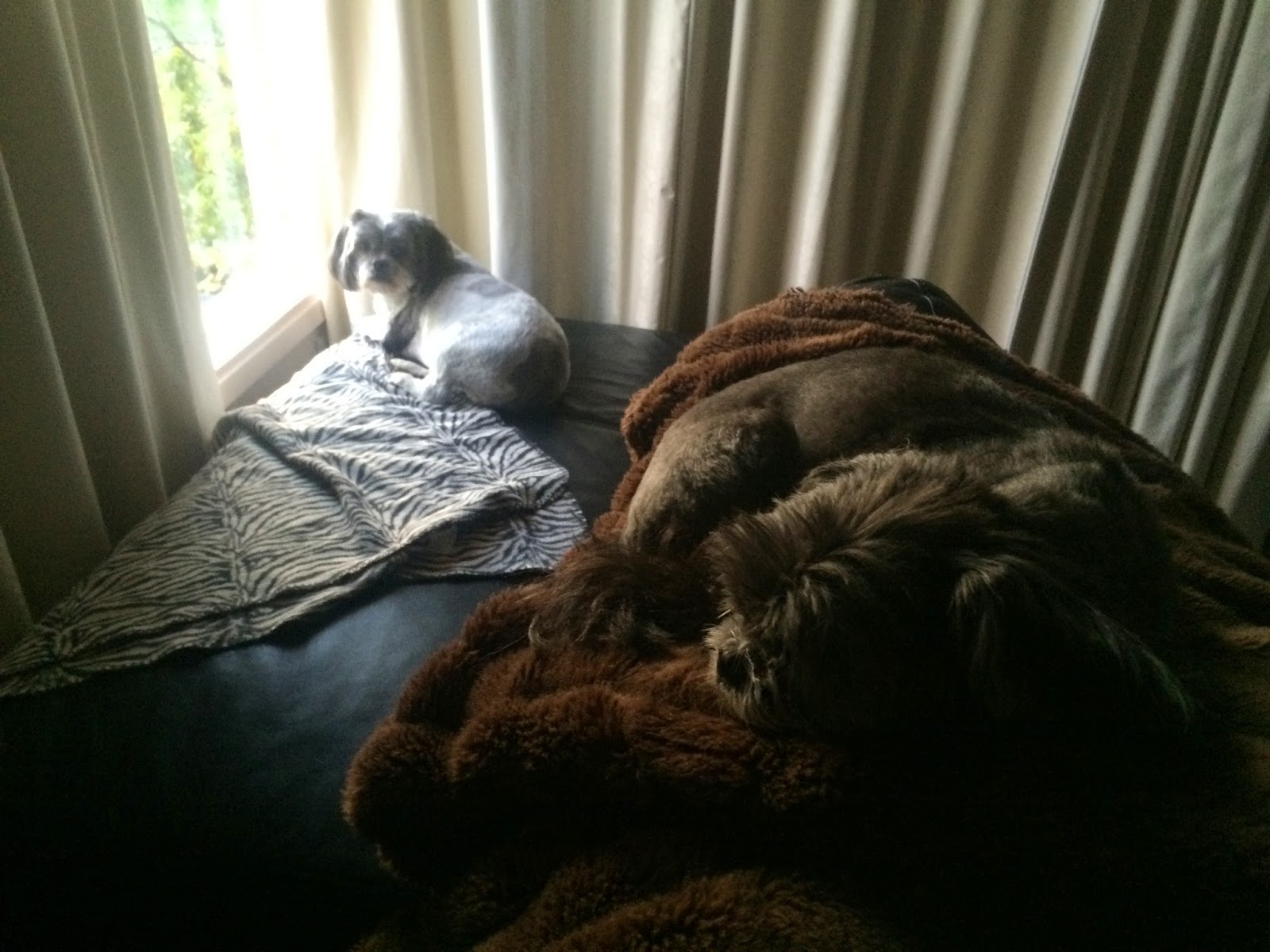 At around 9.30pm, I finally pulled the curtains shut and the first thing Ollie did was jump off his bed and try and find a way under the curtain so he could continue his vigil.

It was so sad because it was too dark for him to even see anything outside the window.

I finally got Ollie up to the bedroom where he usually saunters himself up to the top of the bed, throws himself down with an "oh if you must" look on his face and proceeds to roll over onto his back waiting for a tummy tickle ... but this time he perched himself on the very bottom corner of the bed - the one closest to the door  - and he just sat there staring out the door, waiting for his mum.

Postscript: We all had a very long night as the dogs ran up and down the stairs every time they thought they heard something, but I'm glad to say that they've had a few more nights without mum now and have settled into the routine a lot more.  Ollie's even decided that even if mum isn't here, I'm still allowed to give him his tummy tickle.
Posted by Tassierambler at 21:40 5 comments:

It was pretty obvious that the North East was going to be over-crowded with mountain bikers today, so I asked myself the question ... where could I go riding and have the trails all to myself ... 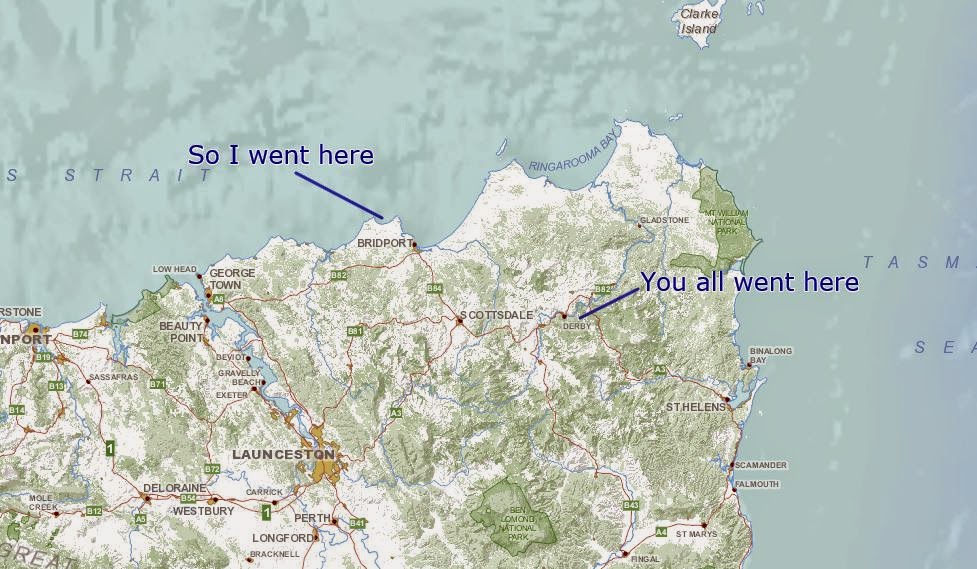 St Albans bay is part of a 4WD route that runs from Bridport through the dunes and along the beaches to Bellingham (you can check out the parks information on the route here).

It is not however a mountain biking route because to get onto St Albans Bay (which is itself soft sand at high tide) you have to first get through either East Sandy Cape or West Sandy Cape ... and that involves a lot of very soft sand and a lot of pushing, let me show you ... 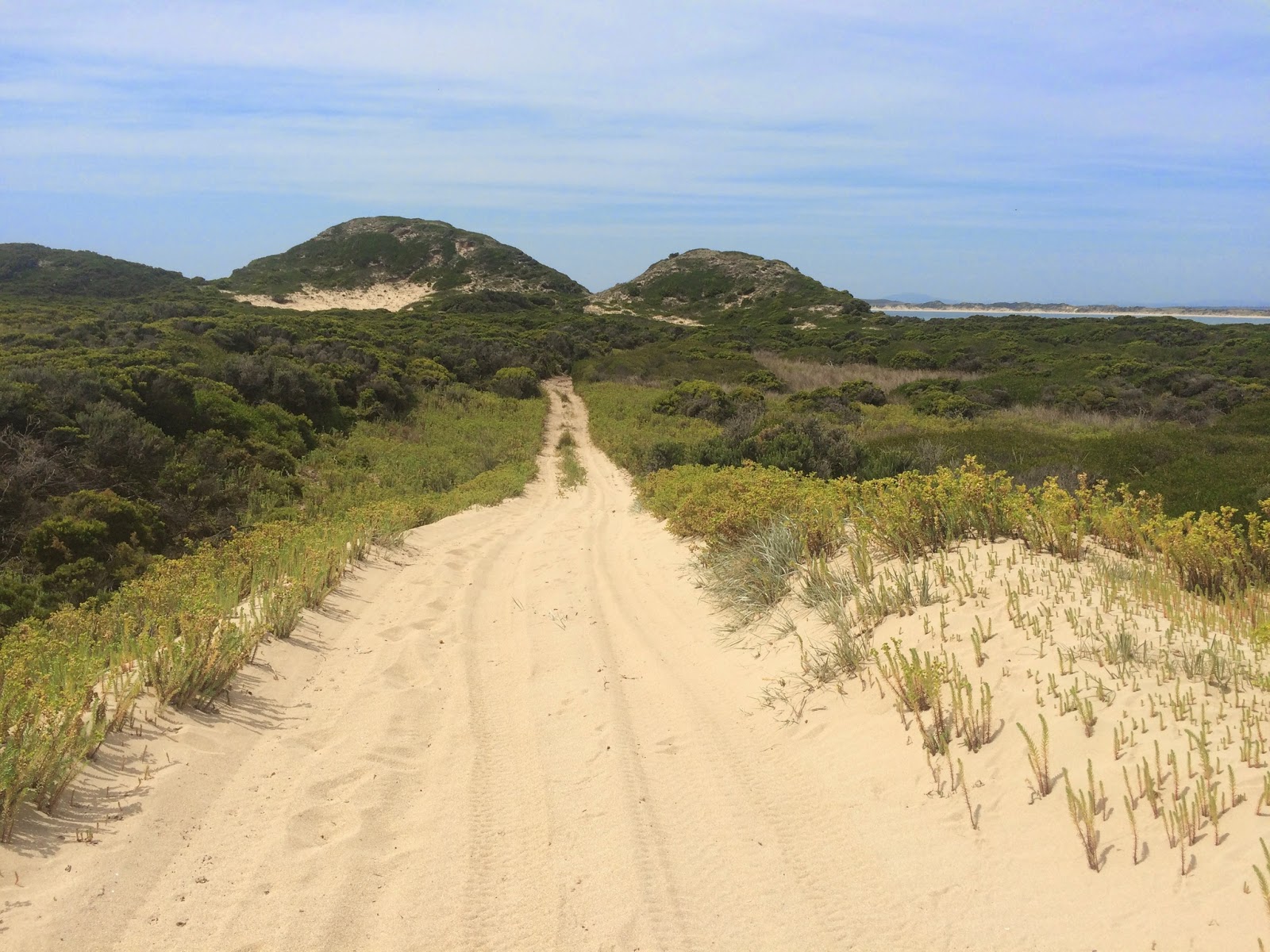 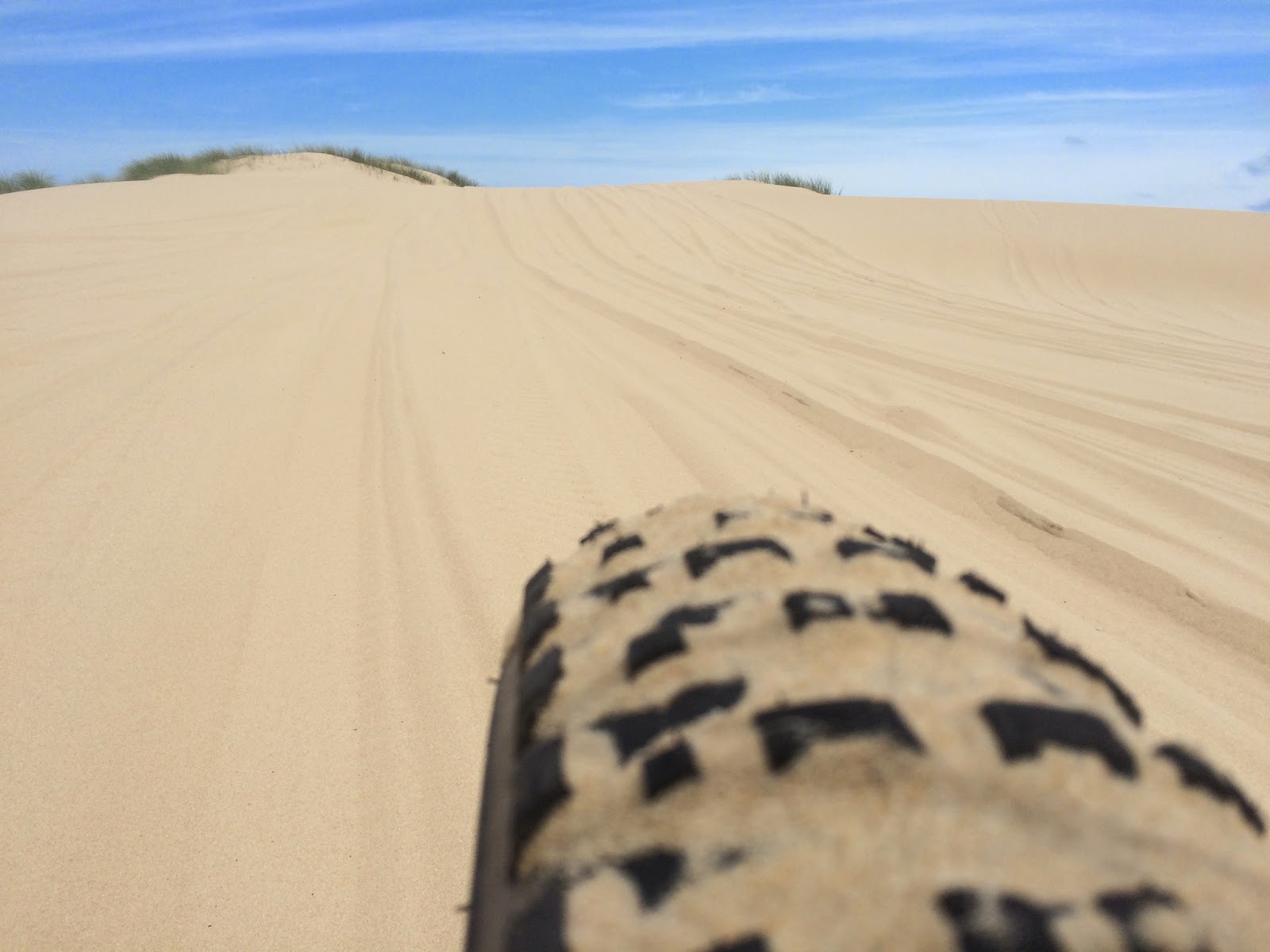 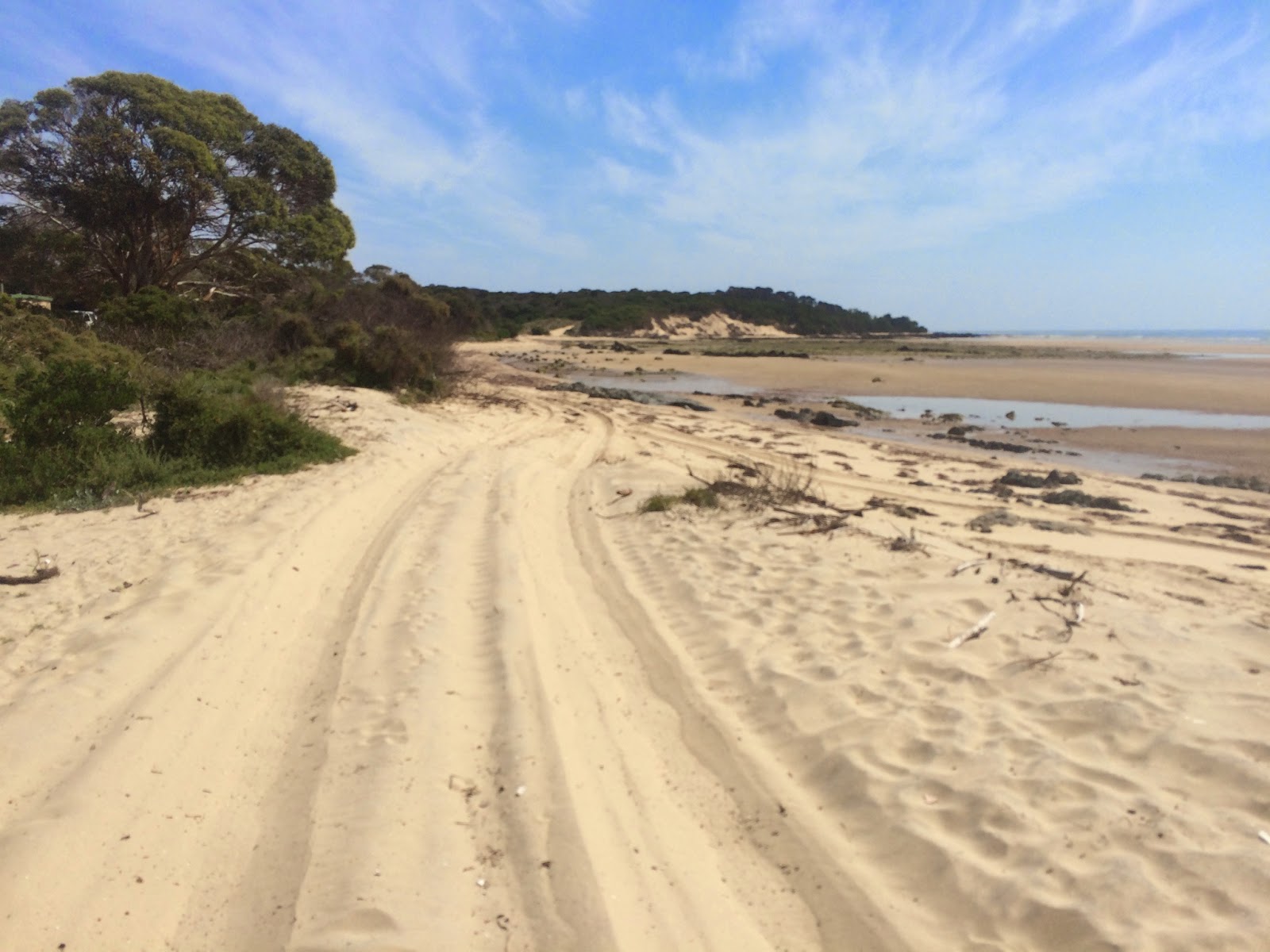 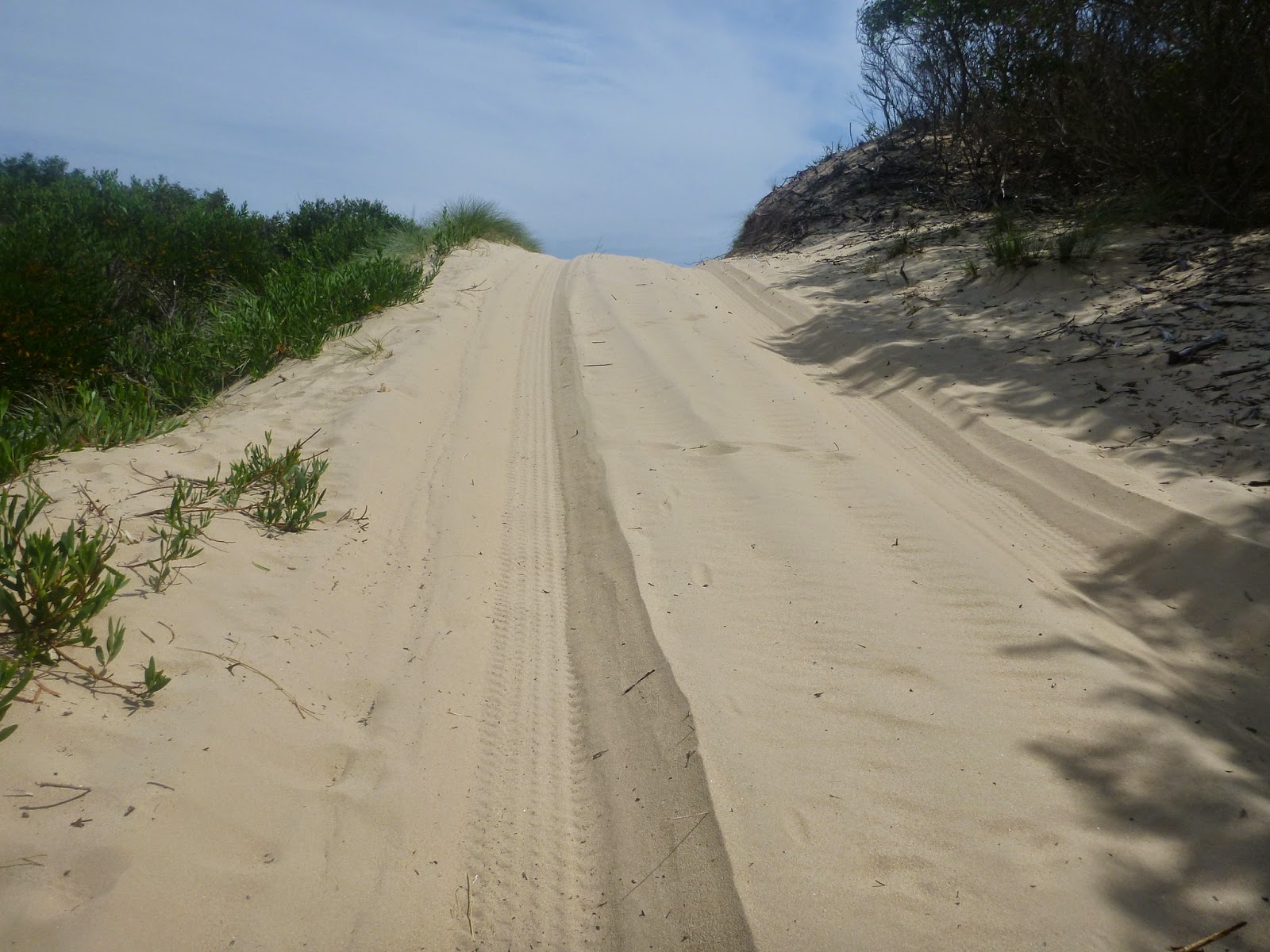 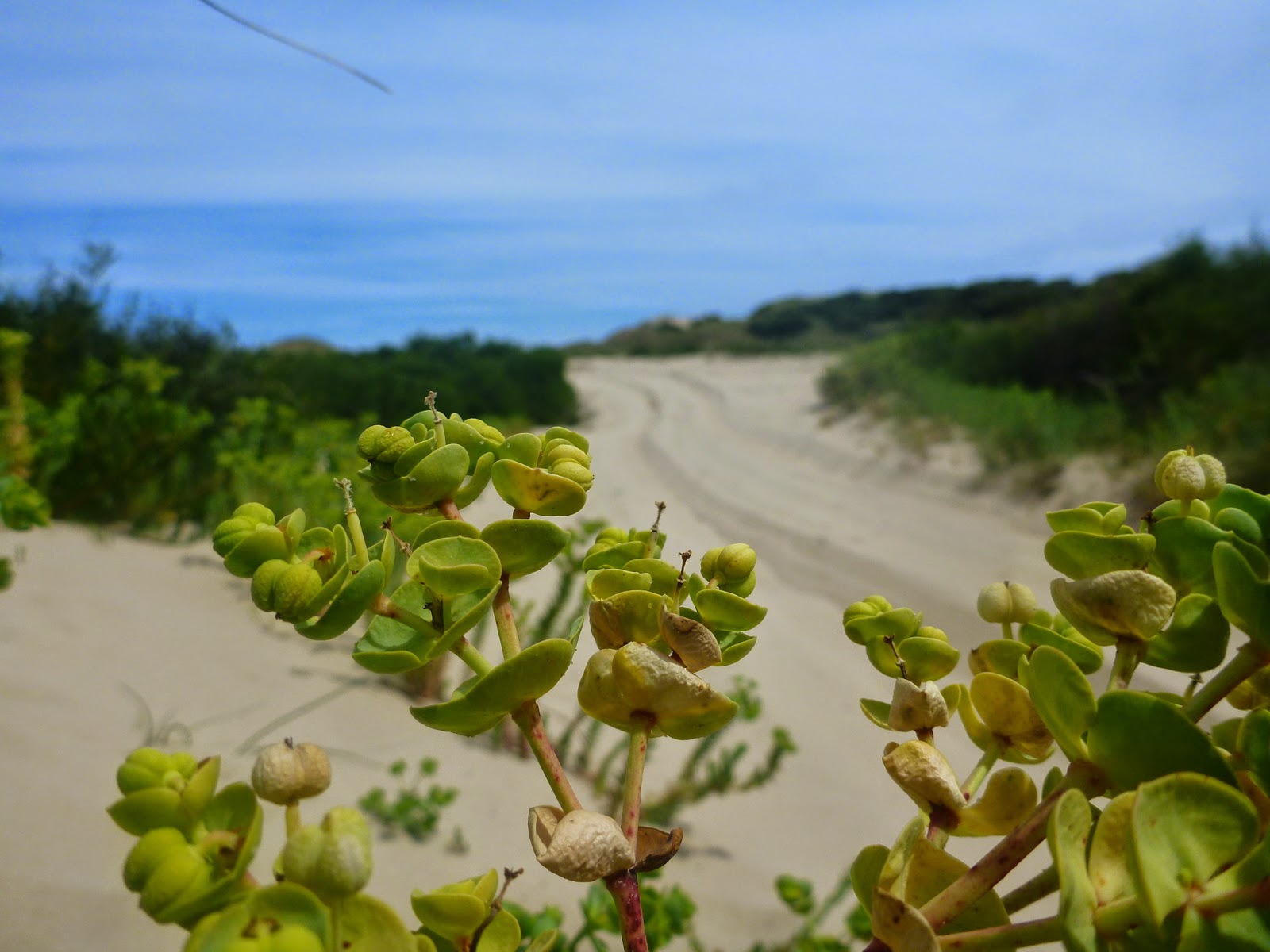 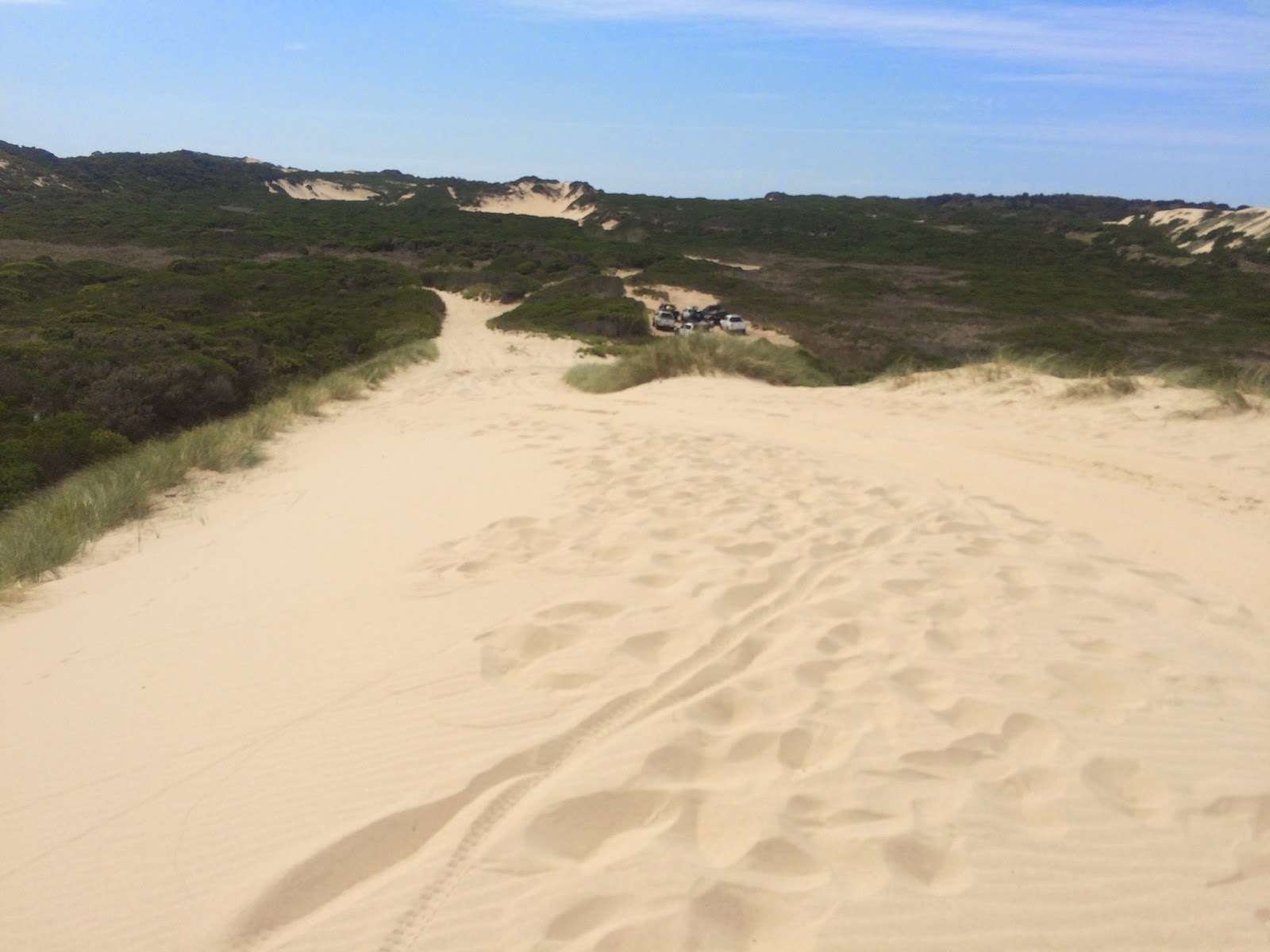 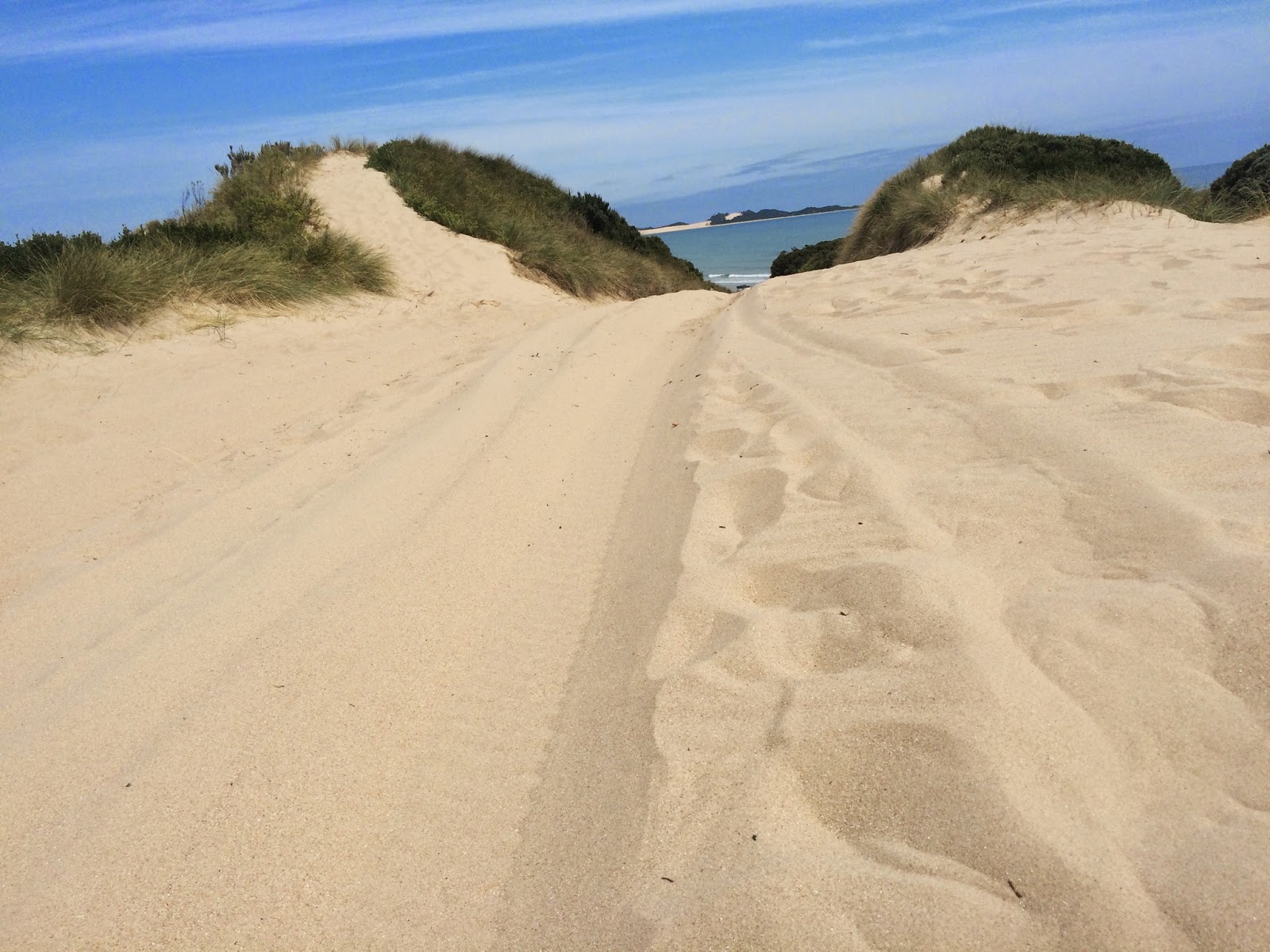 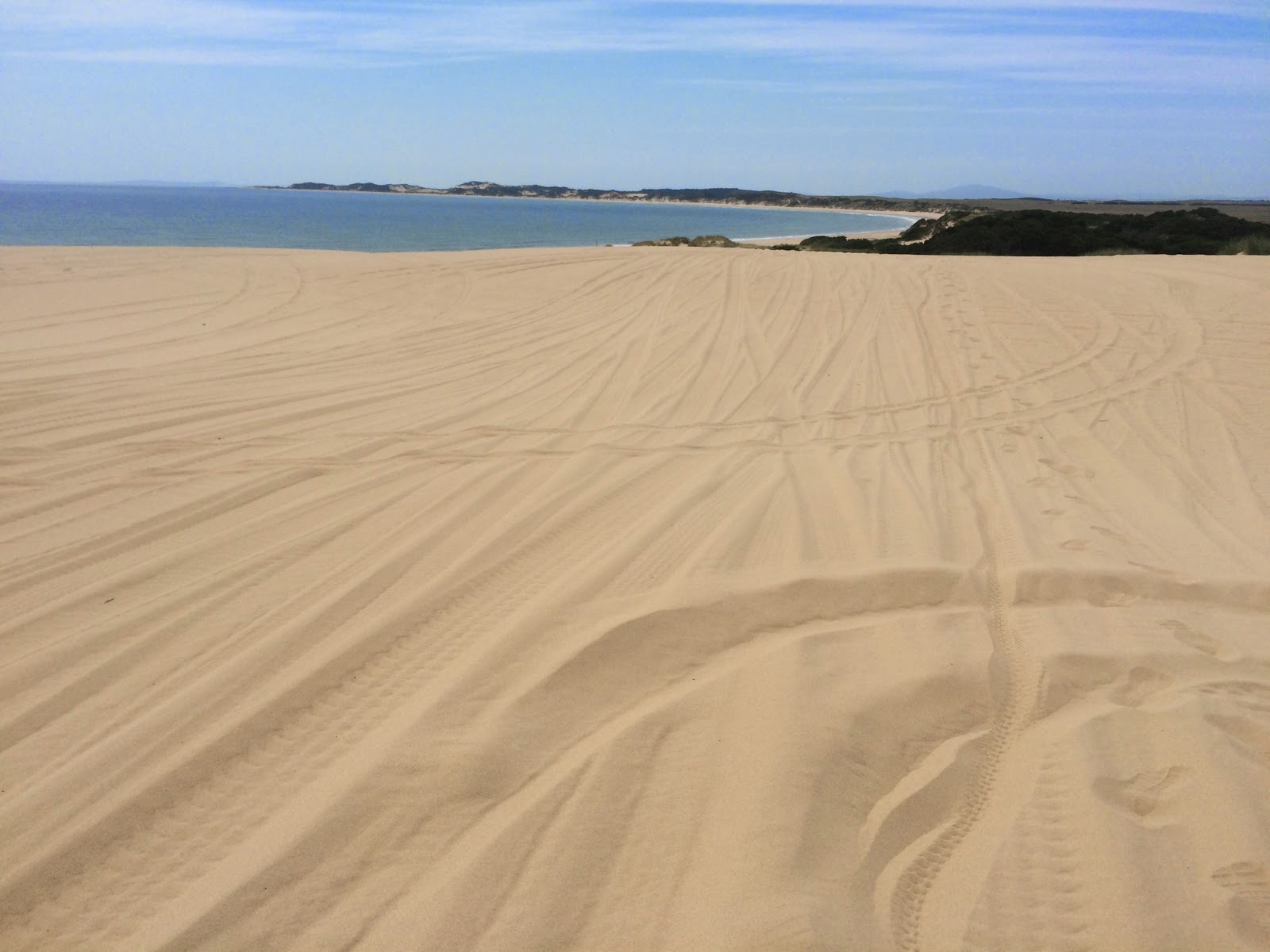 So if you do want to go there, and you want to ride, then you'll need to get one of these ... 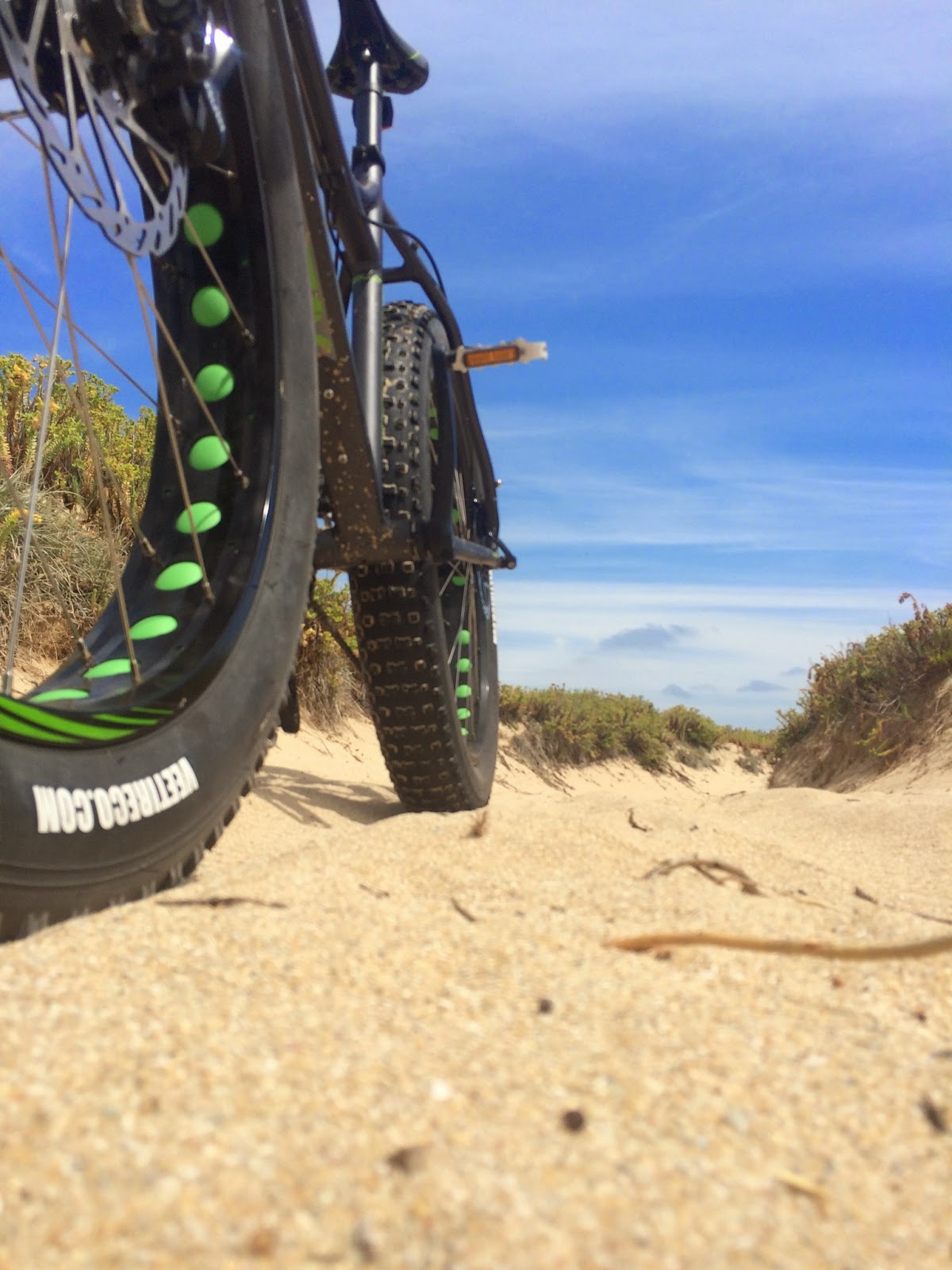 Yes, Santa (I do like that jolly old fellow) bought me yet another present (albeit that he charged it to my credit card)  ...


I'VE FINALLY GOT A FATBIKE!!! 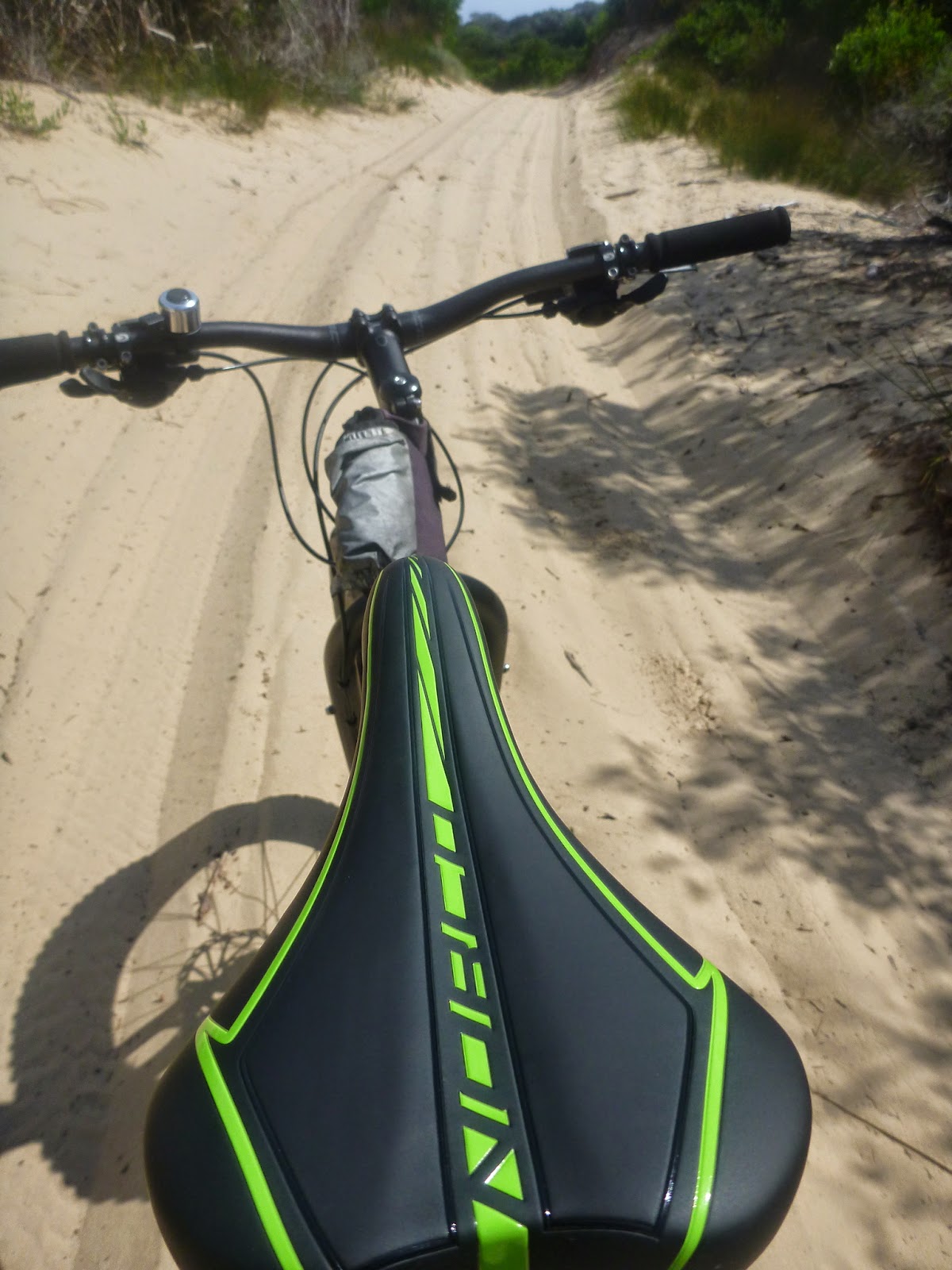 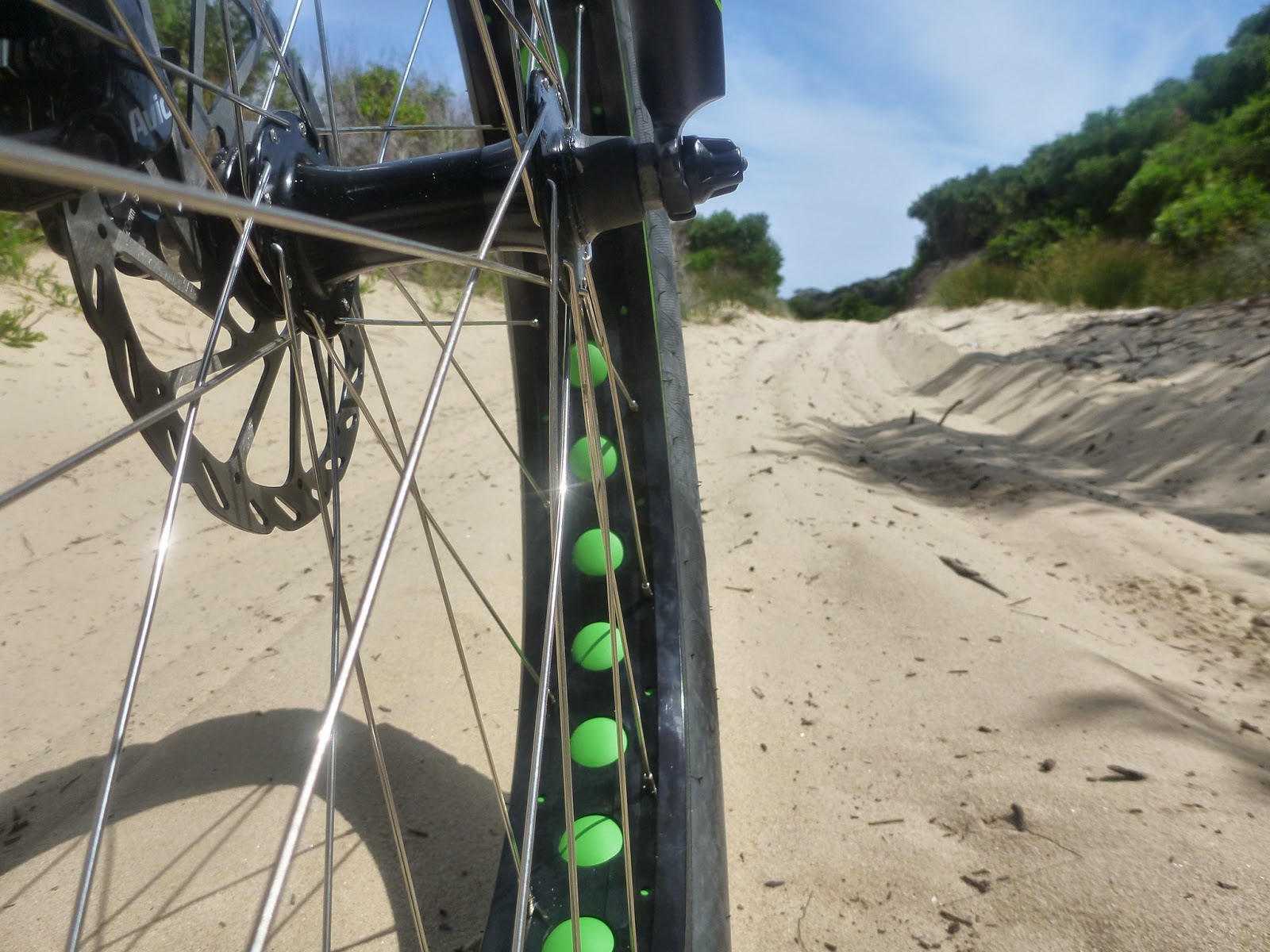 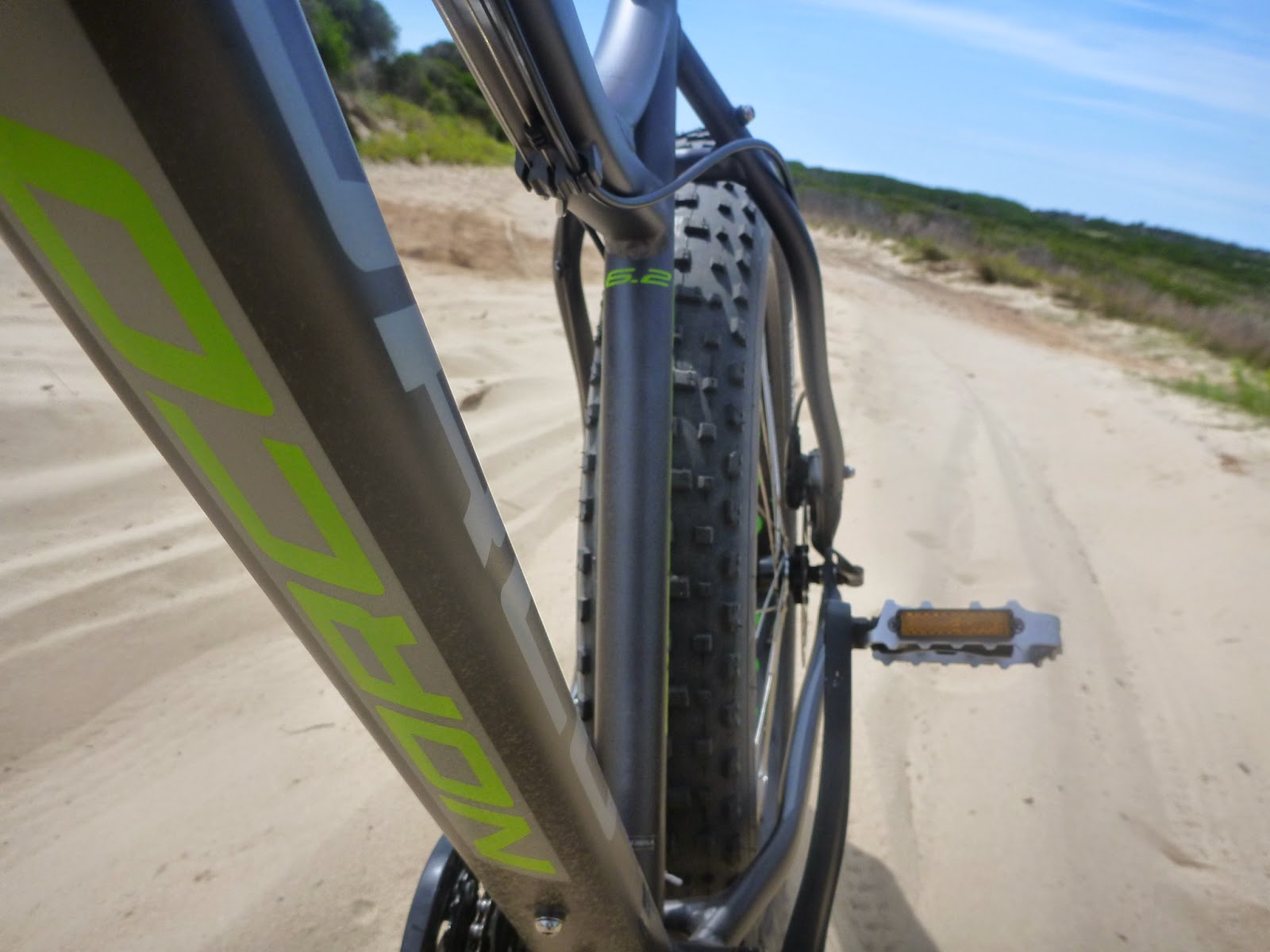 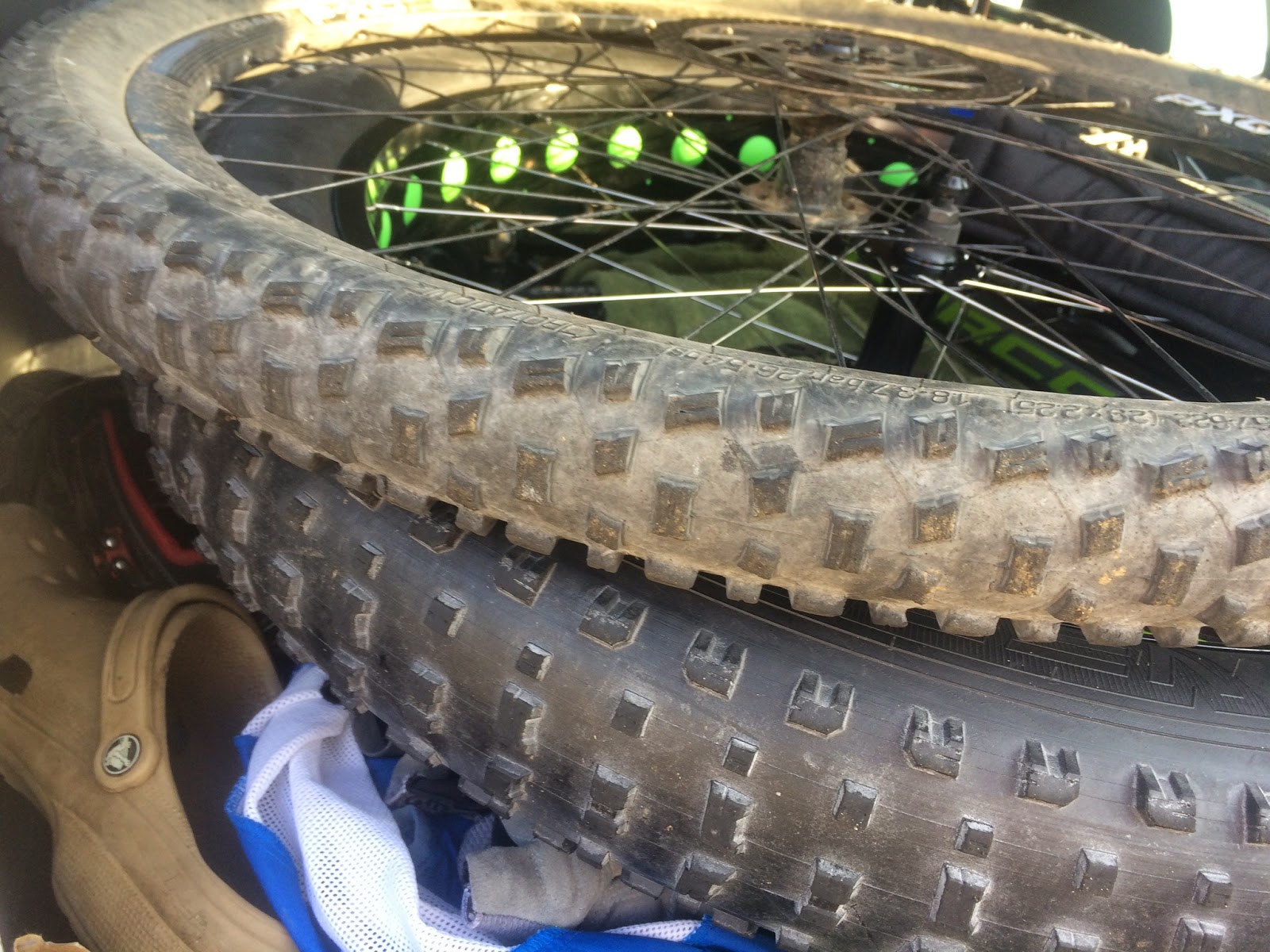 Anyway, I've had this new toy for a few weeks now and I've been chaffing at the bit to actually get out and ride it ... so much so that I took a detour on the way to the Blue Derby Trails to somewhere where I thought it would get a real test.

And that's how I (really) found myself at St Alban's Bay. I learnt so much about fat biking today:

I learnt that even with a fatbike, a fat, unfit guy still can't ride up every dune or along every beach (I know - damn - but don't panic, I've heard that there's an electric fatbike on its way).

On the flipside, I also learnt that you can ride so many more places that a normal bike couldn't even begin to ride.

You can scoot along flat, dry sand ... like it's tarmac (albeit slow, dead tarmac).

You can fly down soft sandy rutted tracks with a huge grin on your dial (without that over the handlebars moment that comes on a normal bike).

I learnt that when the tide is coming in, the sand gets sticky and heavy and is very, very hard to ride through.  Even on a fatbike (damn again).

I learnt that the heavy chain oil that came with the bike is a really bad choice for a fat bike (my chain was so thickly covered in sand by the time I'd covered about 15kms, that it started getting stuck to the front chain ring and I couldn't pedal the bike - did I mention the bad luck I've been having lately?)

I learnt that there's lot of 4WD's on 4WD tracks in Tasmania (I mean a *lot*) and that the drivers and passengers are a pretty good bunch (I'd say great bunch, but not one of them offered me one of those cold drinks I saw them all clutching through the windows as I stood in the thirty plus degree heat). 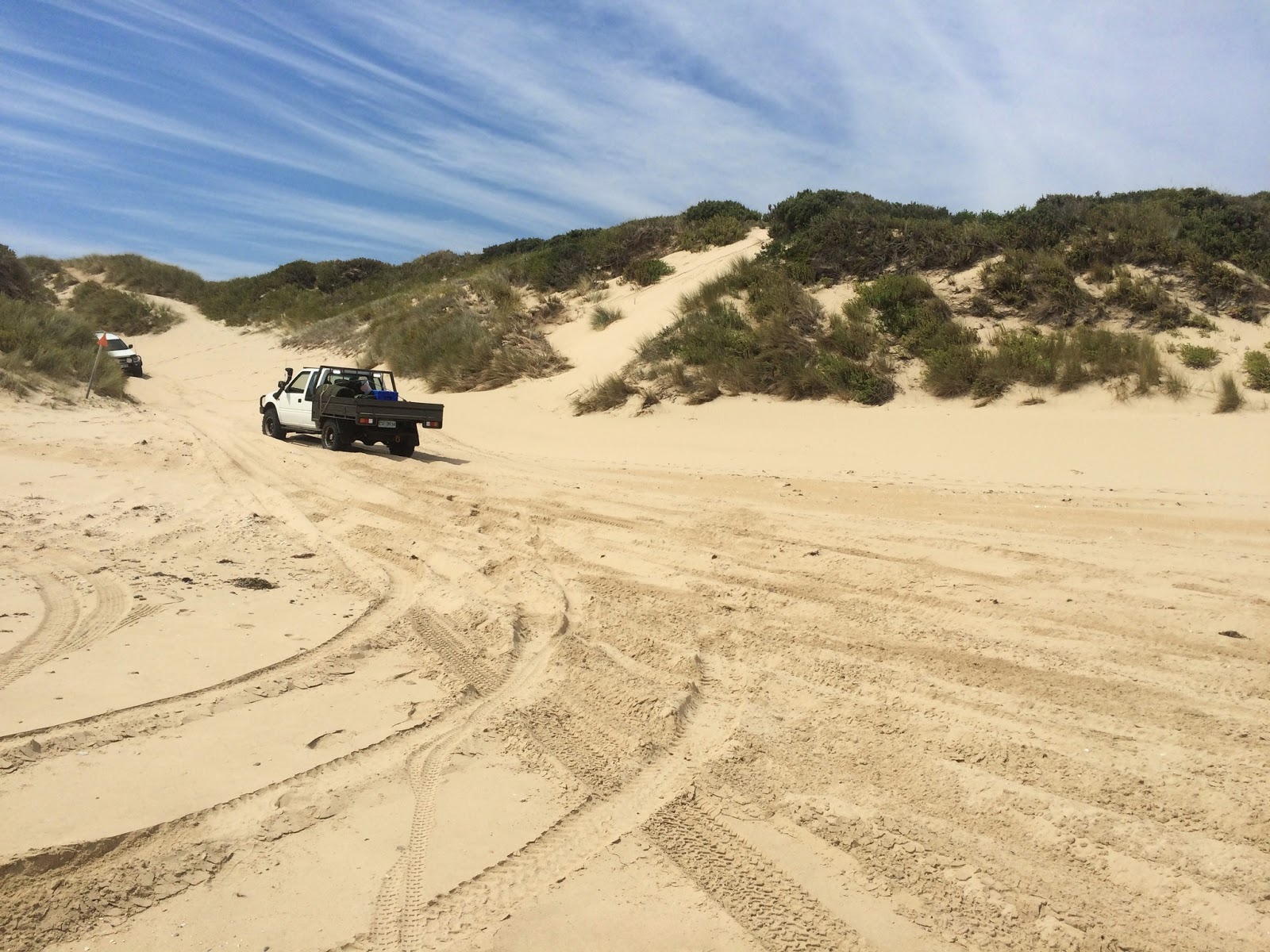 But my most important lesson of the day was a simple one ...

There's lot of flies on Tasmanian beaches (I mean a **lloott**) ... and you can't outrun them on a fatbike (damn, damn, damn and damn).

You have no idea how much I hate flies .... anyone know where I can take my fatbike that doesn't have flies? 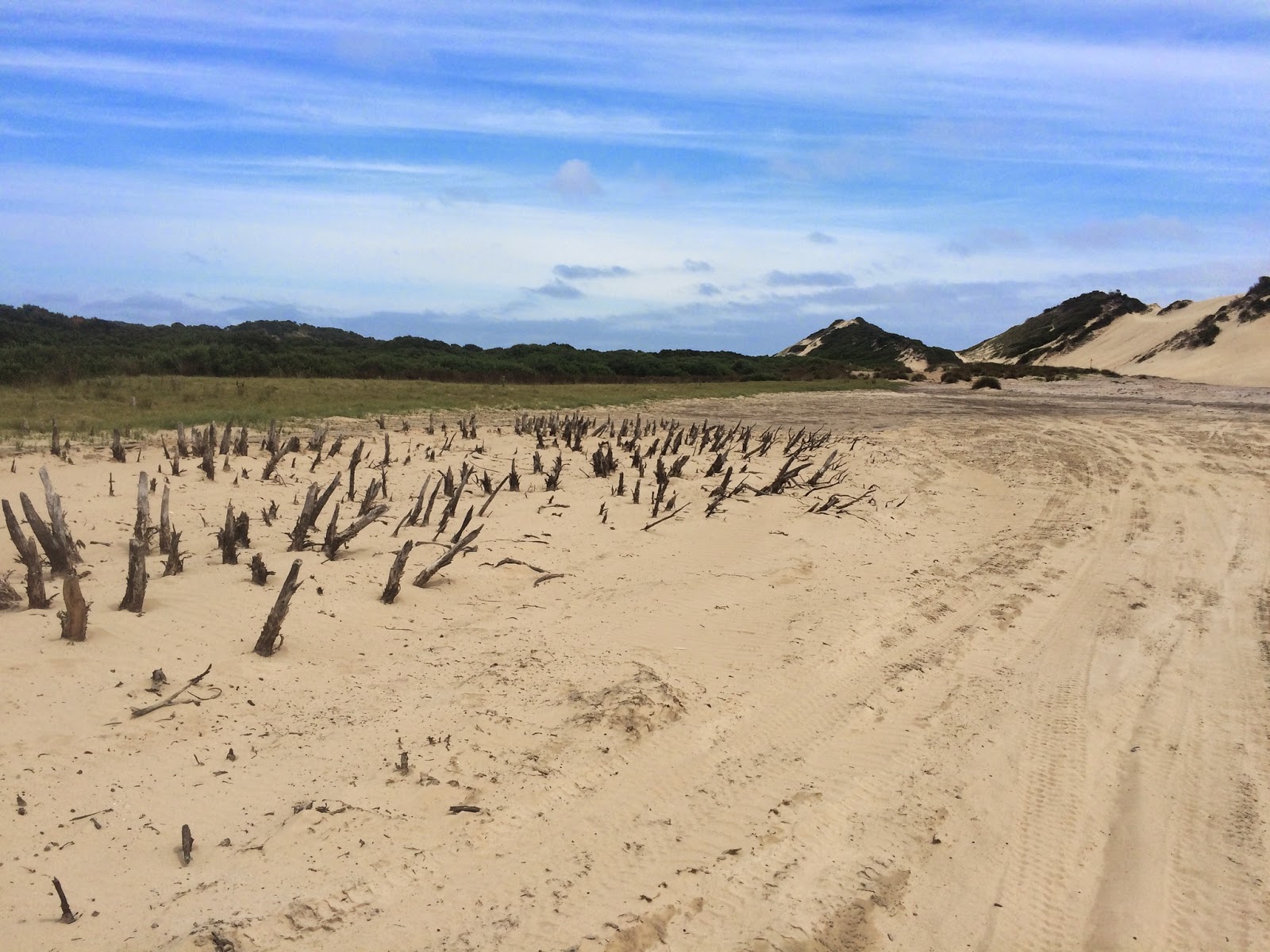 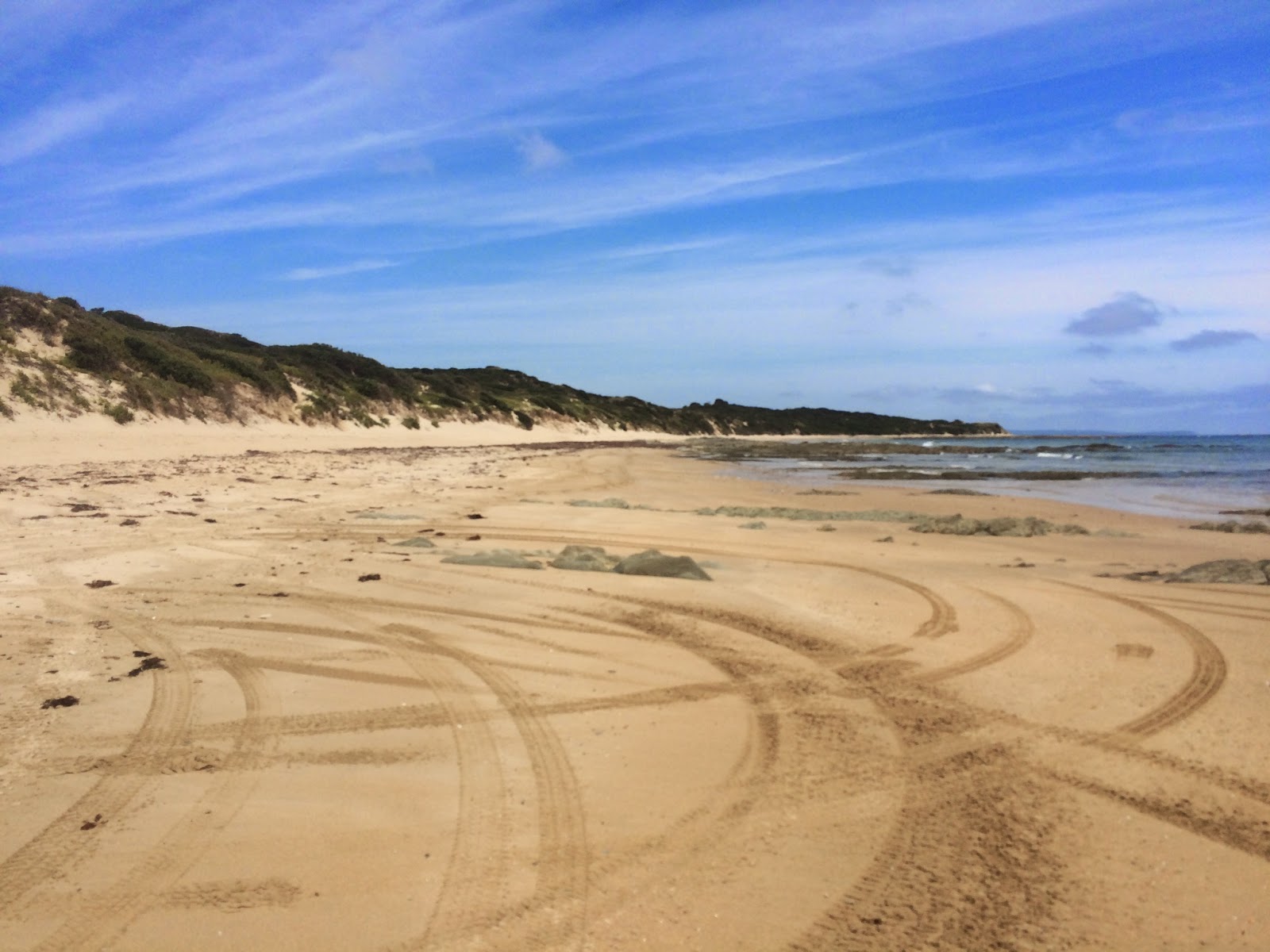 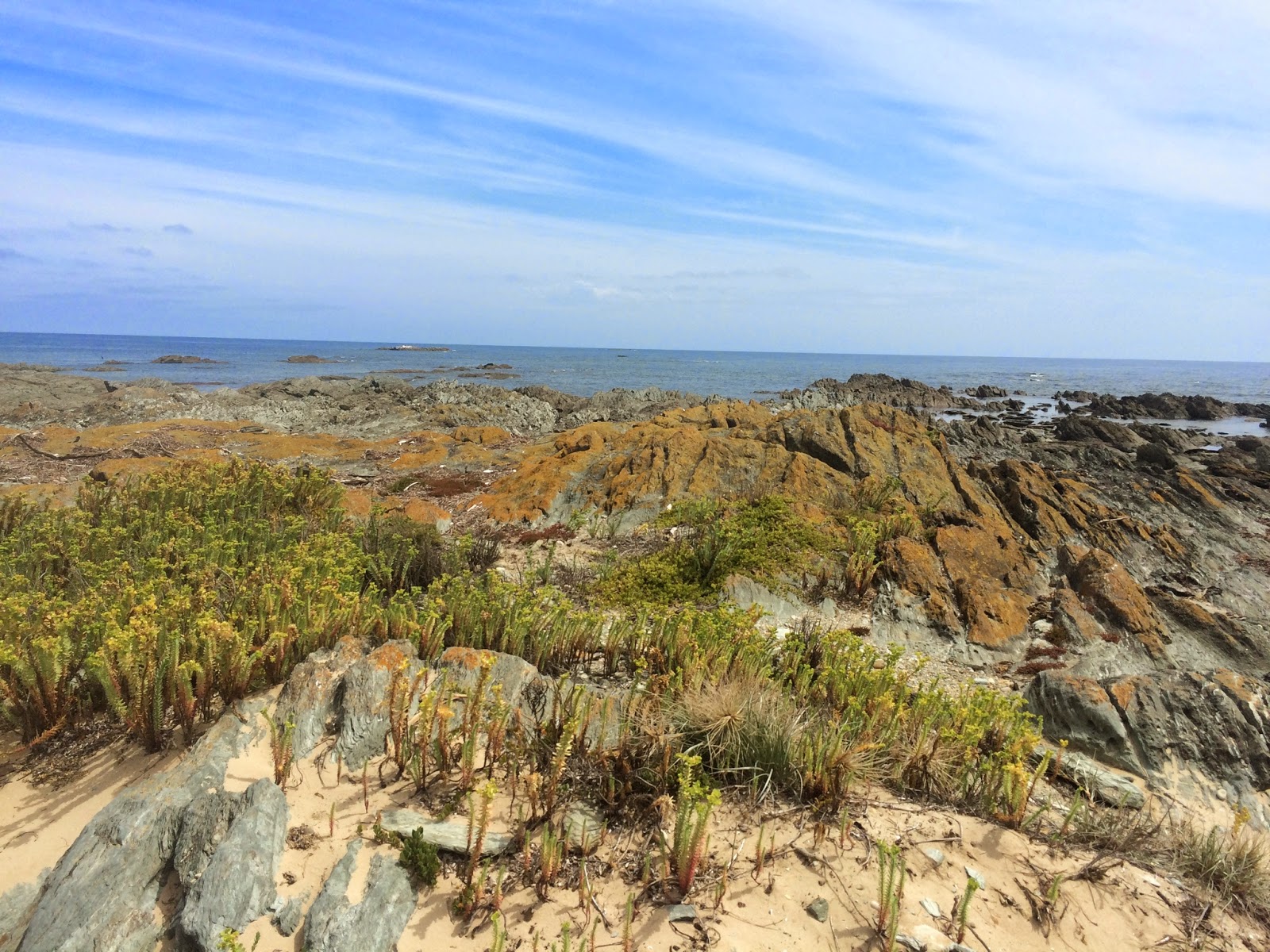