I can't even remember when the Low Rocky Point Track first came onto my radar.

But I do know it was a long time ago

I think it may have been one day when I was either staring at the map on my wall, or playing around on google earth and I suddenly noticed what looked like a road wandering down the map from Birches Inlet, at the bottom of Macquarie Harbour, down to Low Rocky Point ...

I zoomed in and traced the line on Google Earth and found this 72km stretch of road on the absolute edge of nowhere ... 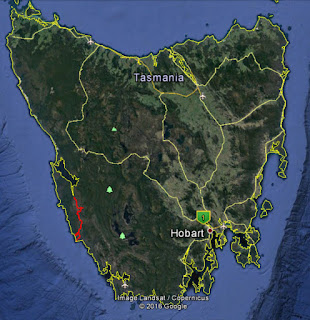 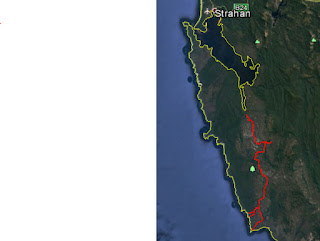 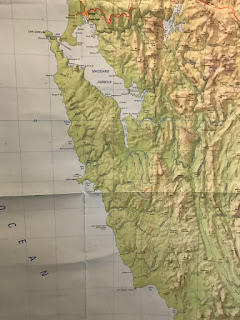 And I just knew I had to ride it.

But it took years of patient waiting and putting out feelers to finally bring it together.

We'd discussed a trip down here during a cold night on the Ride that Never Was back in 2014, but holidays and logistics got in the way and it fell through.

Then Tony Allwright, a work collegue from two decades or more ago, and I stumbled across each other and discovered our mutual interest in heading down this track.

This coincided with an interest from Parks and Wildlife in having a team go down and assess the track condition and check up on the rumours of damage from quad bikes and four wheel drive vehicles.  This interest was a very important piece of the planning puzzle as it meant Parks were prepared to provide the boat transport needed to get us to and from Birch's Inlet, and so last year we planned a trip down the road ...

A trip that was to launch in the first week of February 2016.  But then on 26 January, 2016, the devastating North West bushfires started on the west coast and Tony got sucked into the maelstrom of fire fighting and planning, and so the trip didn't happen ... again.

But, we kept in intermittent contact, we penciled in another window for our trip down the road and we even went for a shakedown ride in November to test out the gear.

Two other riders - Tyrone Blyth and Bob Cripps seemed to lock into the trip.  It was becoming real this year.

I used the trip as an excuse to buy a Surley ECR and spend hundreds of dollars on new lightweight gear - a new MiniMo jetboil stove (loved it), a new neo-therm thermarest (loved it), a new Osprey Escapist 32 backpack (which arrived literally 12 hours before we left) and a set of  Salsa Carry Anything cages and bags (which arrived one day after I left and so are still in pristine condition).

I went and bought Strive (and Woolworths) out of dehydrated food the day before the trip, and then ,after getting home from a long day at work, I spent a stressful night trying to cram camping gear and eight days worth of food into my bikepacking bags and backpack, wondering all the time about what essential item I'd forget ... 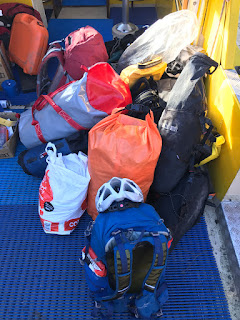 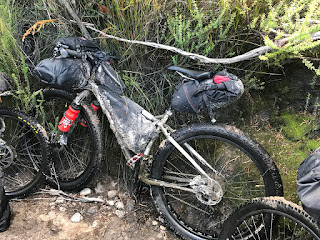 At five am the next morning, after a poor nights sleep, my alarm went off and I was on the road to Strahan (still with many bags filled with "maybe I will, maybe I won't" items of gear thrown into the car just in case).

It was Wednesday 2 February, 2017 ... and after all those years of planning and dreaming, I was finally going to cycle the Low Rocky Point Track.

I was a little bit excited ...

And that's where I'll pick it up in the next post.