I heard Tony unzip his tent and wander down to the Conder (yes, I have received the devastating news that the correct name of the Condor river is actually the Conder river, named to honour Hartwell Conder - the State 'sMining Engineer in 1912).

So sorry Hartwell, and thanks Matt for that correction. 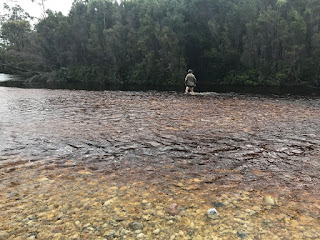 I wanted to summon the energy to climb out of my own sleeping bag and join him for an assessment of the river level, but instead I lay there until I heard him come back up before inquiring "How's it look?"

"It's dropped about a foot, maybe more, overnight", he replied.

"You serious, or kidding?"

I got out of my tent and went and checked, and sure enough the river had dropped over a foot.

We were back in action. 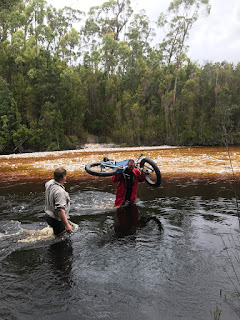 We'd debated what we'd find on the other side of the conder river as we poured over the maps the previous night.  It looked like a couple of steep climbs followed by what then looked like either a slog through a bog or what we the optimists thought might be a track running beside the bog.

There were also lot of contours surrounding the track, lots and lots of contours in fact, but we all somehow assumed that this would just be like yesterday and we'd be following along a couple of escarpments with lots of drop offs around us.

Ah how I chuckle now as I reflect on our ignorant bliss.

We were right about the first bit - the track just goes straight up from the river, and for the first time we found ourselves in enclosed forest.

It was a beautiful area, but lots of small trees had fallen down over the track and much track clearing was in order.

Luckily we had two ex-forestry personnel to clear the track for us ... go Bob and Tony (I mean Tyrone and I would have stepped in and helped - but those guys were machines and we would just have got in the way - isn't that right Tyrone) 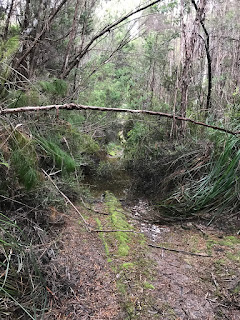 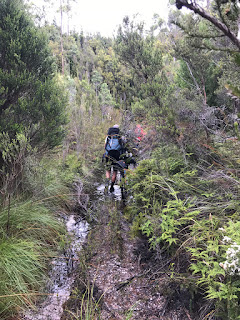 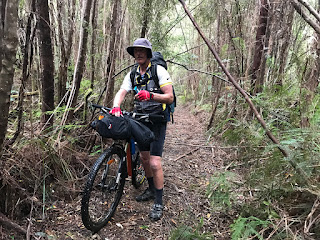 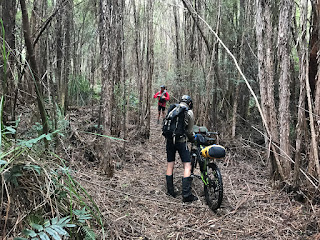 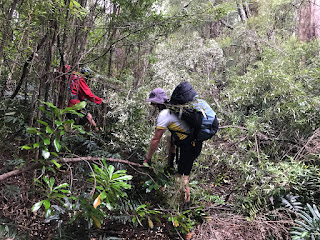 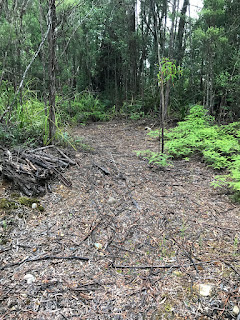 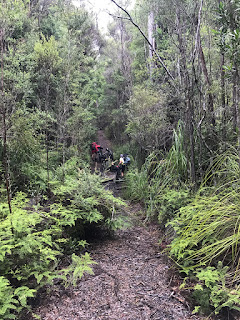 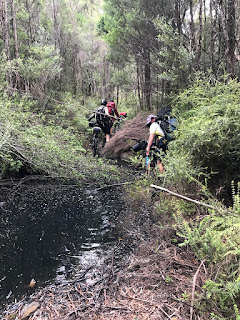 Then, much quicker than I expected, we got to the top of the hill and after some great views and a short bit of riding - we were heading straight back down again.

And I mean straight back down.


Then you'd never guess - once at the bottom - it just went straight back up again.


I'm actually torn over what to say about this section:  In many ways it was just demoralising being able to see this track stretching out in front of us seemingly forever as it went up and over every single hill we could see (turns out those contours we'd seen on the map were real), and yet on the other side of the coin, it was just magical seeing this white track winding through this remote and amazing area and knowing we were probably the only people this summer who had been down this way.

One thing I can say without hesitation is that the going was slow.

Except for Bob - he just flew along, always out front chewing up the miles like they were flat and always with a smile on his face.

Then eventually we got to the top of the last hill and after riding through a bit of a damp section ... 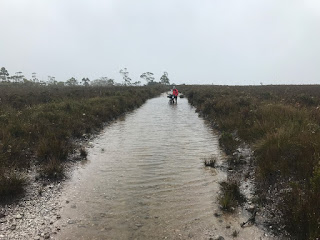 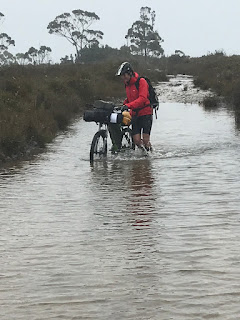 We finally came out onto the old air strip that I'd spent hours staring at on google earth. 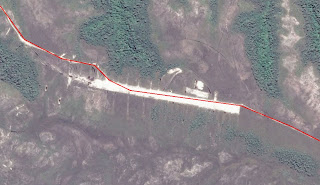 It was surreal to finally ride onto this air strip and think back to this image and know I was actually standing here.

I should say at this point the rain was really coming down, and I'd suggested we pushed onto the airstrip as it looked like there was an old shed there where we might be able to get some shelter from the conditions for a more comfortable lunch.

I couldn't actually take any photos on the way through as my iphone and hands (and everything else) were so wet I couldn't get my phone screen to register my fingers, but this is a photo of the shed from the way back ... 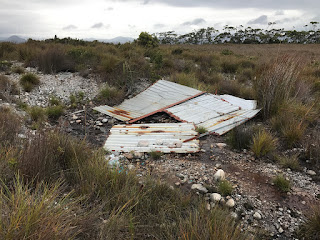 We were only 3 or 4 kilometres from the Wanderer River so we decided to press on and have lunch there instead which would also give us a chance to assess our opportunities of how to get across the river. 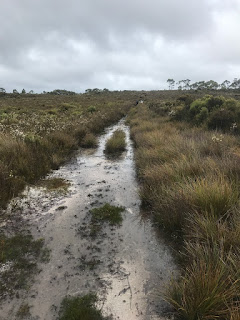 After about a kilometer of good, but scratchy riding, we dropped down a small hill and suddenly found ourselves in a world of deep, and unpredictable, puddles and a very overgrown track.

Tyrone saw a giant blue freshwater crayfish in one of the deeper puddles in the track (I later saw one on the side of the Wanderer River as well and we found the antennae of one at the Conder on our return) but I don't know the actual species we saw as apparently giant freshwater crayfish aren't found where we were.

Then finally, six hours after leaving our camp on the conder and after travelling just 14kms, we dropped out onto the Wanderer River.

And the outlook for getting across wasn't good ... 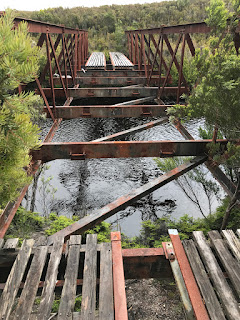 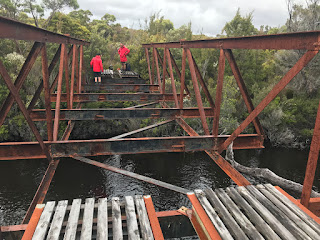 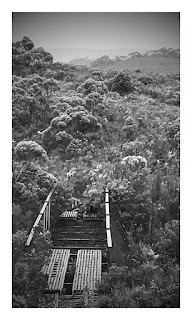 We had lunch on the bridge and discussed our options.

Now you're just going to have to trust me when I say that the mindset you're in when you're sitting at your computer reading this is a world away from your mindset when you're sitting on a bridge wet, cold and muddy (it had been raining a lot today) after spending six hours travelling along at just 2 to 3km/hr.

We knew we were still around 25kms from Low Rocky Point (so 50km return), and that the previous track reports we'd received were that we'd just done the easy bit, and that it gets hard from here.

Our satellite imagery seemed to confirm this with what looked like long strips of water and button grass all down the track - so we had no hopes that our speed would pick up from here.

We knew that best case scenario, we only had one more day to travel south before we'd have to turn around and head north if we were to rendezvous with our lift out from Birches Inlet on the 8th.

We also knew that there were strong (40-50km/hr N / NW winds) forecast for the next two days when we left Strahan, so we were expecting a much harder slog going back into that wind than we had coming south.

We also knew there was no way we could get our bikes across this bridge (we did go across without them).

Finally, we also had a new and worrying fear in our minds that with all the rain we'd been having that maybe the Conder River was rising again behind us and that a foolhardy push to the south could find us stranded and unable to get across the river on our way back.

With that said, there was a school of thought growing that we cpuld leave our bikes here and push down to the coast on foot, but if we did this we all knew we'd be lucky to get there and even if we did, we'd  then have to turn around and head straight back again.

25kms of walking in a day, in these conditions, didn't look promising.

Our goal of spending several days exploring the coast were long gone.

There were also some very tired legs and bodies.  We all had bruises and cuts and leech bites.  The idea of a days rest before scrambling back north again was very attractive.

And so the discussion went around as that big gap in the bridge loomed before us ... what do we do?

Bob, Tyrone and I went across the bridge to test it (we could get across, but that bridge is near the end of days) and we searched for possible campsites on both sides of the river, eventually finding a small sandy spot about 50 metres downstream from the bridge on the northern side where we could just set up our two tents and two bivy's, and so with no inspiration or ideas about how or why to go further, we set up camp. 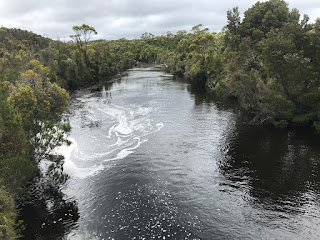 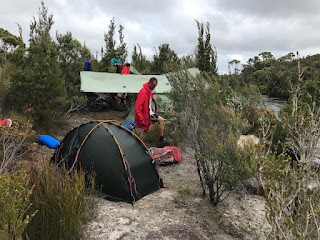 At some point, we did notice that there was a track heading up out of the other side of the river, and Tyrone wandered a little way out into the river proclaiming that maybe we could in fact get across the river.

But none of us really had the motivation at this point to try and get across the river as there really didn't seem any point in doing so, and so instead we each did our own thing (basically snoozing).

Me, I went into my tent with Tyrone's paper maps and my iphone, and I searched for inspiration - some option that had so far alluded us that would get us to Low Rocky Point.

I zoomed in as far as I could on the satellite imagery of the track and studied every puddle and bush for the next 20 kilometres down the track.

I studied Tyrone's paper maps, noting that at least the track looked flat for the next section (the flipside of this, as pointed out by Bob, is that we'd just be pushing ourselves along button grass plains if we did proceed).

I did the math: 12 kms to a junction, 3kms to the Wart Hill Mining camp, 6 kilometres to the coast.   The shortest distance to the coast was 21kms.

It wasn't possible at our reduced pace, it just wasn't, especially as the track looked so slow.

Then it hit me: "I've had an epiphany", I shouted.

"What's that?" a less than excited response came back from one of the guys outside.

It wasn't quite the adulation I was looking for, but I was keen.

After a bit more discussion, it turned out that Bob and Tony weren't so convinced, but Tyrone was in and we had a plan - the two of us were going to go for the coast, with the aim of at least tryng to get down to the mining camp.

At this point it might have been wise to see if we could actually get across the Wanderer River with our bikes, but to be honest I didn't want the cold hard facts of reality to destroy my last hope of at least reaching the coast on this trip, so instead I just ate dinner and mentally assured myself that it would all work out tomorrow.

Or sometimes it didn't - but we'd see tomorrow.