Why do I jinx myself?

The day after my gushing forth of how good my training program was going, I head for a ride along the newly opened North South Trail on Mt Wellington, and end up, well with this: 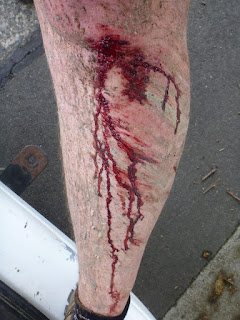 Yea, I crashed ... again.  The super annoying thing is that (a) it was a stupid crash (specifically, just 20 metres from the end of the track, I turned around to tell Kim we had reached the end, and in doing so, my front wheel clipped the side of the track and I went over the handlebars) and (b) it looks like, and should have been, a very minor set of cuts and abrasions, but it wasn't ...

After cycling home, I stepped under the shower to get clean before heading down to Next Level Kayaking's "Come and try it" Ocean ski day, and proceeded to let out a scream that I'm sure was picked up by Seismometers the world over, and heard by the naked ear over 200kms away.  Fortunately it was such a girly scream that no-one will be able to track it directly back to me.

After calming down a bit and giving it as good a clean as possible, I realised that I had scored myself a pretty deep and long cut just below my knee that probably needed stitches.  I've never had stitches, and I decided that was something I'd like to continue to be able to say, so instead of heading off to the doctors, I decided to just try not bending my leg and hoping it would magically stop bleeding.  This is my solution to many things - do nothing and hope that it goes away.  After several hours it was apparent this wasn't going to happen, so I put two plastic strips and an old bandage I found on it, and proceeded to hope that given that I could now not see the bleeding, I had fixed the problem.  Somewhat happily (unless it's got infected under those bandaids) this approach actually seems to have worked.

However, the upshot of this little accident was that I didn't get out in my kayak again until last night (Wednesday).  That's two missed days of training.

Now, to get to something like the point of this ramble, Tasmania's trying to move into summer at the moment, it's just not doing a very good job of it.  I was told that it was snowing on top of Mt Wellington on Tuesday and I've half regretted my decision to wear my summer cycling gear to work yesterday and today as I've felt the wind-chill something wicked descending Mt Nelson in the morning.

However, last night when I jumped on my ski, and after I'd gotten over the initial shock of the water and being wet, it turned out to be a lovely night for a paddle with the water so bath-like that I actually jumped in the water to show how to do a self rescue on a ski at the turn around point of our paddle down at Taroona.

It was a good paddle too.  As I had my ski, and three other (male) club members had racing kayaks, the paddle for the four of us evolved into one of those races that no one officially recognises as a race, just in case they don't come first.  As it turned out, with a strong headwind and with my technological advantage it came down to a race (and I can say that now) between myself and Terry in his Mirage 520, but I managed to reach the turn around point two or three boat lengths in front of him and claim the honours.  Just goes to prove my theory that technology can trump skill and training, and supports the many hours I spend on eBay buying new toys rather than out training.

The paddle back wasn't even a race: with near perfect following waves and wind, I started back after many of the other paddlers (there were probably 15 or 20 of us in all) and just had an absolute hoot flying back between them and then quickly outdistancing even the paddlers with sails.  It was a bit rude of me taking my ski to the Wednesday Night Paddle, and I won't do it again, but it was fun at the same time and hopefully showed some of the club members that ocean ski paddling isn't just about going fast ... it's about going fast easily and effortlessly whilst playing on the waves. :)

As for the North South Track ride, well that was pretty cool as well, especially the new section which is the only really fast, free flowing section of the trail.  Some pics are below, and I've modified the GPS route and track notes on tassietrails.org to cover the newly opened section.