I coerced Kim up to St Mary's on Sunday morning with the promise of the best pancakes in Tasmania from the 'famous' Mount Elephant Pankcakes.  It wasn't a hard sell.

Unfortunately, despite my promises, the pancakes were as bad this time around as they were when I last came here several years ago and the coffee was simply terrible.  I was however surprisingly ambivalent about forking out $80 for a terrible breakfast because this wasn't the reason I really came here ... it was the price I'd chosen to pay so I could ride the Irishtown-David Gully-Four Mille Creek mountain bike trail I'd found on Pedalbite.com recently.

After breakfast we drove into St Mary's and I went and checked out another route in the area (Back Track), although something told me that the Monsters were getting bored in the back and it was time to get to the trails ...


From St Mary's we turned down Irishtown road, and followed this for about 5.5kms until we arrived at an obvious fork in the road with a "Blue Gum Lodge" sign on the right ... this was where I got on the bike (missing what looked like quite a climb up in the car along the road). 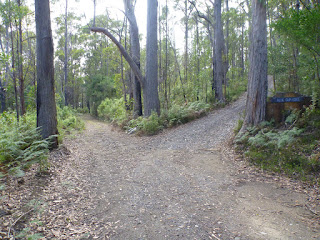 With predictions that I'd probably beat them down to Four Mile Creek we parted ways and I headed down the trail (left fork).  From the first pedal stroke I was pretty much heading downhill and other than stopping about 600 metres from the junction to get around an old gate (there were no no trespassing signs) I continued down a steepening but fairly open trail with a few little obstacles to keep you alert. 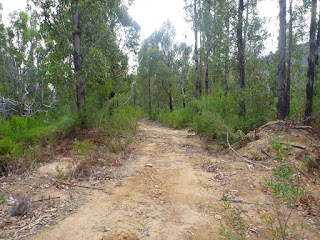 There were a couple of small tracks branching off to the right, but I found it pretty easy to guess the main trail until just over 1.7km from the start when the 'well graded' track did a sharp turn to the left with what looked to be a lot older and less maintained track continuing straight ahead.  I checked my GPS route (thanking my stars that for once I'd GPS'd the route) and it told me to go straight ahead ... so I followed the track down another two hundred metres until I came to this:

The track just seemed to peter out and end.  I pushed on a bit further and it was like this: 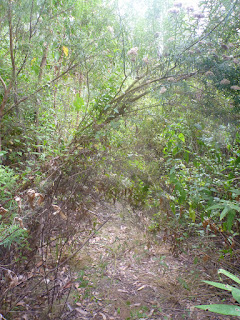 I figured at this point, that the new graded track must be a new route around what appeared to be an abandoned and deteriorating trail, so I made the decision to back track up the hill and follow the other fork.  After a brief push back up to the junction I took off down the other track thinking "Yep, this is it" ... well I did for all of about one minute until this track also abruptly stopped where it looked like the dozer driver had just thought "stuff this" and turned around and gone home.  Looked like it was back to Plan A - the overgrown track.

It was only just over a kilometre from the junction out onto the open road, and to be honest it only took me about 15 minutes to get through, but to put that into a context it was all downhill and should have taken me closer to 2 minutes, not 15.  It's hard to describe the track, it was overgrown but ridable ... well sometimes, oh heck ... hang on let me do some editing ... OK - here's a bit of a video edit of the last kilometre of the track ...

Once down onto David Gully road it was a pretty quick 2.8kms out along a gravel road onto the highway, and then another 600 metres down to Four Mile Creek where I met Kim and the kids.

All up from where I started down to Four Mile Creek it was about 6.2kms (ignoring my wrong detour) and if the track had been cleared it would have been a quick fast ride (the sort of downhill you could do if heading to St Helens with an understanding friend/partner willing to drop you off and pick you up), but to be honest its not worth it at the moment, which leaves me with the scary thought that maybe the pancake parlour was the highlight of this particular soujourn ... 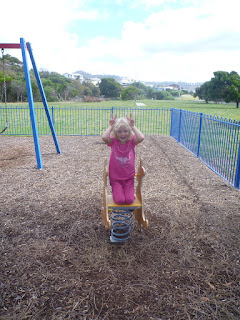 No, saved by the Monsters ... apparently the highlight was the playground at Four Mile Creek.

It was time to head back to Bicheno to feed chips to the seagulls ...