Bicycle touring is a wonderful way of seeing a place ... 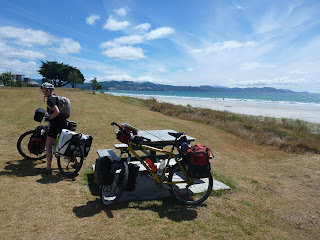 It gives you the time to enjoy where you are and to see things most others miss.  You get to know every hill (the ups and downs) and feel the wind in your face or behind your back.  It is a way to experience everything around you as you are fully committed to the elements.  It is graceful and slow, but exciting and adventurous as you never know what is around the next bend or when you will get to the top of that hill.
Yep, 95% of the time I love bicycle touring, though admittedly sometimes only in retrospect, not in the actual moment of cycling.

The five percent that I hate is usually very heavily correlated to when the bikes go into their bags and they have to be hauled around on buses and planes... 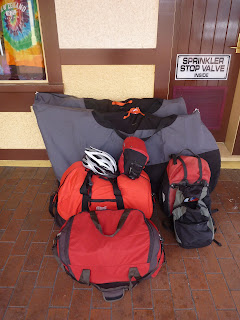 Bikes don't travel well when they're not on their own two wheels, and after our trip over here Kim threatened on several occasions to just break down into a girly crying fit if it meant I'd carry her bike for her on the way back.

That said, today we managed to drop off the rental car, catch a bus back to the YHA to get our bikes (noting that I just walked in the front door with a helmet in my hands and said "May I have the key to the bike room please" and they handed it over), ride out to our hotel and get our luggage, ride back into town, break down the bikes and gear into their bags, load them onto a bus to Auckland, load them on a second local bus to the airport, get off at the airport and get onto a courtesy van to our hotel ... and it all went without a hitch.

In fact in the whole two weeks we've been here, we've only been charged once for carrying our bikes on public transport (and it was only $9 for the two bikes, and in fairness the driver did go out of her way to help us get the gear on and off the bus).  Even Jetstar gave us some leeway on our baggage (we were about 5kgs over our combined 60kg luggage limit and they didn't bat an eyelid once in any of the four times we checked onto a flight).

That's pretty incredible.  Usually you have to go through at least one big argument about excess costs when travelling with a bike.

For anyone who is interested, both Kim and I used a Ground Effect Body Bag for carrying our bikes.  Kim's bike fits into one of these without even having to remove the handlebars - just the pedals and front wheel.

Whilst there is a lot to be said for the good old bike box for protecting your bike on a plane, and I just have to sit and drool at some of the more beautiful bike bags that others get to use, the reality for me is that Ground Effect's Body Bag is an ideal touring bag as it is extremely light (1.3kgs) meaning it doesn't impinge on my airline weight allowance, and it can be folded down into a small bag which fits into the bottom of one of my panniers and hence carried with me so that when I get to the end of my trip I don't have to go searching for a new bike box ... something I once wasted two days in South Africa doing.

This time we also both carried an extra foldable duffle bag with us to carry our gear around when not on our bikes.  Kim had a big red Denali bag from Anaconda which she easily managed to throw all of her panniers into, and I had a smaller Kathmandu bag, but I had to take my gear out of my pannier bags to get it to fit.

We also would carry our handlebar bags and one rear Ortlieb Pannier onto the plane as our carry on luggage (I used a Ortlieb Backpack Carry System for my rear pannier which I picked up cheaply at a throw out sale many years ago and Kim just used the shoulder strap to carry hers).

I also took a Kathmandu Foldable backpack with me on this trip which weighed and packed down to next to nothing and was very useful when off the bike to just throw my expensive gear and carry it around with me.
Posted by Tassierambler at 09:05