I really need to get quicker at my starts. 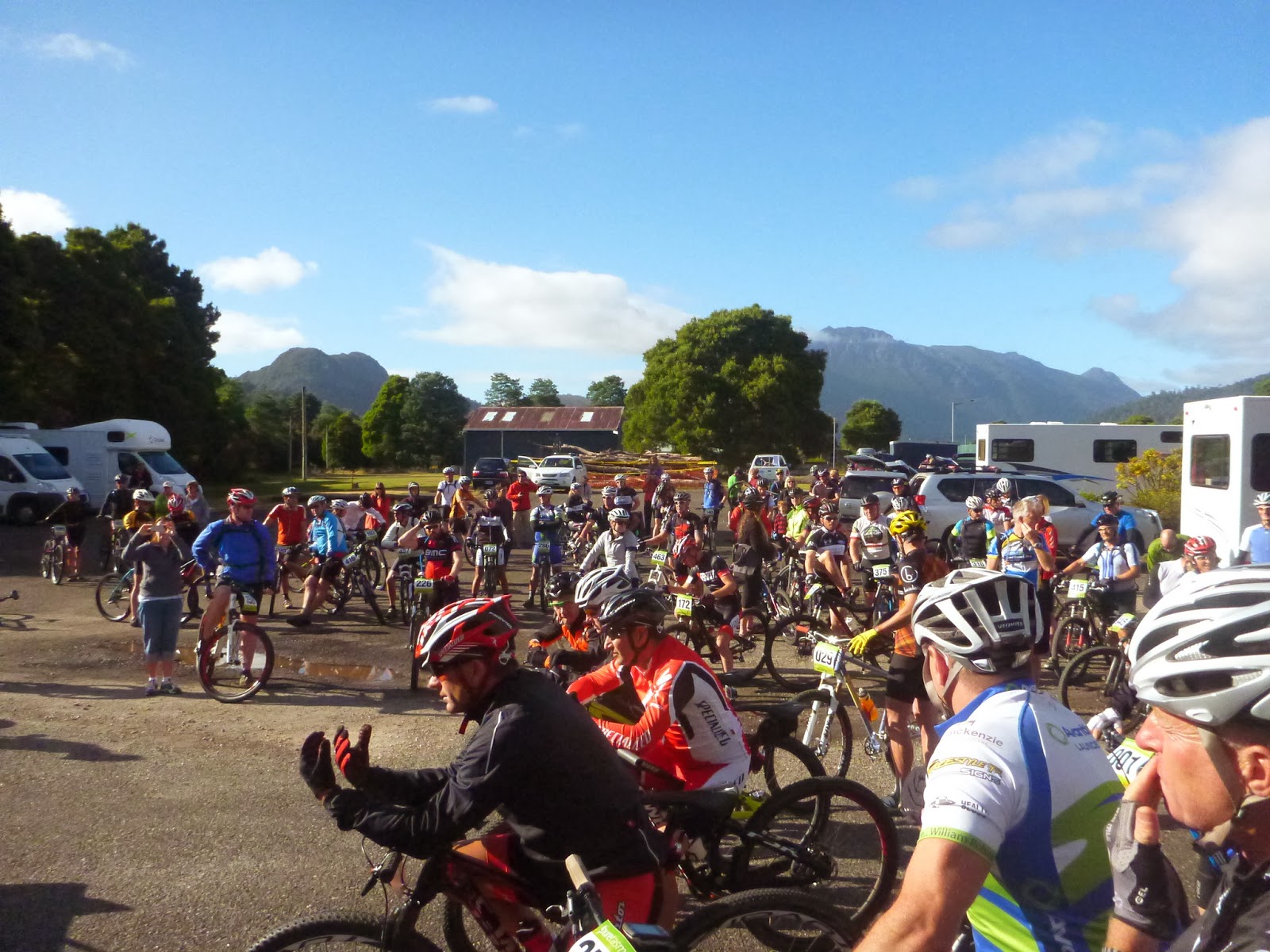 After an easy 4-5km cruise out from Tullah this morning, "J" group (which I was in) had around a 40 minute wait before our start so we just sort of sat around chatting and shuffling a little closer to the start line every four minutes as another group went off. 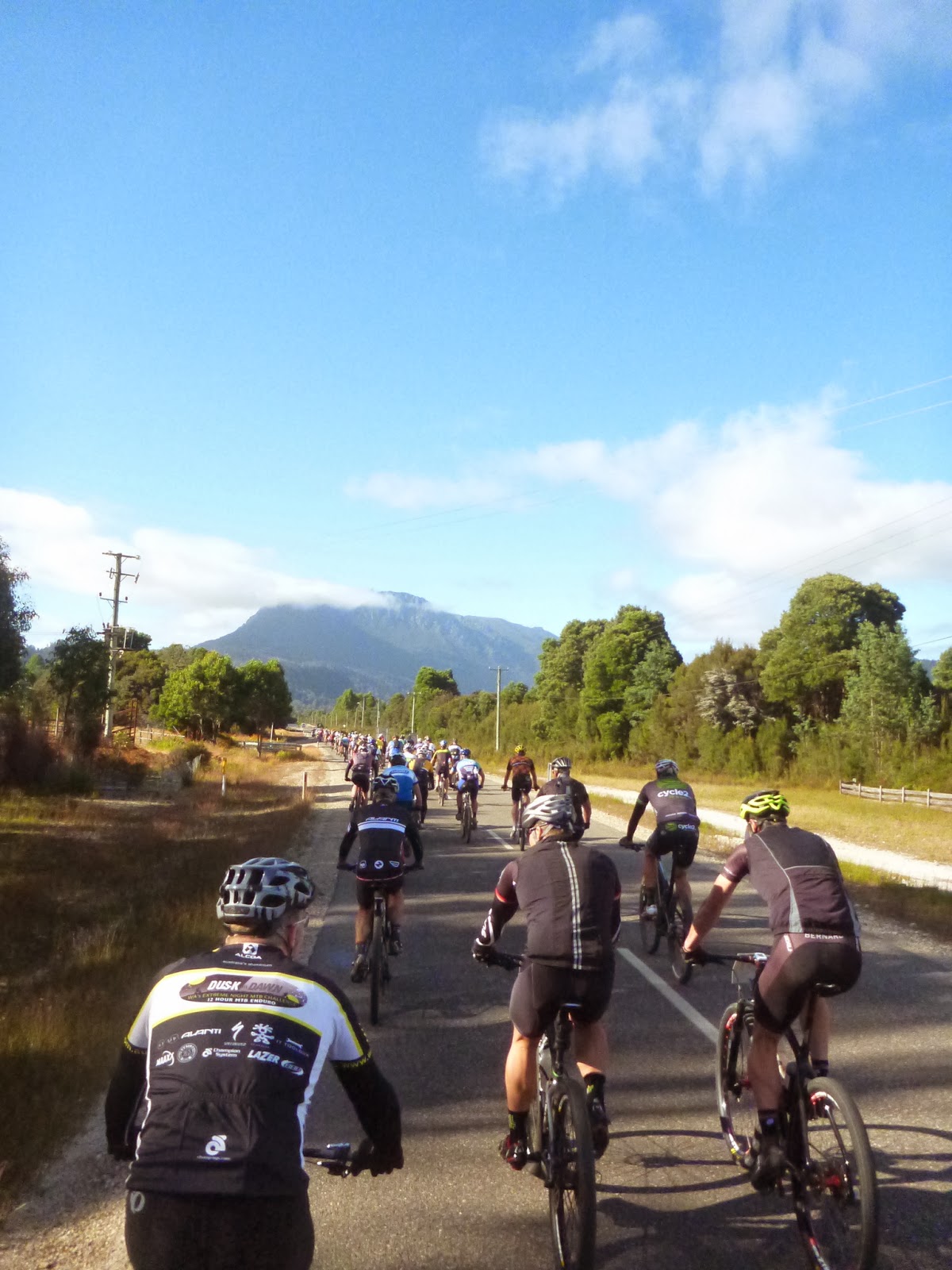 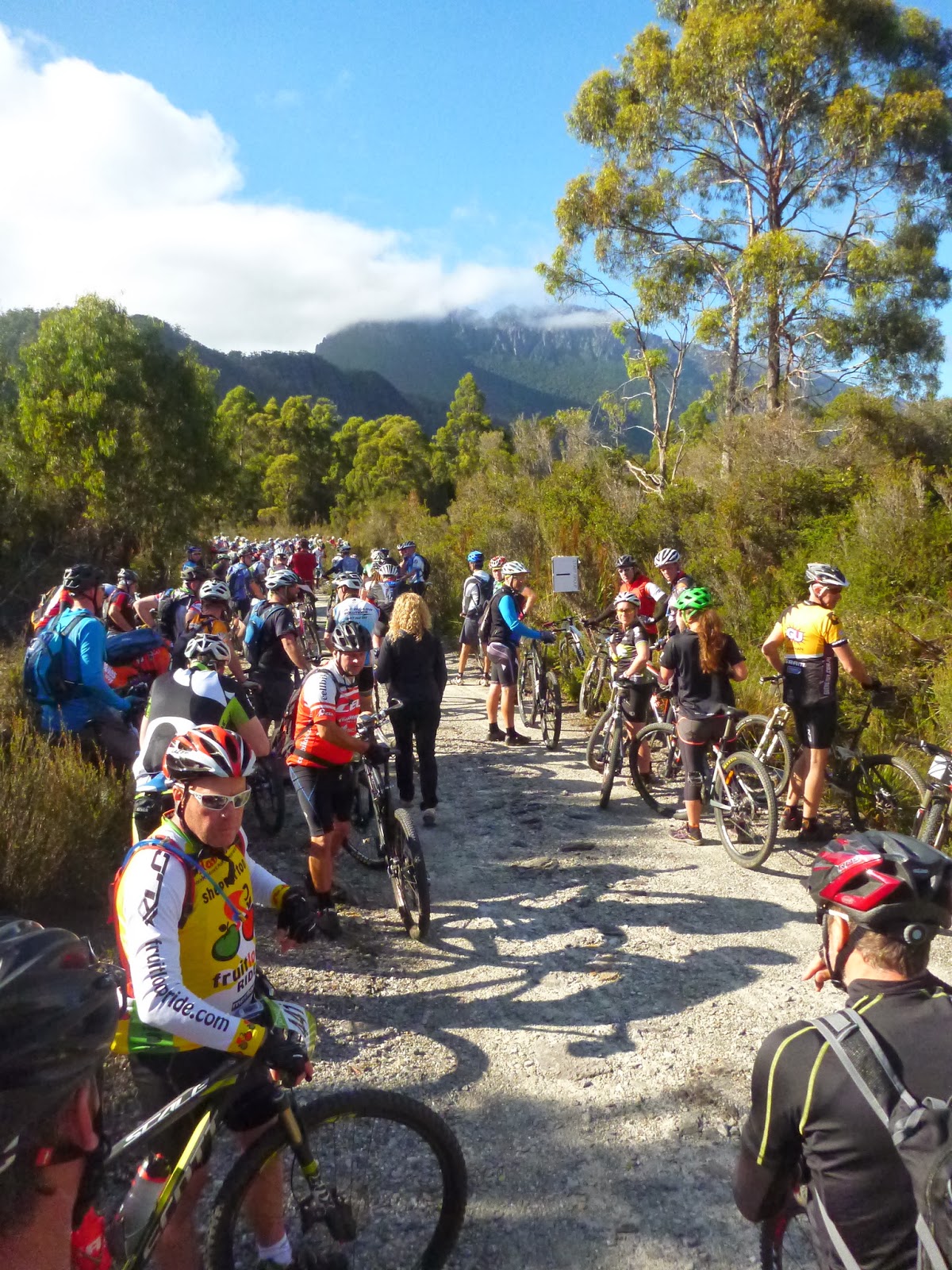 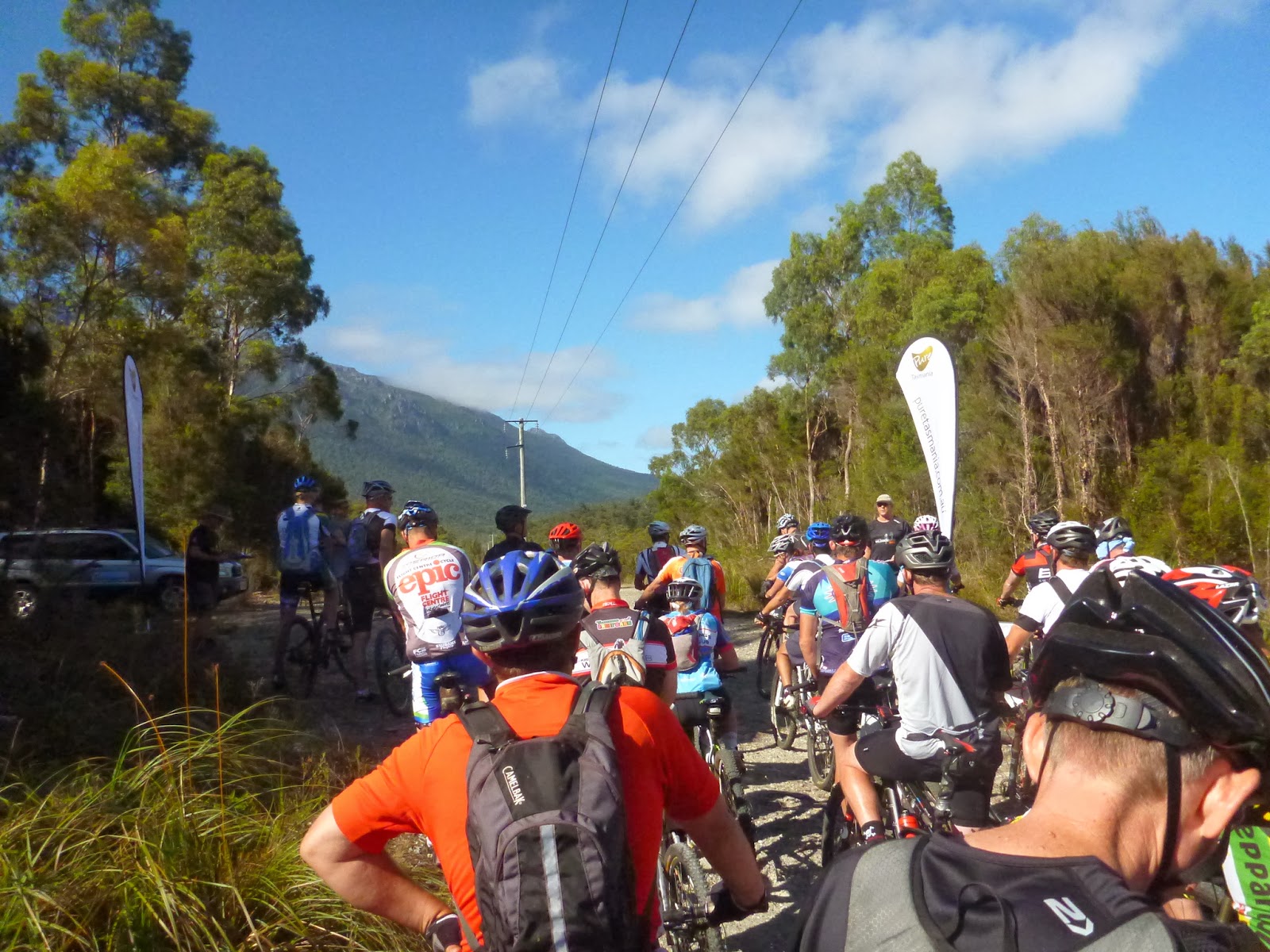 ... which brings me back to my starts.

It takes at least 10 or 15 minutes of exercise for my body to realise that the 'idiot' in control (yes, that's me) isn't going to be stopping and resting any time soon and so it needs to start producing more energy.

The problem with this is that I don't have enough overall fitness to waste 15 minutes riding around warming up ready for the race start, and therefore my race starts follow a fairly familiar pattern of me launching off and quickly finding myself falling back through the pack ... a bit like a rock hurled into the air and coming back to earth.

Then what usually happens is that as soon I start feeling OK and begin moving back up through the pack ... we start hitting the technical sections, so everyone in front of me slows down and stops, and that's my race over ... 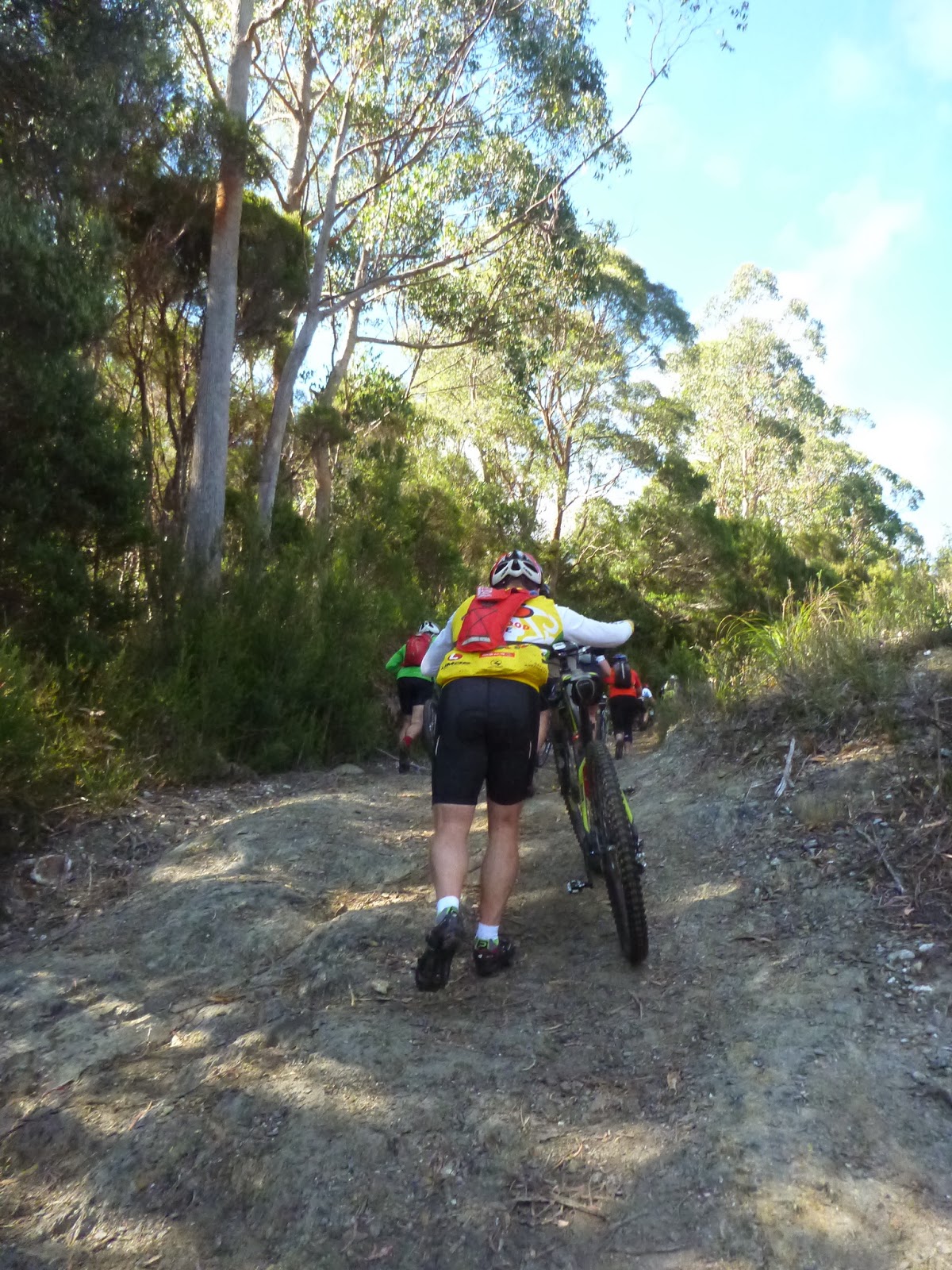 But that wasn't going to happen today.

I knew we had quite a lot of technical trails on this Sterling Valley track section and I was therefore determined to get myself in a position where I could ride them, not crawl over them.

So I went out hard, as hard as I could, and because of this I only started going backwards through the pack slowly ... not in my usual anchor like fashion.

Very quickly the pack lost its usual sprint start speed and I noticed an opportunity where most of the riders were trying to stick in single file to take advantage of the smoother, well ridden, side of the track ... so I took the rougher side and started moving my way up through the pack.

Within the first couple of kilometres I had picked up a half dozen riders using this strategy and I was already composing today's triumphant blog post in my head telling stories of unending open tracks and fast descents  ...

Then we got to the bottom of a little hill, I saw the opportunity to hit another couple of cyclists, shifted up a gear, pulled out to the left, accelerated ... and had a stick go straight up into my drive chain and stick in the derailer.

I had to stop and pull the stick out and in the few short moments it took to do this, and then get back on and get some speed going up the hill I'd easily lost every spot I'd gained ... and a few more besides.

Not long after that we hit the single track ...

The climb up the old horse track to the Sterling Valley Pass is a beautiful bit of track and I don't want to overstate my cycling abilities here as I was working hard to get up this section and get past the occasional cyclist (in turn being overtaken by a few others).

But to give you some idea of the frustration with being this far back in the pack, there was a section towards the top which I was working up with another girl who was travelling at a similar pace and we came up behind two other riders, the girl I was riding with got off her bike and began pushing it up the track as quickly as they were riding up, but the two just wouldn't give us the track and we eventually had to be a bit rude and force our way past (of course just before it opened out anyway), but we'd travelled 600 or 700 metres at half the pace we'd like to have gone.

Then the track started going down ... and it was good.

The first section was wide (but rocky) gravel trails and afforded some great opportunities for getting past less technically adept (or less stupid) riders, then it was a (very) sharp right onto the Sterling Valley single track.

After passing a guy being helped back through the traffic flow by two others with a busted knee, I took a reality check and decided to push my bike down through the really technical top section before launching down the more sweeping section below.  Again this fast sweeping section was a bit frustrating with a few rider 'blocks' but at the second bridge I finally managed to get past the last of these and me (and some guy behind me) just let off the brakes and flew down the last section.

It was fun and when I caught up with the guy behind me later on he agreed.

I crossed the finish line ... just in time to get to the lunch buffet and watch the last of the muffins and savouries being devoured by those going back for seconds.

Then it was off to the pool to catch up with the support crew ... 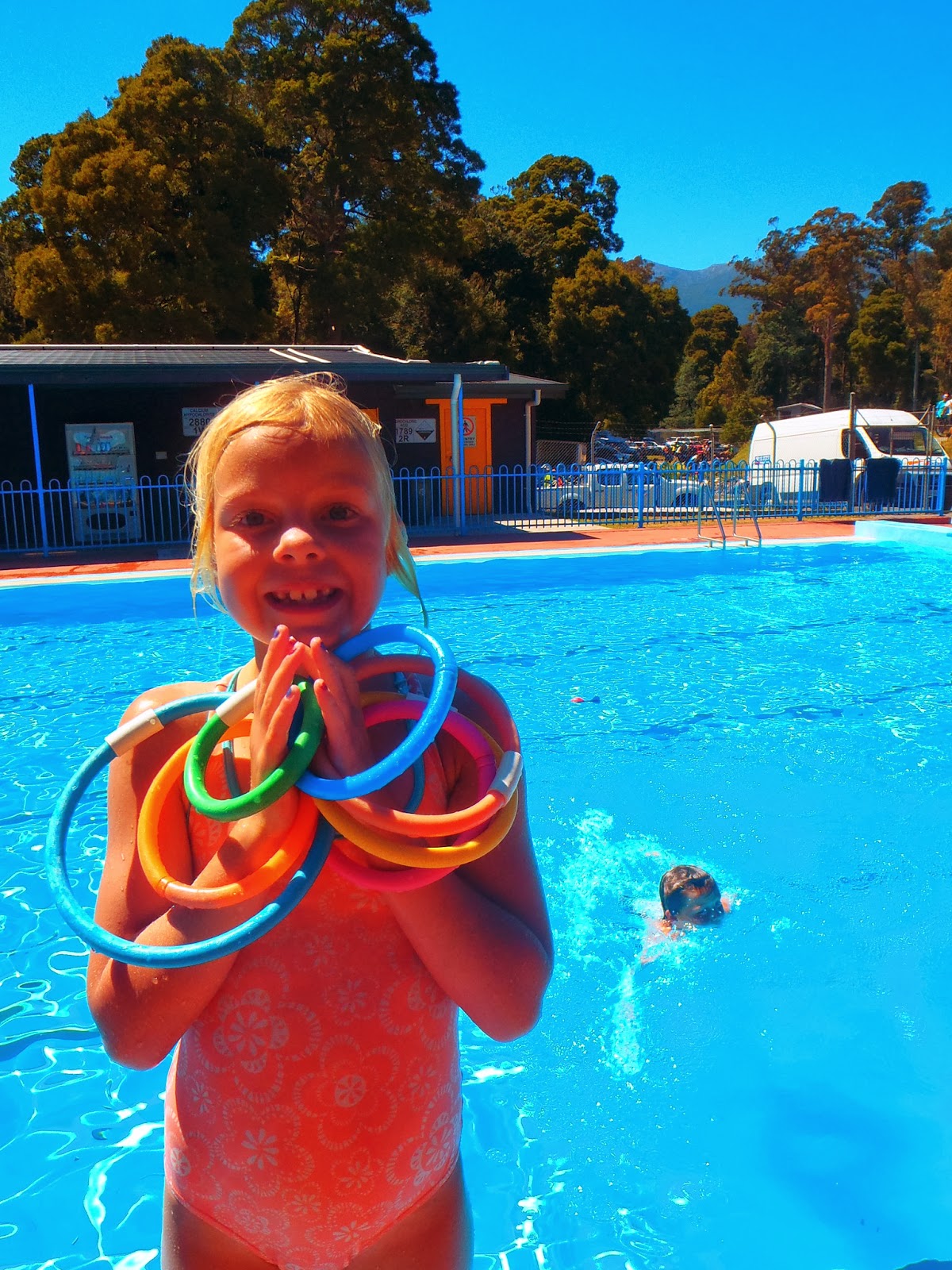 Apparently their morning had been equally stressful ....

They'd paired up with Jon McCombs support crew to go for an early morning ride out to Montezuma Falls only to find that the road was closed due to some mountain bike race.

In my "I just want to rest, cool down, and eat state", I never really quite understood the full story that was excitedly shouted at me by Markus as I crossed the finish line, but I do know that Markus was very excited that a guy called Colin Locke, who was apparently a friend of mine, and who they'd just met out at the junction to Montezuma Falls, had fixed his bike.

Kim later explained that Colin had been a really nice guy who helped them out with loading and unloading bikes and who had fixed Markus's drivechain which had broken.  In the process he had recognised Kim from a recent Cadbury Half Marathon post, so whoever you are Colin - thanks (both for helping Kim out and for being the fourth person after Kim and my mum who reads this stuff!).

So after the unsuccessful visit to Monetezuma Falls, my support crew had firmly established themselves at the Rosebery swimming pool early in the day and were still there two hours later when I set off for competition stage 4 - Montezuma Falls.

As I set off into the hot dry heat of the afternoon I was so jealous of that.
Posted by Tassierambler at 14:30