Having just forked out another two hundred plus dollars online purchasing two new chains (yes, as you are about to see I'm getting conservative), a new multi tool - with chain breaker (detecting a theme yet?), a new saddle bag (to carry my new chain breaker), a new cassette and several other shiny new objects which caught my eye whilst making my purchases, I think I am in a pretty good position to be able to say that mountain biking is an expensive hobby. 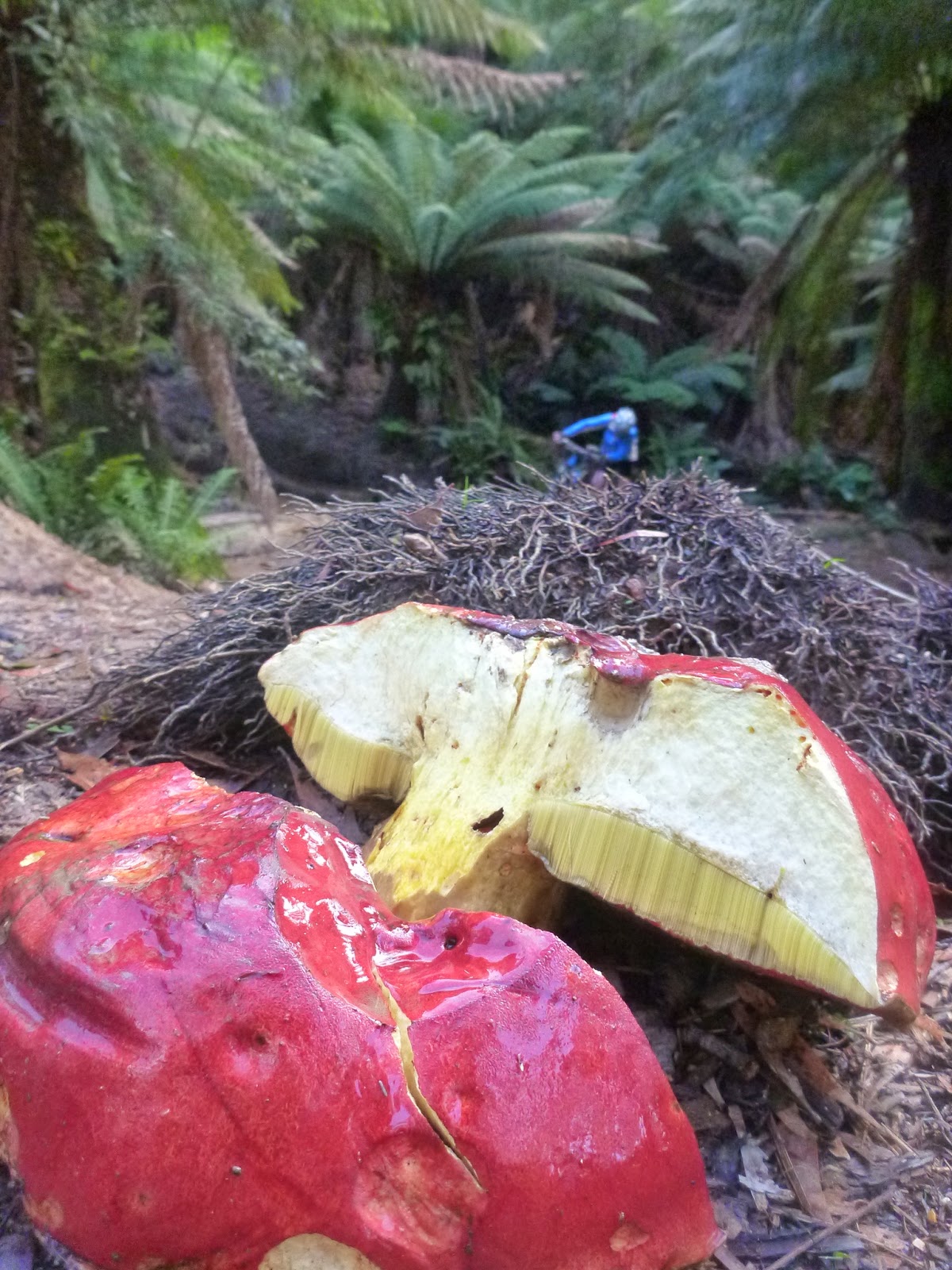 But with that said, if you don't spend the money on all these things then you can equally fork out over $100 in fuel, $140 for a nights accommodation, $60 for a meal out, $16 to feed your (I mean, my) caffeine habit ... all to drive to the other end of the State, cycle 13kms and then have your chain snap, leaving you to walk back to your car, and go home with your tail between your legs because you left the following important tool (of which I have at least 3 or 4) sitting in your toolbox at home ...

Which is my long way of saying that yet another weekend did not go to plan.

Actually, for once, things weren't as bad as they may seem because our real reason for heading up north this weekend was because Kim wanted to check out an old Surf Ski she'd found on gumtree which was located at Devonport.  So, I happily (though Kim may suggest the word grumpily would be more appropriate) revised my plans of a weekend up at Ben Lomond and was quite happy (not grumpy) to combine a "buy a new surf ski" road trip with a "let's ride the cranky penguin route" road trip to make a good weekend that we could both enjoy.  The only condition that I put on the trip was that I got to choose where Kim would try out her brand new secondhand (and extremely tippy) surf ski ... 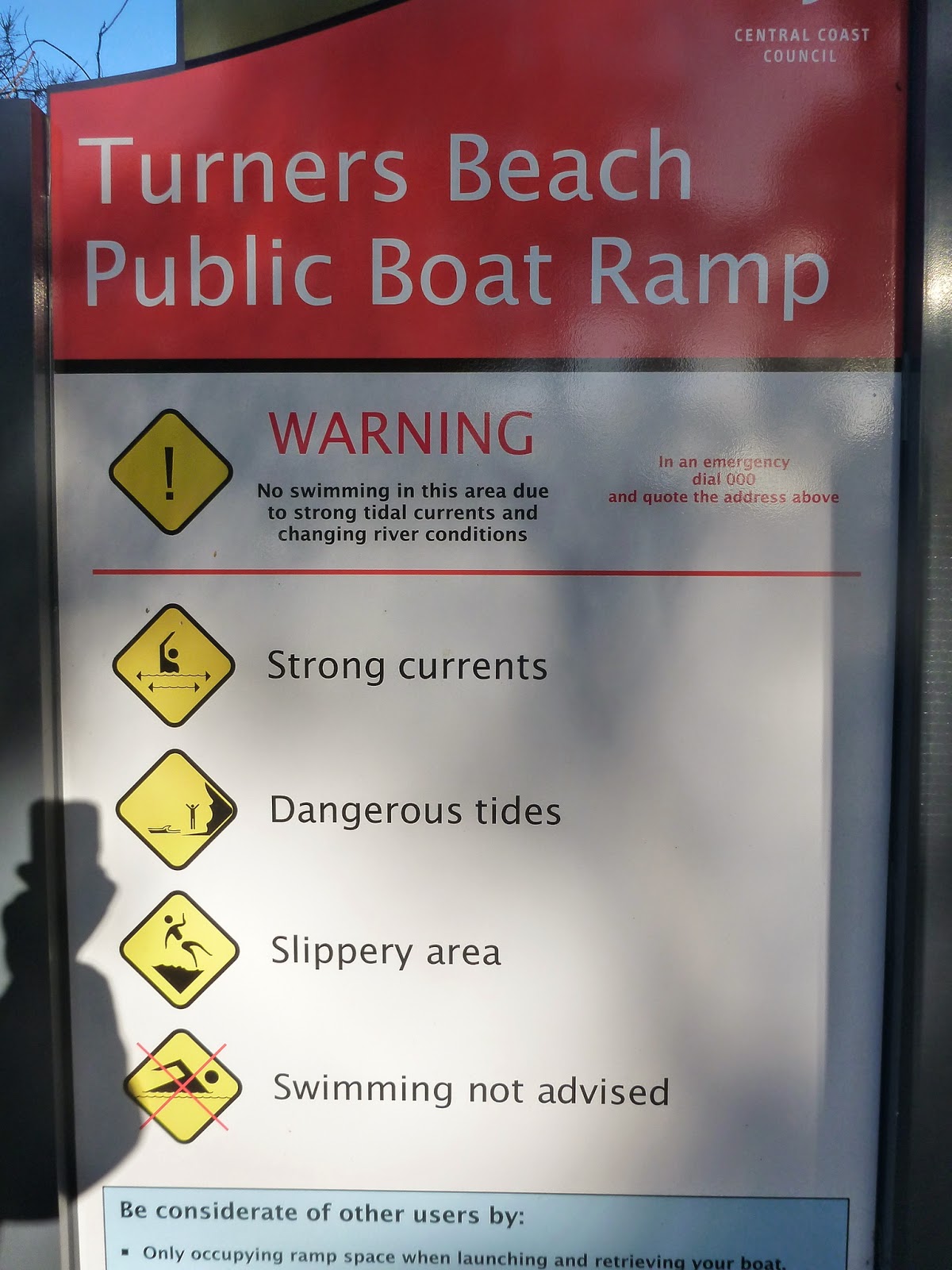 I also somehow timed it so she went paddling during the fastest ebb tide ...  but fortunately she didn't come out of the boat.

As to the mountain biking, well our plan was just to ride (and this time enjoy) the sections of the Cranky Penguin MTB route from last year that is (as far as I am aware) open to the public and legal to ride. 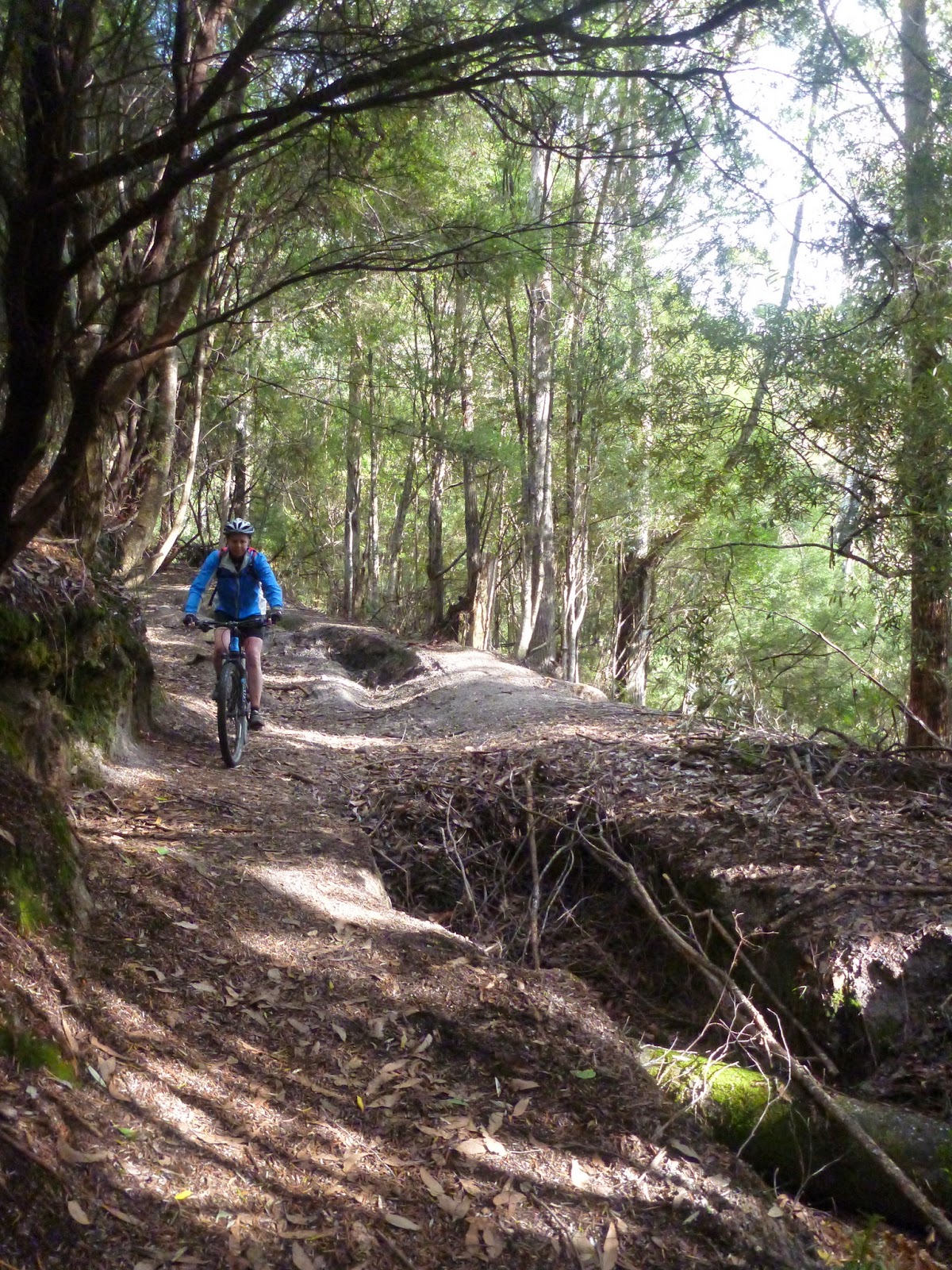 That is we planned to ride the outer loop section (which Cranky Penguin Marathon riders rode twice) reached from the end of Dial Road by driving past the moto-cross park, down the hill and then parking somewhere around the start of the Trail Bike Area (I actually chose to drive down into the trail bike area and park at the cross roads (Dial Creek Road) where the trails cross each other as this meant we didn't have to end the ride on a sharp uphill - instead we got to ride that at the start.   There was only really room for one car here though, and you probably wouldn't want to come here without a pretend 4WD).

From there, it was pretty much all uphill for quite a while. 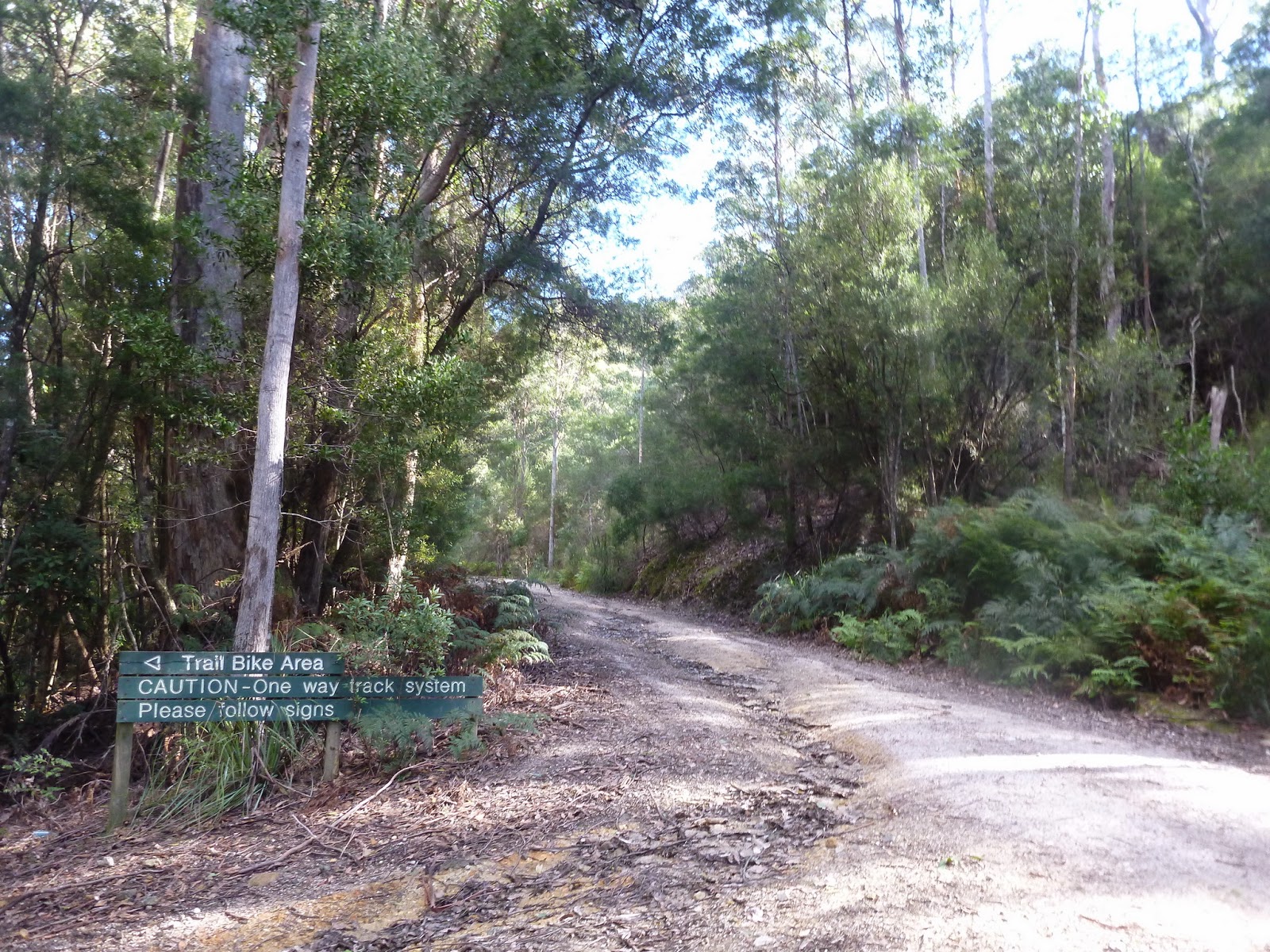 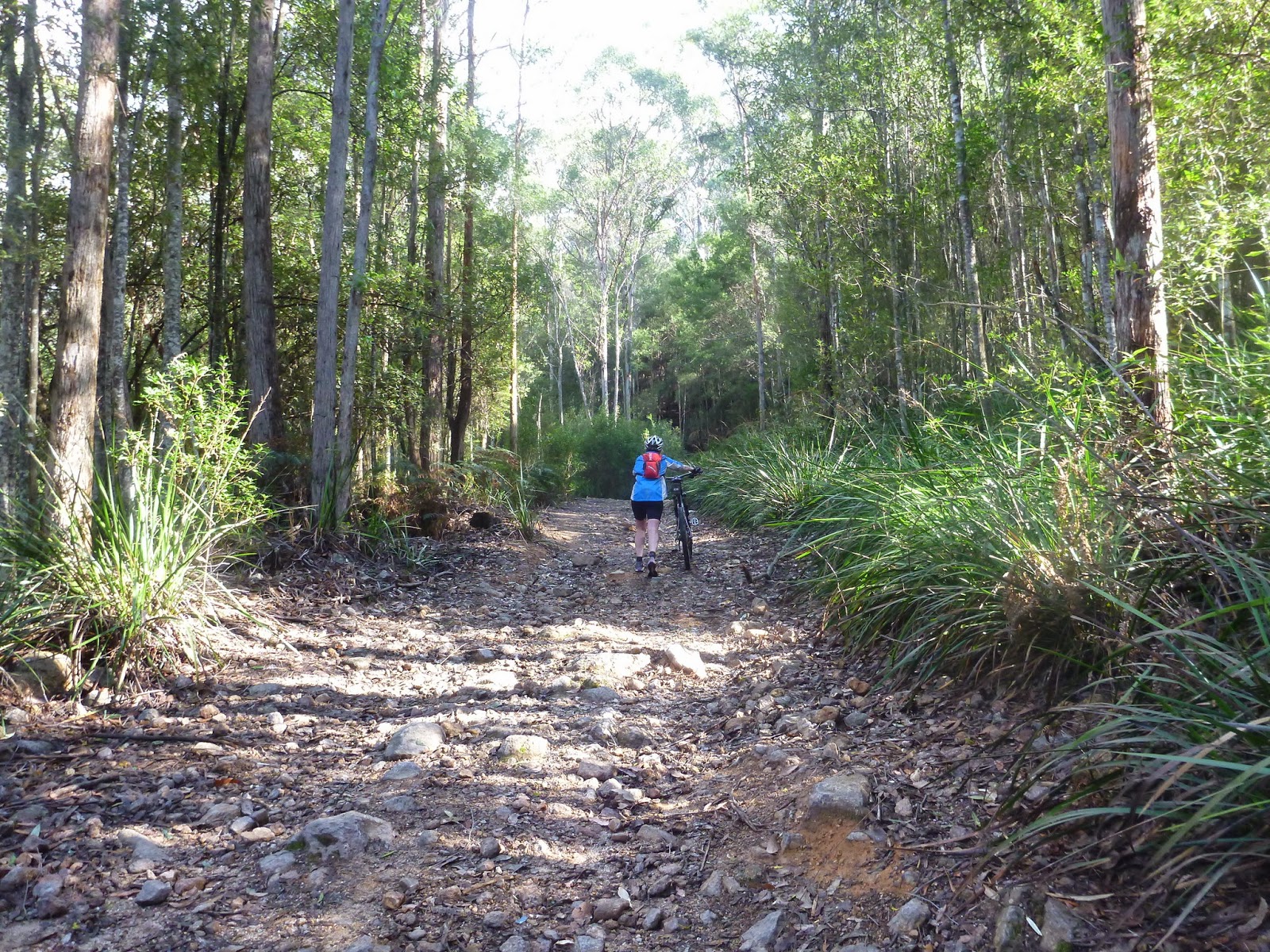 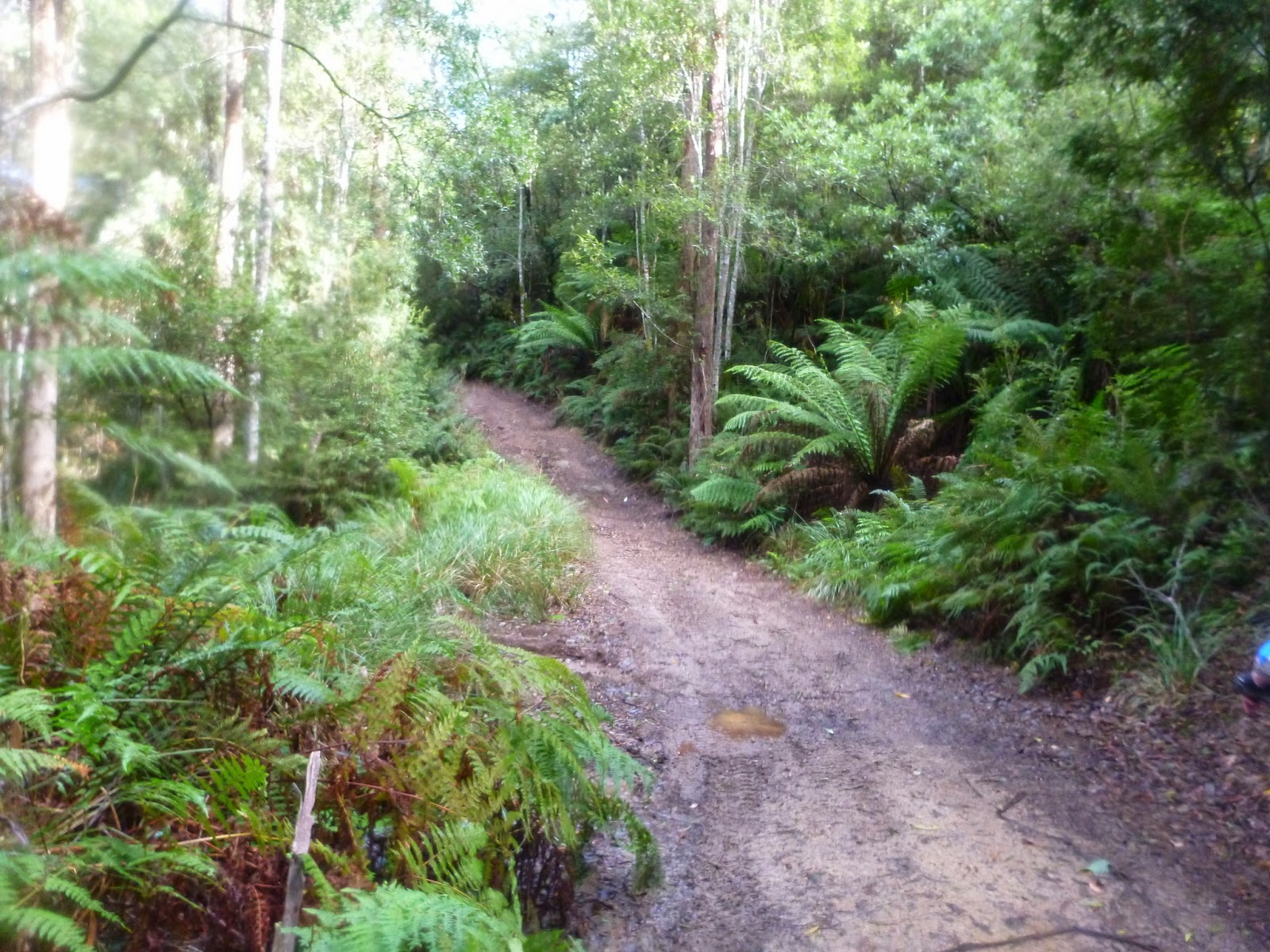 Though I think we both enjoyed the climb, albeit for slightly different reasons:  Kim confessed to 'zoning out' of the course when racing it late last year and not really taking much of it in (it really is a beautiful area) which she was able to do this time, whereas when I was riding this section during the race I was still recovering from the sauna like experience that resulted from trying to cycle the course in a Penguin suit and was just thinking "is this ever going to end, and how come a guy on a unicycle is in front of me?!?"

We eventually arrived at the top of Iron Cliff Road where you follow the single track off towards Mount Duncan, and although the trail was much easier to ride (having not already been churned up by so many riders) both of us still found this single track section pretty testing and there was almost as much pushing as there was riding until we got out to the top of the steep climb and got to start heading downhill again.


I loved that downhill single track section, and strangely find the climb back up to the Mount Duncan turnoff after the creek crossing to be almost as much fun ... though that may be because I didn't try it in a car ... 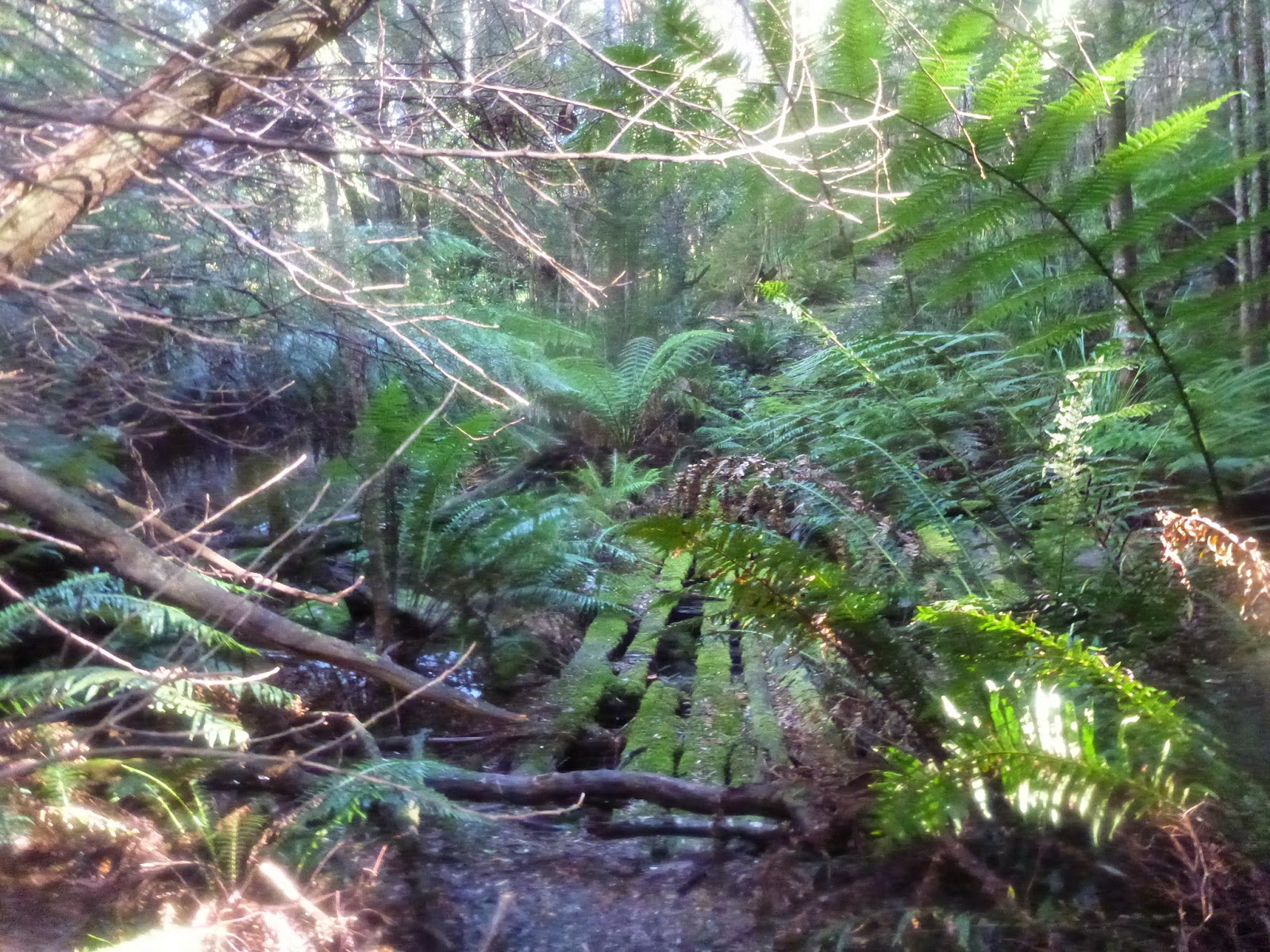 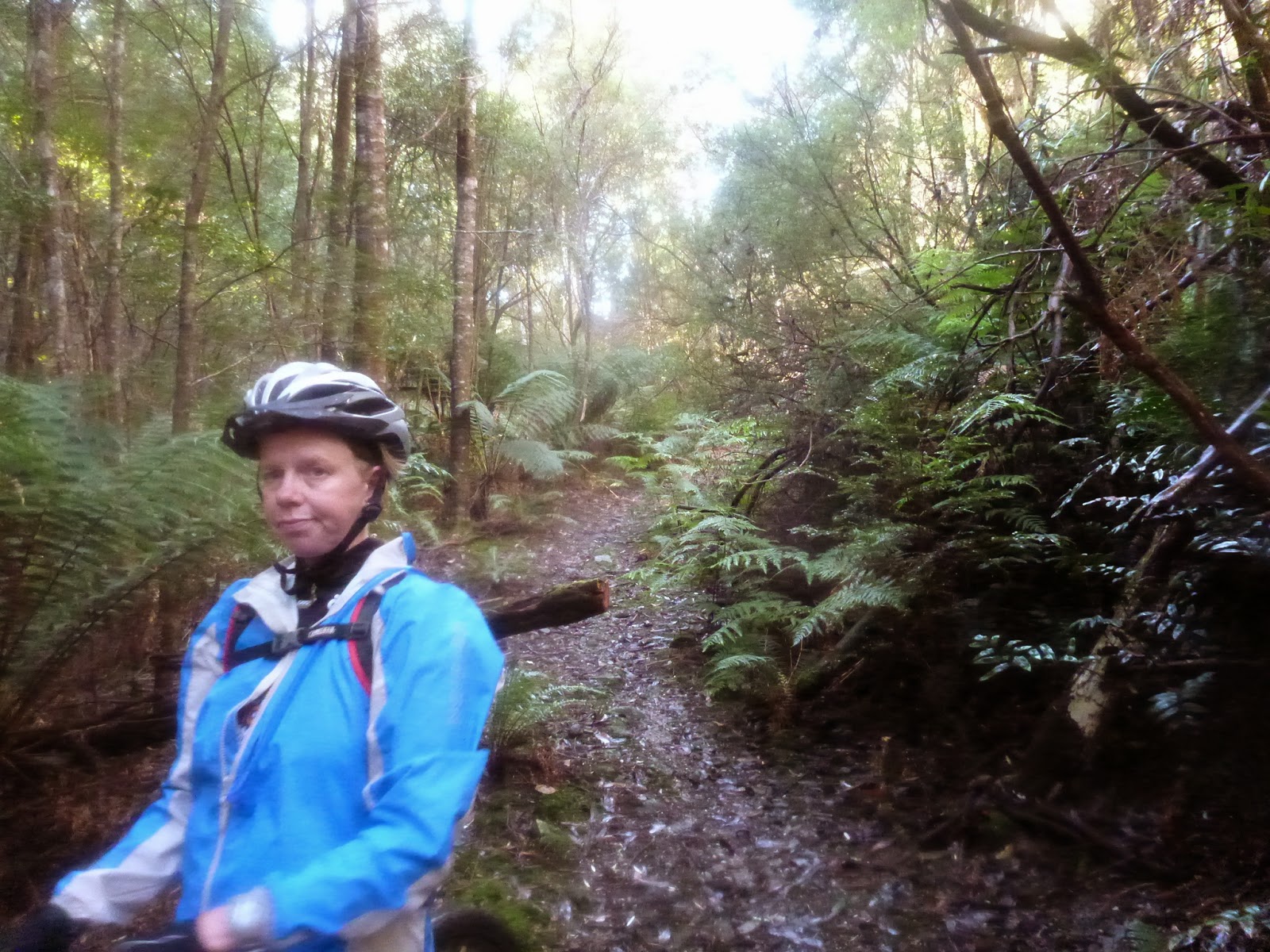 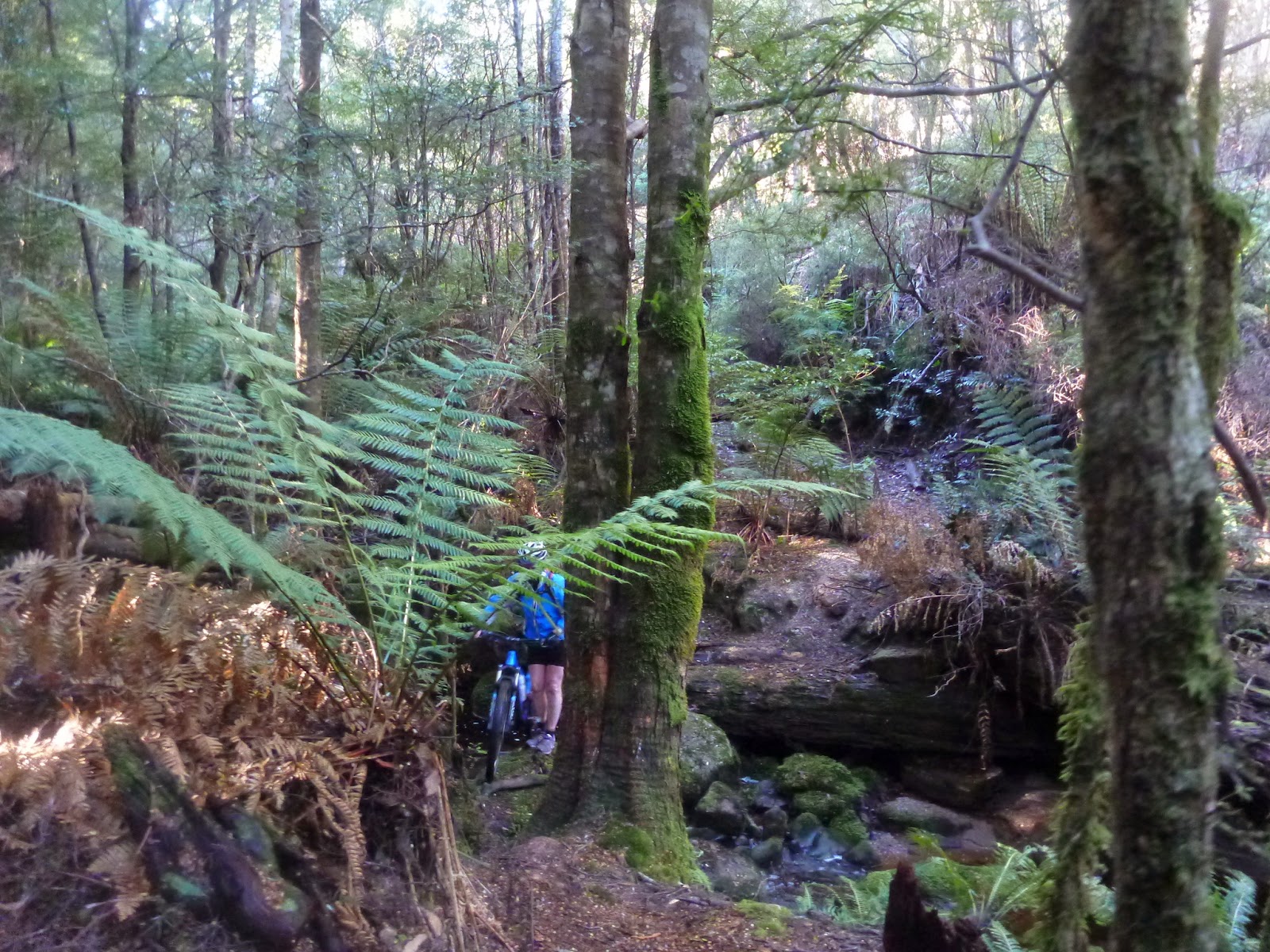 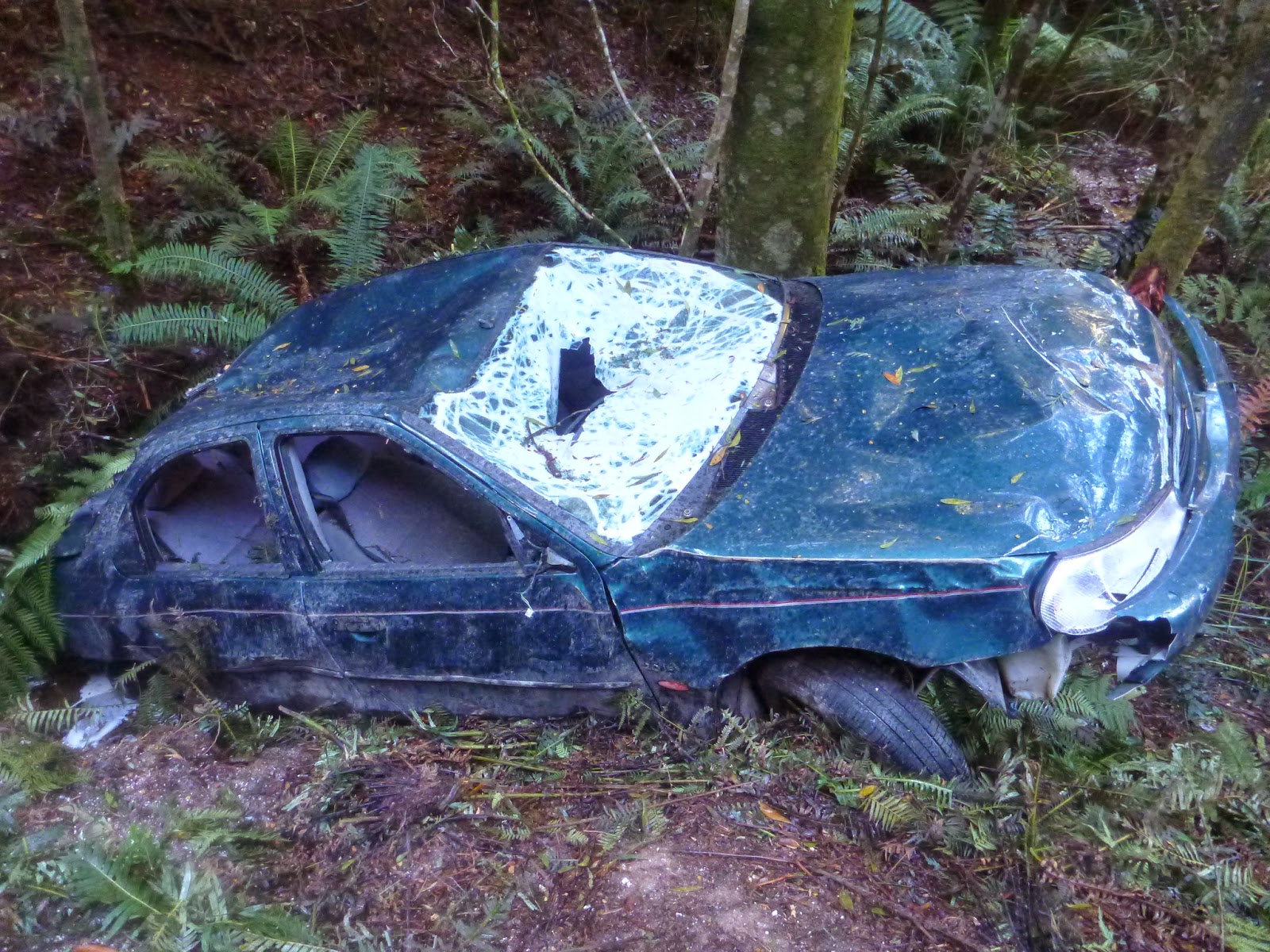 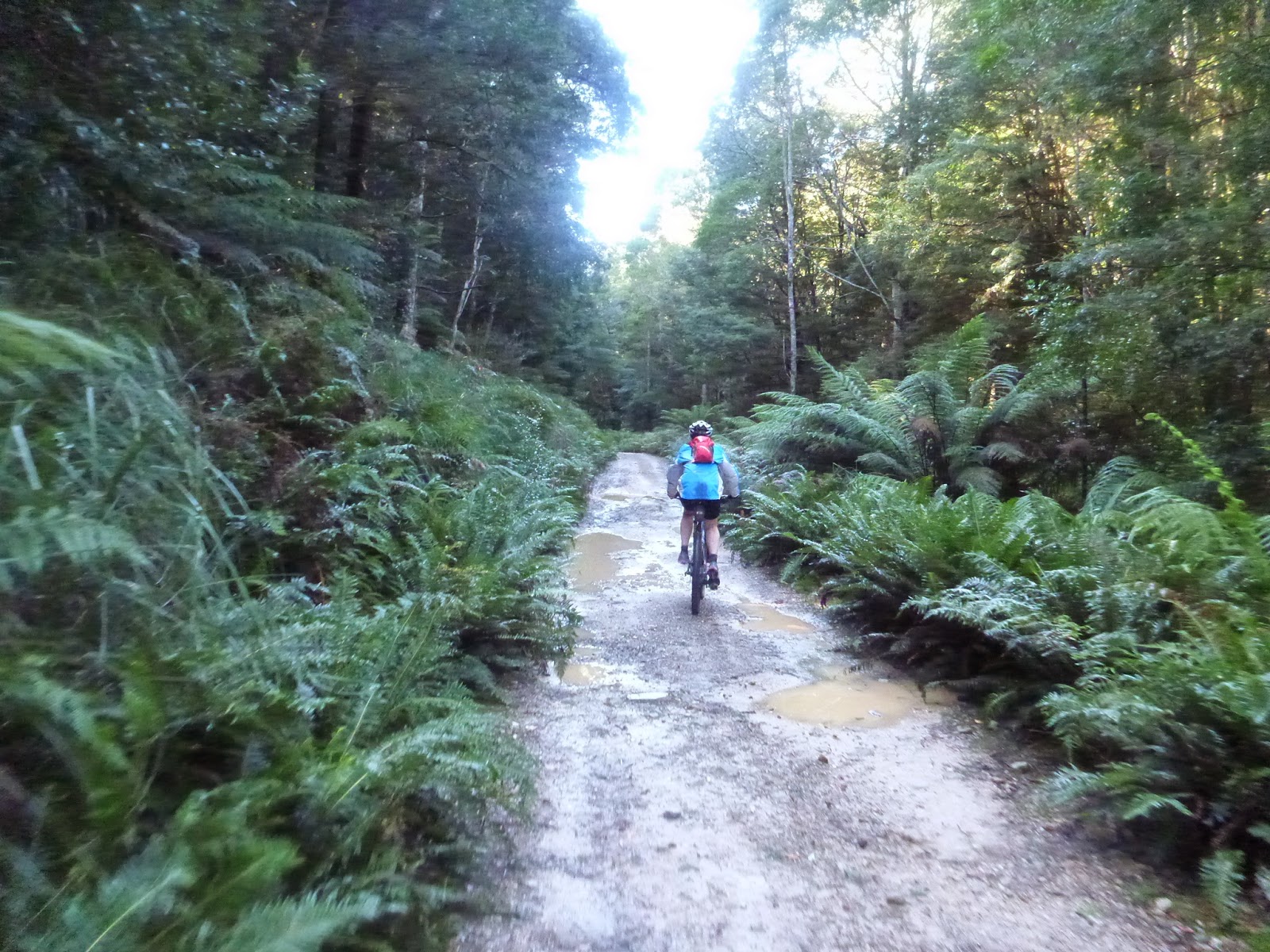 Once back up at the top of the hill we followed the route that is shown on the 1:25000 series maps as "Dial Creek Road" but which all of us who have ridden it know is in fact a brilliant fun descent with lots of nice little features on the way down to keep you alert ... 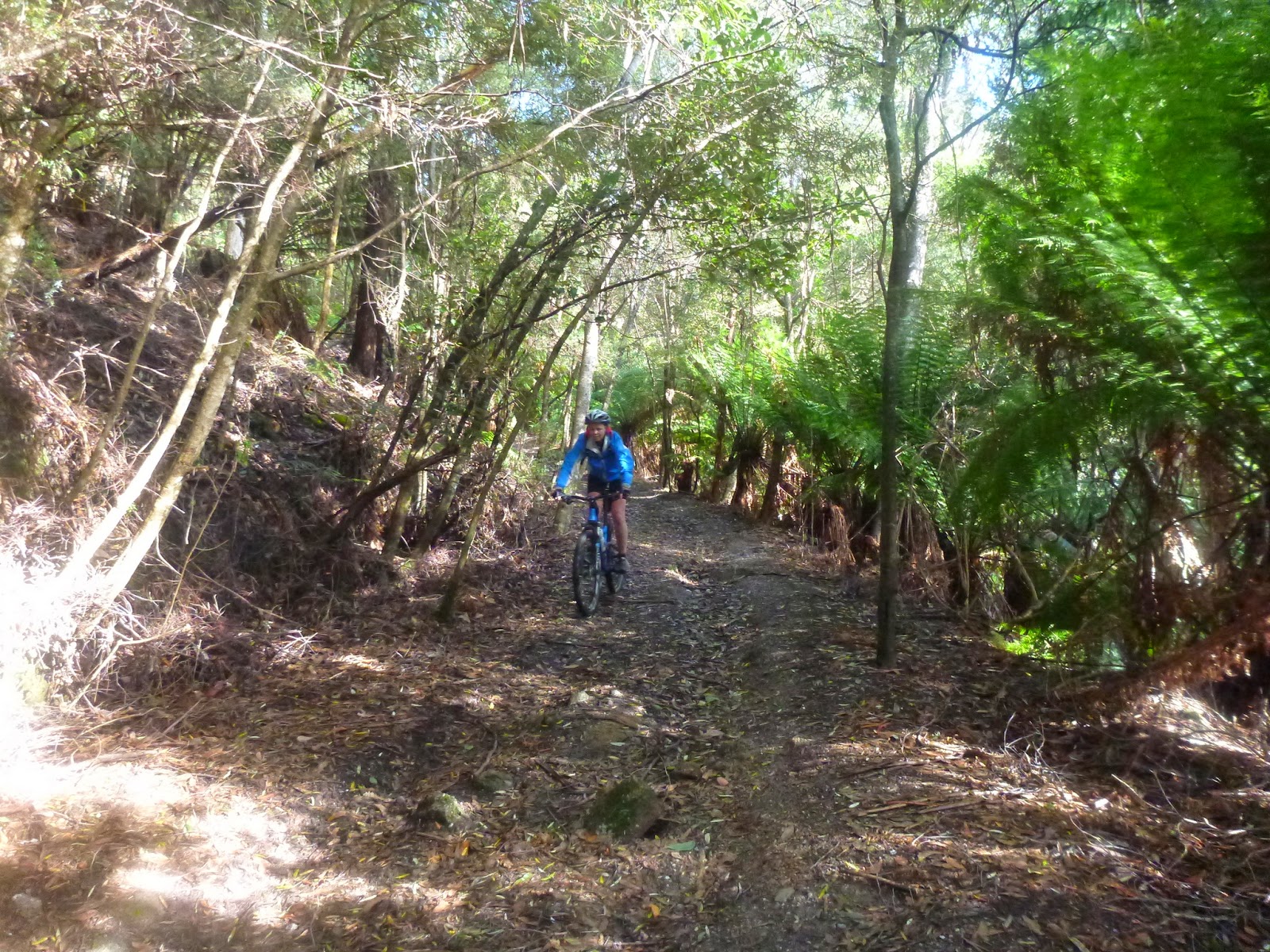 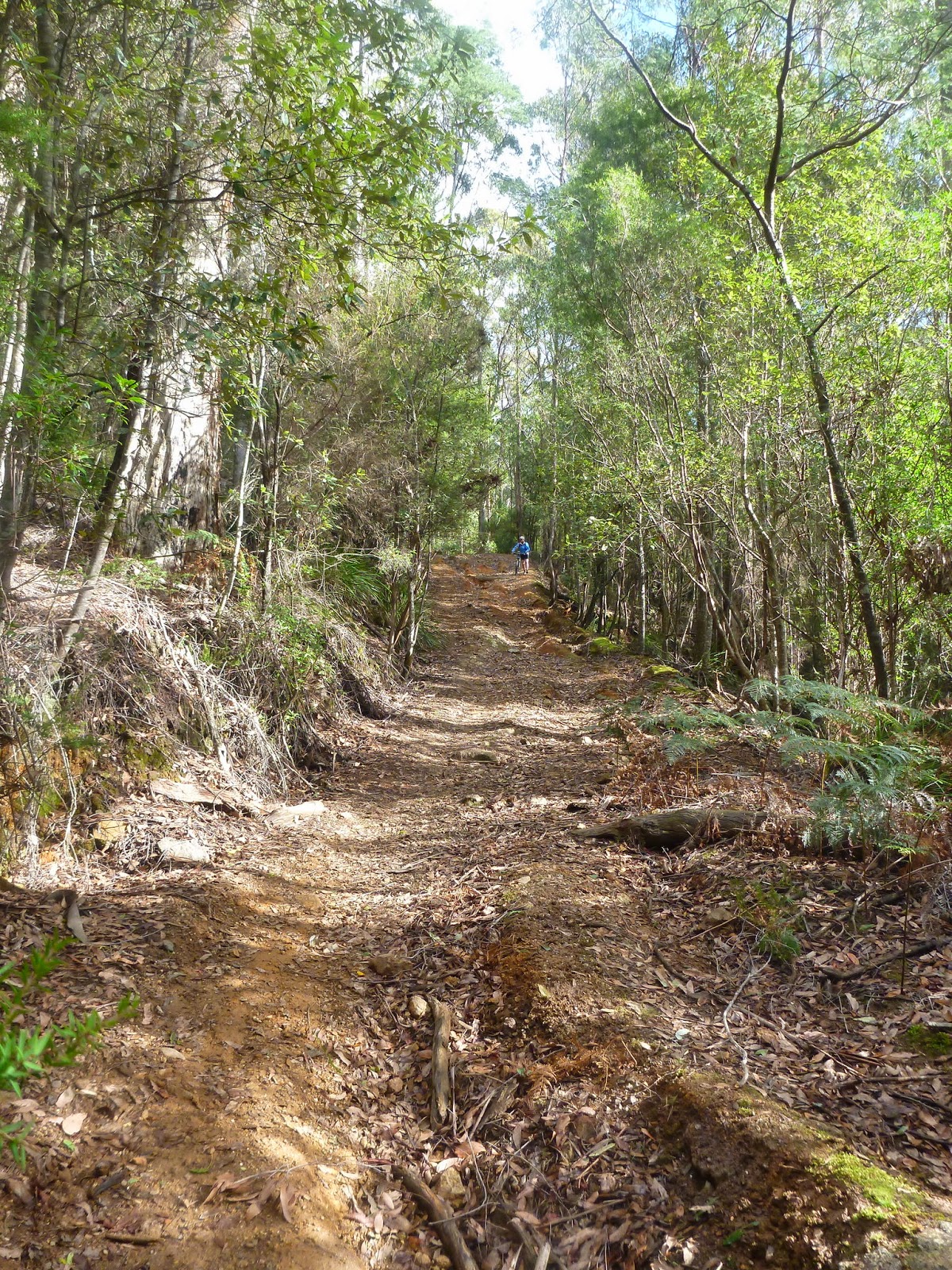 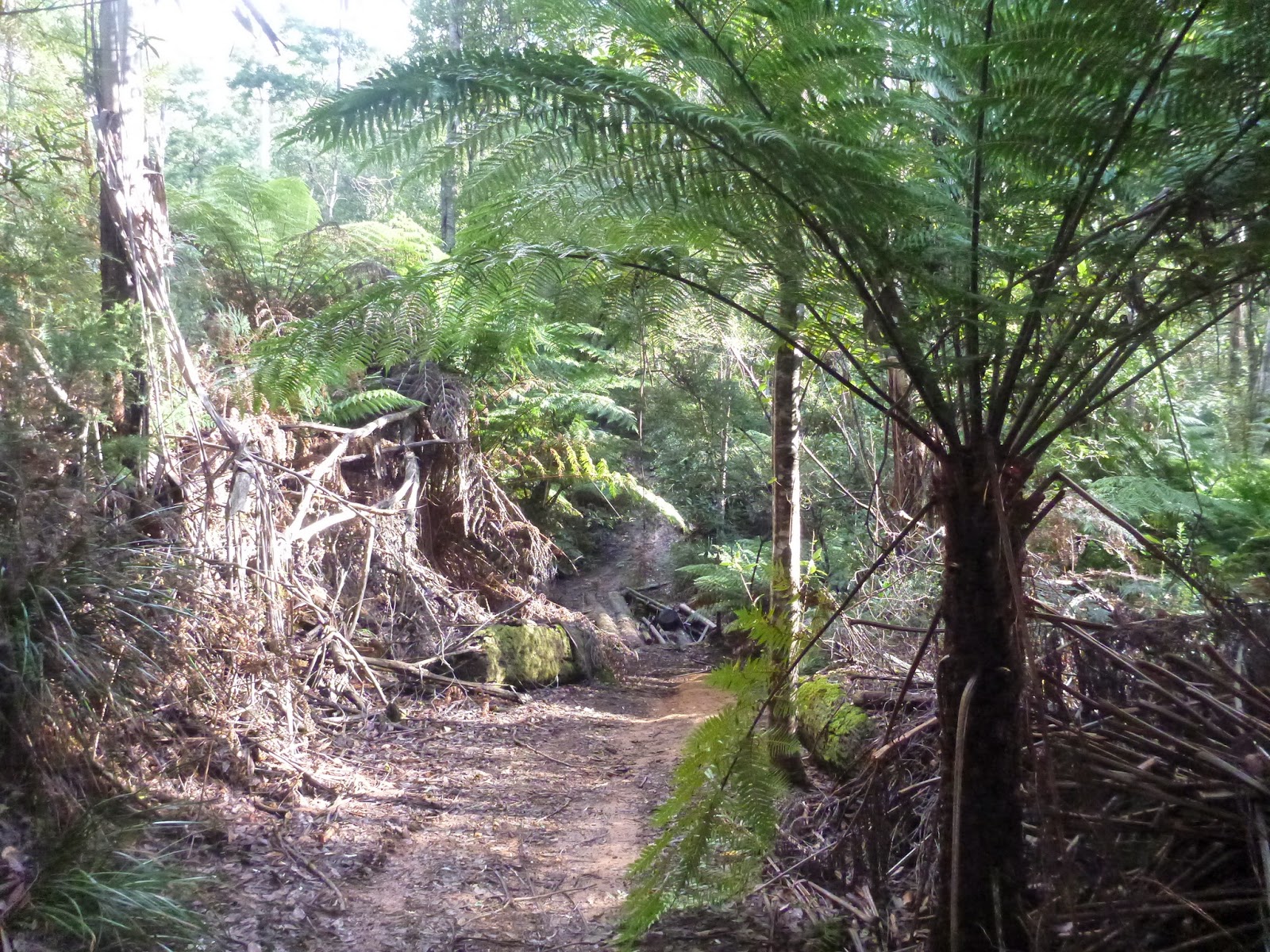 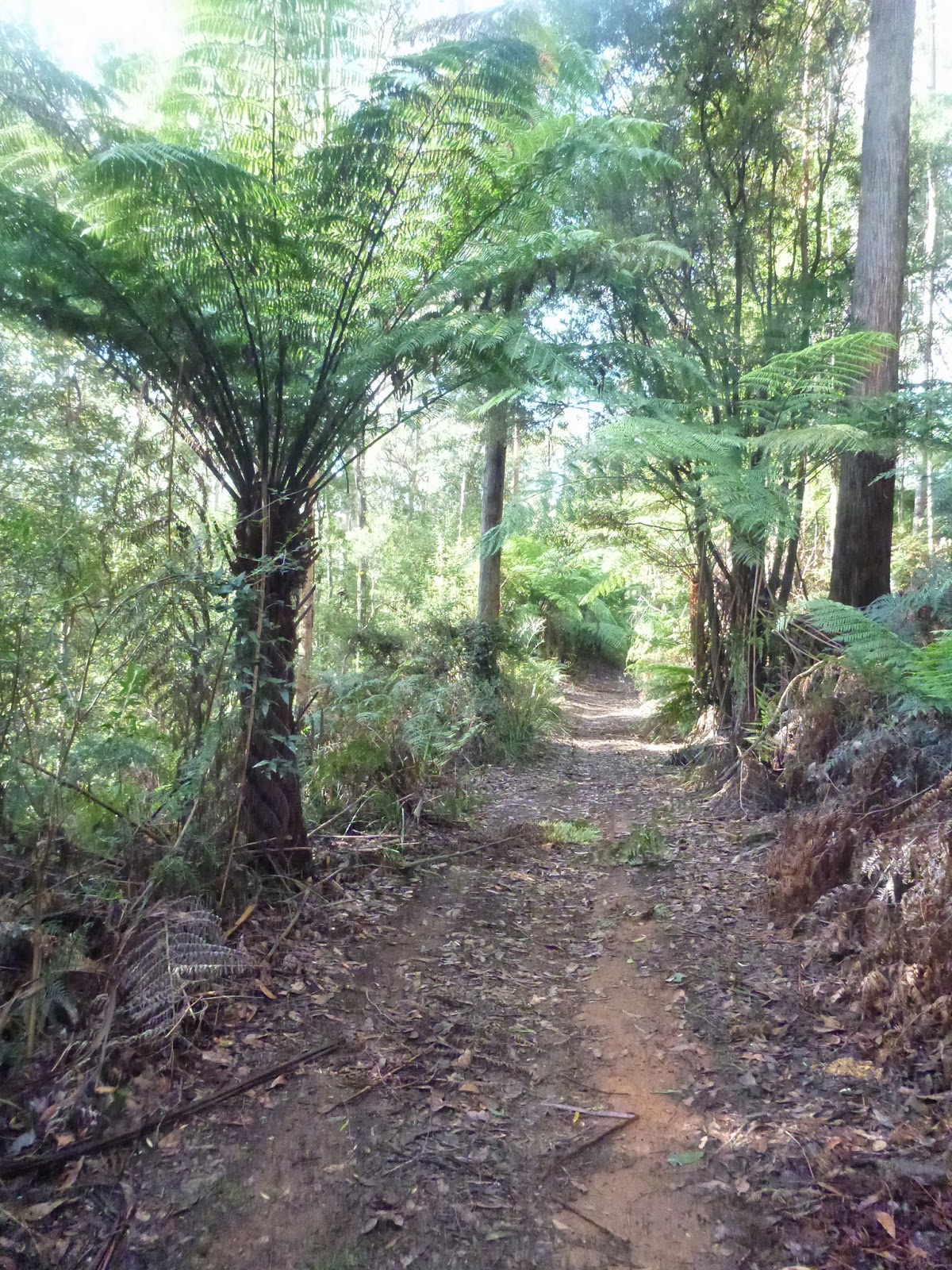 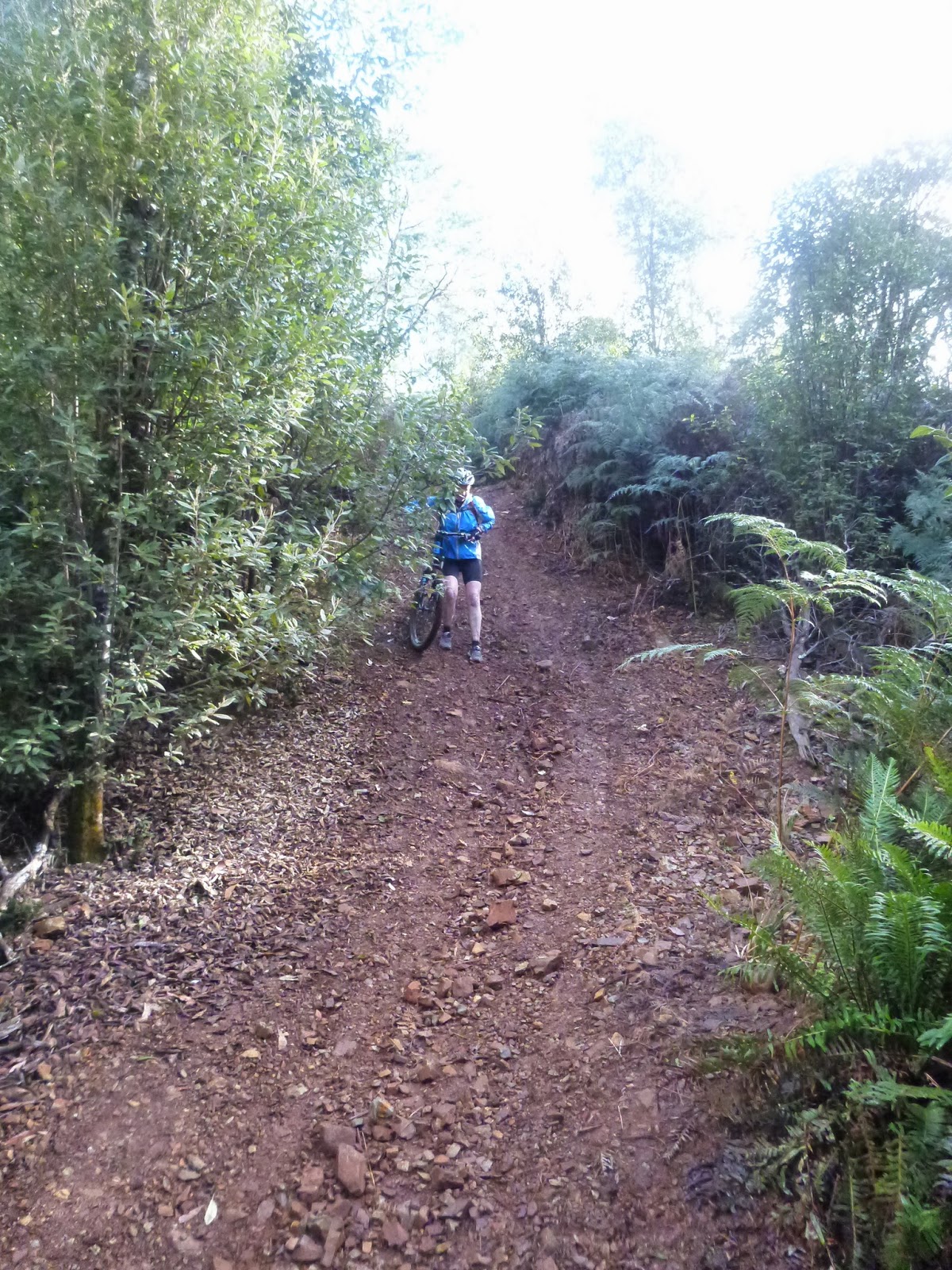 Now whilst I may not have remembered to carry a chain breaker with me today, after last weekends ride around Trig Hill which needed some significant clearing, I had added one other tool to my tool kit ... an old pruning saw ... 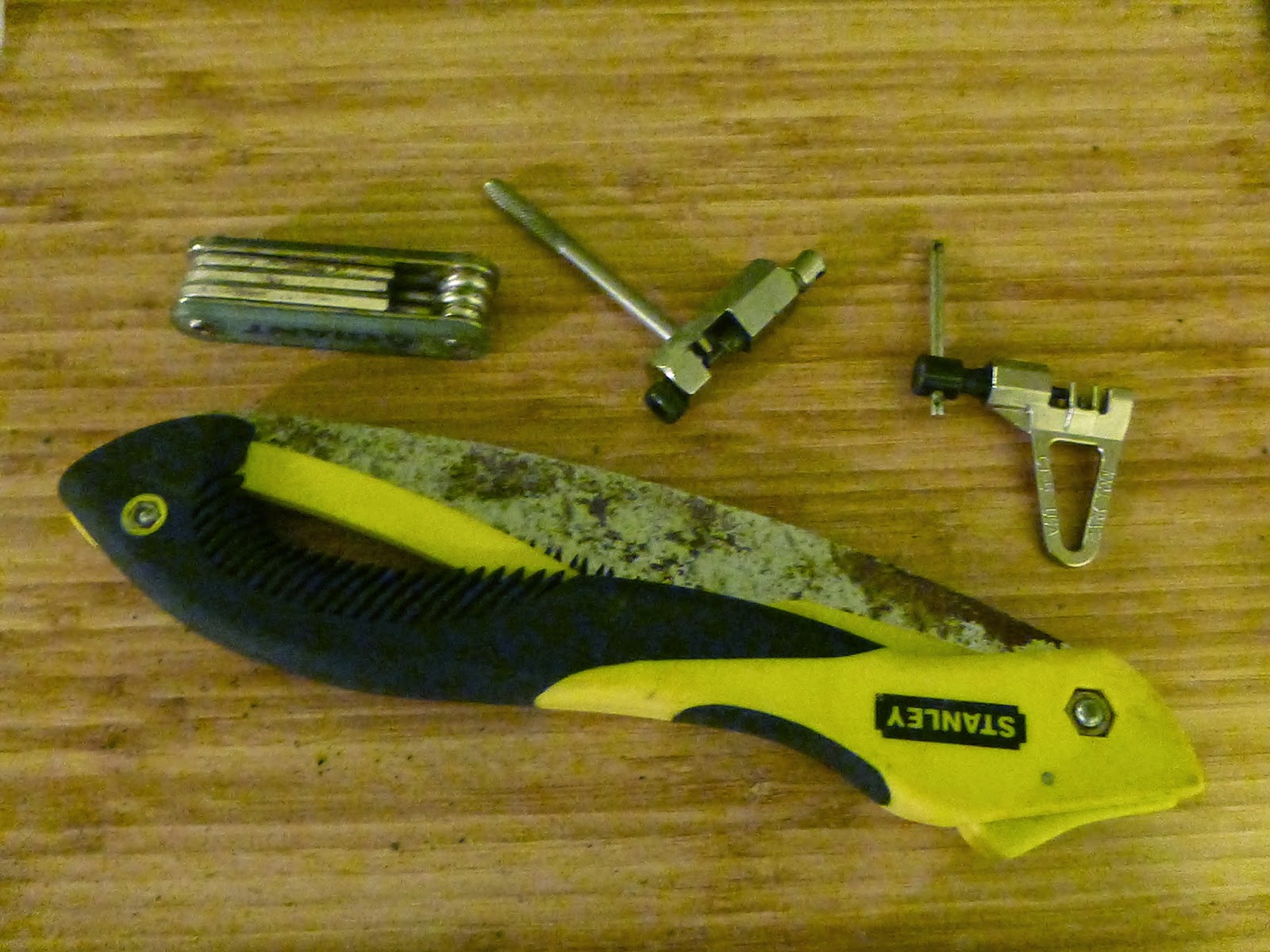 So this time when we came across this blocking the track  ... 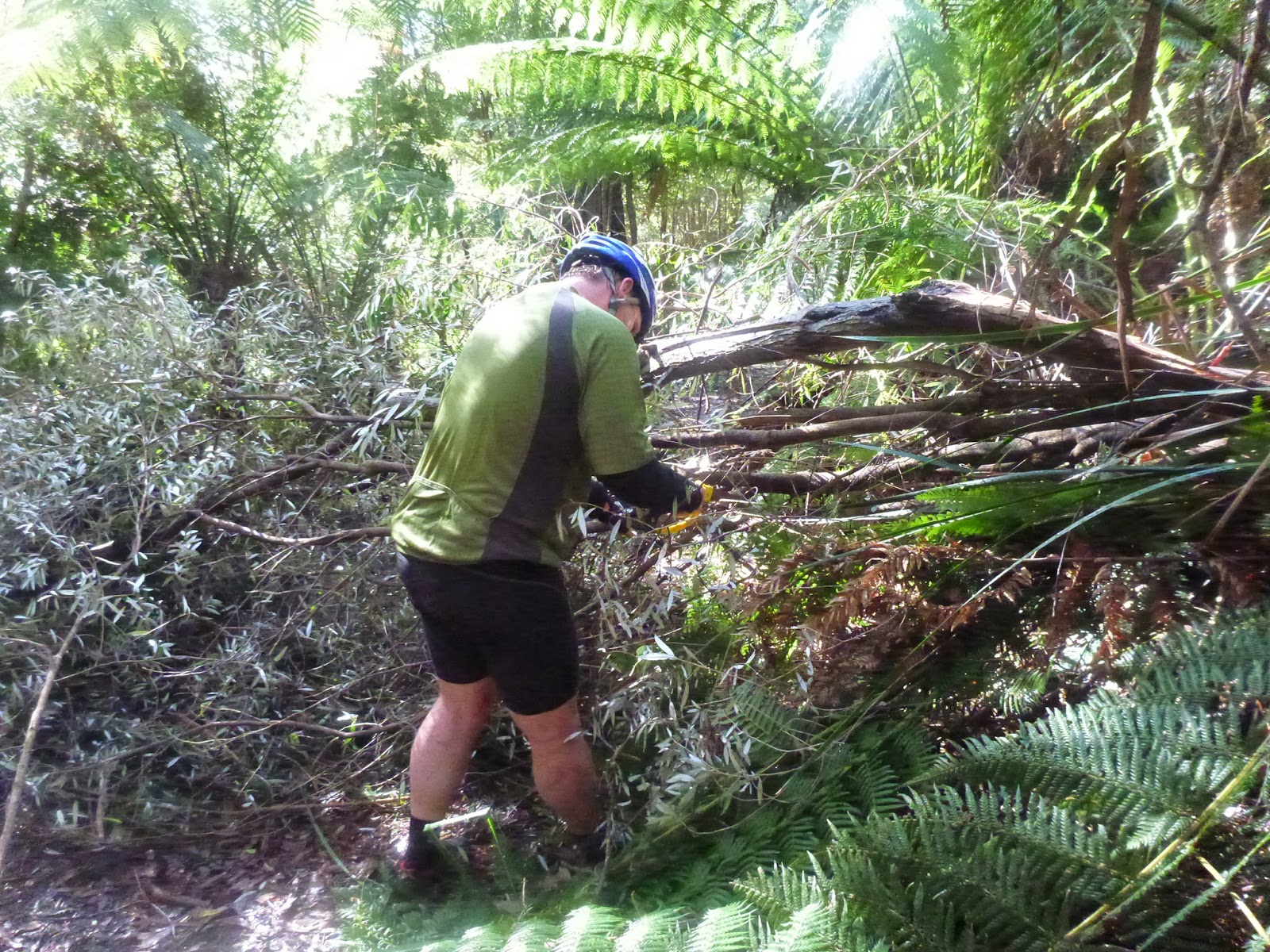 Instead of having to gripe about it in this blog (and we'll fast forward 10 minutes here as it was quite a big tree and required lots of cutting) we got to do this ... 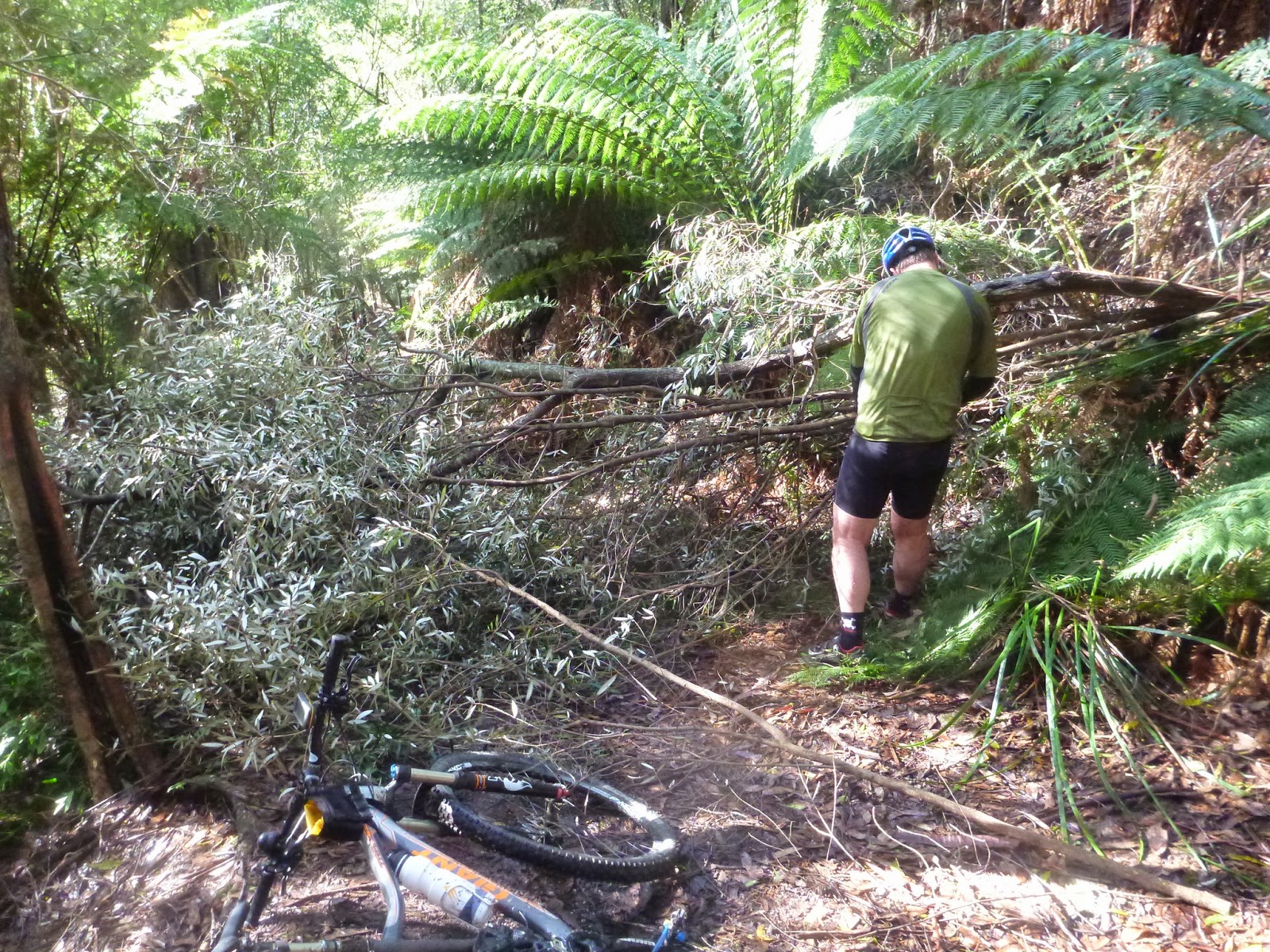 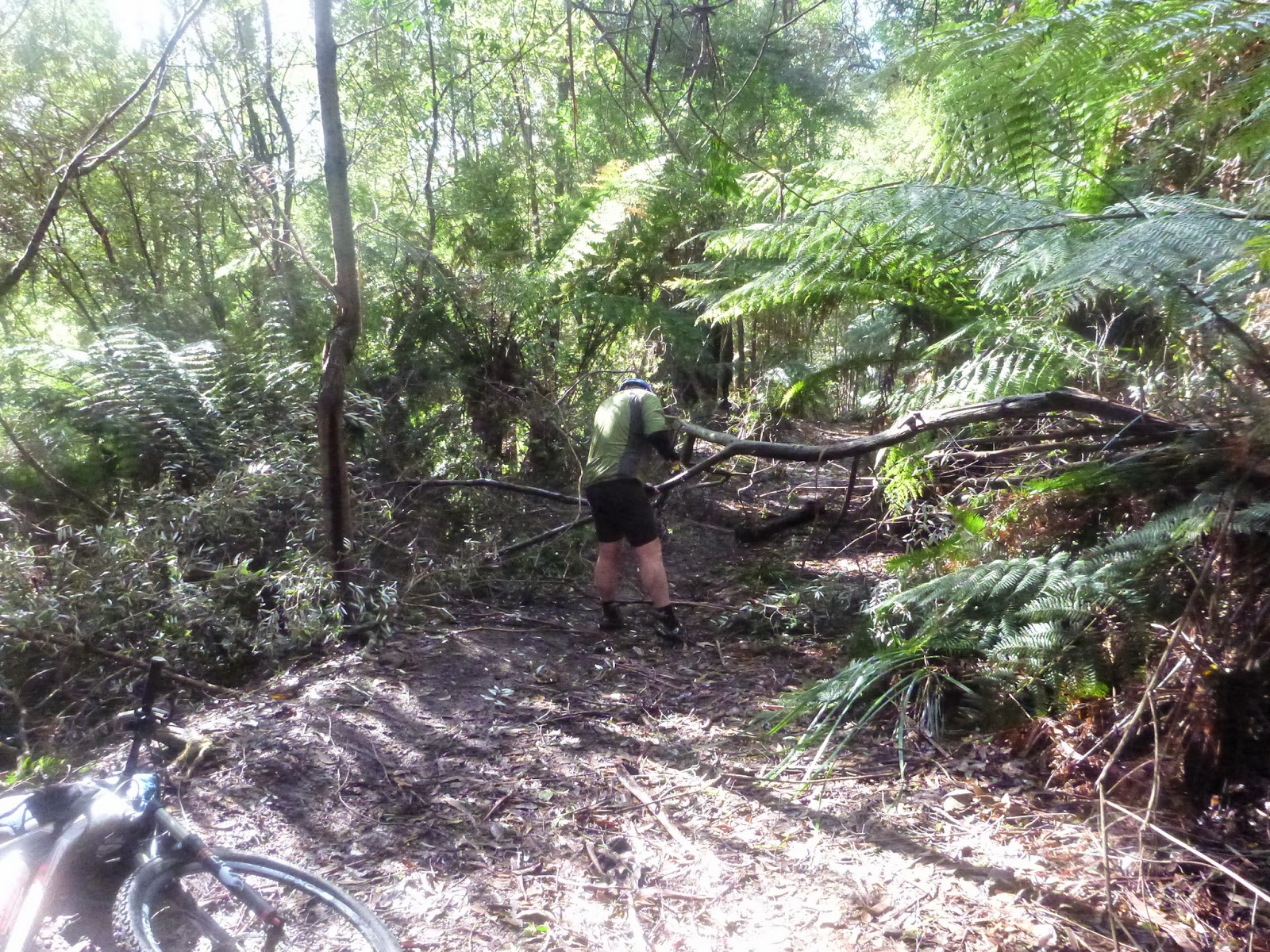 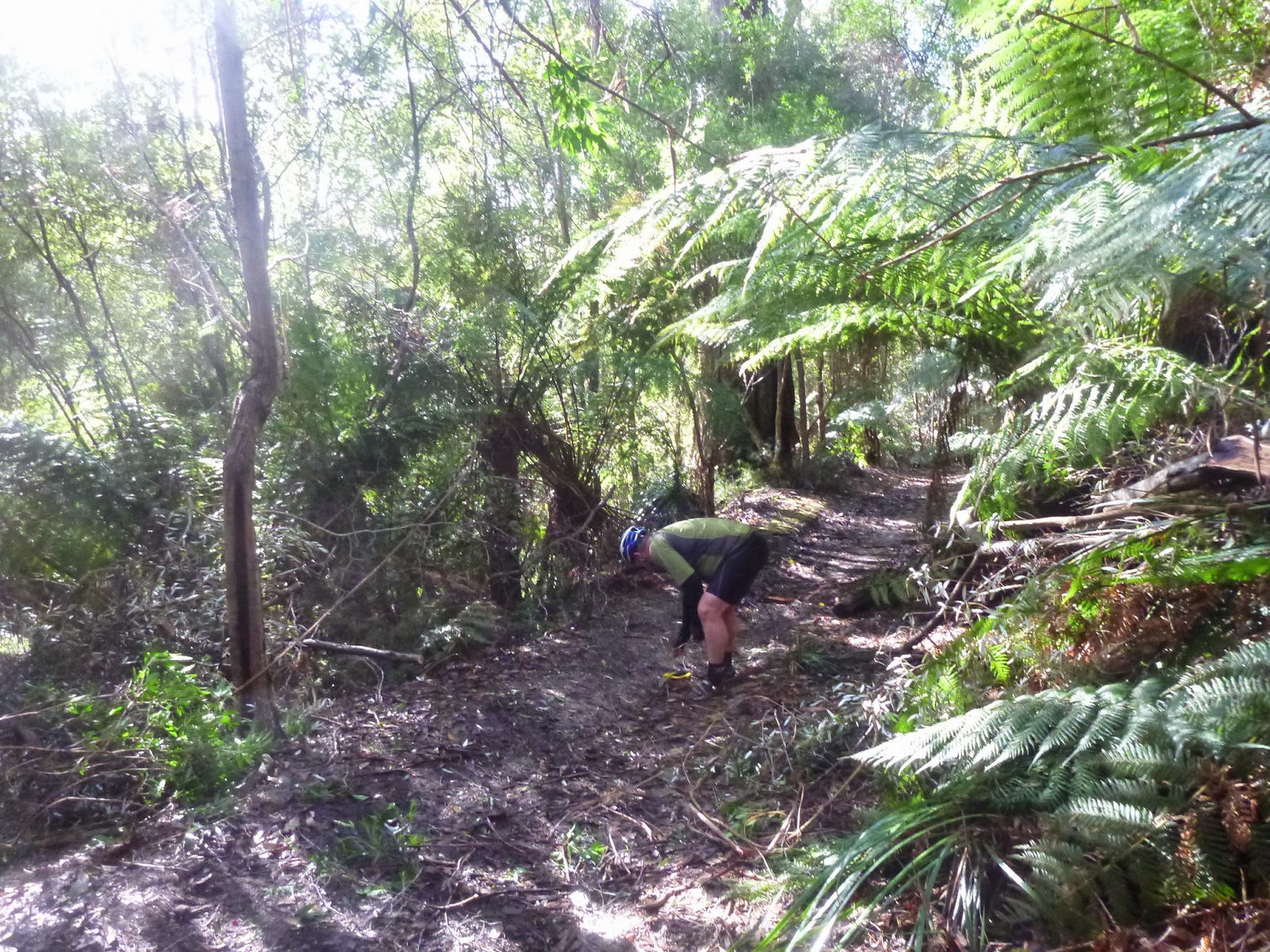 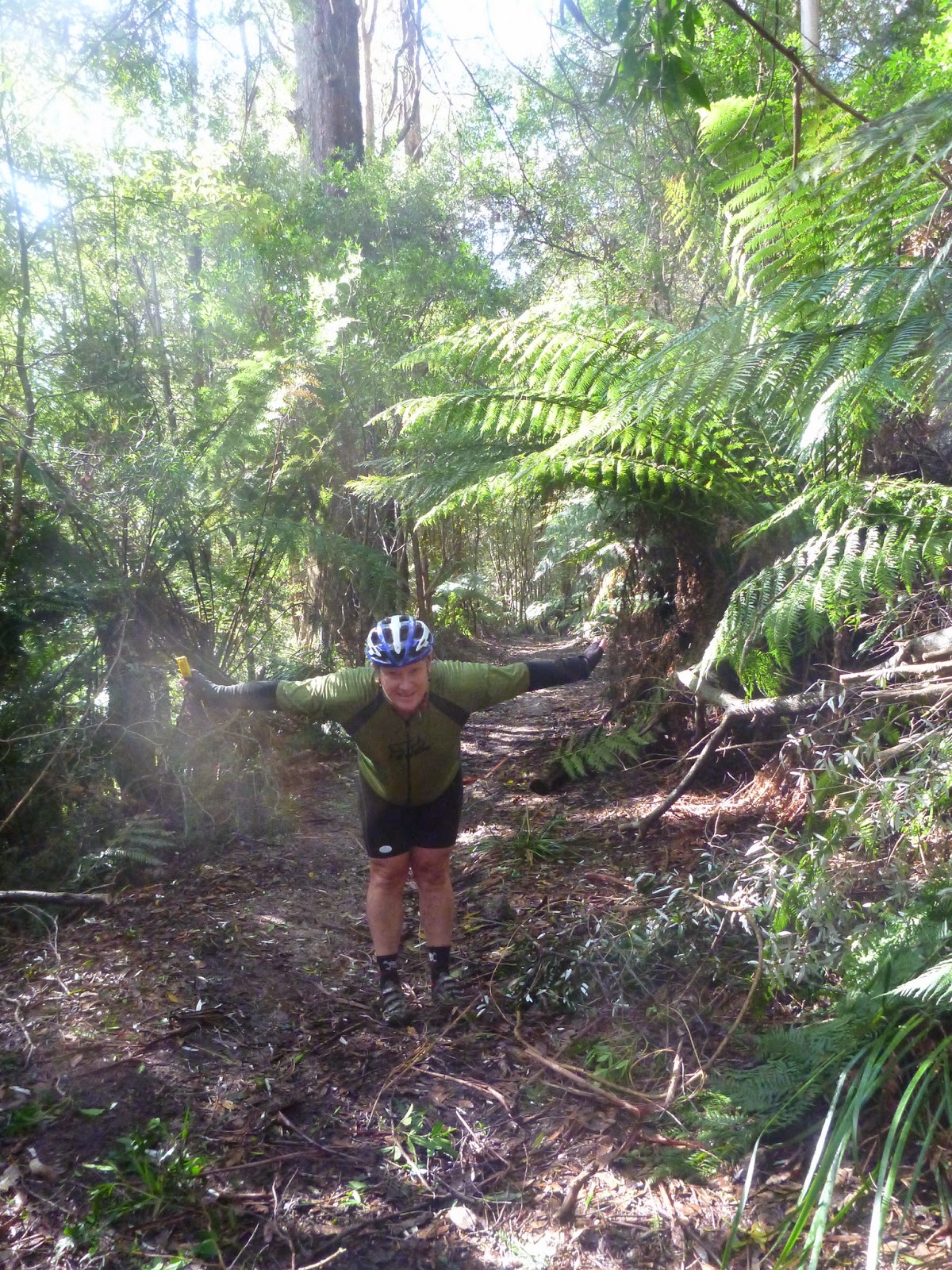 ... well, when I say "we", I actually more mean "me", because Kim felt she needed to capture the first moment in history that she could recall where I actually did some work and so she spent the time taking a ridiculous amount of photos of me cutting up a tree.

Unfortunately, my good deed was not rewarded by the cycling gods as it was just before we got to the first creek crossing at the bottom of the hill that my chain (which I might add had less than 250kms on it) snapped, leaving me to be very thankful I parked my car where I did as I coasted and pushed my way back along the last little bit along the creek to where I'd left it. 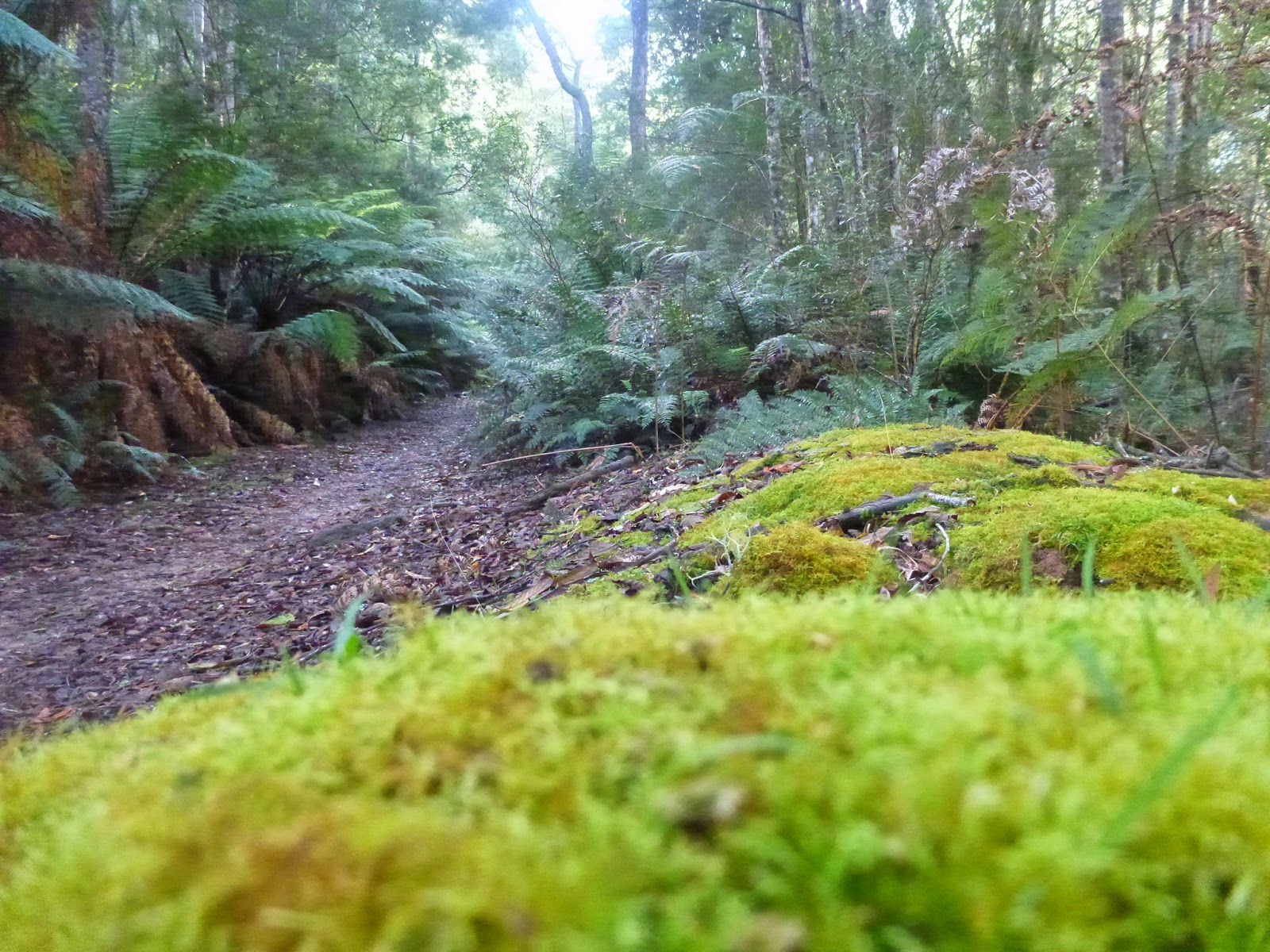 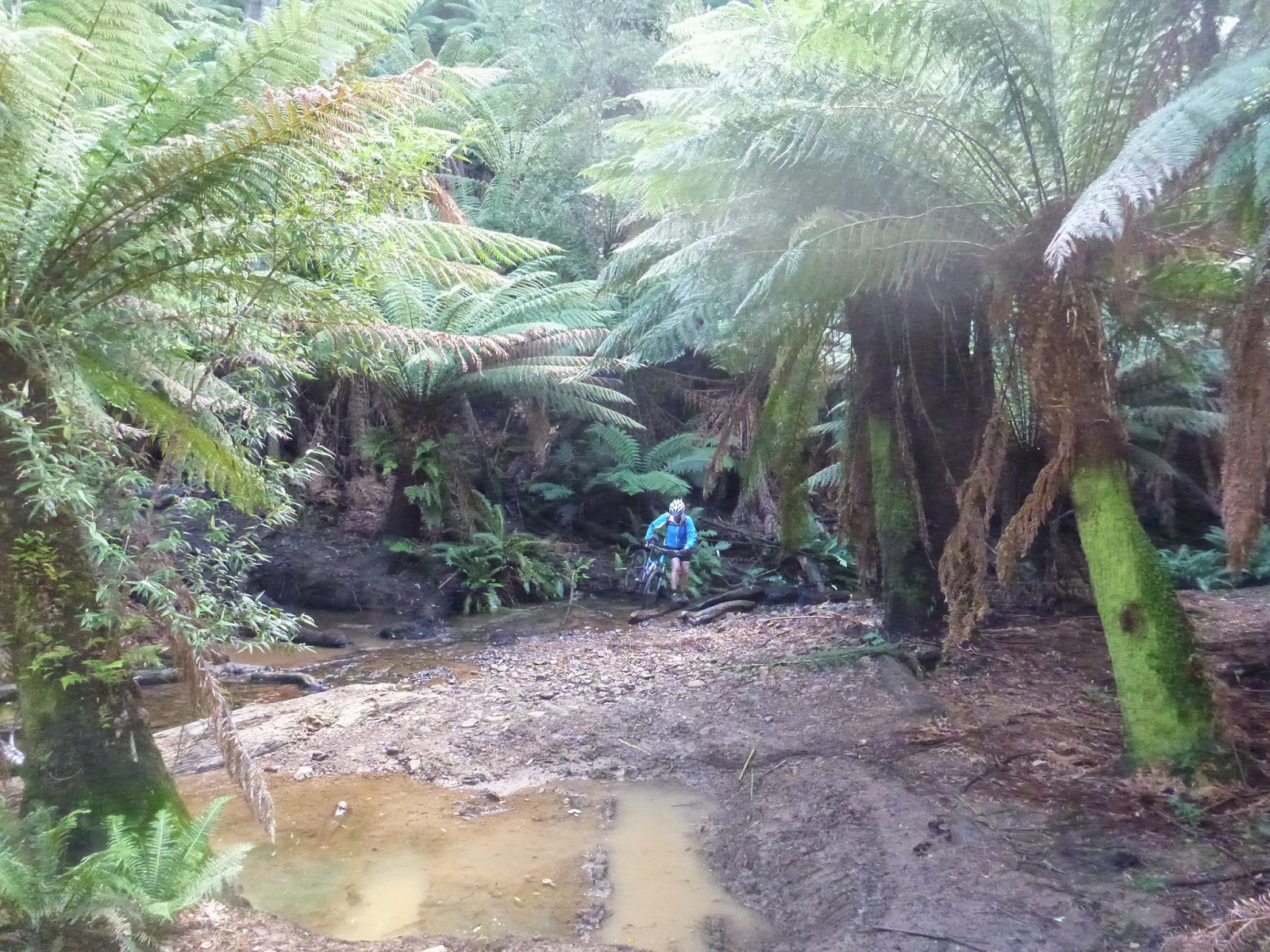 Unfortunately, this little mechanical meant we didn't get to do the section along the Leven River, but we did get to go and get Kim's ski early and I got to watch Kim expertly paddle it up and down the river demonstrating (a) how she is going to beat me in the icebreaker and (b) that I am better off spending my money on bicycle bits than on life insurance policies for my girlfriend ...

Not that I would do that.  No siree.
Posted by Tassierambler at 16:00