In terms of "first world problems", I think one of the big ones is the discovery of unexpected trails ...

You know what I'm talking about right?  you head out for a ride, you've got this perfect (if somewhat ill defined) route in your head and everything's humming along nicely ... and then ... there it is.

An unexpected trail meandering off into the distance ...

Another trail to be explored and suddenly you're left with an anguish filled dilemma ... do you stick to the plan or do you check out this new trail? 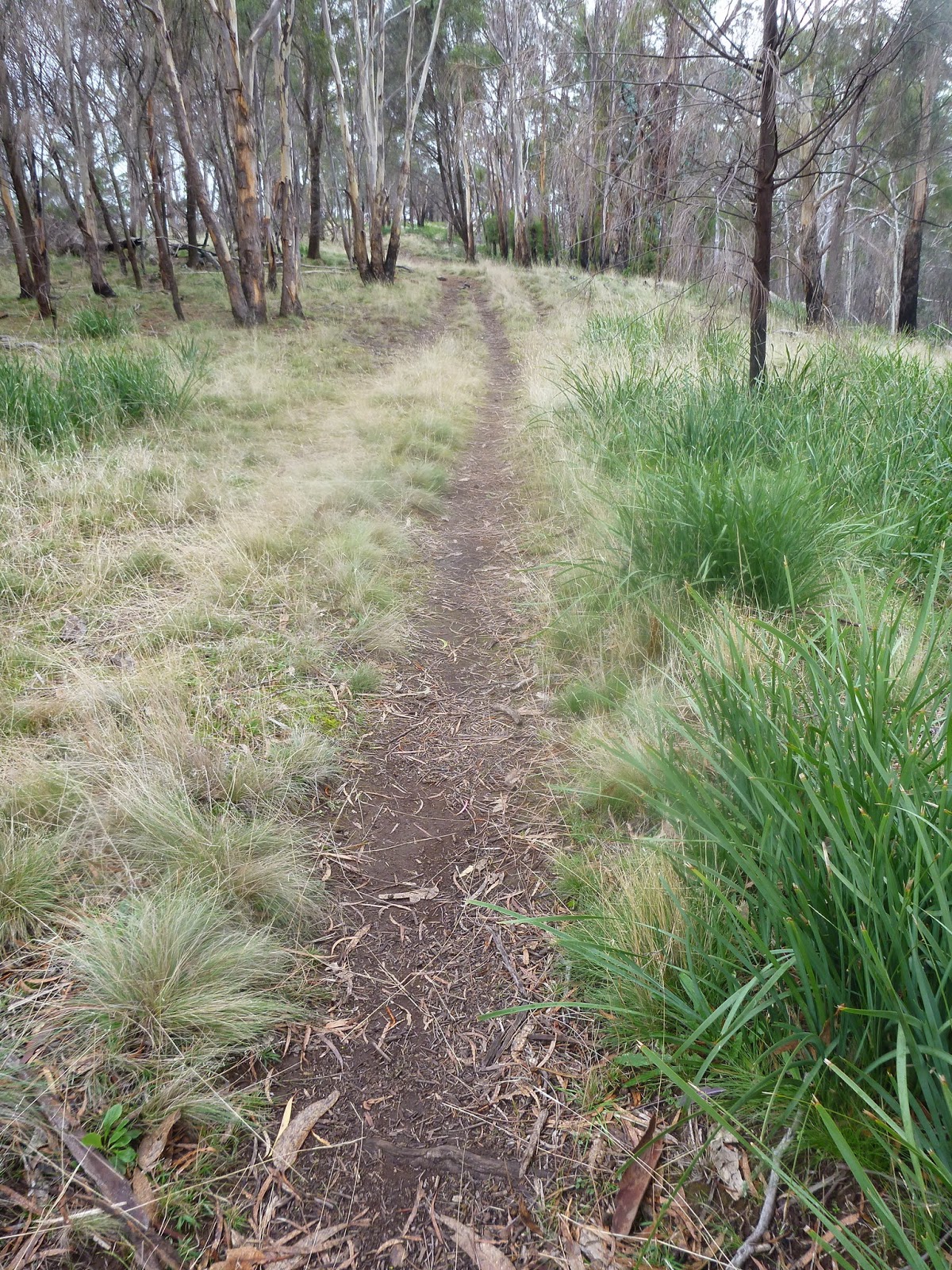 I can picture each and every one of you leaping out of your chairs and screaming at your screen ... "yes, yes, yes ... finally we have someone that is prepared to talk about the big issues that impact on us all... the unexpected trail."

Now I did figure out a sort of solution to this problem several years ago (and it wasn't a support group where we all sat around saying "Hi, my name is John ... I've not ridden past an unexpected trail in 35 days".)

No, my solution was called the Friday Frolic and in simple terms it entailed heading off for a ride after work on Friday and every time I came to a track I hadn't ridden before ... I had to go down it.

It was a great way of getting to know the trail network around Hobart ... and for ending up in scratchy, dead ends, usually with a big push back uphill to the junction. 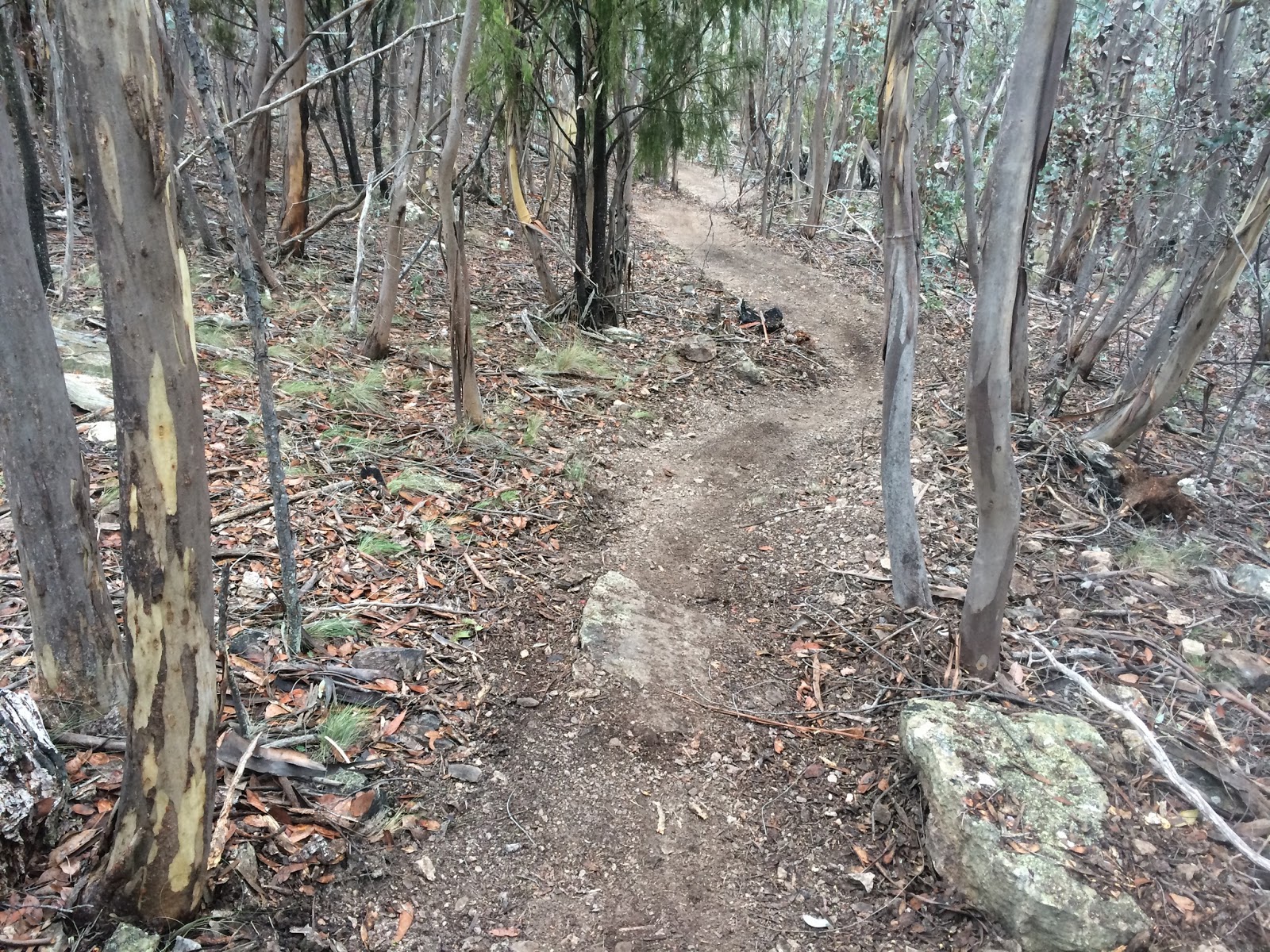 Ah, where was I?  yes, that's right - the injustices of the trail gods in providing too many trail options ...

If my rides were still uploaded to strava (which they're not thanks to the evils of strava heat map) those that follow me would be forgiven for thinking that I'm becoming rather obsessed with exploring the network of trails on the Eastern Shore.

I was there last weekend, I was there at 5.55am on Tuesday morning (I say 5.55am because it sounds so much more hardcore than 6.05am which was, in truth, when I actually got there) and I was there again today ... just riding up, down and around every trail I sort of knew about or had glimpsed on thelist.tas.gov.au trying to figure out if there was a sensible way of turning the Clarence Foreshore Trail into a Clarence Loop.

And to do this I've been scouting out trails around Mornington Hill, Natone Hill, Gordons Hill, Pilchers Hill and all the roads in between.

Today I wanted to see if my grand loop might not be better routed if I headed from Mornington Hill into the Meehan ranges and then over flagstaff hill into Pilchers Reserve (rather than the easier route around Gordons and Natone Hill).

I also wanted to check out some of the new trails that are being built for the Meehan Monster and a few other trails around Pilchers and Gordons Hill where ... you guessed it ...  I had come across trails earlier in the week which I had to go back and explore.

Let me start by saying that, ignoring the steep ascents (I did it twice from two different directions, because again ... there were all those junctions and trails I had to check out) it was a brilliant route with lots of gorgeous track and wonderful views.

Quick photo montage of the day ... 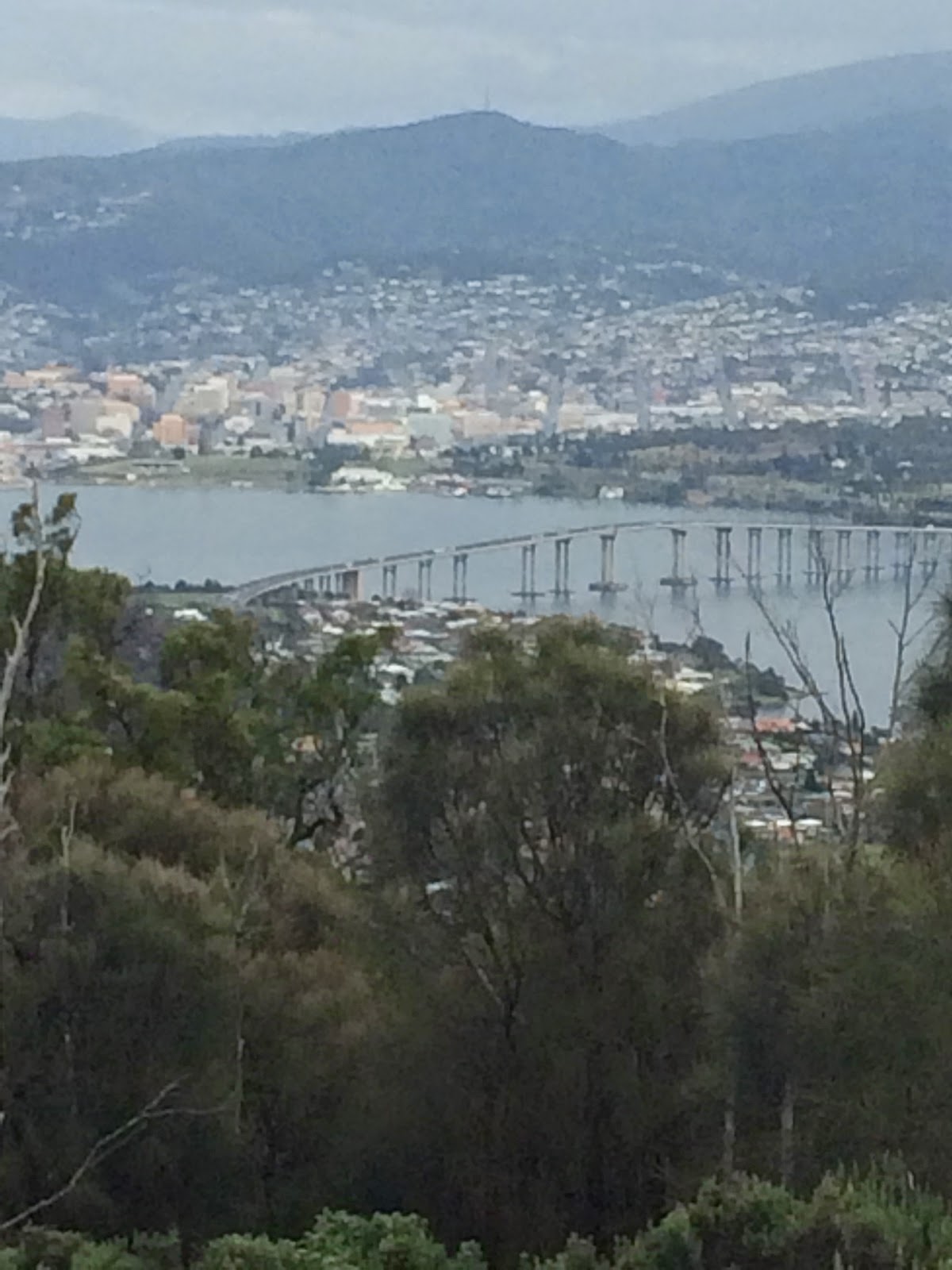 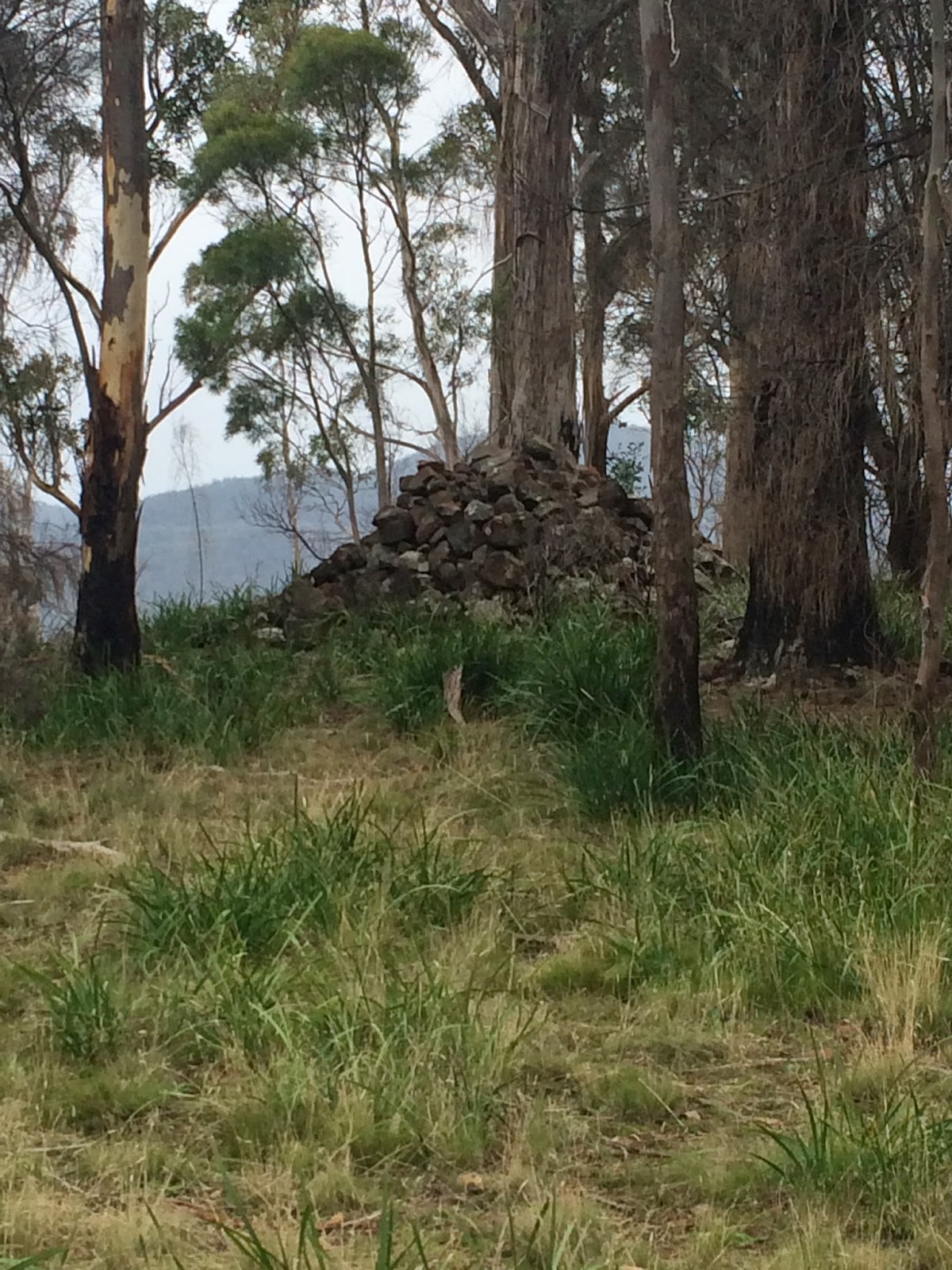 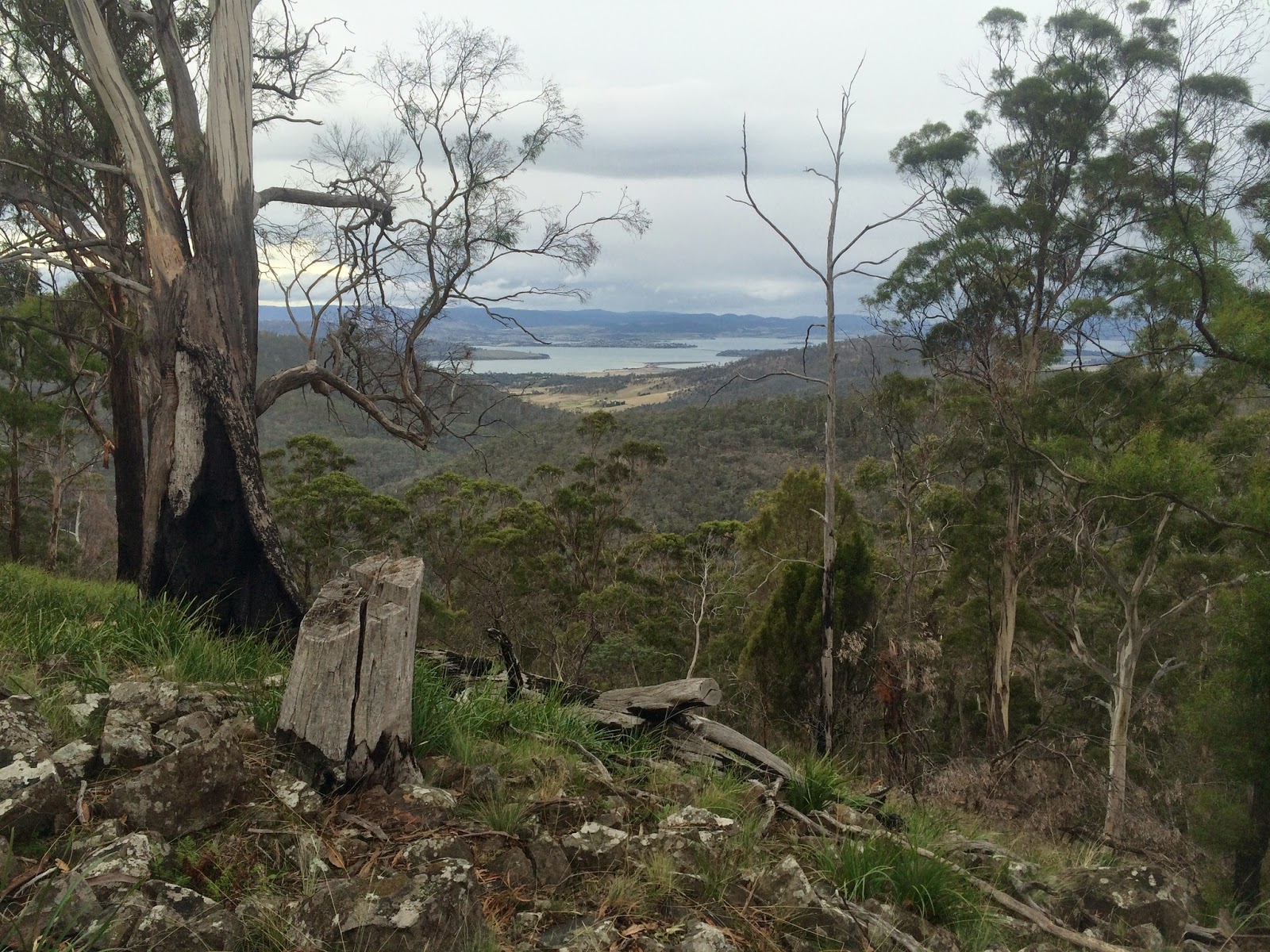 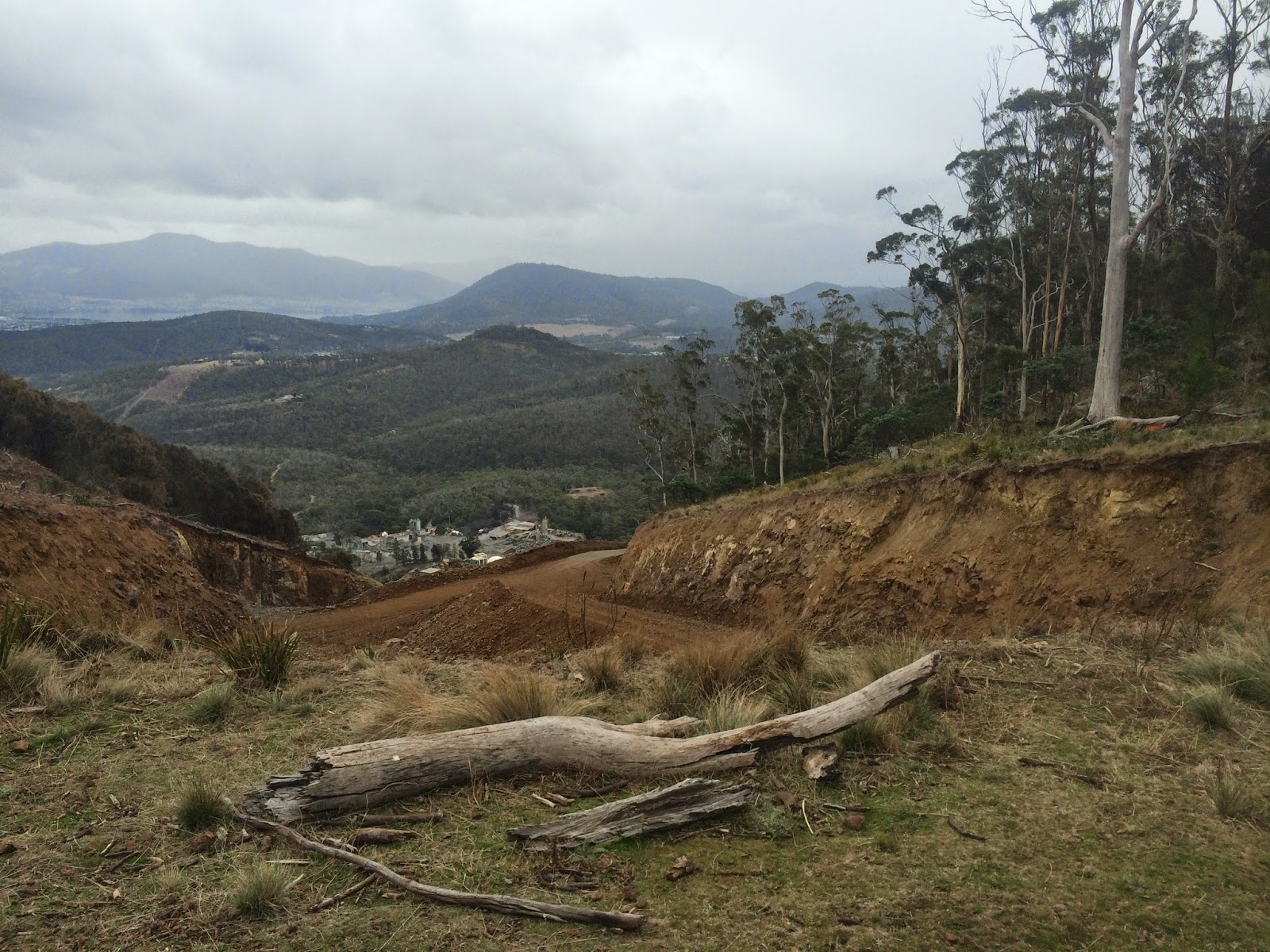 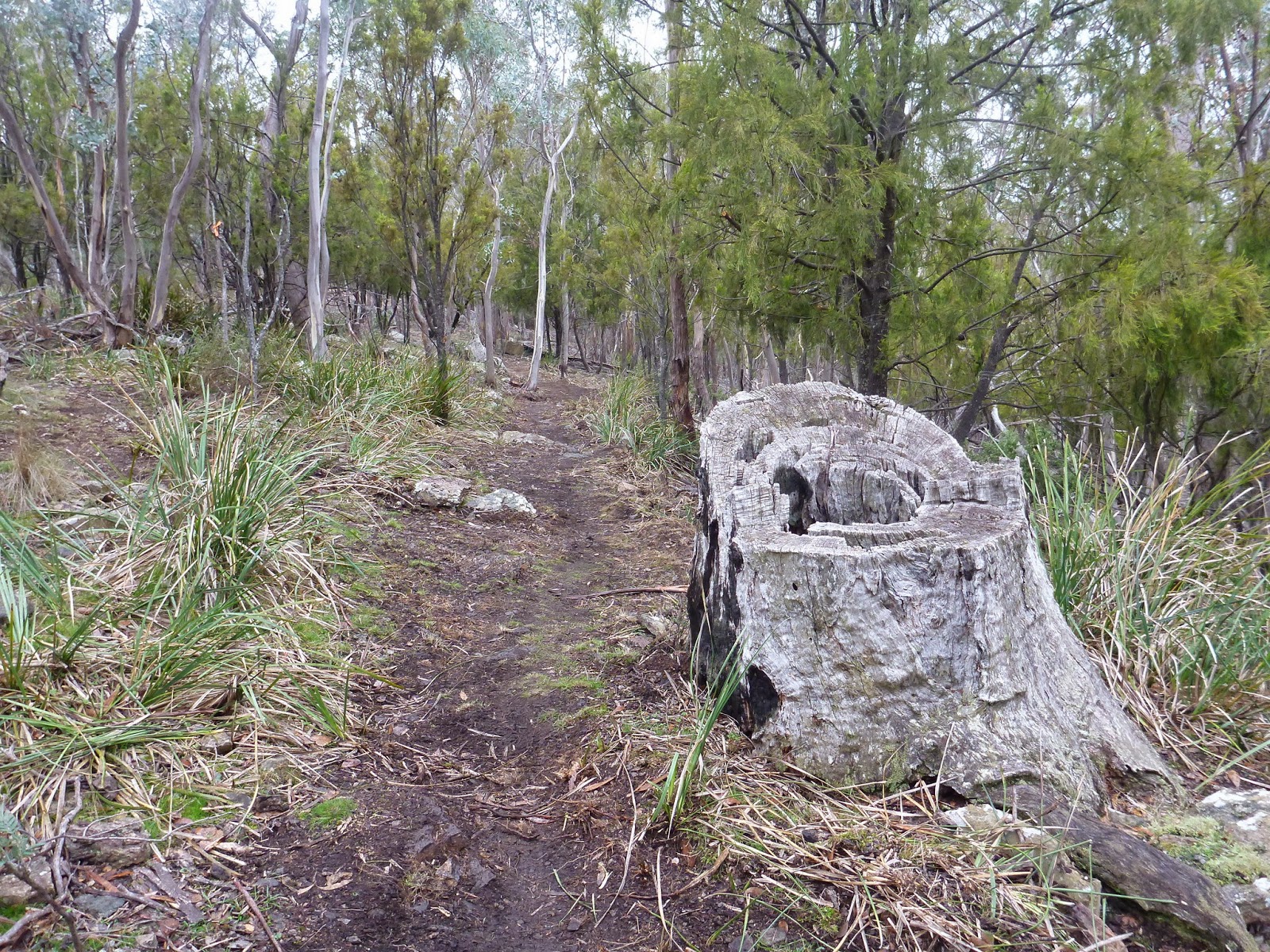 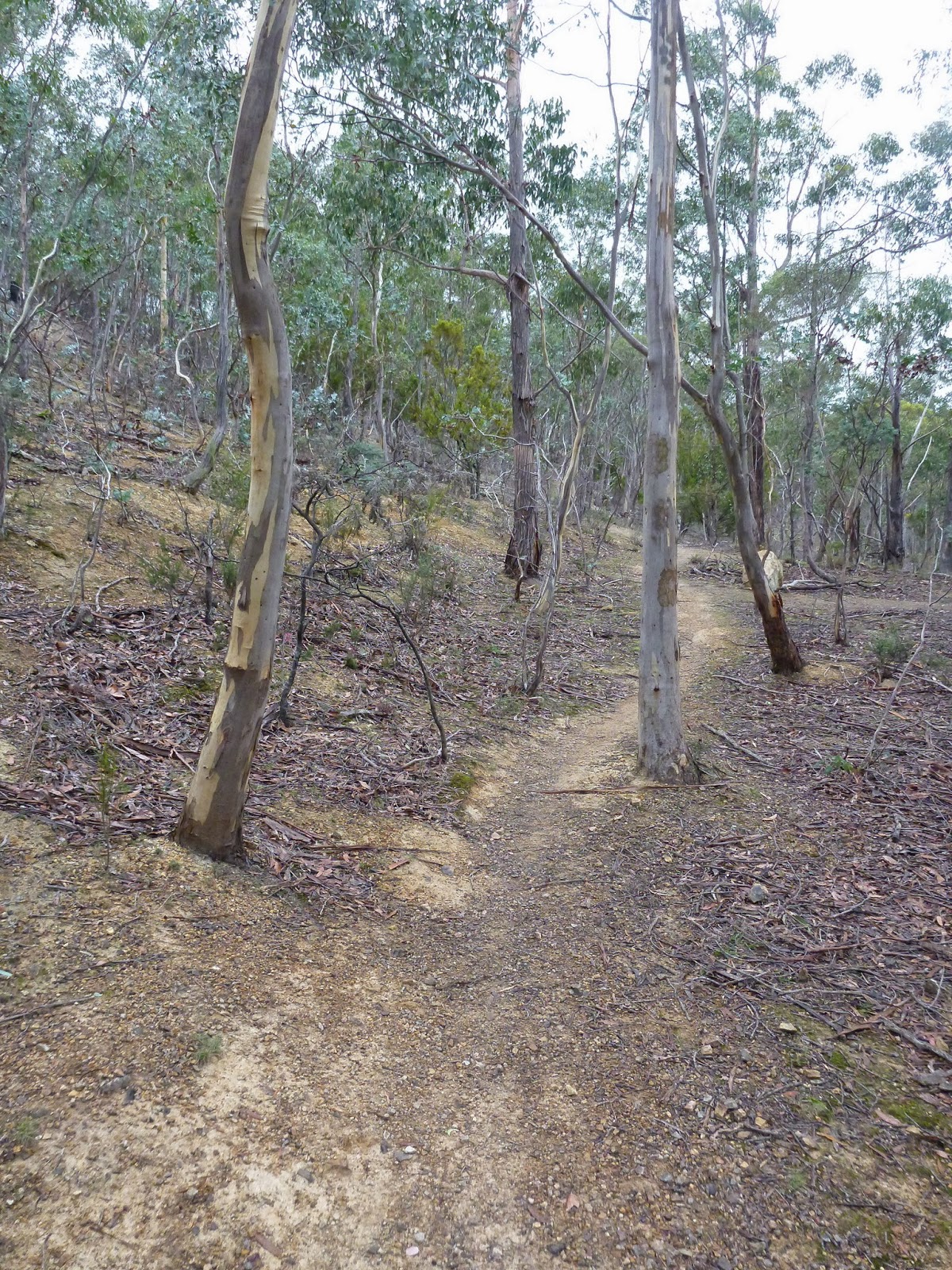 As I say this dilemma of having to explore unexpected trails is a real and genuine first world problem.

1. The new trails up in the Meehan Range are awesome, especially the new Golden Hill trail, and loving the new switchbacks up out of Belbins. 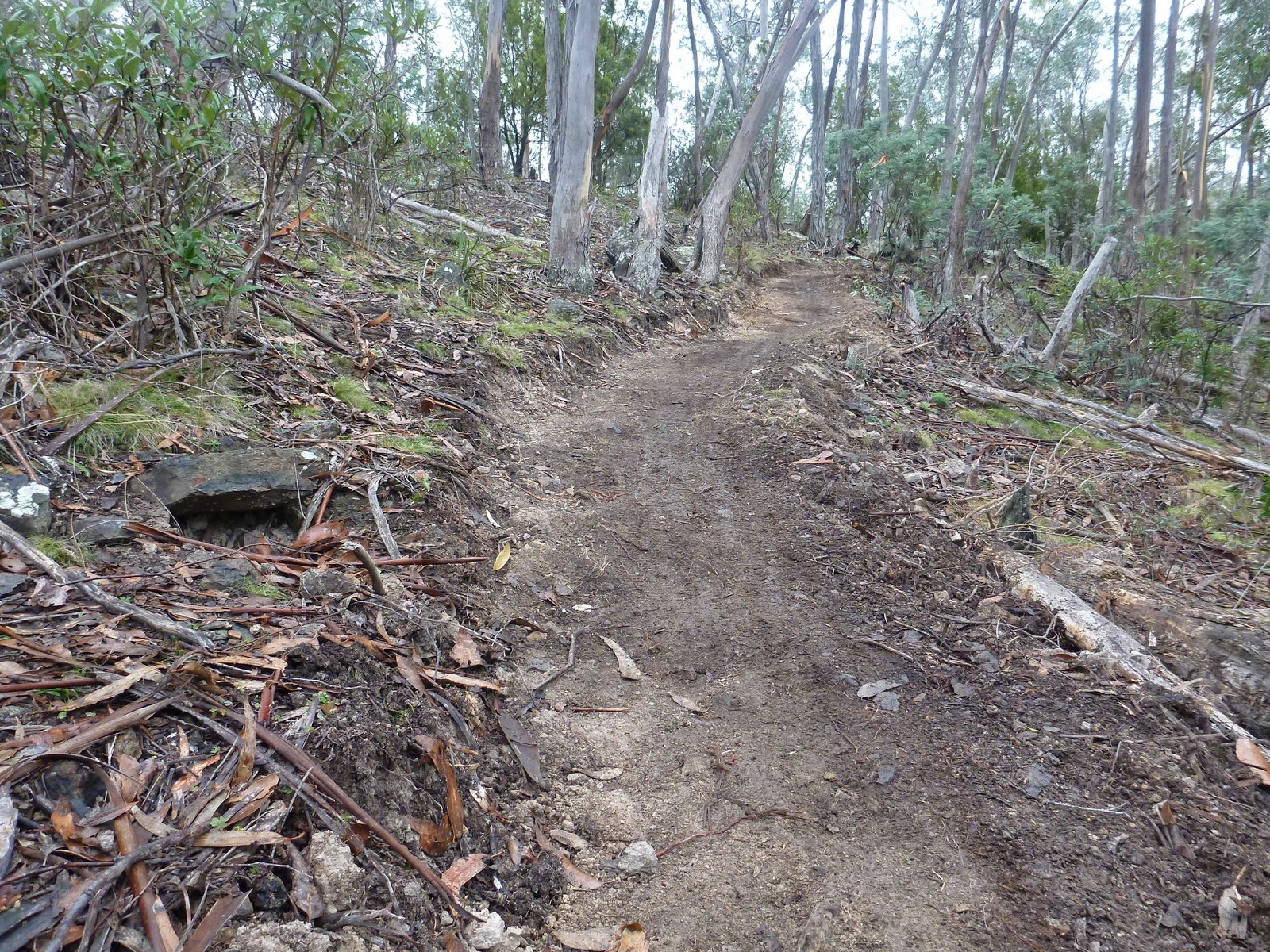 2.  I'm still a sh*t rider ... for example I found a new section of track over the back of the range which has a few log obstacles on them ... There are some photos of them below, not because I wanted you to necessarily see them, but because it gave me an excuse not to have to try and ride over them ... 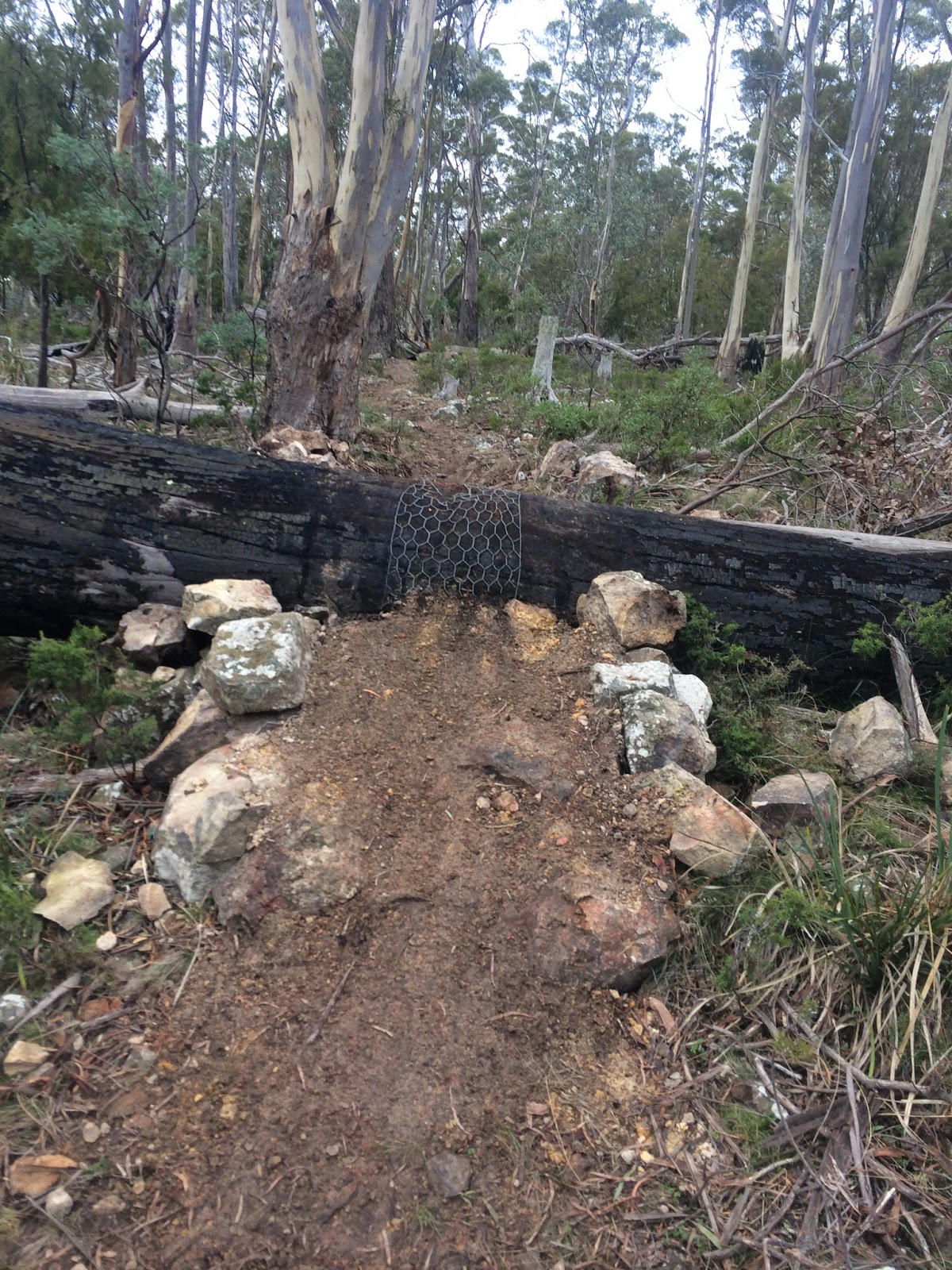 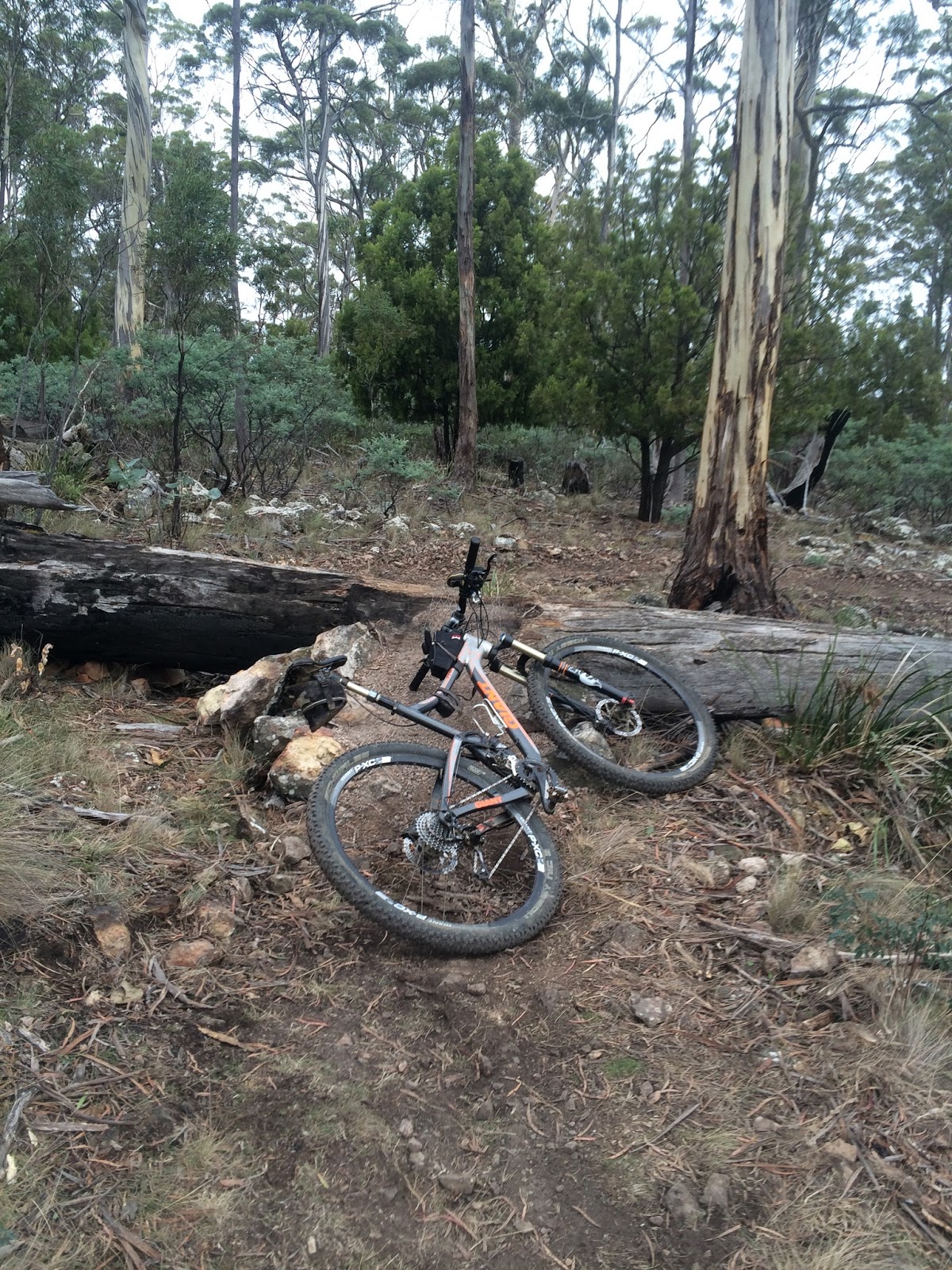 I did however ride up a set of five steps down near the TAFE later on after being inspired by a video I saw of a certain Mr Brookfield doing some real stair climbing on his bike.  On the scale of technical achievement my step climb was probably a 2 out of 5, but I was still pretty happy about it and gave myself two bonus points for giving it a try making it a 4 out of 5.

3.  Flagstaff Hill (which I noticed is incorrectly called Rocky Tom on some of the older 1:25000 maps) is an awesome link over to Caves Hill and Rocky Tom and then down into Pilchers Reserve.  I will caveat that by saying that by "awesome", I mean it's a lung busting effort (or in my case push) up from the main Meehan Fire Trail to the top of Flagstaff Hill and then a short, but gorgeous ride along the top before a 90% fun, 10% terrifying descent back down to the Caves Hill junction.  The 10% terror was when I hit a bit of slick rock which was more like ice than trail and went on a rather scary slip and slide that could have ended very badly if luck hadn't been on my side. 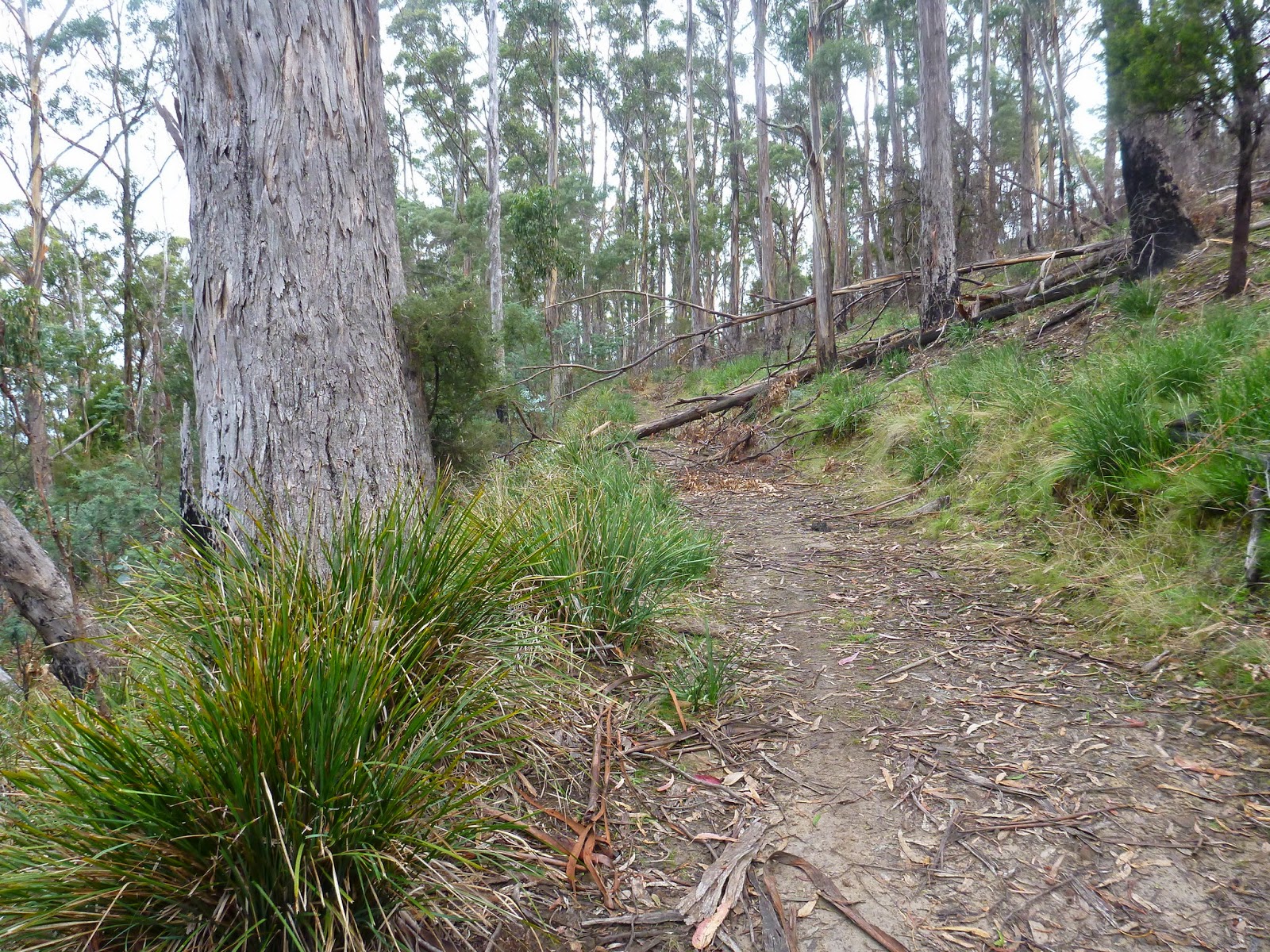 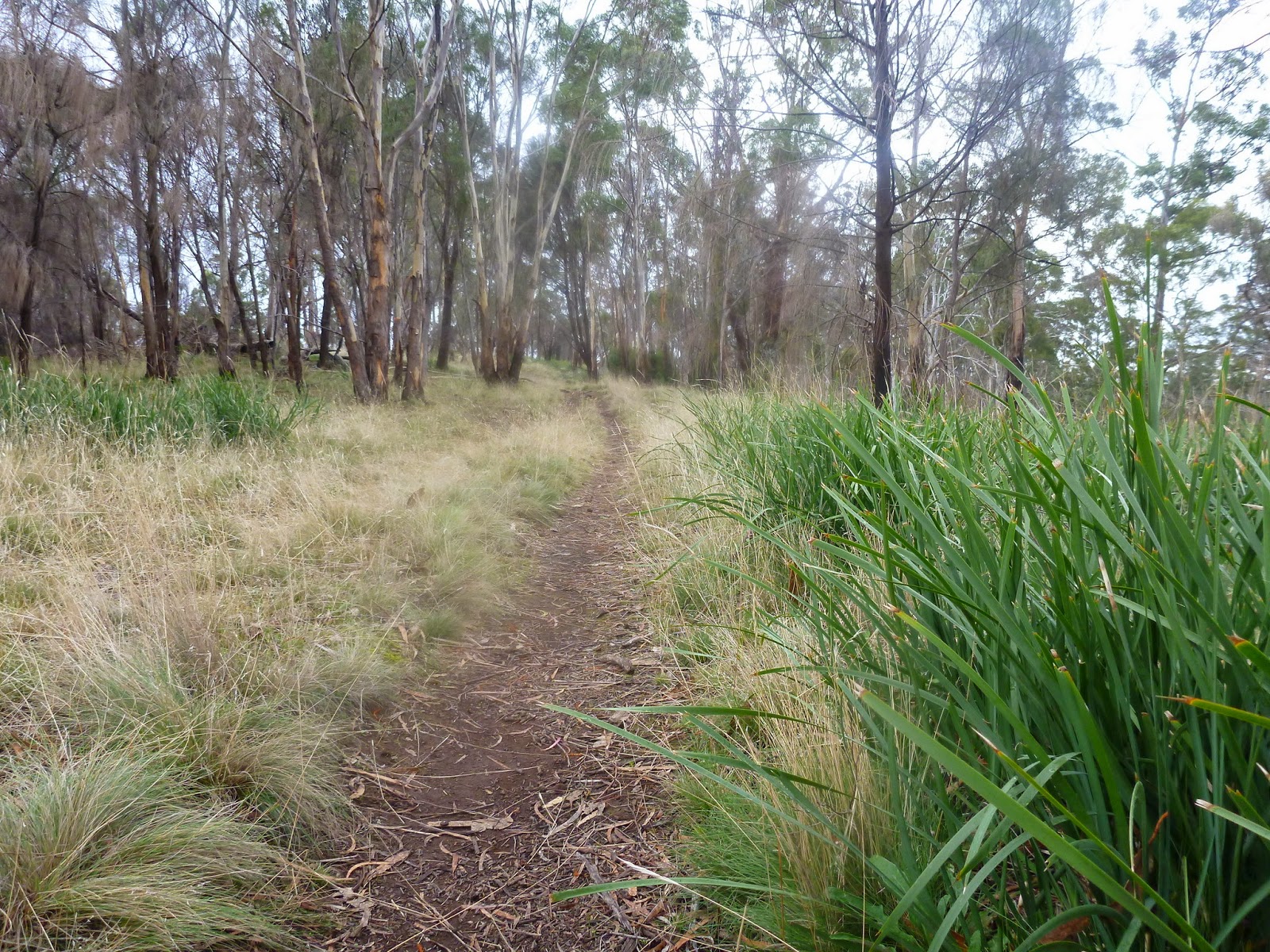 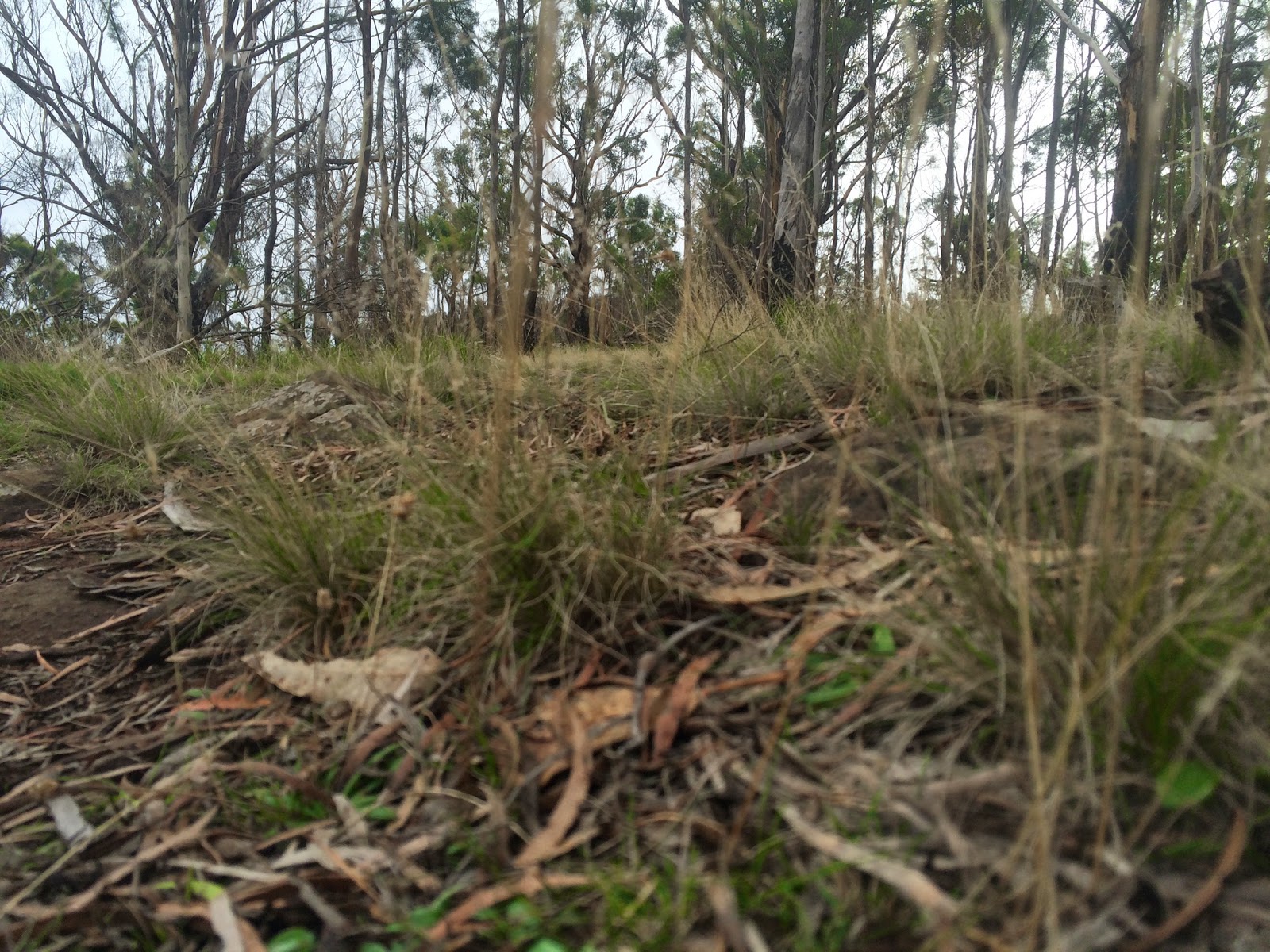 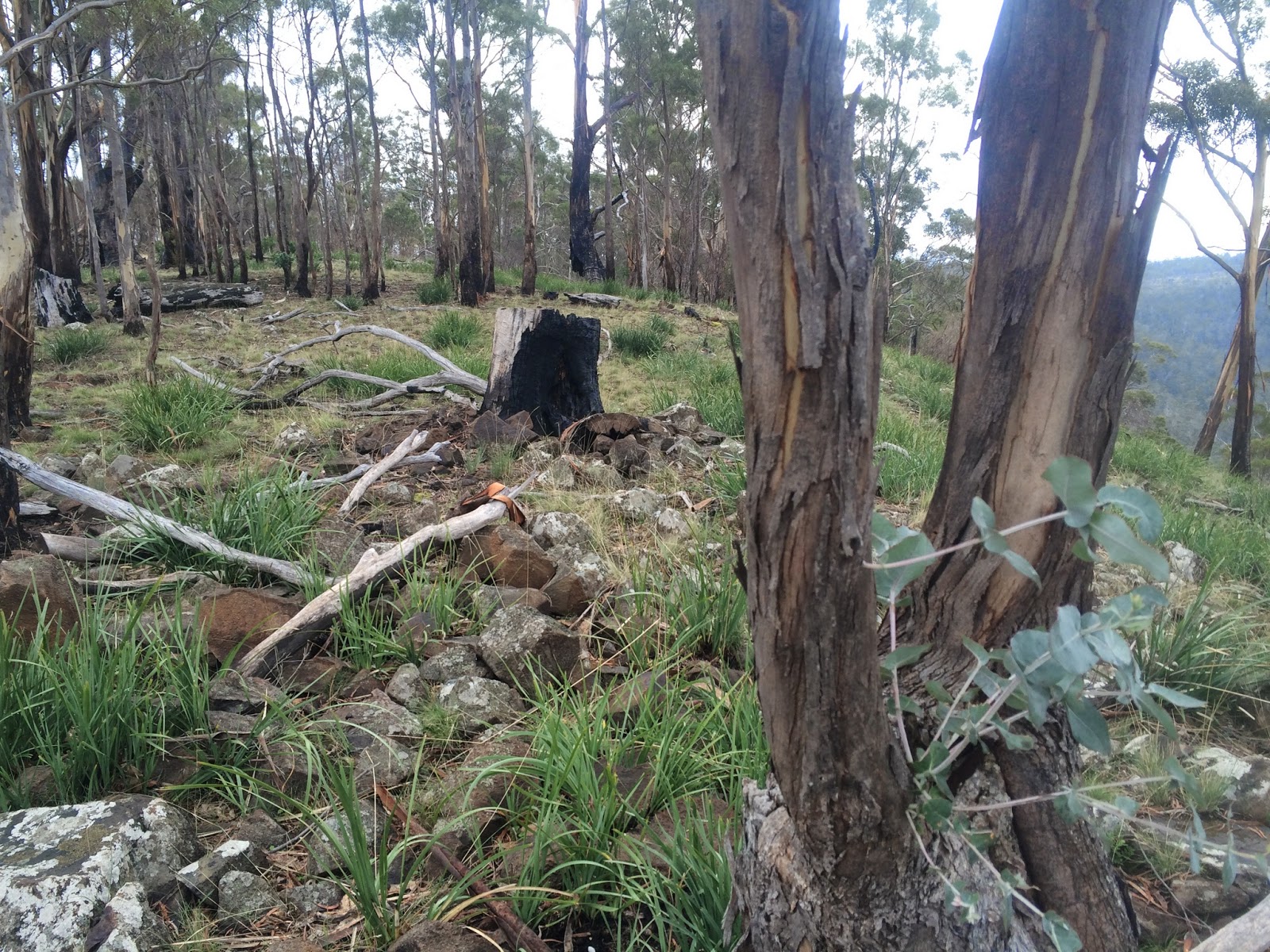 4. The new fence which I'd heard had been put up along the bike trail many of us use alonf the Tasman Highway next to the new retirement village is really the equivalent of a fishing net for cyclists ... it's very hard to see ...


but fortunately it's not a show stopper (well unless you don't see it until it's too late) as you can just ride along beside it ... 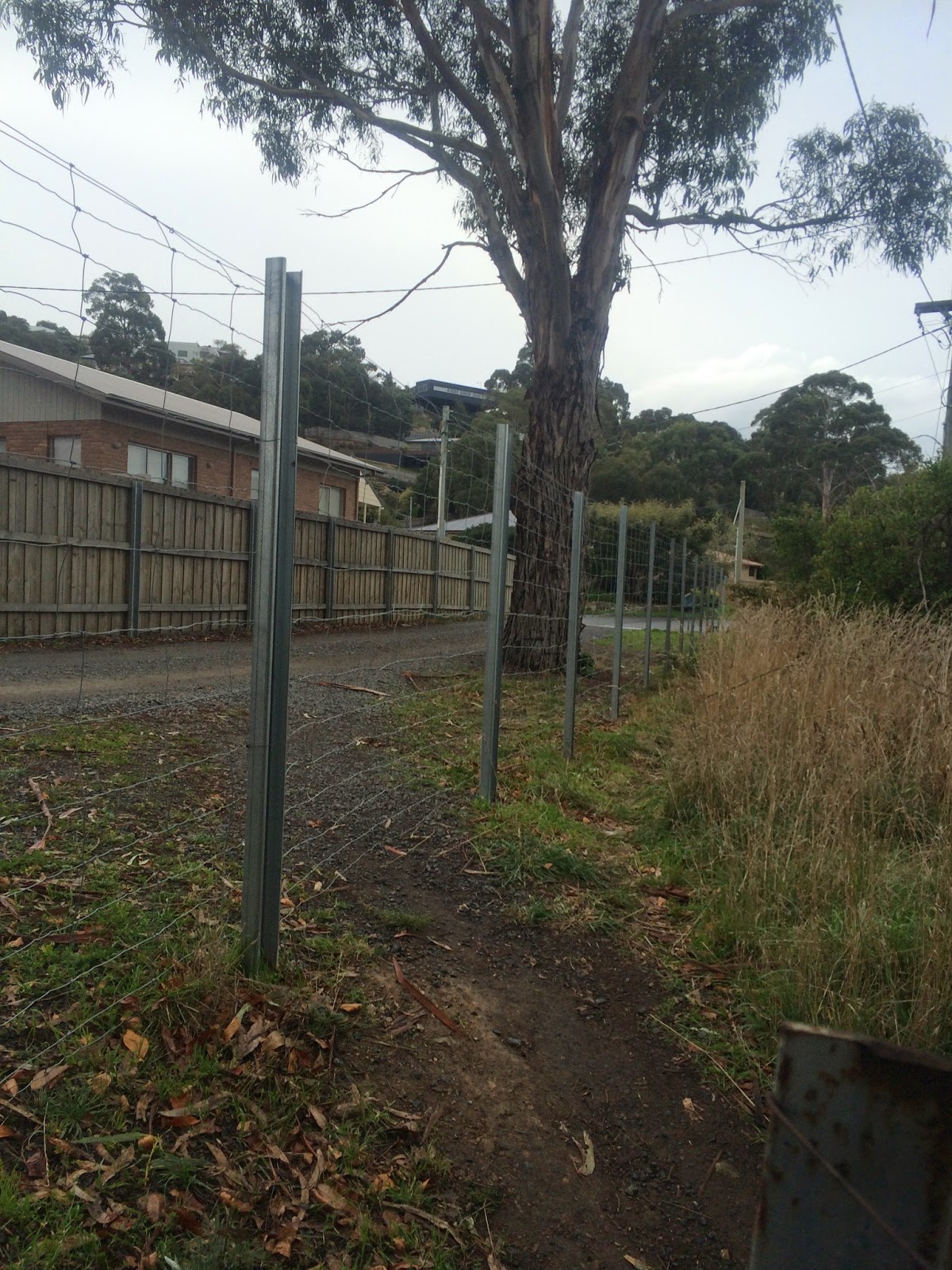 So now that I've got to the end of this post, I'm feeling it's a little harder to justify my initial diatribe about the first world injustices of all these new trails, but as I am a firm believer in justifying my opinions over admitting that I might be wrong, I shall just point out that it's now past 8am on sunday morning and I started writing this post around  5am ... so a good two hours of that time was spent uploading GPX tracks and creating the maps for all these new trails (Imagine if I actually spent time reading and editing these posts as well ... I'd never get them out).

Now I have to try and update the Meehan Ranges (Belbins Road) trail notes over on www.tassietrails.org before lunch so I can get out for another ride ...

Do you now see the first world heartache that all these new trails cause me?
Posted by Tassierambler at 15:00