I'm not expecting that anyone is actually thinking about this, but just in case, I haven't forgotten about my rather rash New year's resolution decision to ride 5000km this year ...

And it got off to a really good start with that initial spurt of enthusiasm you have with these challenges.  I even knocked off a secondary goal of riding to and from work for five consecutive days in early January.

Then I got struck down by a really weird foot problem - sort of like gout, but not really, and the end result was I spent the best part of three weeks hobbling around not even being able to put cycling shoes on it hurt so much.

I was sorely tempted to give up at that point, but over the last few weeks I've clawed my way back into the challenge by slotting in as many short commutes as I can (even when I drop off the kids at school, I'm now parking on the Eastern Shore and riding into work ), I chalked up an almost-century ride last Sunday, an epic "I can jump puddles" ride through the worst of last Monday's downpour, and a few "Oops, I forgot to turn right at the bridge" rides (which means I then have to ride to the Bowen Bridge and back again).

The net result of this little push is that I'm actually ahead of the ever moving goal ... 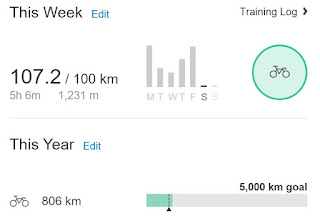 I've signed up for Nic's Cradle Mini Challenge (66km) next weekend to give me something fresh to aim for, and in the meantime I just keep aiming to chalk up at least 100kms a week to build a bit of a buffer for the challenges that are still bound to come ...